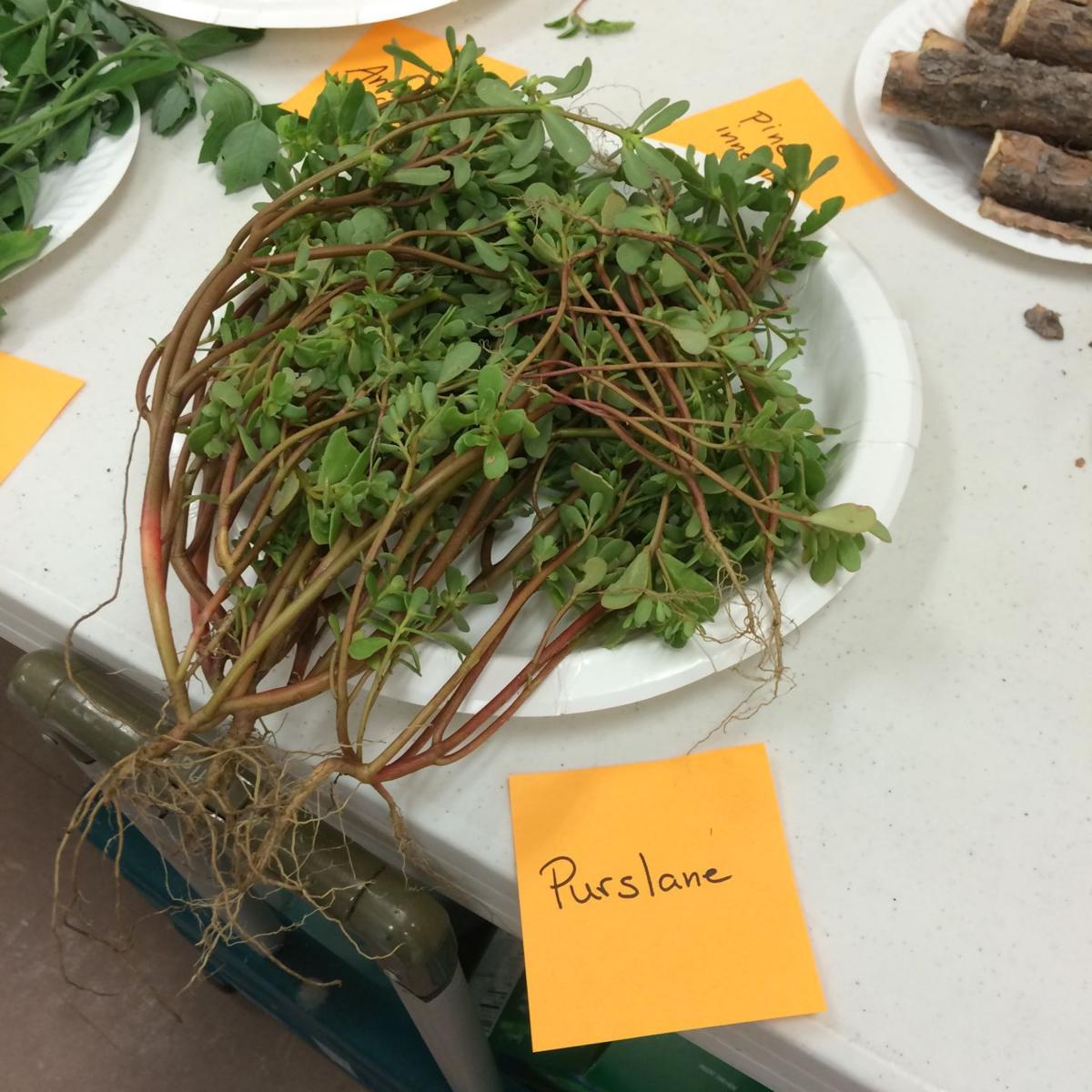 This “weed” is found in just about every yard in Payson and around the Rim, but harvest the leaves and you have a sweet, mild addition to your salad — just make sure they are well washed. 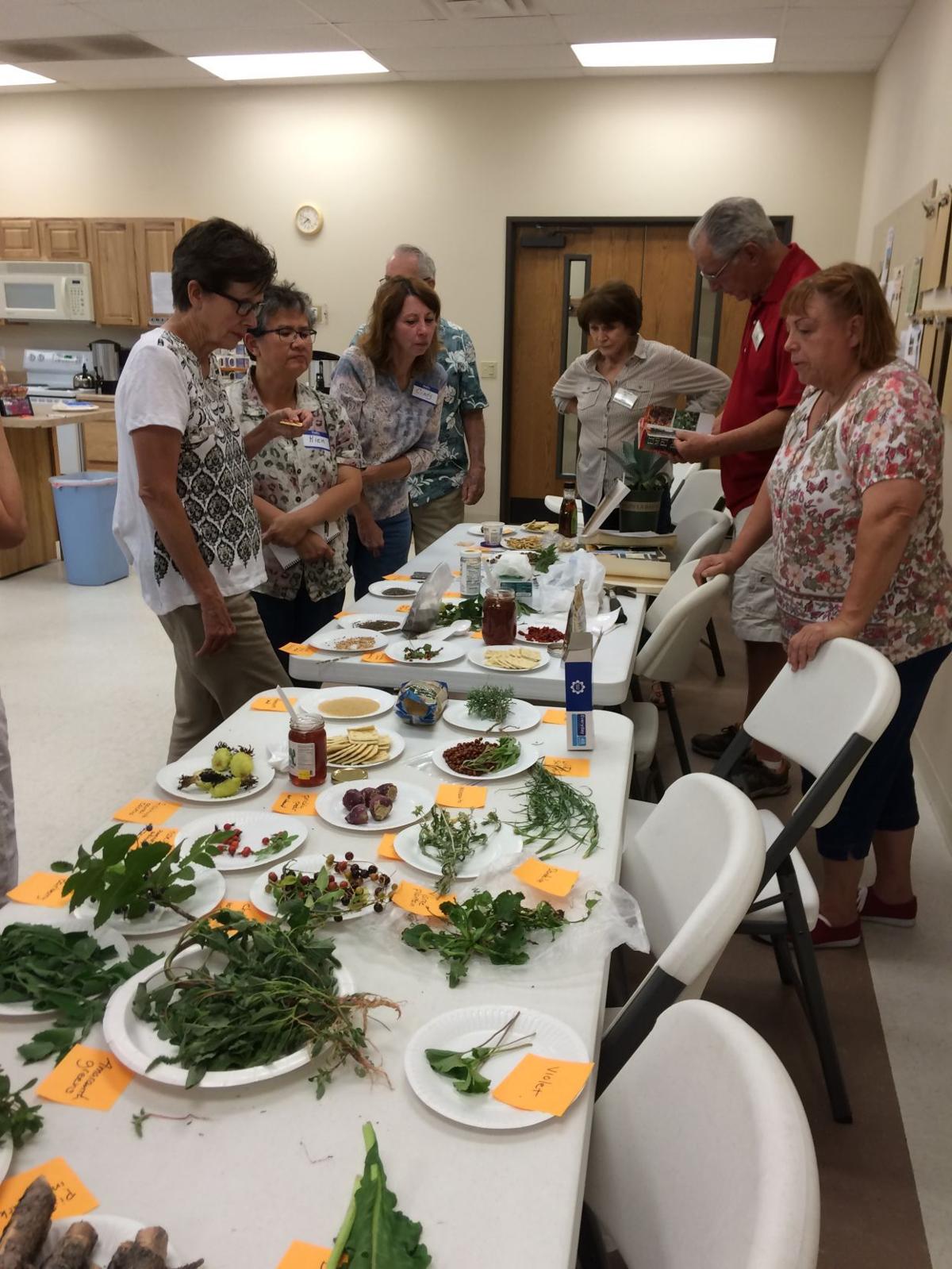 Members of the Rim Area Gardeners explore the display of edible wild plants prepared by Denise Van Keuren, at front right, for the group’s Aug. 14 meeting. 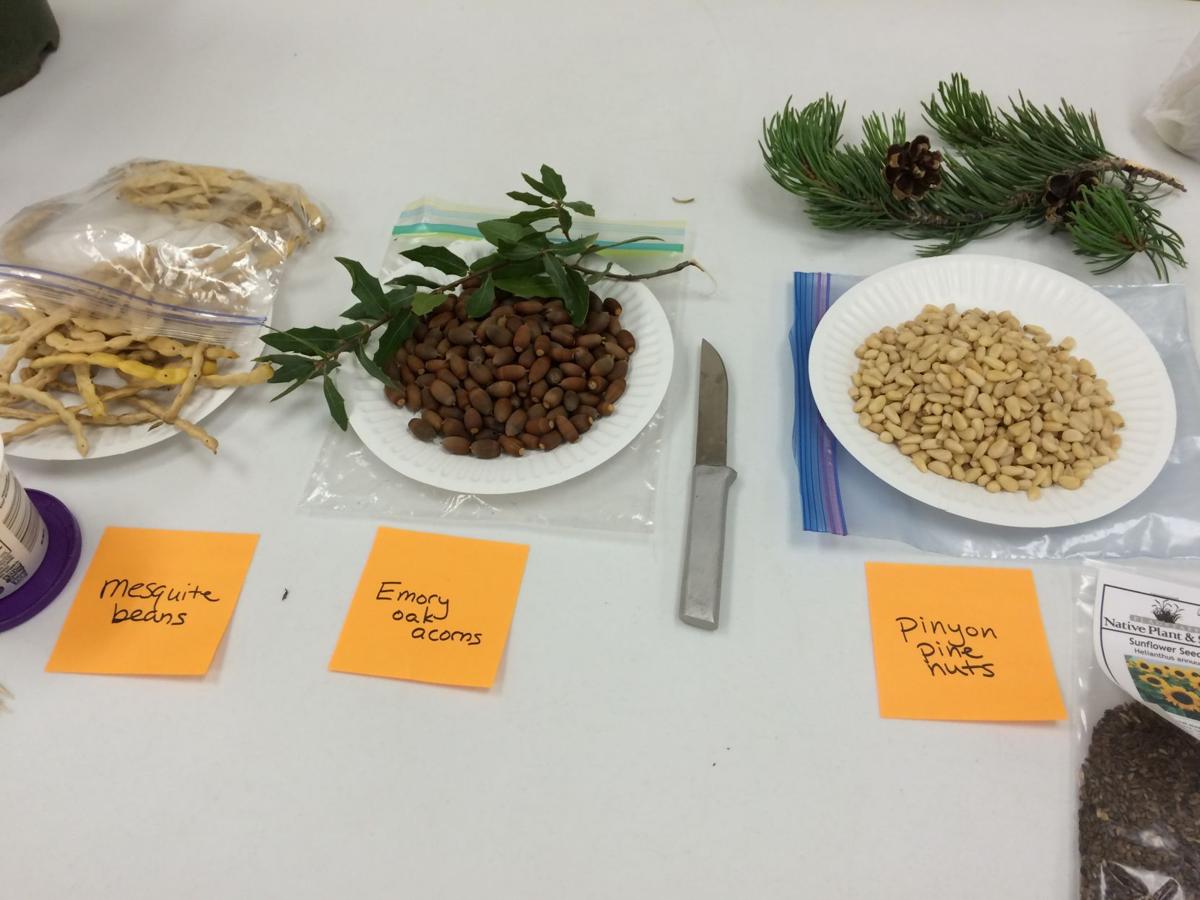 The acorns of Emory oaks (center), which grow in abundance in the Rim Country, are the sweetest native acorns and have soft, easily broken shells. However, the pinyon pine nuts (at right) are probably the more familiar of the edible wild nuts found in the Southwest.

All of Rim Country is a garden of beauty — the pines, the junipers, the sycamores, the wild vines, wildflowers, grasses, cacti and all those assorted weeds.

This garden can be harvested for crafting purposes — on recent weekends an intrepid vendor has been selling juniper benches in front of True Value on the Beeline. But this wild garden can also yield food.

Harvesting edible wild plants dates back to the paleo-Indians, Denise Van Keuren, a U.S. Forest Service retiree with expertise in plants and ecology, said during an Aug. 14 presentation before the Rim Area Gardeners.

Showing the abundance of wild edibles in the area, Van Keuren filled two banquet-size tables with samples of both plants found in the wild and commercial plants and products. Many of the plants she had collected on her own property, around the area and in the Verde Valley.

She noted some people might be allergic to wild foods, including mushrooms — so venture cautiously into the “cuisine.”

Native Americans often used these plants to supplement their own crops and products of their hunts.

“Field-grown by Arizona Native Americans were corn, squash, regular beans, tepary beans, agaves, annual greens and prickly pears. Many other plants were groomed in the wild to produce better. Even with collecting wild plants, growing plants and hunting, local paleo-Indian skeletal remains virtually all showed signs of periodic famine. The archaeological record shows depopulation of the Payson area between about 1280 and 1600 AD,” Van Keuren said.

They dried and stored much of the wild harvest, as evidenced by the huge granaries in the abandoned ruins.

The greens would need to eaten sooner rather than later and were best cooked with water changes. They dried or cooked many of the fruits, she added.

Van Keuren provided a list of sample foods that can still be found growing wild in the Rim Country and surrounding areas.

Emory oak acorns (bellotas), still sold commercially, the small, seed-like acorns produced by a majority of the oaks in the area have thin shells and sweet “meat.”

Agaves: Just before the stalk starts, Native Americans removed the leaves and roasted the ball of the plant, creating a sweet pulp. They could ferment the pulp and make alcohol or dry it for later use.

Seeds of amaranth and grasses (grass seeds include wheat, rice and corn).

Arizona black walnuts: These grow in abundance in Star Valley, she said.

Pinyon pine nuts: The cones open to release the nuts. The thin-shelled nuts will contain either a nut or oil.

Mesquite beans and chia seeds normally grow at lower elevations than Payson, but Van Keuren believes chia could be grown in this area.

The weeds we lament about this time of year also include many eatable plants:

Amaranth, goosefoot and other chenopodiums, including quinoa and lamb’s quarters;

Purslane — which some club members remarked can even withstand an onslaught of chemical weed killers;

Mustards and the young fruit of devil’s claw;

Some of these edible wilds were what she calls famine food — they would sustain a body in a time of need. These include juniper berries, which are ripe when they become dark; manzanita berries; and the inner bark of conifers. She said it is what the beavers eat to put on weight for the winter.

Arizona may be known for its deserts, but edible mushrooms grow in its milder climes. Van Keuren said the puffball mushrooms that grow in the area are edible so long as they are still white. At much higher elevations, usually in the fall after a fire, she can find morels, chanterelles and others. She strongly recommends anyone interested in learning about edible mushrooms and participating in foraging expeditions connect with The Arboretum at Flagstaff and the Arizona Mushroom Society first. “You really need to be with someone who knows what they’re doing,” she said.

She recommended several reference books, including one on edible mushrooms, “All That the Rain Promises, and More ... A Hip Pocket Guide to Western Mushrooms” by David Arora, published in 1991.

“If you can get only one mushroom book, make it this one,” Van Keuren said.

With Payson’s central location it is easy to visit two outstanding arboretums, The Arboretum of Flagstaff and Boyce Thompson Arboretum outside of Superior.

The Boyce Thompson Arboretum State park at Highway 60 Milepost #223 near the historic copper mining town of Superior is open daily from 6 a.m. until 3 p.m. During the rest of the year, the park is open from 8-5.

To investigate growing your own “native edibles” visit the Native Seeds/Search website nativeseeds.org or the Arizona Native Plant Society, aznps.com. One of the native plant nurseries on the AZNPS is the Rim Country’s own Plant Fair Nursery.

All That the Rain Promises, and More… A Hip Pocket Guide to Western Mushrooms by David Arora, published in 1991.

People of the Tonto Rim (Archeological Discovery in Pehistoric Arizona) by Charles L. Redman, published in 1993. Redman did a lot of work at the Shoo Fly Ruin site off Houston Mesa Road. The book is available in the gift shop at the Rim Country Museum and deals specifically with archeology in the Payson area.

Plants of the Sonoran Desert and their Many Uses by Don Wells and Jean Groen, privately published in 2006, check for it on Amazon.

A Field Guide to the Plants of Arizona by Lewis and Anne Epple, published in 1995. Van Keuren called it comprehensive and said it includes edibility information.

Edible and Medicinal Plants of the Rockies by Linda Kershaw, published in 2000.

Cooking the Wild Southwest by Carolyn Niethammer, published in 2011 and includes recipes.