The Wonder Beans perform during “Jack and the Beanstalk.” Read more about the play on page 18. 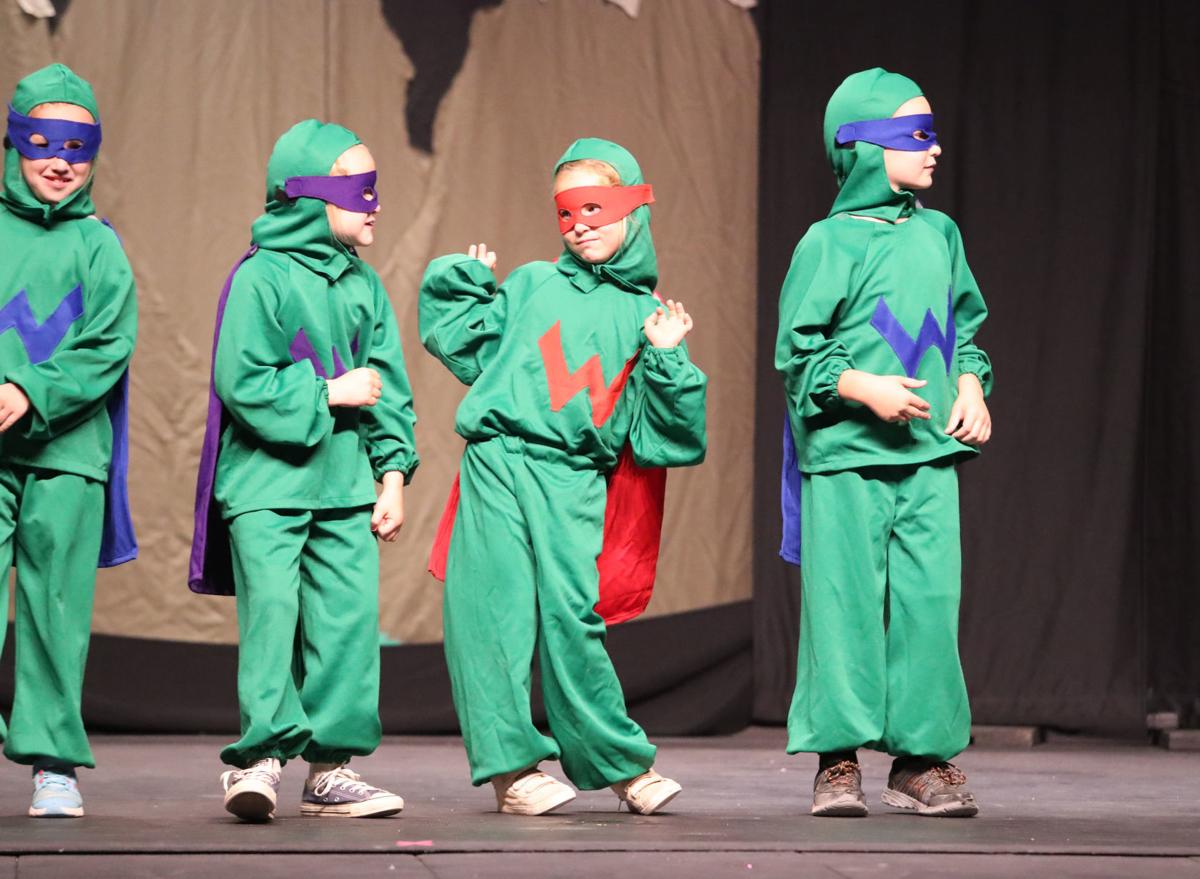 At left: Merchant No. 1, played by Savannah Hopson, and Milky White, played by Marissa Ormand. At right: Jack, played by Cody Hawley, and his mother, played by Ashlynd Whetstone, talk with P.T. Wonder, played by MCT Director Payton Hartwick. 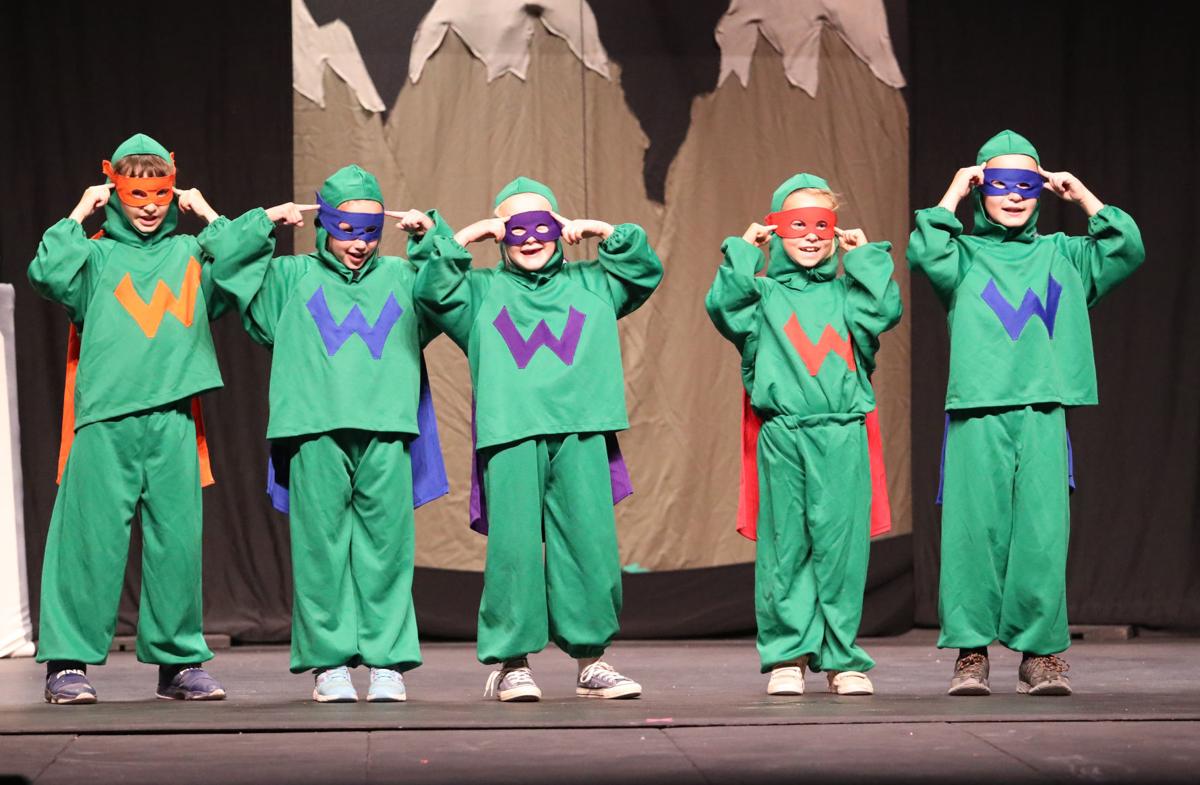 Some of the younger students portrayed Wonder Beans in “Jack and the Beanstalk.” 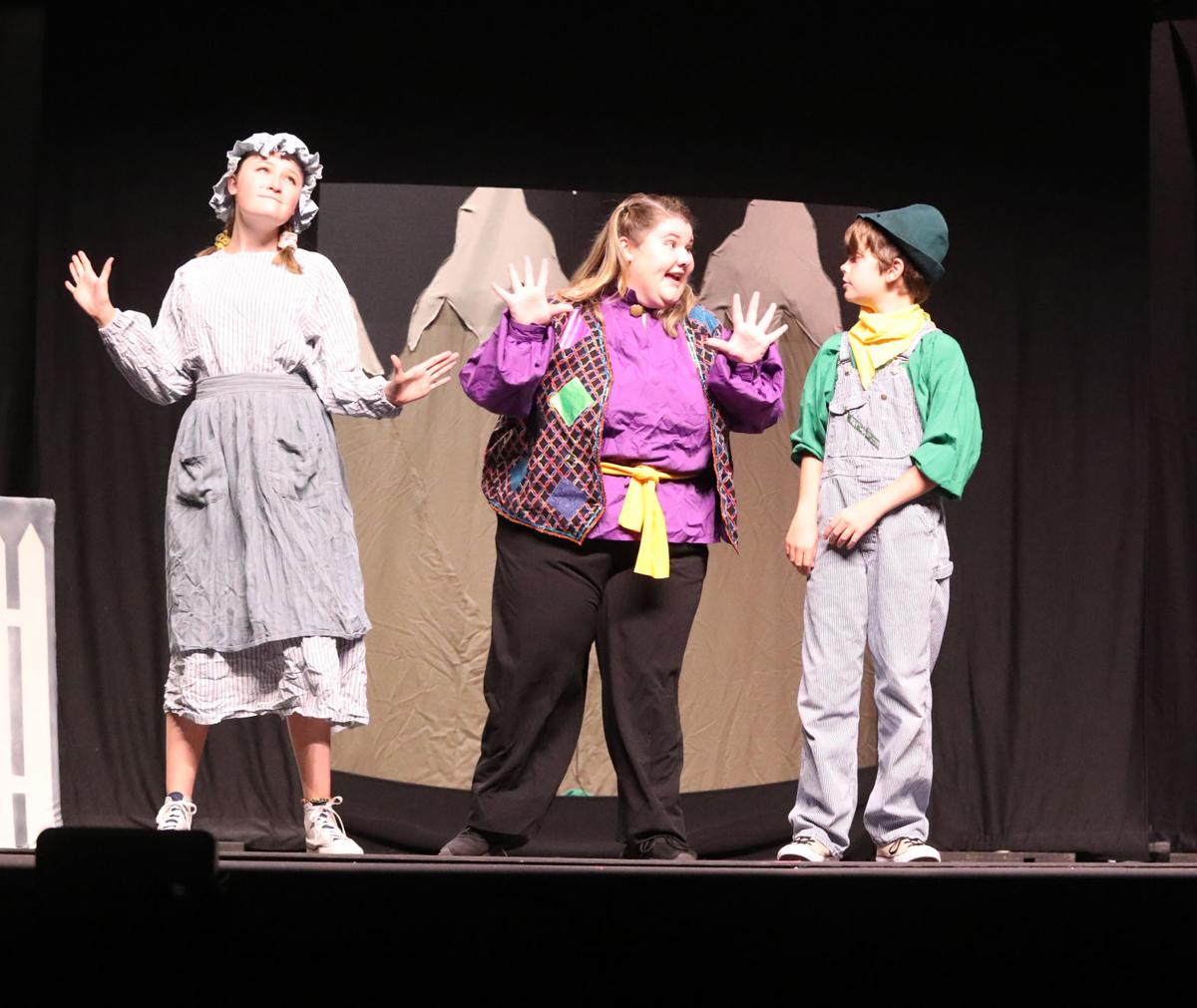 The Wonder Beans perform during “Jack and the Beanstalk.” Read more about the play on page 18.

At left: Merchant No. 1, played by Savannah Hopson, and Milky White, played by Marissa Ormand. At right: Jack, played by Cody Hawley, and his mother, played by Ashlynd Whetstone, talk with P.T. Wonder, played by MCT Director Payton Hartwick.

Some of the younger students portrayed Wonder Beans in “Jack and the Beanstalk.”

A wave of emotions washed over Kathy Siler on Saturday night as the curtain dropped on another Missoula Children’s Theatre production at the Payson High School Auditorium.

“As always, I have mixed emotions,” said the Payson High School theatre director. “It’s sad to see such a great, fun project end. This particular group will never be together again. Some of them will try out for the MCT show next year, but the group will be different.

“Also, I’m happy to see the project to completion and excited to start the next project.”

About 60 Payson Unified School District students took part in the MCT full-length, original, musical comedy production of “Jack and the Beanstalk” for two performances on Aug. 23 and 24.

This was the eighth consecutive year that the MCT has brought its “little red truck” loaded with a set, costumes, props and stage makeup to Payson for a performance. It’s a week-long residency.

MCT’s “Jack and the Beanstalk” is an original adaptation of the classic children’s story. MCT’s Taylor Sage Priday and Payton Hartwick directed the production.

“It was just enough to pay the invoice which is $3,750 each year,” Siler said. “That’s $3,450 then we add three workshops to make a total of six classroom workshops for the elementary schools, which is one of our community service projects for the local schools.”

Priday and Hartwick conducted those six workshops for elementary students during the production week’s school hours.

“MCT strives to use participation in the performing arts as a vehicle for children to develop the life skills (social, communication and adaptive skills, self-discipline, self-esteem, a strong work ethic, appreciation of the value of teamwork) necessary to answer the challenges of the present day,” MCT said in a press release.

Siler said she was pleased with how things went from tryouts on Monday afternoon to rehearsals to the performances on Friday and Saturday nights.

“The production week went very well,” Siler said. “Everybody worked together beautifully. Our directors included humor and team-building exercises that brought the cast members together as a team.”

It can be a challenge trying to pull together such a cast which included 60 first- through 12th-graders.

“It’s always fun to see the cast members enjoying each other and having fun with the project,” Siler said. “I’m always thrilled to see 12 different grade levels working together on a single project for the good of the group.”

Siler thanked four businesses that sponsor them every year — Ironhorse Signs, Miller Autoworks, Payson Premier Dental and Plant Fair Nursery, as well as, ArtBeat Rhythm of the Rim which is now a co-sponsor.

“We are a self-supporting project and we depend on their donations, along with ticket sales, DVD sales, concession sales and Credit For Kids donations to bring the Missoula Children’s Theatre back each year,” Siler said.

You can support the continuation of MCT in Payson by attending a performance or by making a donation. One way to donate is through the Credit For Kids program. Anyone who wishes to donate that way should pick up a form at Payson High School and designate that the funds go to PHS Drama-MCT. For more information, email Kathy Siler at kathy.siler@pusd10.org or call 928-472-5775.

The next project for the Longhorn Theatre Company is Julie Jensen’s “The Harvey Girls” on Oct. 17-19.