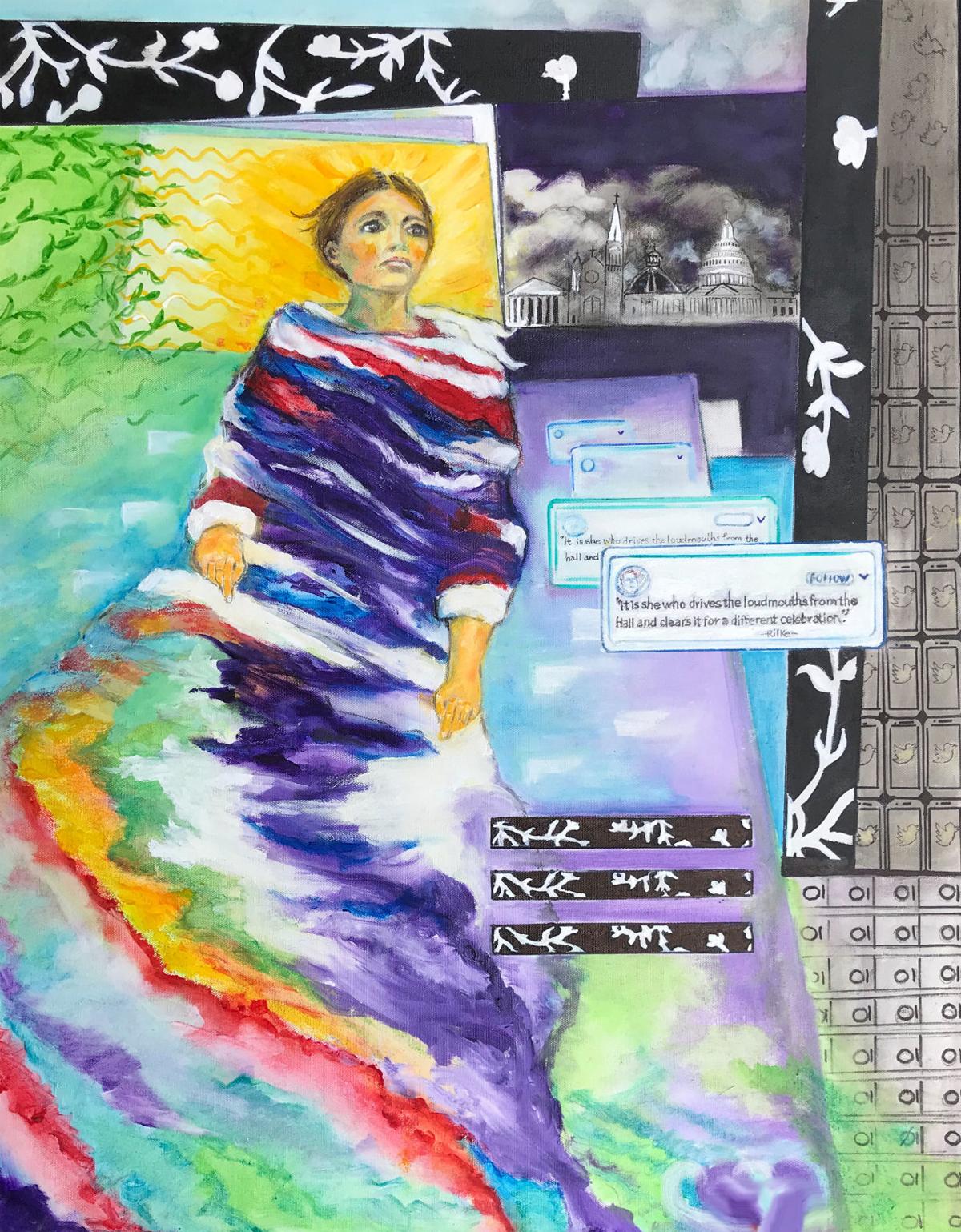 This is the work local artist Roberta Smith shares at the “In Celebration of Women” exhibit commemorating the 100th year anniversary of the 19th Amendment to the U.S. Constitution, which gave women the right to vote. The piece is offered for sale at $1,000. The 30 works in the Herberger exhibit range in price from $75 to $3,000. 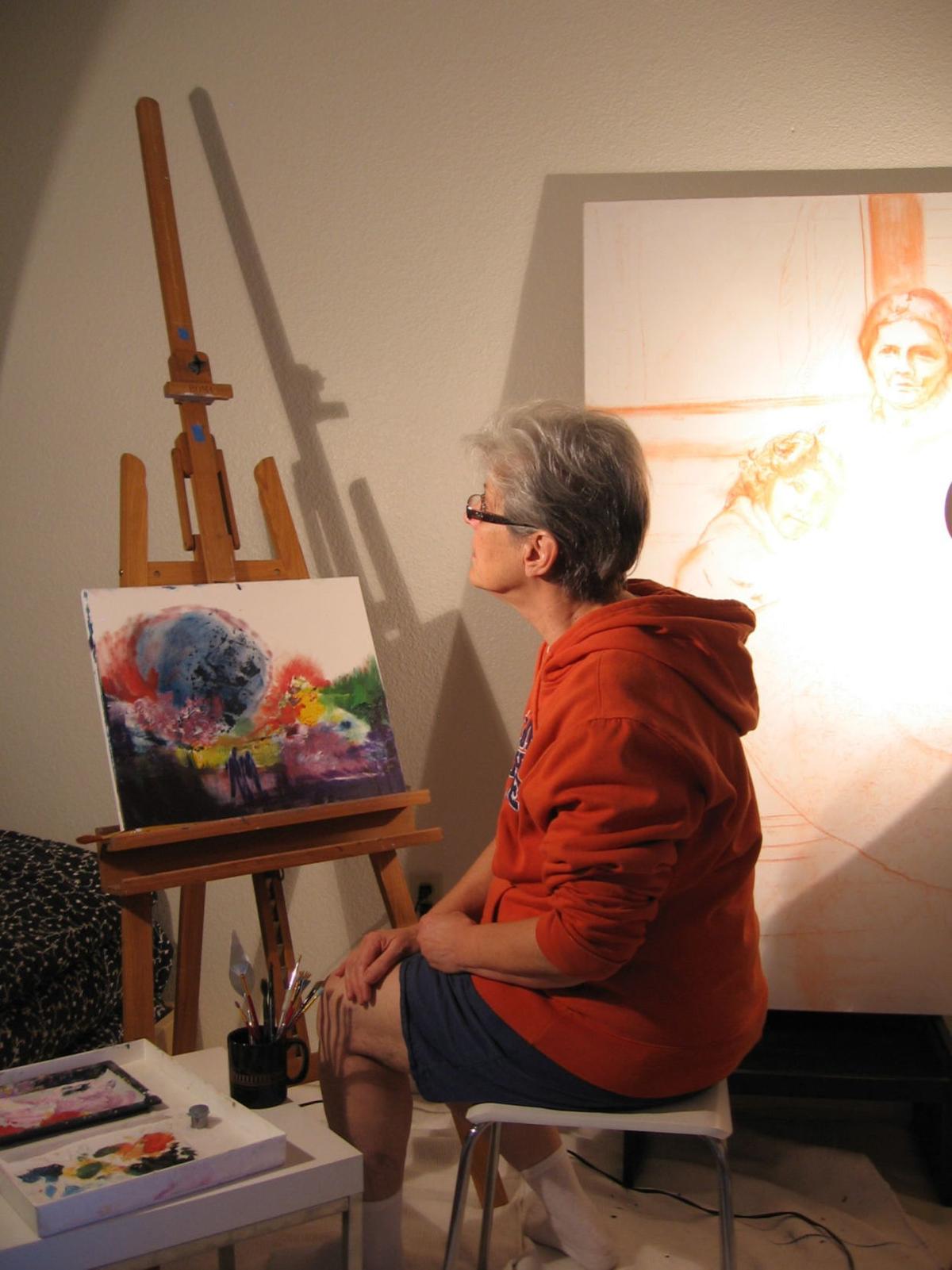 Local artist Roberta Smith is one of 30 female Arizona artists juried into an exhibit at the Herberger Theater Center Art Gallery. The show opens Friday, March 6 and continues through April and then will be displayed at the Arizona State Capitol Museum through the end of September.

This is the work local artist Roberta Smith shares at the “In Celebration of Women” exhibit commemorating the 100th year anniversary of the 19th Amendment to the U.S. Constitution, which gave women the right to vote. The piece is offered for sale at $1,000. The 30 works in the Herberger exhibit range in price from $75 to $3,000.

Local artist Roberta Smith is one of 30 female Arizona artists juried into an exhibit at the Herberger Theater Center Art Gallery. The show opens Friday, March 6 and continues through April and then will be displayed at the Arizona State Capitol Museum through the end of September.

Payson’s Roberta “Bobbi” Smith is one of 30 female Arizona artists selected to take part in an upcoming Herberger exhibition.

Smith’s work is part of the “In Celebration of Women” exhibit commemorating the 100th year anniversary of the 19th Amendment giving women the right to vote. The show is from Friday, March 6 through Sunday, April 26 at the Herberger Theater Center Art Gallery, 222 E. Monroe St., Phoenix. A free opening reception is from 5:30 p.m. to 7 p.m., Friday, March 6. It moves to the Arizona Capitol Museum and is on display from May 14 through Sept. 30.

Smith’s work is a 24-inch-by-30-inch framed oil painting, “It Is She Who ...” featuring a woman draped in multi-colored fabric. She explained the symbolism of the colors she chose: the bottom of the fabric has the colors of inclusion; the center is dominated by shades of purple representing royalty; and at the top are the colors of the American flag.

A variety of images surround the subject. To the upper left are green leaves that Smith said represent the environment. There are also white leaves with stems and flowers on black backgrounds that are the Chinese symbol for “force,” she said. To the immediate right of the subject’s shoulder is a gray image of symbols of Washington, D.C. and at the bottom right and along the right border are gray images representing social media. Smith said she used the gray images to suggest the darkness that seems so pervasive in the U.S. capital and is often generated through social media.

The image includes a quote from a book of poetry by German Rainer Maria Rilke, “It is she who drives the loudmouths from the Hall and clears it for a different celebration ...” that Smith said served as an inspiration for her piece.

The artist’s statement accompanying Smith’s work said, “Inspired by a poem by Rilke ... (it) speaks to our democracy and the rise of women leaders. It incorporates imagery of a society transitioning into an age of digital media.”

Smith was invited to submit a work for consideration by the jury selecting the pieces for the show, which is guest curated by Paula Cullison. She said she is on a list of artists who have shown in previous exhibits at the Herberger Art Gallery. Smith was juried into a show last spring, “Artist Inspirations,” that featured art with environmental themes. She also earned a master’s degree in design science from Arizona State University Herberger Institute of Art and Design.

Smith said the initial contact about the upcoming exhibit was in the fall of 2019 and while the work she has on display was created for the show, she actually began developing it in May 2019 to express her feelings about the new Congress. She explained she develops a piece by creating a series of studies, or preliminary sketches. The studies made for the piece included her versions of a variety of suffragette images and eventually the initial sketch of the image featuring a younger subject.

Smith said she loves showing her work and has had a number of shows in the Phoenix area where she lived before moving to Payson. When she first came to Arizona in the early 1980s, she made a home for herself and her three sons in Flagstaff. Only one of her sons continues to live in Arizona, one is in Great Britain and the other is in California.

Since coming to Payson she has taken part in the Payson Art League and is now on the board of the group that raises scholarship money for students of Eastern Arizona College-Payson.

Smith was born in Chicago and graduated from Northeastern Illinois University in 1977 with a bachelor’s degree in commercial art and advertising. She has worked as a videographer and her art history studies at the Art Institute of Chicago led to a lifelong interest in the arts of Tibet. Smith served as an adjunct professor at ASU teaching computer graphics and multimedia and then went into the corporate world.

She combines a rich visual history of painting and technology and loves the textural experience of the large canvas.

“My canvases are so large they barely fit in my car,” she said.

Her current subject matter features women and the environment. Her most recent exhibit, prior to the one opening this March, was in July 2019 for the Healthy Forest Conference at Eastern Arizona College-Payson.