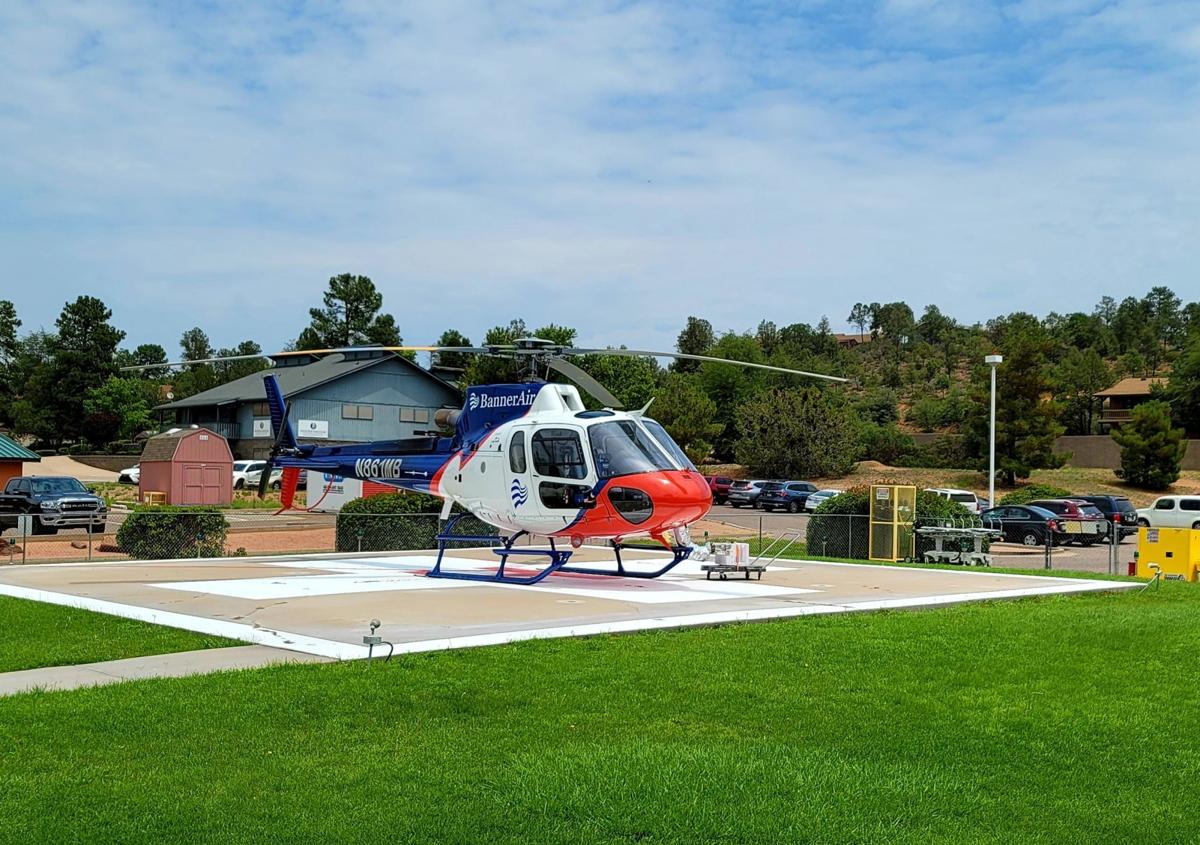 Native Air still operates out of the Payson airport and offers transport services to Rim Country.

Native Air still operates out of the Payson airport and offers transport services to Rim Country.

When you pull up to Banner Payson Medical Center, you will see a new bird on the helicopter pad.

Banner Payson Medical Center will have one of four BannerAir helicopters on its pad most of the time, according to Hoyt Skabelund, chief executive officer for BPMC. BannerAir is also stationed in Casa Grande, Sun City West and Queen Creek with Banner Health using the services for hospital-to-hospital transports.

Since launching the service, Skabelund said the Payson-based helicopter has flown just about every day.

“It’s going well. The change has not created any change in service,” he said.

PHI, which used to be stationed at the Payson hospital, said while it no longer has a helicopter based in the area, it continues to honor memberships for those residents who purchased flight insurance. The company said it will send a helicopter from one of its other bases if requested.

NativeAir also continues to provide transport services in the area.

Colton Jackson, with Native Air, which is stationed at the airport, explained, “For the most part, the closest aircraft (time wise) will be the one transporting the patient. The reason for this being most diagnoses are time sensitive. Can a patient request a specific agency to transport? Yes. Will the patient be transported by that agency? It depends on the circumstances.”

Jackson said, “Native Air maintains relationships with all its community partners and Banner is considered one of these that we work closely with. Our flight volume will be impacted by Banner having an aircraft at their hospital, as that would be the closest aircraft to patients needing to be transferred from the hospital and therefore most appropriate. Native Air does and will continue to transfer patients from the hospital if BannerAir is no longer the closest and most appropriate.”

Skabelund said BPMC is well served by its prior partnerships.

“The decision to launch BannerAir was not made due to any deficit in care,” he said.

“This partnership between Global Medical Response and Banner Health, the largest health care organization in Arizona, could reduce emergency response time and speed up hospital-to-hospital transfers throughout the state,” said Richard Swedbergh, chief operating officer for Banner Health Emergency Transportation. “This unparalleled educational, clinical and logistical support will allow our team to operate as a new component of a comprehensive health care system.”

The four BannerAir helicopters all are designed to land in higher elevations and rougher terrains in the state.

“Many members of the flight team are already known in the area, coming to BannerAir from PHI,” Skabelund said.

“This joint venture is an extension to provide the best possible care for our patients, especially during emergency scenarios,” said Swedbergh, who said BannerAir will transport patients to Banner and non-Banner hospitals.

“We will always do what is in the best interests of our patients, regardless of the facility. Our flight crews are empowered to make those decisions.”

Staff, medical equipment and medications onboard BannerAir helicopters make them equipped to handle nearly anyone with serious trauma injuries or a critical illness. Onboard equipment allows the flight team to monitor and provide care for nearly any clinical condition.

“Native Air has an aircraft and full-time team of clinicians, pilots, and mechanics based in Payson at the airport 24/7, 365. Native Air is a part of the nationwide company Air Methods with service throughout the U.S. In addition to the aircraft in Payson, Native Air has five bases within 30 minutes of Payson that are able to perform flights as needed (Mesa, Phoenix, Prescott, Prescott Valley, and Show Low),” Jackson said.

“Membership plans with BannerAir will be available for community members to enroll in at a later time,” said Alexis Kramer-Ainza with Banner’s marketing and public relations department.

Jackson explained air ambulance subscriptions, “Air medical subscriptions essentially are a membership program that individuals enroll in that helps or in some cases prevents them from paying a bill. The company gets paid by billing the individual’s insurance company. Essentially, they are like an insurance product, hence why many states have outlawed them.

“Air Methods, Native Air’s parent company, does not have them.”

Instead of a membership program, Native Air has a Patient Advocacy program, Jackson said. “There is nothing to sign up for or anything to do in advance, and if an individual is flown, a patient advocate will contact the individual or their family. Everyone gets the same treatment no matter their insurance status,” he said.

Native Air’s advocacy program is successful, he said. It assists patients in the billing process in their time of need. Native Air also has many other unique programs — it carries human blood for transfusion in flight. “Blood, as you may know, is essential for life. According to many recent studies, individuals stand a greater chance of survival if they receive blood immediately. This is very advantageous to our rural location and potentially life saving for many individuals,” Jackson said.

Jackson also discussed the criteria for use of air transport. “When a patient’s diagnosis or injury mechanism falls within certain time sensitive criteria — heart attack, stroke, life threatening trauma, other critical illness — one of two things will happen. If the patient has not yet been brought to an emergency department, and the patient falls within designated criteria, an air ambulance will be contacted by EMS/fire department and the patient taken to the closest and most appropriate facility for evaluation and treatment via air transport. If the patient has been brought to or is at an emergency department and a time sensitive diagnosis been made, the hospital will contact an air ambulance, find a facility, accepting provider, and room assignment arranged. Once this has been completed, then the patient is taken to an appropriate facility for treatment.”

PHI offered subscriptions to Rim Country residents, but it is no longer based locally. A recent letter to subscribers explained, “… we want to inform you of a recent change in the location of our aircraft impacting your community. We have discontinued our helicopter operations located at the Banner hospital in Payson. We will continue to serve our Payson PHI Cares members and the entire community through our flight bases located nearby in Show Low, Miami/Globe, Deer Valley and our newest base in Flagstaff (opening in the fall).”

Discussing the changes with PHI, Jackson said, “PHI no longer has an air ambulance base in Payson. This is quite bothersome to many residents, as PHI continued/continues to renew memberships from locals. As I mentioned above, the closest and most appropriate aircraft is usually the one to transport patients who need to be flown to a hospital, and PHI is no longer that aircraft. You would be hard pressed to find an EMS paramedic or hospital physician that could justify waiting an extra 30+ minutes for an aircraft when there are multiple aircraft much closer. Technically, PHI still serves the Payson area, but the likelihood of them being called to transport a patient is very low.”

He added, “Native Air has full intention of maintaining its current relationship with community members and partners. Will this impact our flight volume? Short answer, yes.”

Some of the Payson residents holding insurance policies with the helicopter providers will find themselves with longer response times, sadly.

At least people on Medicare will still have some helicopter transport coverage, which is even better with some of the Supplement plans.

The quote from the article, " the Payson-based helicopter has flown just about every day." tells it all. Our local health care facility is so greatly limited, as to require "DAILY" transport to actual hospitals. Banner saw missed $$ opportunities with transports from other carriers, as they aren't making ends meet with providing health care here in Payson. Everyone goes elsewhere.