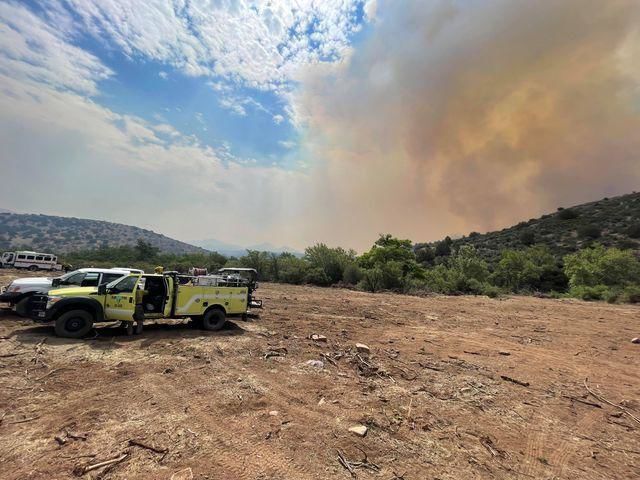 The Mescal Fire is burning near Globe. 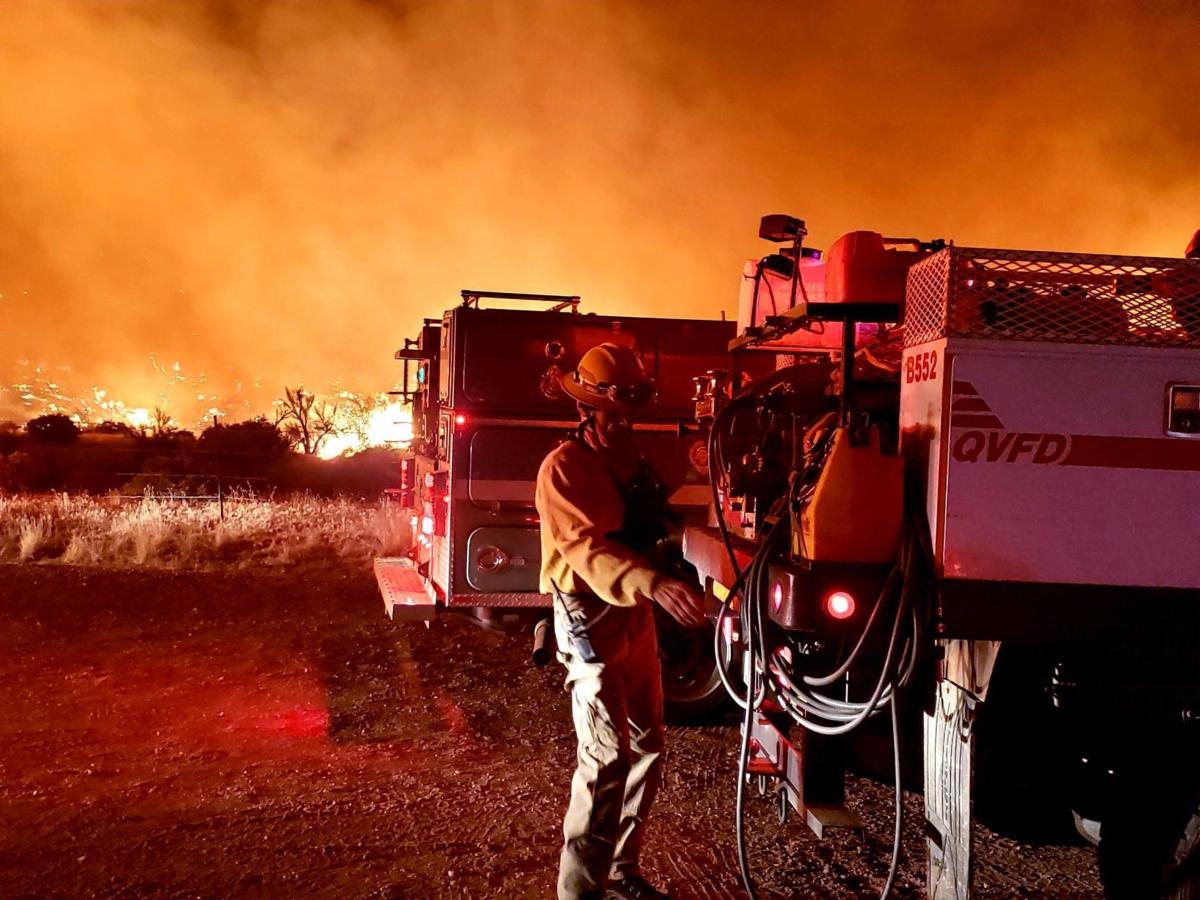 Crews continue to battle the Telegraph Fire that is new Superior and has Miami and even the Cobre Valley Regional Medical Center on alert for possible evacuation. 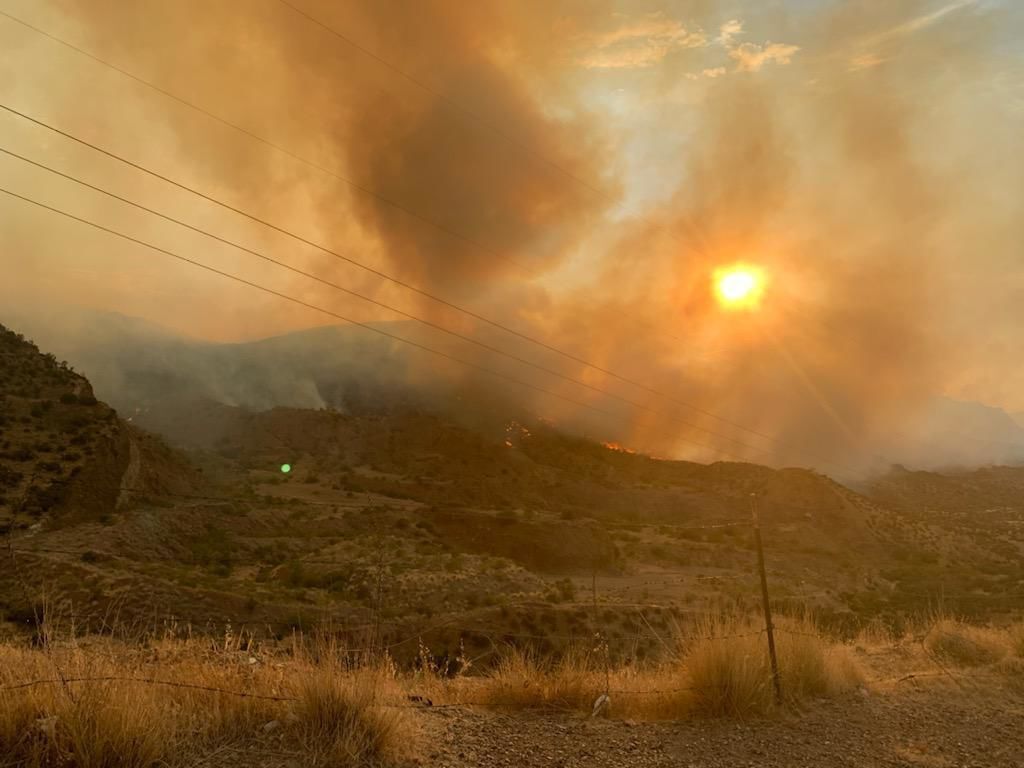 The Telegraph Fire has burned more than 40,000 acres near Superior.

The Mescal Fire is burning near Globe.

Crews continue to battle the Telegraph Fire that is new Superior and has Miami and even the Cobre Valley Regional Medical Center on alert for possible evacuation.

The Telegraph Fire has burned more than 40,000 acres near Superior.

Two fires near Globe exploded over the weekend, cutting off routes to Rim Country and the White Mountains and forcing evacuations.

The Telegraph Fire blew up to 41,000 acres, prompting an evacuation order for Top-of-The-World and the Oak Flat campground, putting Superior on evacuation alert as well as Miami, Claypool, parts of Central Heights and the Cobre Valley Regional Medical Center, and closing State Route 60 between Globe and Miami as well as State Route 177 south of Superior.

The Red Cross has set up evacuation centers in Miami, Globe and Apache Junction. The fire started on Friday from undetermined “human causes” and as of the Sunday update was showing “extreme” fire behavior despite the best efforts of 199 firefighters.

Meanwhile, the Mescal Fire 12 miles southeast of Globe expanded to 26,000 acres as of Sunday night, with 672 firefighters battling flames driven by 40-mile-an-hour winds advancing on the community of Coyote Flats. The fire contributed to the closure of Highway 177 between Winkelman and Globe.

The update for the fire on Sunday reported, “The Mescal Fire experienced extreme fire activity on Saturday. The fire crossed the 600 Road (Old Coolidge Dam Road) and pushed toward Route 3 moving over Hog Mountain. Firefighters successfully built fire line and burned along the 600 and 740 roads to protect the community of Soda Canyon Friday night. On Saturday they worked to prevent the fire from moving through the San Carlos High School area. Air tankers and helicopters are being utilized extensively to support firefighters on the ground as needed. Crews are still protecting the power line.”

A years-long accumulation of fuels combined with the drought has produced “extreme” fire behavior — with wind-driven embers thrown far ahead of the fire lines. The fire’s only 8% contained and will likely remain uncontained until June 30, according to the update. The hot, dry spring and the lack of rain this winter has left fuels bone dry — and the worst of the fire conditions a month ahead of normal.

Almost the entire state’s now in the grip of exceptional or severe drought, with only the 50/50 chance of a normal monsoon sometime in July standing between the forest and disaster. Almost all of Apache and Navajo County struggle in “exceptional” drought, while Gila County is in “extreme” drought.

Unfortunately, even if the monsoon delivers near-normal rainfall this year — we’ll still have to deal with above-normal temperatures, according to forecasters.

Phoenix has already topped 105, Payson climbed into the 90s and Show Low hit the upper 80s — all temperatures well above normal.

This means the state could also flirt with the daunting record for heat-related deaths set last year. Near record summer heat last year killed at least 494 people, 300 of those in Maricopa County. By comparison, the heat in 2010 killed 282 people — which was itself much higher than most previous years. In the past five years, the heat has killed an estimated 1,500 people in Arizona.

The heat proved lethal for the homeless, people without air conditioning or money to pay the power bills and people living in mobile homes — especially the elderly.

In 2020, Phoenix set all kinds of painful heat records — with 145 days above 100 degrees and 53 days above 110. So brace yourself for another summer of coping with heat refugees from the Valley — upset they can’t have campfires in the forest.

And it may get worse.

The rise in average temperatures linked to heat-trapping pollutants in the atmosphere accounted for an estimated 37% of heat-related deaths between 1991 and 2018, according to a massive study of trends in 43 countries by researchers from the London School of Hygiene & Tropical Medicine and the University of Bern published in the journal Nature Climate Change.

The increase in deaths proved most extreme in Asia and South America, due to the impact of humidity and the lack of air conditioning and other infrastructure that can limit the impact of heat. The study authors didn’t have enough data from Africa or India to include those regions in the analysis, which likely means the increase in heat-related deaths is much higher.

All of Arizona in the past week got a down payment on another dangerously warm summer.

At the end of last week, temperatures in Phoenix topped 108 — although the forecast called for temperatures closer to 104 this week.

In Payson, the high temperature hit 93 on Thursday and remained in the upper 80s over the weekend. The forecast calls for temperatures to rise again into the 90s this week.

In Show Low, temperatures topped out at about 87 over the weekend. The forecast calls for a dip early in the week, with a renewed rise to about 88 later in the week.

No rain glimmers in the forecast for the next week — which isn’t surprising in June. Payson normally gets just a drib of rain in June — maybe a quarter inch. Show Low gets a little more — but less than half an inch in a normal year.

But the National Weather Service says this isn’t a normal year.

The just-issued Fire Season Outlook for June notes that exceptional drought has a grip on the whole state — perhaps the worst in 1,000 years. Trees, downed wood and brush have dried out dangerously — way worse than last year at this time. That’s not good, since wildfires charred nearly 1 million acres in Arizona in 2020. The whole region faces “above normal significant wildfire potential” on into July.

At that point, “The extended outlook favors above normal temperatures, with generally equal chances for above, near, or below-average precipitation for the monsoon across Arizona,” concluded the Weather Service.

That sounds pretty non-committal, but it at least offers some hope the fire season will eventually end — unlike last year’s “nonsoon,” which led to big fires on into the fall.

“With equal chances of above, near, or below average precipitation by July, the significant wildland fire potential should become normal by then,” concluded the June outlook.

Normally, July ranks as the wettest month of the year in Payson. On average, it rains 18 days out of the month — a total of 3.2 inches. High temperatures average about 88 degrees, with humidity averaging 43%.

In Show Low, July normally brings 15 days of rain — a total of about 1.7 inches. High temperatures normally average about 85 degrees.

The swelter of April and May guaranteed the region would head into the worst fire month in bad shape. Firefighters have been scrambling for weeks to prevent fires from raging out of control in the dry, hot conditions.

As of the end of last week, they’d mostly succeeded — despite a blaze that consumed about 18 homes in Bagdad. However, the fire season is also beginning to flare in New Mexico, Colorado, California and Idaho — which will test firefighting resources nationally in the weeks to come.

Active Arizona fires listed on Inciweb at the end of last week included: