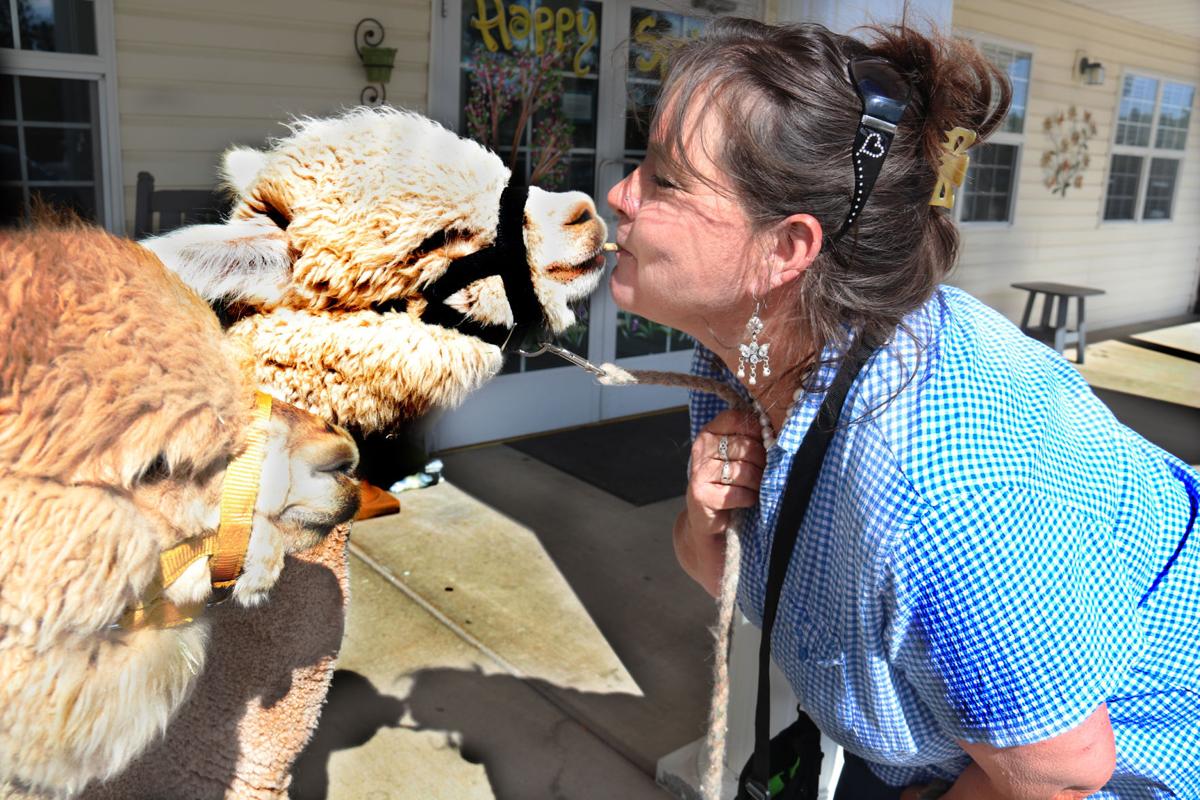 Carolyn Hanniford gives Adam a kiss, with a little help from a treat, while Winston looks on. He’s a little more reserved, she said. The Hannifords brought Winston and Adam to Powell Place to entertain the residents who have been housebound for months. “Kisses are fun until alfalfa burps,” said Carolyn.

A Powell Place resident wanted to pet Adam but because of the quarantine could only reach toward the glass. 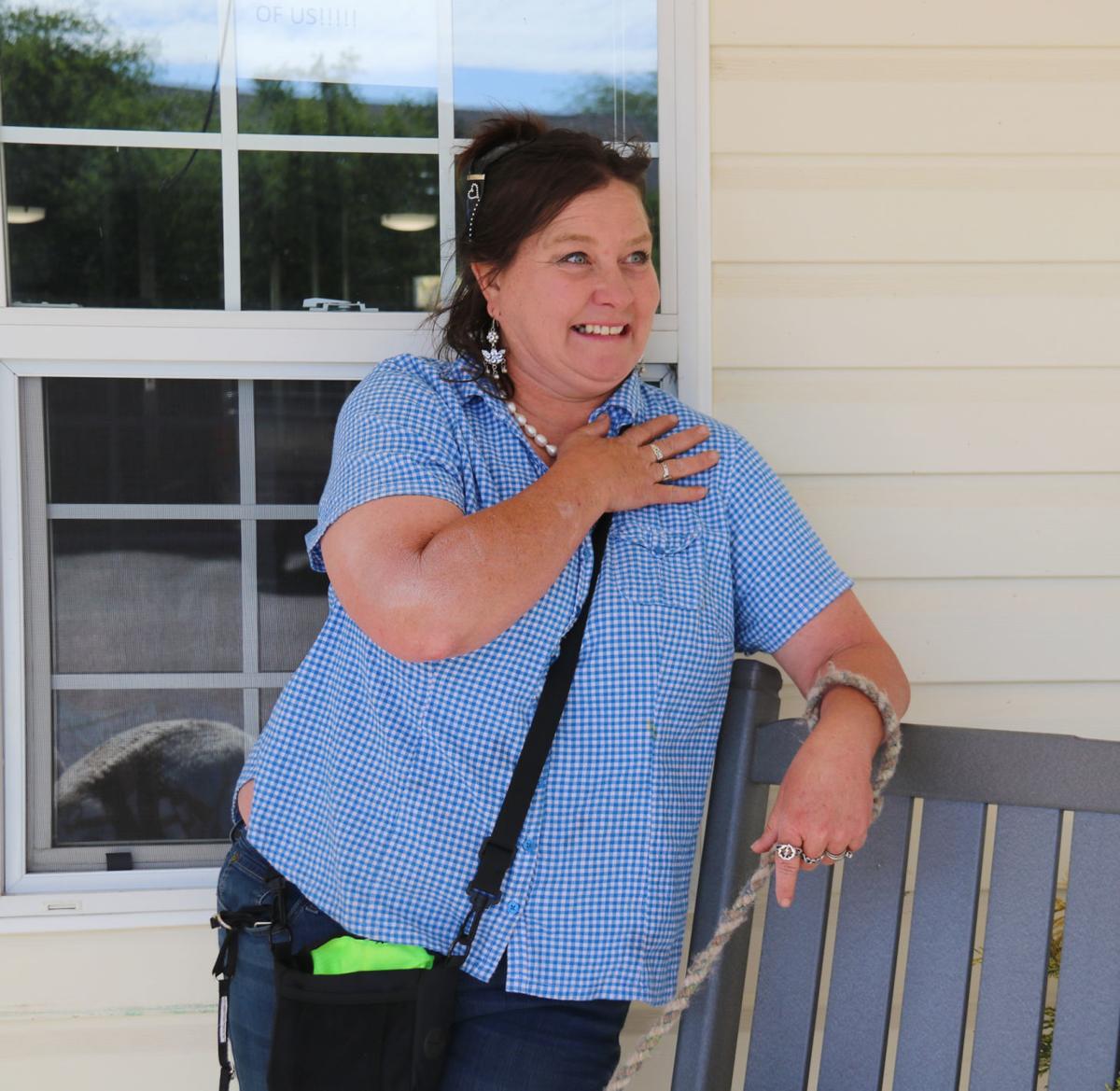 Carolyn Hanniford worked for an assisted living home in her past life. She knew many at Powell House would appreciate a visit from two of her four alpacas. 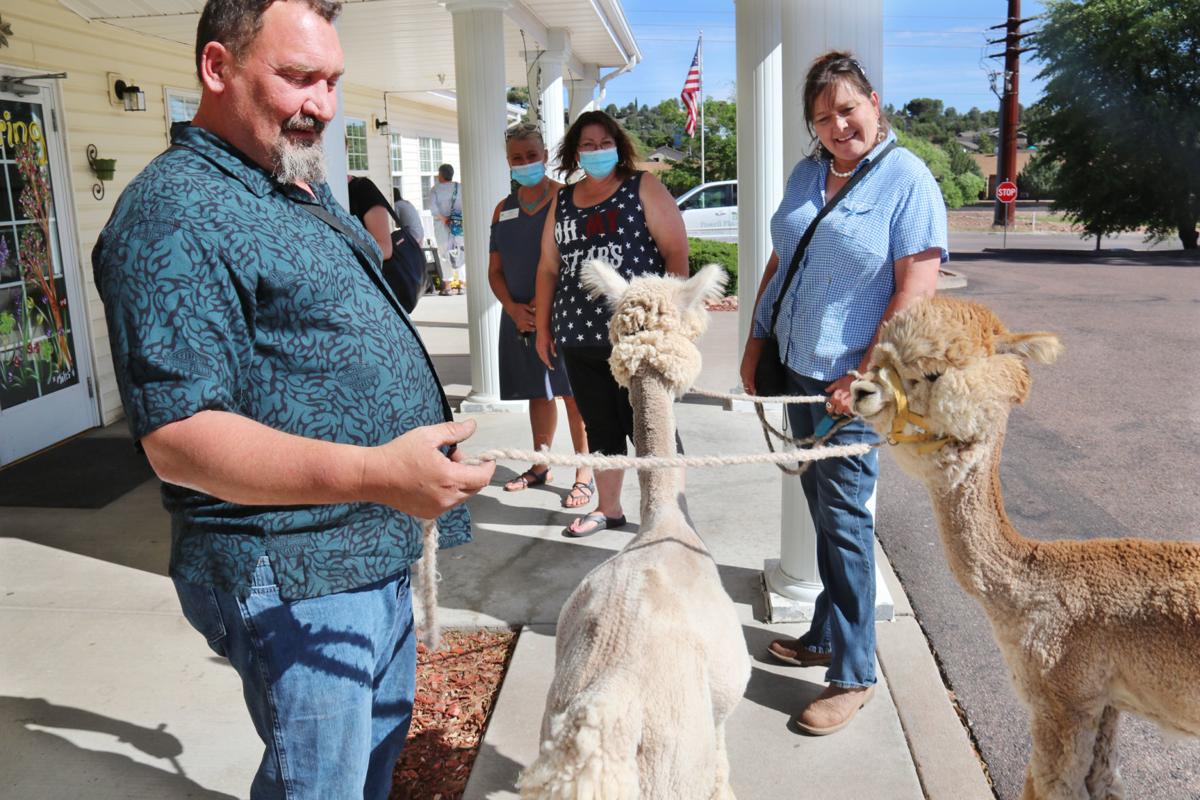 The Hannifords with Adam and Winston, their two alpacas outside Powell House. The four stopped by the visit the quarantined residents. 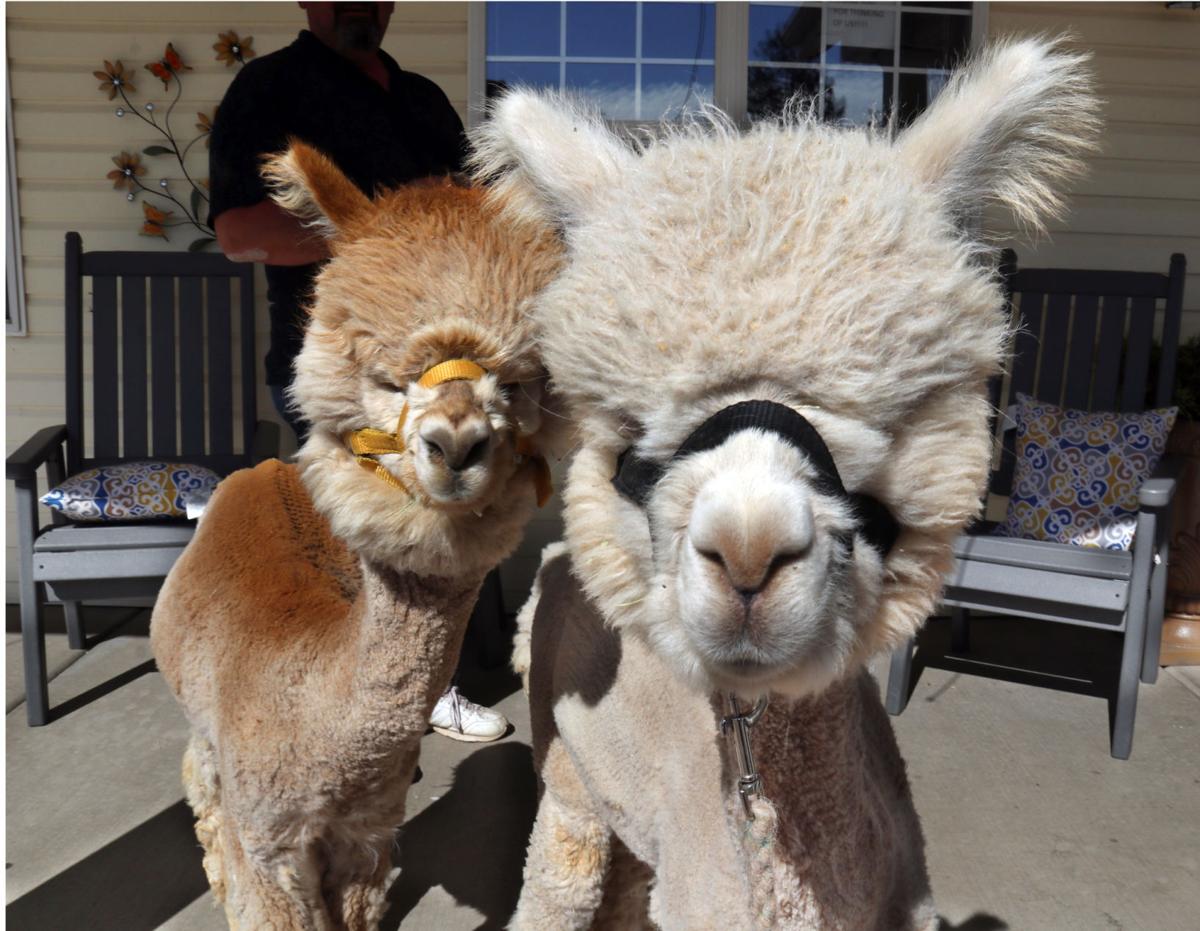 Above: Winston and Adam (left to right) love to entertain. The alpacas’ owners, Carolyn and Sean Hanniford brought the pair to Powell House to entertain the residents through the windows. “They bring us so much joy and happiness we had to share,” said Carolyn. At right: A Powell Place resident wanted to pet Adam but because of the quarantine could only reach toward the glass.

Carolyn Hanniford gives Adam a kiss, with a little help from a treat, while Winston looks on. He’s a little more reserved, she said. The Hannifords brought Winston and Adam to Powell Place to entertain the residents who have been housebound for months. “Kisses are fun until alfalfa burps,” said Carolyn.

A Powell Place resident wanted to pet Adam but because of the quarantine could only reach toward the glass.

Adam and Winston loved the visit, even though they could only look through the window.

The two alpacas came to the Powell Place assisted living facility with their owners, Carolyn and Sean Hanniford, on a recent sunny Saturday.

Despite the residents quarantined inside to protect the facility from a COVID-19 outbreak, they tapped on their windows to get the furry-faced critters’ attention.

Adam and Winston were curious until their owners offered treats. That trumped all.

Carolyn used to work at an assisted living facility so she knows of the challenges of keeping up the residents’ spirits.

“I just love these folks. They have been cooped up so long,” she said.

She knows the director of Powell Place, so the two cooked up the idea of the alpaca visit.

Across the nation, assisted living and retirement homes have put their residents on lockdown to avoid a COVID-19 outbreak — and for good reason. Most of the deaths from the virus have hit nursing homes and the elderly the hardest.

But keeping the residents’ mental and emotional health engaged proves a daily challenge.

Adam, a white alpaca and Winston, a fawn multicolor alpaca, are about a year and a half old. The Hannifords have two other alpacas at home named Leo and Pepper.

The couple got into alpacas about five years ago when they moved to Rim Country from the Valley.

Alpacas are related to a camel, but look like llamas. Their fiber makes the “cashmere of South America,” said Sean.

Carolyn makes blankets out of the alpacas’ fiber. She plans on entering them into competitions.

“They judge the density of the fiber,” she said, “It never stops growing.”

She regularly shears the alpacas.

Adam has the largest personality of the Hannifords’ alpacas.

“Adam is a ham. He is the boss of all four boys,” said Carolyn.

It didn’t help Adam’s ego when he won (along with Leo) third place in the Channel 12 cutest pet contest, said Carolyn. The two were featured on the Valley news channel posing in various locations.

It’s hard not to just reach out to scratch a furry teddy bear face, but alpacas don’t like that. Carolyn suggested petting the neck and back because, “he doesn’t like his belly touched,” either, she said.

As Carolyn moved Adam to the window of a lady who grew up on a farm, Winston looked around anxiously.

“They are pack animals,” said Sean.

Where one goes, the other follows.

Alpacas have a clever streak Carolyn showed off, by getting a kiss from Adam with an alfalfa — beet cookie.

“Kisses are fun until alfalfa burps,” she said.

After wandering around to each window at Powell Place, the staff came out to announce the visit a success.

“It’s impossible to be unhappy around them,” said Carolyn with a giggle.