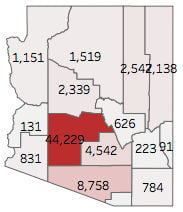 This map shows the number of tests done in Arizona by county. 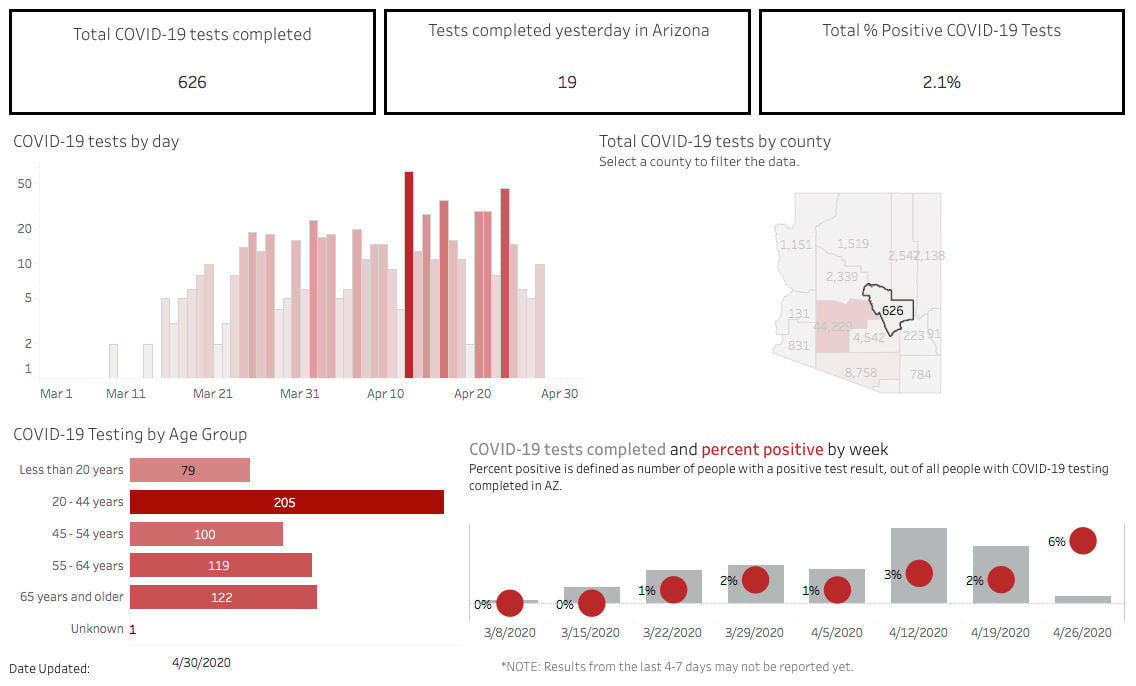 This graphic breaks down the COVID-19 testing in Gila County.

This map shows the number of tests done in Arizona by county.

This graphic breaks down the COVID-19 testing in Gila County.

Can we safely reopen the economy if we don’t know who’s spreading the virus?

That’s the key question behind the state’s effort to mount a “testing blitz” for the next three weekends — perhaps doubling the number of COVID-19 swab tests done since the outbreak began.

Gov. Doug Ducey on Monday announced the testing “blitz” and on Wednesday followed that up with news he will not lift the stay-at-home orders, at least for the next few weeks.

Ducey said there just isn’t the data from the state Department of Health Services to show Arizona has beaten back the COVID-19 outbreak to allow his order to self-destruct as scheduled on Thursday night. He has extended his stay-at-home order, first issued a month ago, through at least May 15, reported Howard Fischer with Capitol Media Services.

Effective Monday, the kinds of businesses he has not designated as “essential’’ can sell items out the front door. So, for example, everything from furniture stores and jewelers can offer products to drive-up and delivery customers.

Then, by Friday, they actually can allow customers in the door — providing they “establish and implement protocols and best practices.” That specifically includes requirements for “social distancing’’ of at least six feet.

Health experts say testing remains one of the biggest question marks in reopening the economy without seeing a new, lethal surge in cases — especially in rural areas and states like Arizona, which has one of the lowest testing rates in the nation.

The state hopes to test between 10,000 and 20,000 people every Saturday from May 9 to May 16. The testing will take place at drive-thru locations statewide. The sites listed for May 2 are all in the Valley or Tucson, with none in rural areas of the state. Sites for the following two weeks have not been announced.

Until recently, only people with serious symptoms could get the throat-swab test to detect an active infection. The state relaxed those guidelines last week, but you still need a doctor’s order to get a test. The state and private labs have administered some 67,000 tests since the start of the outbreak, with 9% coming back positive.

Gila County has administered 626 tests (as of Thursday) with 13 of those positive. The county has so far had no deaths.Navajo County has done 2,400 tests, including about 70 per day this week. Some 24% have come back positive, roughly three times the state rate. This suggests only the most seriously ill patients get tests in the county.

Apache County has done 2,000 tests, about 80 tests daily this week. About 15% of those tests have come back positive — twice the state rate.

The U.S. has by far the worst outbreak in the world. And while the rate of increase has slowed nationally, the nation continues to suffer about 2,000 confirmed additional COVID-19 deaths daily.

Many public health experts say that the U.S. will need to increase the number of daily tests administered to identify new cases and track their contacts. Without identifying those still infected, reopening the economy will likely result in a second wave of infections. Countries like New Zealand, Australia and South Korea have relied on a much more extensive use of testing and contact tracing to reduce the rate of spread of the virus. New Zealand has gone several days with no new cases and is moving to reopen its economy.

Arizona until recently only tested people with symptoms, even though studies show perhaps half of those infected can spread the virus even though they have few, if any, symptoms.

Fortunately, the daily death toll in Arizona has leveled off or dropped. Moreover, the demand for hospital beds to treat COVID-19 patients has dropped, along with the need for ventilators — even though the number of recent cases confirmed daily has remained stubbornly high, although no longer rising quickly. Computer projections suggest Arizona has perhaps already passed the peak of new infections and may have the virus contained in another month. No one’s sure whether the onset of warm weather will also dramatically slow the spread of the virus, as it does every summer with the flu.

However, all those statistics and the computer projections are influenced by relatively low testing rates. Lacking widespread, random testing or even aggressive contact tracing, doctors aren’t sure how many people are actually infected and can’t track down all the people exposed when they do find a case — precisely the strategy that has worked to slow new infections and deaths elsewhere. In Gila County, for instance, health care workers only talk to three to five close contacts when someone tests positive — mostly immediate family members.

Three months after the first confirmed case in the U.S., states are just beginning to get the test kits, swabs, reagents and other materials needed to undertake widespread testing. With new cases on a slow decline, many states are debating how they can ease stay-at-home orders and allow businesses and schools to reopen even without adequate test data.

Nonetheless, after months of agonizing delay, the volume of tests has risen. The U.S. conducted about 1.2 million tests from April 16 to April 22 compared to 200,000 tests between March 16 and March 22, according to a test-tracking database maintained by the New York Times based on state and federal health records.

The U.S. has adopted a three-phase plan for business reopening, although the decision ultimately rests with each governor. The federal plan at this point does not include a comprehensive testing strategy, although the most recent congressional stimulus/relief package includes $25 billion to develop such a plan along with support for state testing programs. The federal plan calls for business reopening once states establish a “downward trajectory of documented cases” over a period of two weeks, plus vigorous contract tracing and a “sentinel surveillance” program testing people without symptoms — especially in vulnerable populations like nursing home residents.

Arizona doesn’t yet meet any of those criteria.

Assorted private health and research groups have recommended testing anywhere from 1% to 20% of Americans weekly. In Arizona, that would increase the current 1,700 tests daily to somewhere between 15,000 and 300,000 daily.

Other estimates suggest Arizona would need to do at least 100,000 tests per month to adequately identify and isolate those infected before they can spread the virus, particularly if the state starts to reopen the economy. It took seven weeks for Arizona to test its first 51,000 people and the state only last week removed the prohibition on testing people without serious symptoms.

Unfortunately, the standard swab test misses an infection perhaps 15% to 40% of the time in people with an infection, depending on the technique and experience of the person taking the sample. The test requires a health worker to push a swab into the back of the throat or nose to take a sample. This often causes the person tested to cough violently, which prompts the technician or doctor to pull back. Experts think this accounts for the large number of false-negative tests.