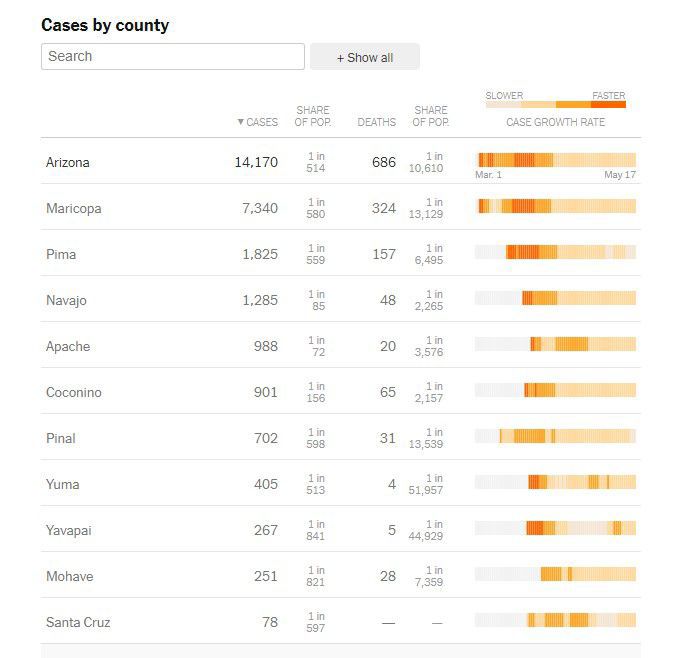 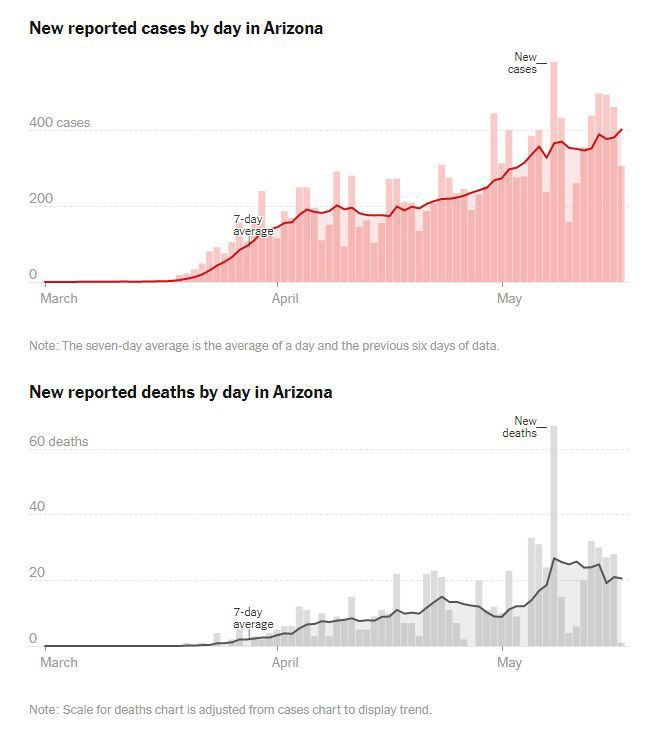 Arizona’s COVID-19 cases have continued to rise, but we won’t know for several weeks how last week’s partial reopening will affect the trend.

Charts showing a steady rise in both deaths and confirmed cases have stoked skepticism by health experts and the public alike as a host of businesses have moved cautiously to reopen and weekend crowds have again thronged Arizona’s high country.

One team of epidemiologists from the state’s universities working with the state developed models of future infections, suggest any major reopening before the end of May would likely result in a big surge in infections. Prior to deciding to start a phased reopening on May 15, the state told the scientists to stop working on the models and cut off access to state tracking data. The state has since somewhat modified that decision.

The state is instead relying on a model approved by the Federal Emergency Management Agency (FEMA), although it has declined to release the results of that model.

Some 23 researchers from the University of Arizona and Arizona State University developed the model that predicted another two-week delay in reopening would reduce the odds of a fresh surge in cases.

Studies suggest that the infection rate is only about 11% for people living together — although sometimes entire families have gotten infected. Most studies suggest a relatively low rate of infection in the outdoors or through casual contact, although the existence of “super spreaders” remains poorly understood.

The statistics regularly updated on the state health department’s website offer mixed signals. The state’s hospitals still have plenty of empty beds, although the number of hospitalized COVID-19 patients remains steady. Moreover, the percentage of swab tests coming back positive has declined from about 10% to about 5%. In “cool spots” like Gila County, only about 2% of the tests are coming back positive.

Those encouraging signs could mostly reflect the increase in testing — especially in lower-risk groups without symptoms.

Overall cases increased 25% and deaths by 39% in the week prior to lifting the stay-at-home order. On May 8, the state had reported 426 deaths.

Arizona had the lowest per capita testing rate in the nation prior to the launch of weekend testing blitz two weeks ago. The blitz aimed to perform 10,000 to 20,000 tests, with nine test centers throughout the state.

In Gila County, the MHA Foundation joined forces with the Gila County Health Department and the Community Emergency Response Team to set up a testing site on their own.

The effect of the opening won’t show up for several weeks, given the time between infection and the onset of symptoms. Even then, studies suggest half the people infected will show few or no symptoms — although they can still spread the disease. Nationally, most of the cases have emerged in nursing homes or in family clusters.

Overall, Arizona has lagged somewhat behind the national trends in bending the curve downward, with total cases and deaths slowly declining. The U.S. has the worst outbreak in the world, with more than 1.4 million confirmed cases and 90,000 deaths. Nationally, the rolling, seven-day average of new cases has been declining very slowly since peaking in mid-April. The death toll has also declined steadily, although it remains above 1,000 daily.

However, instead of slowly declining, Arizona cases and deaths continue to slowly increase, with more than 15,000 cases and 700 deaths. The Arizona statistics have been confused by long lags in reporting deaths. The state’s website adds deaths to the statistics when they’re reported, not when they took place. That has made it harder to determine the trend. Deaths may have peaked in early May with a one-day spike of 67, but that’s unclear because of the lag in reporting. State officials say the one-day spike included many deaths that took place earlier. The true one-day spike prior to that anomaly was 22 on both April 19 and April 20. However, on May 7 the state reported 19 deaths and on May 8 another 21, suggesting the trend in deaths remains on a plateau rather than declining.

The toll remains overwhelmingly concentrated among the elderly, with 80% of the deaths so far among those over 65 and another 11% among those between 55 and 65.

The computer models of infections have generated a wide range of predictions throughout the pandemic, both nationally and locally. The success of social distancing has a big impact on the predictions — which is a constantly moving target.

University of Arizona professor Joe Gerald said infections have continued to rise based on cases contracted prior to any easing in the social isolation guidelines.