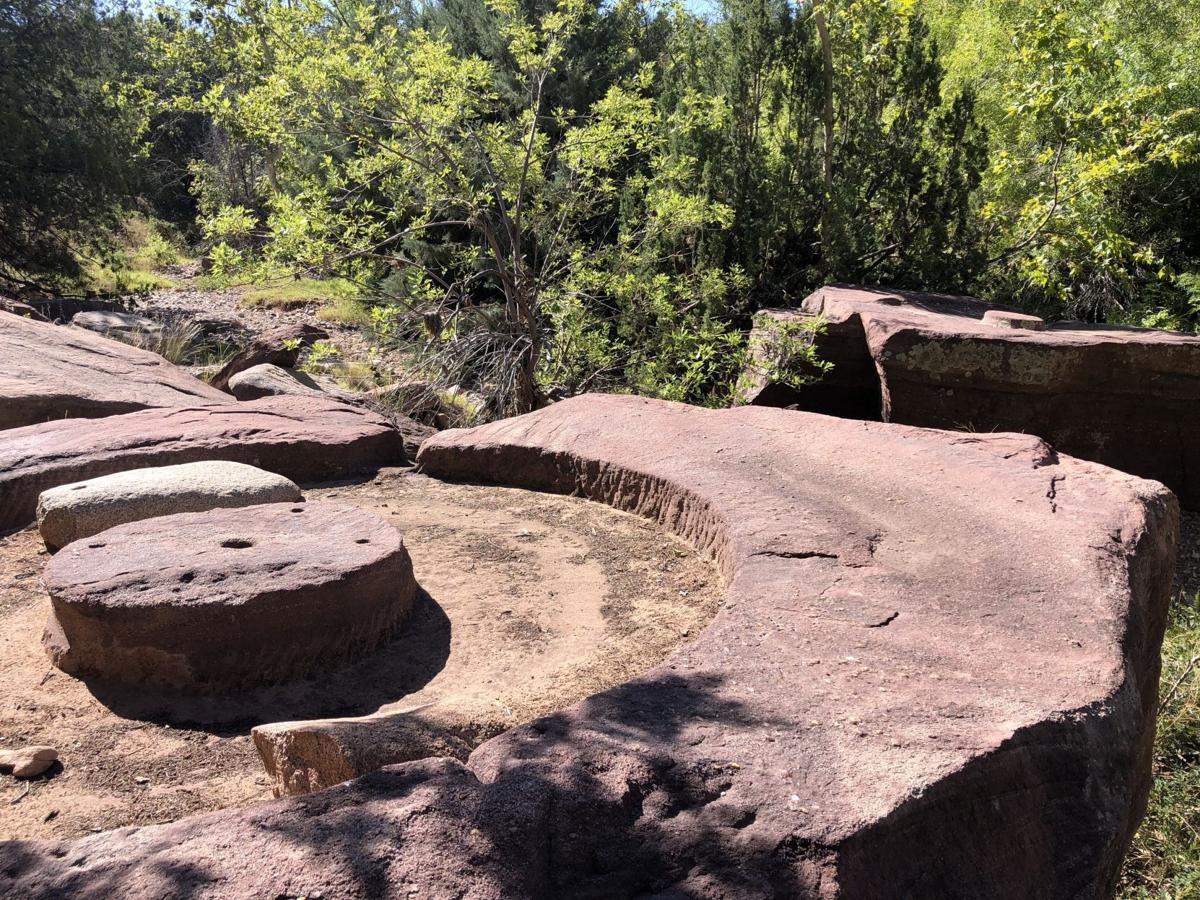 Arrastra carved in a block of pink sandstone, with mounting holes for vertical post and drag-stones still in place. Unknown age. 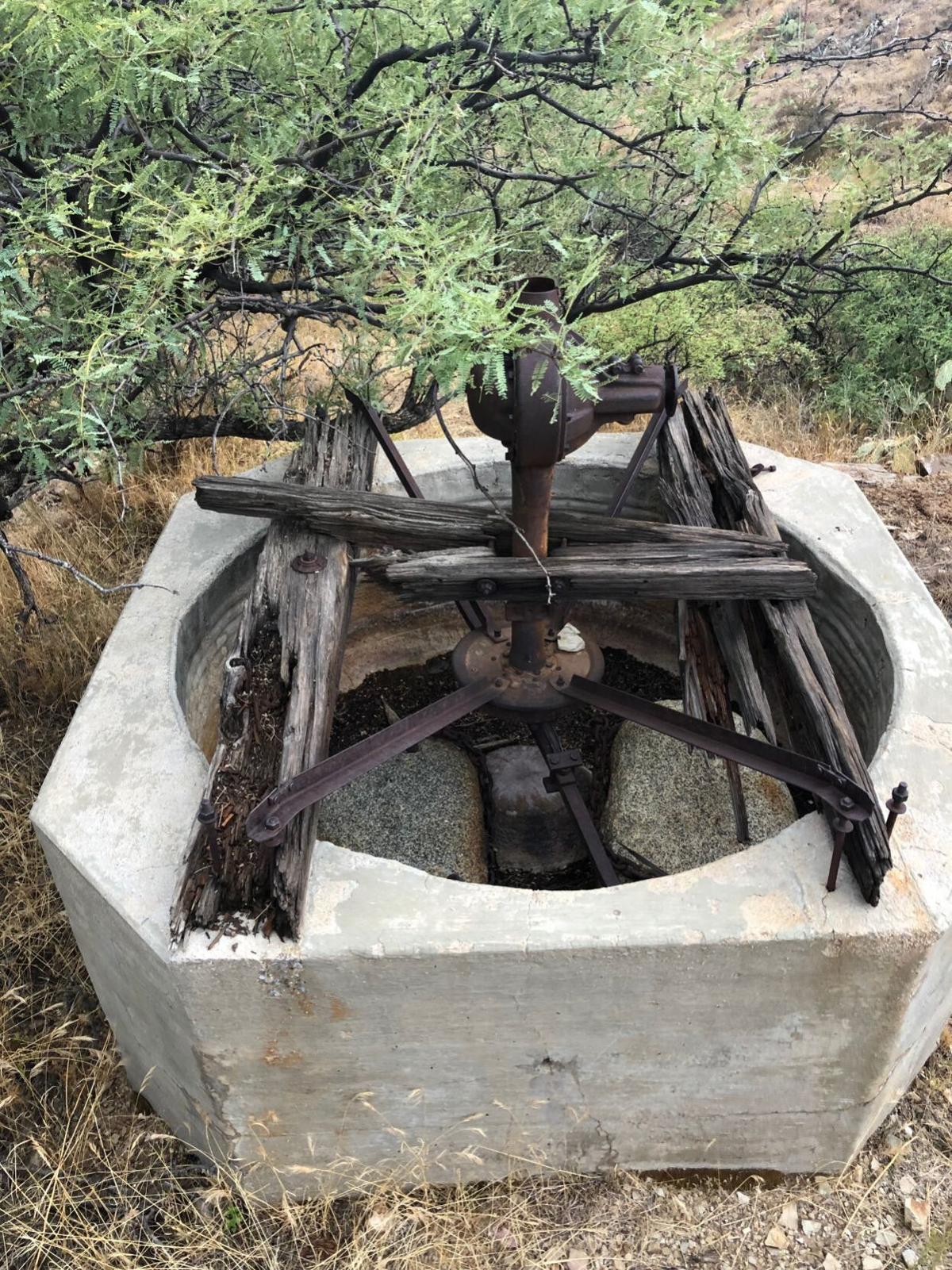 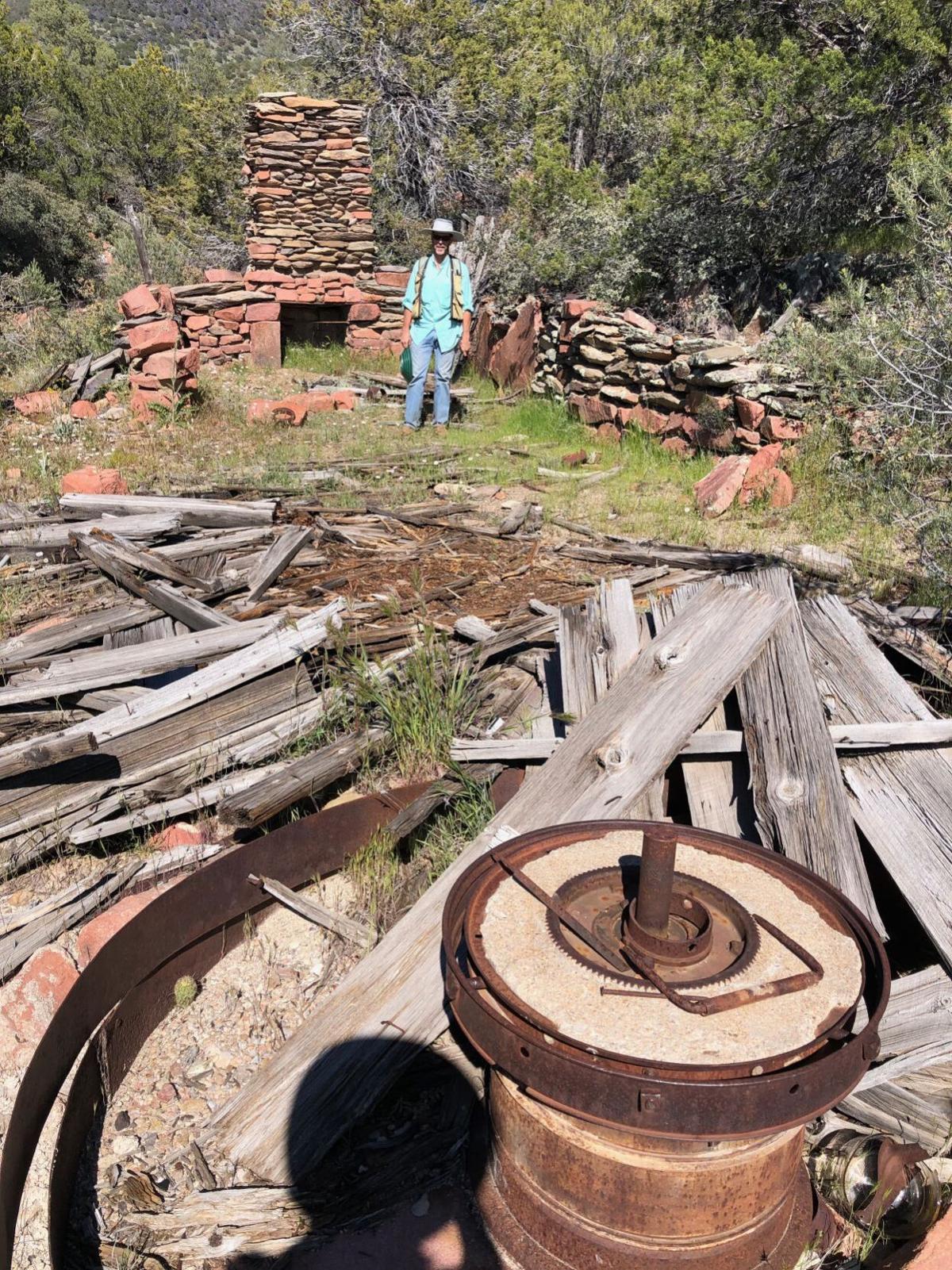 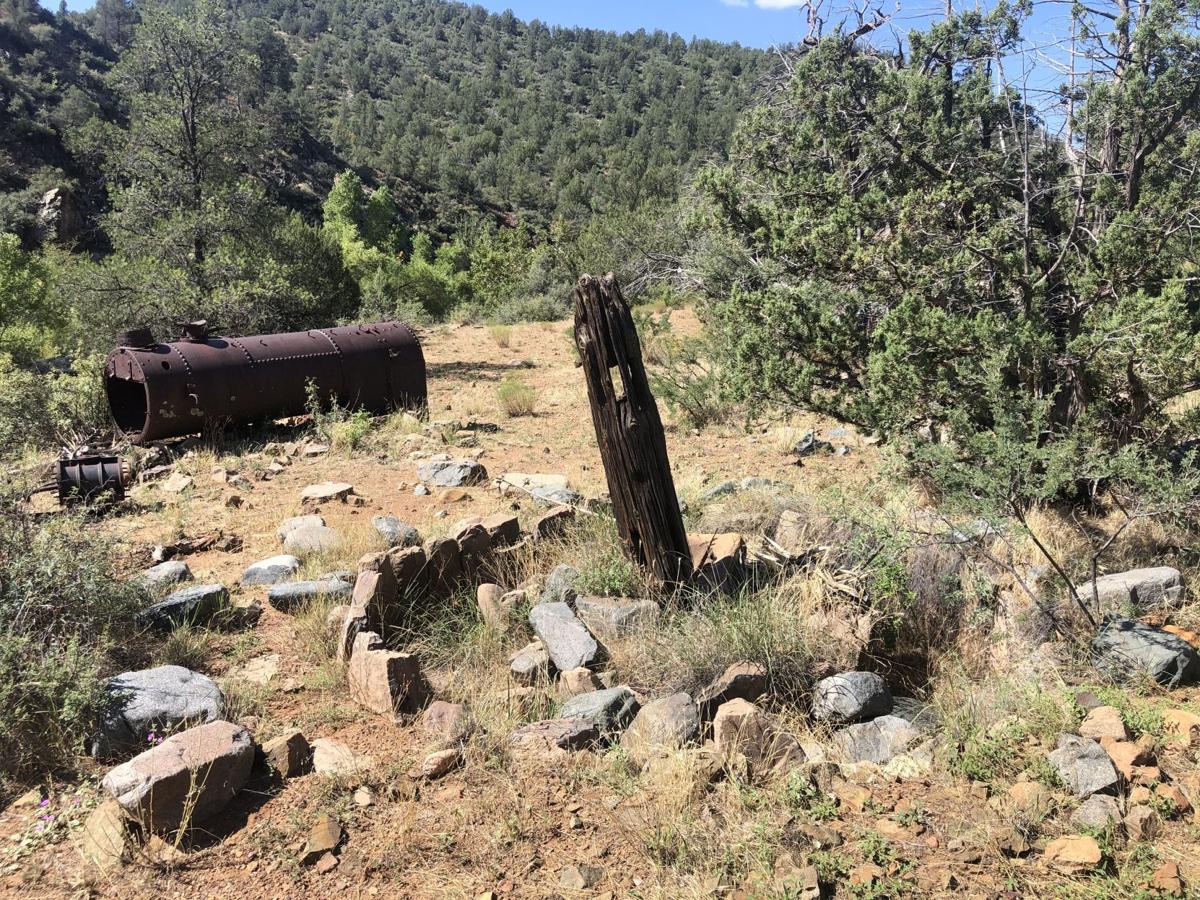 Arrastra carved in a block of pink sandstone, with mounting holes for vertical post and drag-stones still in place. Unknown age.

I was getting a little tired and soaked from wading the creek, working my way downstream in a drainage in northwestern Gila County. I retreated up the canyon-side and promptly got snarled in a catclaw thicket. I pushed my way through the brambles, shredding my shirt and bloodying the exposed flesh, until I emerged onto a sandy bench about 20 feet above creek-level and came face-to-face with the goal of my trek: an arrastra. You might wonder what is an arrastra and why would I be so excited about stumbling on one?

First, I am a mineral exploration geologist and a history buff, so anything to do with old-time gold mining piques my interest. And arrastras are about the best-of-the-best in that department.

An arrastra is an antique ore-grinding mill with a stone or stone-lined circular trough or tank, several yards or more in diameter, centered on a vertical post on which a rotating cross-piece was mounted. One or two large boulders were attached by chains or ropes to the cross-piece and drug around the trough. People or animals provided the power to move the stones over the ore in their path.

“Arrastrar” is Spanish for “to drag,” which gives a good clue on how they work. The dragging action crushed the ore and water washed the waste away, liberating the valuable minerals for amalgamation with mercury. The excess mercury was squeezed out, then the amalgam (an alloy of mercury with gold and silver) was heated, the mercury vaporized and left behind a precious metal “sponge” for sale or later refining.

After they depleted the easy pickings in the California goldfields, prospectors flowed back into Arizona and scratched over the raw desert landscape with picks and pans. Most folks know the lore of the 49ers, the Comstock Lode, the Klondike and other ‘rushes’: tales of bonanzas, broken dreams and notoriety. When prospectors found ‘color’ (gold in the prospector’s pan), news spread quickly, attracting those looking for more and working to recover what they found. When miners exhausted the ‘free’ (placer or alluvial) gold, they had to work the ‘hard-rock’ ore. To do that, they needed to liberate it from the rock, concentrate it and ultimately recover it for sale. That is where the arrastras came into play. No need to order expensive mining and milling equipment when all they needed was local stone, timber and water. Add in a donkey, or some strong friends, and mercury to soak up the gold once they freed it from the ore and you had a poor-man’s gold mill.

The arrastra I was staring at, after emerging from the catclaw, was a circle of upright stones three yards in diameter. In the basin, the rim was a jumble of paving stones that originally covered its bottom. A central wooden post that must have supported the cross-arms from which the drag-stones were hung was still upright. Further poking around revealed the perforated drag-stones themselves. Nearby were the remains of a small steam engine, probably used to power the operation. Based on the latter, this arrastra dates from the late 19th century.

And this last observation brings me to the crux of my fascination with arrastras. Local lore often credits arrastras with a Spanish heritage. My field investigations and research into mining history suggest that most of them are much younger and date from Anglo or Mexican American exploitation of small gold deposits in the late 19th century.

There were 100 arrastras documented to be in operation in Arizona in 1871, so they were not uncommon in the Anglo-American epic; quite the contrary. There is no evidence of Spanish or Mexican mining in Arizona north of the Gila River (including all of Gila County), mostly because of the Apache’s fierce defense of their territory. So, are there any Spanish arrastras in this part of the world? If so, they would bear mute evidence to hitherto undocumented early mining activity, which would be very exciting.

My first arrastra find in Gila County was based on following a GPS track I found on the internet that was supposed to get me to some petroglyphs on the backside of Pinal Peak. The arrastra was kind of incidental to the original goal of the trek, but caught and held my attention. This one was definitely the most modern I’ve come across: it had a concrete basin and a machine drive mechanism. In photos you can see the drag stones used to crush ore within the basin. My guess is that it is only 75 years old.

I came across my second arrastra in a remote corner of the Sierra Ancha, also in Gila County and, again, it was associated with the remains of what was obviously a late-19th to early 20th century gold mining camp, as was the third arrastra, described at the beginning of this article.

But the most beautiful and enigmatic arrastras were the last two I found. Perched within a few feet of each other, they are located further upstream in the same drainage I found the steam-powered version that opened this story. They are almost works of art, with 11-foot diameter circular troughs meticulously carved into huge single blocks of sandstone; they preserve the mounting holes for the center-post and several perforated drag-stones. Search as I might, I could find no other evidence that might prove their age; they are so close to the stream that years of flash floods have probably washed any that might have been present far downstream. Spanish or Anglo-American? We may never know, but they are nevertheless beautiful and fascinating.

Though they may not have known it, the miners who built and used these arrastras were using the same methods employed in Phoenician and Roman times, transmitted to them by their Spanish brethren, through the California gold fields.

These relics found in Gila County testify to a proven technique to get the gold out and, over time, the dragging of those stones in the troughs etched a historical record of gold fever in Arizona.

On a side note, In the course of my wanderings looking for arrastras, I have also seen scores of bedrock metates. These are circular or elliptical concavities, up to 18 inches in diameter, ground into outcropping rock or large boulders, near current or former water sources. These are also often credited to Spanish small-scale gold mining or prospecting however, given their numbers and distribution and the fact that they correlate with water and arable bottomland rather than with mineralization, I am dubious of these claims. I have seen similar concavities, called tahonas, used by small-scale miners in Mexico, known as gambusinos, to test for and process small quantities of gold, as recently as 30 years ago. I think it’s likely our local examples were places where the ancient Native American inhabitants of Arizona ground their corn or mesquite beans into meal.