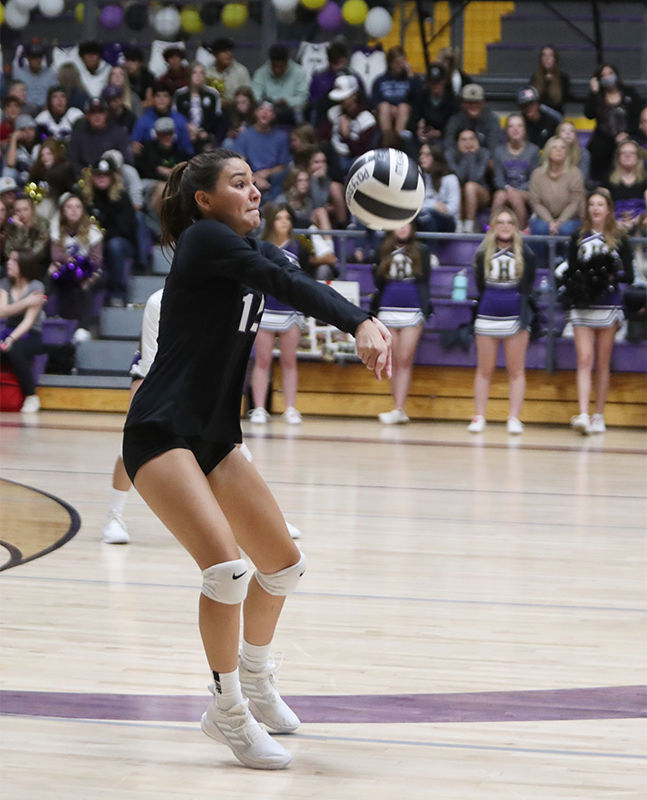 Autumn Lynch digs the volleyball during a game this season. 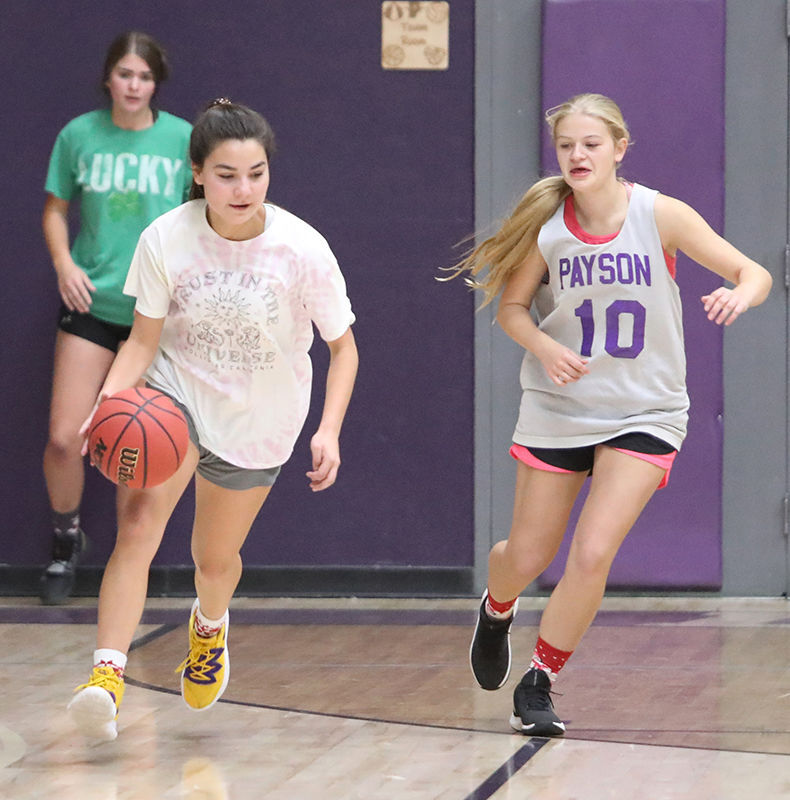 Autumn Lynch dribbles the basketball during practice on Dec. 22, 2020. 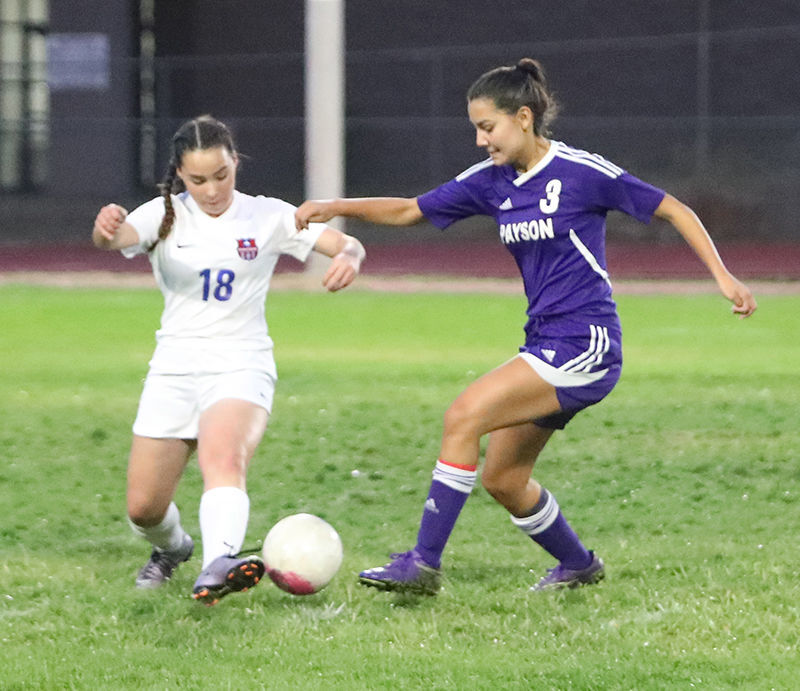 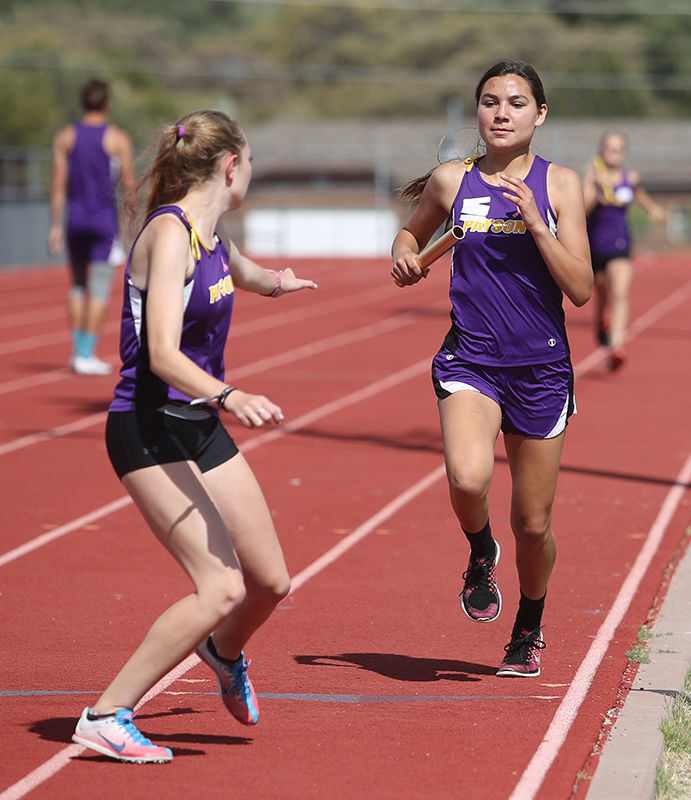 Autumn Lynch gets set to hand the baton to Kyra Ball during Payson's Purple & Gold Track Meet on April 27, 2018. 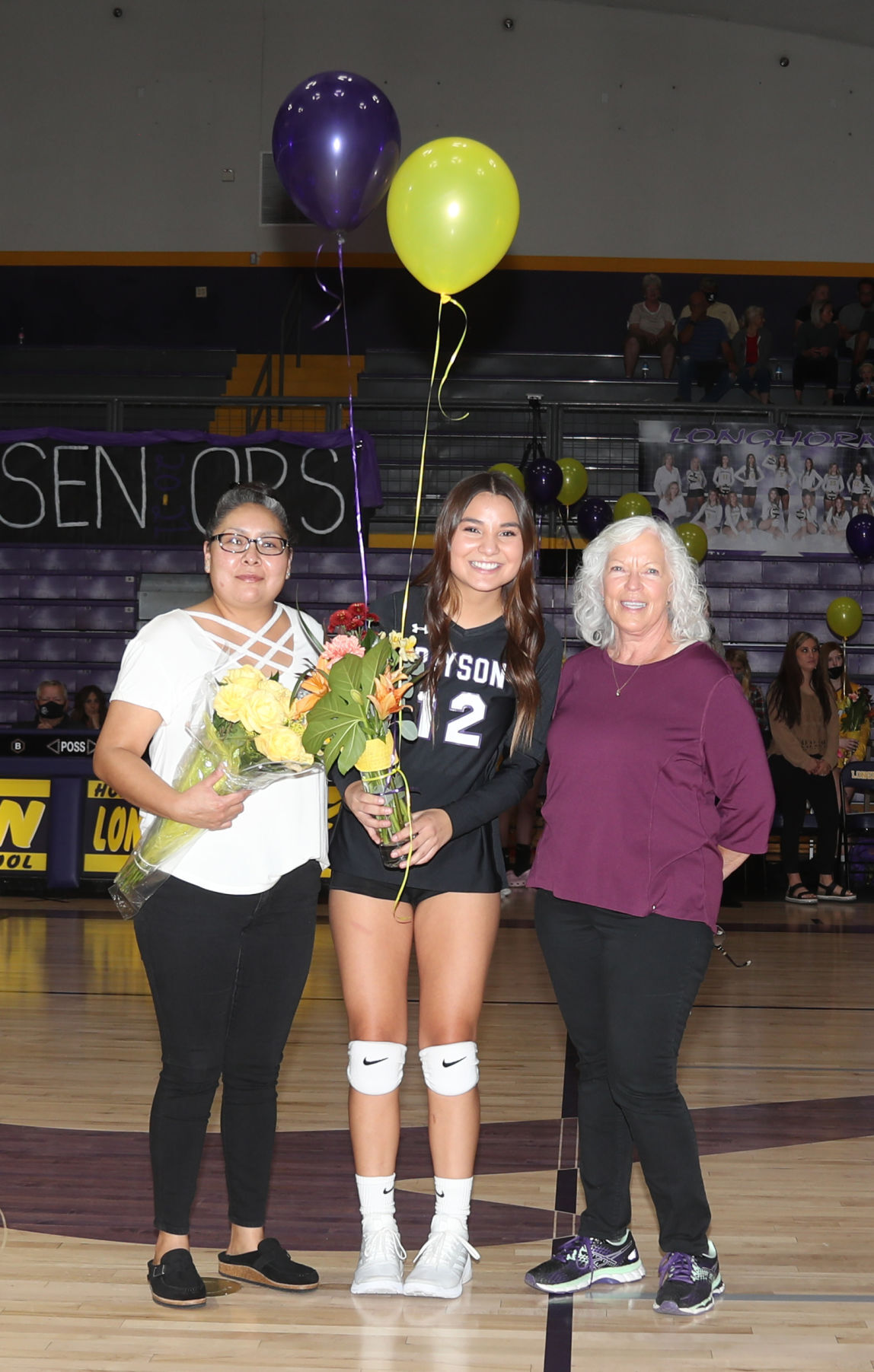 Autumn Lynch with her mother and grandmother on volleyball senior night. 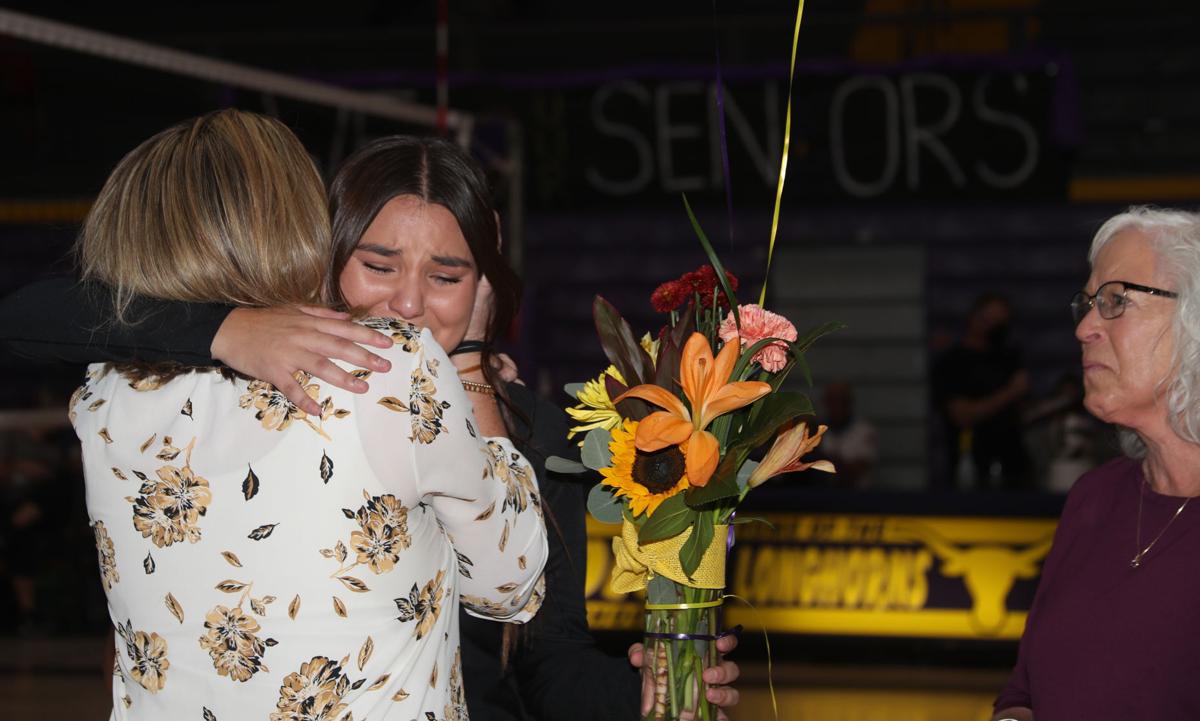 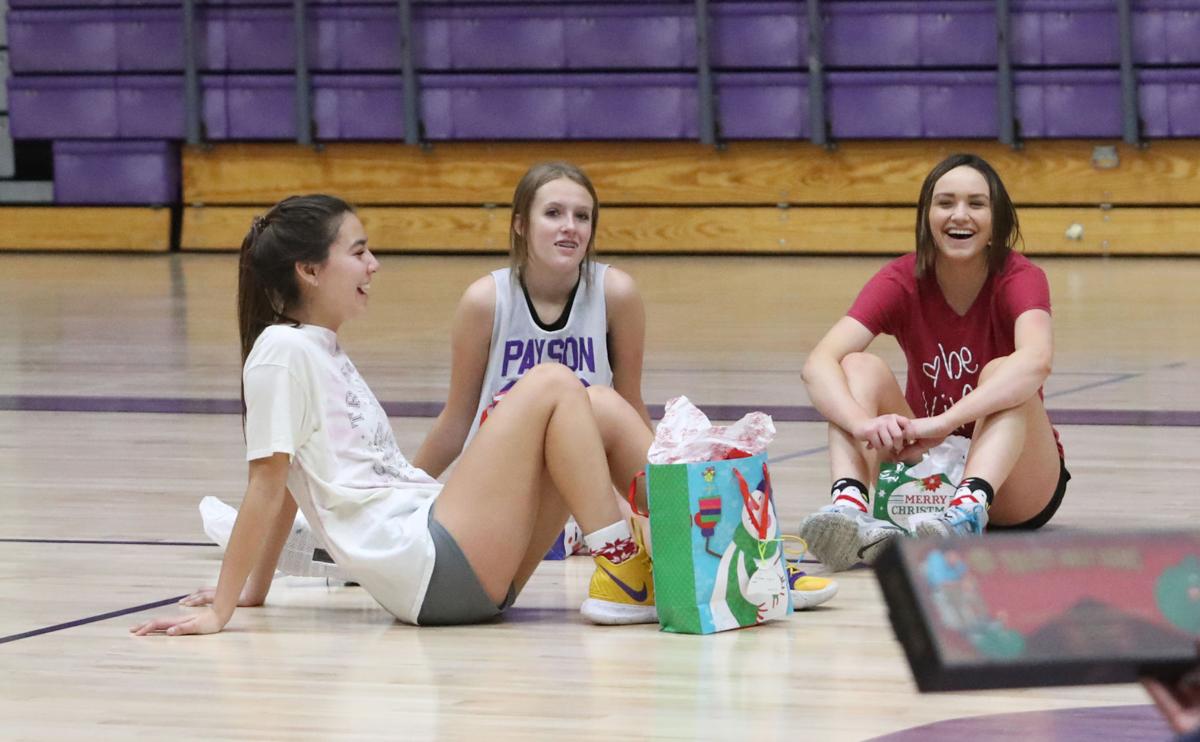 Autumn Lynch digs the volleyball during a game this season.

Autumn Lynch dribbles the basketball during practice on Dec. 22, 2020.

Autumn Lynch gets set to hand the baton to Kyra Ball during Payson's Purple & Gold Track Meet on April 27, 2018.

Autumn Lynch with her mother and grandmother on volleyball senior night.

The Payson High senior has participated in three sports every year in high school.

But it all started before that.

“I’ve grown up playing pretty much every sport offered to me in town,” she said. “I like being outside and being part of a team, and I’m very passionate about all of them and very competitive. I love to win, I’m very aggressive, love to play against others.”

After three years on the high school soccer team, she switched to playing varsity volleyball this past autumn, or fall, just to avoid confusion.

She’s on the varsity basketball team this winter. She ran on the track team last spring before COVID-19 canceled the season.

But she’s exploring the idea of trying to get a tennis club started this spring and would elect to compete in that sport if successful.

She’s a member of the National Honor Society, finished last semester with a 4.0 grade point average, and is the Payson High School student government president.

“That way I can graduate as a nursing assistant at the end of the year,” she said. “I’m definitely interested in the medical field.”

It’s not easy being so active

“The last two years I’ve had to work on my time management a lot, especially with finals and online classes,” she said. “I plan out my week ahead of time the week before so I can focus on one thing at a time, whatever that is.”

COVID-19 has forced Payson into remote learning on and off since last spring, which has been a challenge for Lynch.

“It’s been challenging with doing school online,” she said. “I’m the student body president at the high school and it’s been tough because you can’t get together and plan things. I miss the in person interaction with teaches and friends.”

Payson varsity volleyball head coach and Club Payson coach Shelli Creighton said Lynch is one of those players teams can’t do without.

“Autumn is an amazing young lady,” Creighton said. “She is an incredible leader and mentor, led by her integrity. She was able to fill many different positions between a back row specialist, an outside and opposite side hitter.

“No matter what position was needed, Autumn stepped up and took the challenge with confidence and strength. Autumn will be extremely successful in life, having no fear but complete confidence. She is admired and extremely loved.”

The kind of kid they want

Payson girls basketball varsity head coach Miles Huff said Lynch is such a valuable member of the team and the school.

“She’s very much an emotional leader,” Huff said following a Secret Santa event Lynch organized following practice on Dec. 23. “She likes to get the girls together. She’s very upbeat, very positive. In terms of basketball skills, she brings the effort, she brings the athleticism.

“She’s a multi-sport athlete and that’s what we’ve been preaching (that students should be) for years now. She’s able to play multiple positions. She’s a great player to have in the program.”

She rafts the San Juan River in Utah with her family.

“We do it yearly, sometimes twice a year,” she said. “It is so fun. We’ll get our family and a few family friends and go out and spend up to five days on the river.”

In fact, her father and two brothers were rafting the San Juan when the school honored its volleyball seniors this season. They would have been present had senior night taken place before the last home game of the season, as is the tradition. Instead, it took place after one of the earlier games in the season to avoid what happened when all spring sports were canceled early because of the virus, denying seniors their chance to be celebrated with their families.

So her mother and grandmother were the only ones there to share the experience with her.

It was emotional for her as she and eight other seniors she’s played the sport with for much of her life were recognized. Last year was her first varsity season, but she’s played for Club Payson since she was a little girl, as have many of the varsity girls.

She played on the PHS soccer team the previous three autumns.

“I switched my senior year for a few reasons,” she said. “Volleyball does a lot of offseason things. In the summer they do sand volleyball and soccer doesn’t really do a lot of summer stuff. So I got involved with the team. And I played club ball with some of those same girls. We had a group of nine seniors and we had all been playing for Mrs. Creighton’s club team since we were really young.”

Summer activity was even more important to Lynch in 2020 after COVID-19 shut down all school sports, ending her track season shortly after it started.

She continued to run four to six miles a day on her own as she usually does other than during volleyball season with night games making that too much of a challenge, hoping the season would resume and then through the summer after getting word it wouldn’t.

“That was definitely hard,” she said of the waiting through several weeks in March and April.

She hopes she gets as close to a full track season as possible after her third season ended after just two meets, one of which she missed while out of town.

“That was really hard getting the season cut short, especially because one of my best friends, Baylee North, ran on the 4x800 with me and she ran her last meet without knowing it,” Lynch said. “She was a senior. She was crushed.”

But she’s not sure she’ll go out for track for a fourth time because she and Cadence White are exploring the possibility of starting a club tennis team this spring.

So, maybe she’ll add the role of pioneer to her high school resume.