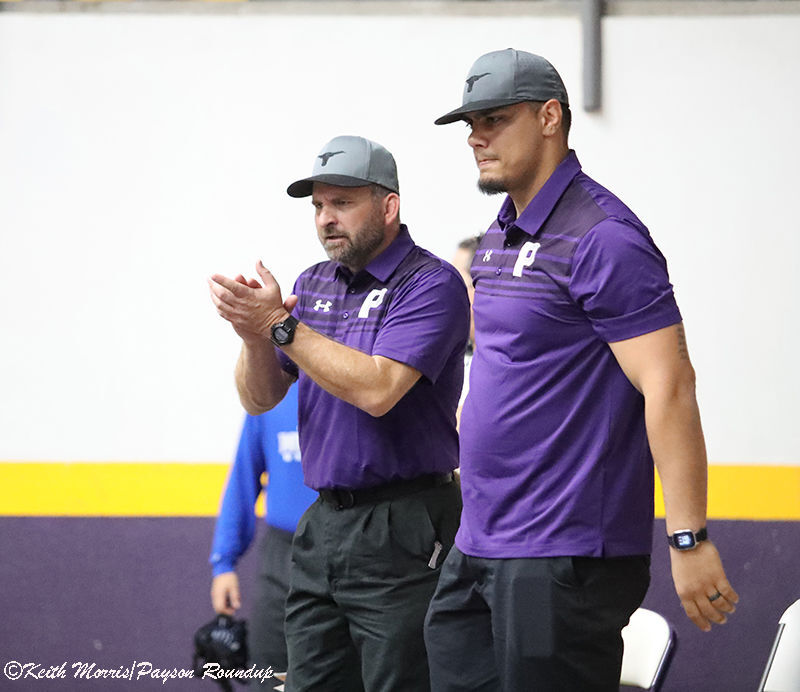 David Daniels (left) and Bryan Burke provide stability for a program enduring many head coaching changes in the two decades since Hall of Fame Coach Dennis Pirch stepped down. 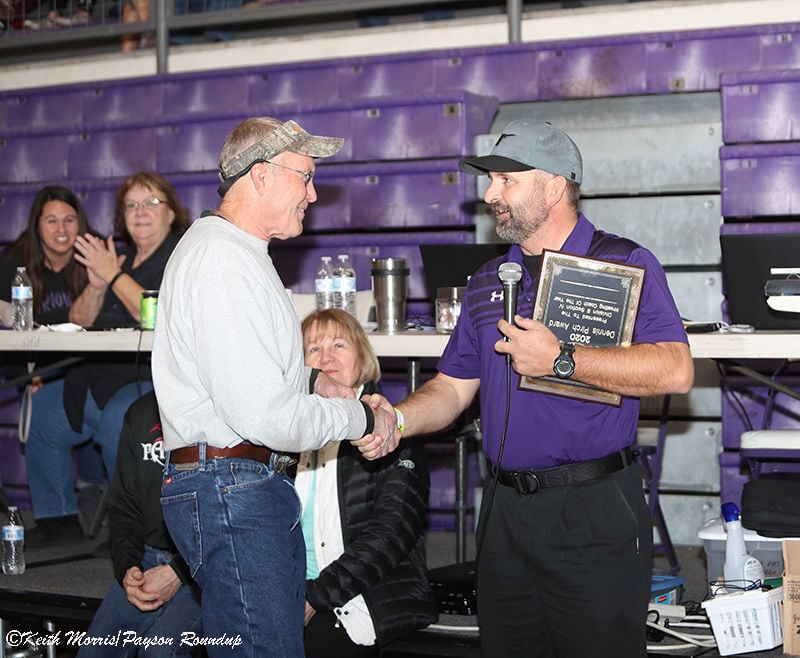 David Daniels shakes hands with Hall of Fame Coach Dennis Pirch as he announces the Dennis Pirch Award for the top coach in the section during last year’s section tournament in Payson.

It’s natural to look at that number and see instability at the top of the Payson High wrestling program in the two decades since Dennis Pirch retired from a Hall of Fame career.

His shadow still looms large and always will after the founder of the program guided the Longhorns to 10 team state championships.

David Daniels takes over as head coach this season knowing all about the history both under Pirch and in the following years.

And he’s ready to take the torch.

“It’s been a few years since we’ve won much as a team and that’s the goal to kind of get back to that tradition that he started,” Daniels said of Pirch.

“We’ve got a good group of kids who bust their butts and everybody’s pulling in the same direction. We’re on the right track.”

Daniels said it’ll take dedication from wrestlers and coaches starting at Rim Country Middle School through the high school to attempt to approach the success established under Pirch.

“What coach Pirch did hasn’t been duplicated by very many coaches in the history of Arizona but we’re building our program and the middle school is strong and we’re building that program.”

Daniels may be entering his first season as varsity head coach, but he’s no stranger to the PHS wrestling program.

Daniels grew up in Payson and graduated from Payson High School in 1992. He was an all-state athlete in three sports — football, wrestling and baseball.

In wrestling, he was a four-year varsity starter, three-time state qualifier and two-time state placer, finishing sixth in 1991 and second in ’92. As a freshman, he contributed to Payson’s 1989 state championship and was a senior on the ’92 team that finished second in the state.

After high school, he went to two junior colleges before transferring to Trevecca University in Nashville, Tenn. on a baseball scholarship. He played four years of college baseball and one year of AA professional baseball before starting his coaching career as a college pitching coach in Tennessee.

He returned to Payson in 1999 and has worked with PHS’s football, baseball and wrestling programs in many different capacities for the past 20-plus years.

Daniels works for the Arizona Game and Fish Department as a wildlife manager. His son, Troy, is a senior on this year’s wrestling team.

Daniels is the 12th head coach in the 48-year history of the program and 11th in the 20 seasons since Dennis Pirch retired after the 2000-01 season.

Daniels coached in the wrestling program previously and is in his fourth consecutive year with the team since returning as an assistant for the 2017-18 season.

Bryan Burke served as the head coach for the 2016-17 and 2017-18 seasons before stepping down as head coach after getting the varsity head football job. He’s been a varsity assistant the last two years.

“I’m ecstatic he’s taking over,” Burke said of Daniels. “This is our fourth year working together and David has been such a huge contributor to our program because he brings toughness, hard work and discipline and is such a great role model for the kids.

Ormand is the PHS athletic director who’ll help in the wrestling room as time allows. Ormand led the Longhorns to top four finishes in the state in each of his three seasons as the varsity head coach from 2003-04 through 2005-06.

Ormand was a two-time state medalist as a wrestler at Marana High, finishing second in 1983 and third in 1984. He also wrestled at Pima CC and for two years in the Army. He coached at several schools in the Tucson area before becoming the head coach at Payson.

Spear, a 2012 PHS graduate, was a four-time state placer for the Longhorns. He won an individual state championship as a senior. He is currently the RCMS head wrestling coach while he takes college classes. Ludtke is an RCMS assistant coach.

“It’s great that we have a qualified and experienced alumnus to take over,” Ormand said. “The paid coaches are alumni and wrestled here at PHS and PCS. I am extremely grateful that David is the head coach this season.

“He was an assistant for me when I was head coach and I already knew about his work ethic and knowledge. He is a great motivator and grew up in the Dennis Pirch era wrestling for him. He brings a certain expectation level from those days.”

Daniels said having a coaching staff with so much familiarity with the program is important.

“Everyone on our coaching staff was a part of some of those great teams of the past,” Daniels said. “We are committed to continuing the great traditions of Payson High School wrestling and building strong young men of outstanding character.”

Daniels is hoping the Longhorns can experience what will have to pass for a full season this year.

“We all have our fingers crossed that we even have a season,” he said. “It’s going to be a really shortened version with very few matches, both seniors nursing some injuries, I think we have a team that could place high in our section.”

The AIA postponed the start of competition for all winter sports about a month. The first games/matches will be delayed until the first full week of January. The Longhorns started five-day-a-week practices on Nov. 30 in preparation for a Jan. 6 opener against Mesa Eastmark at Wilson Dome.

The Longhorns will move to the 12-team Division 3 Section 2 this season. They were in Section 4 last year.

If local COVID-19 infection rates remain similar to what they were last week, no fans will be allowed for any sports according to Ormand.