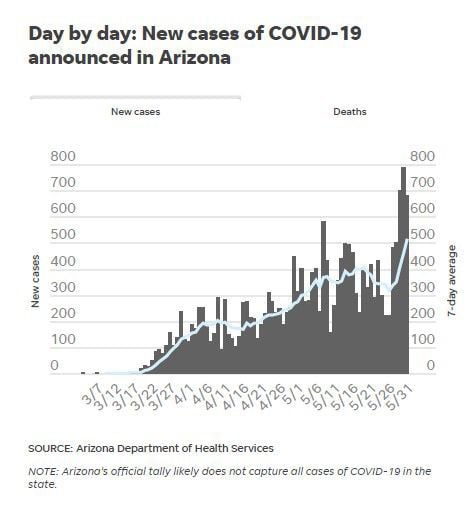 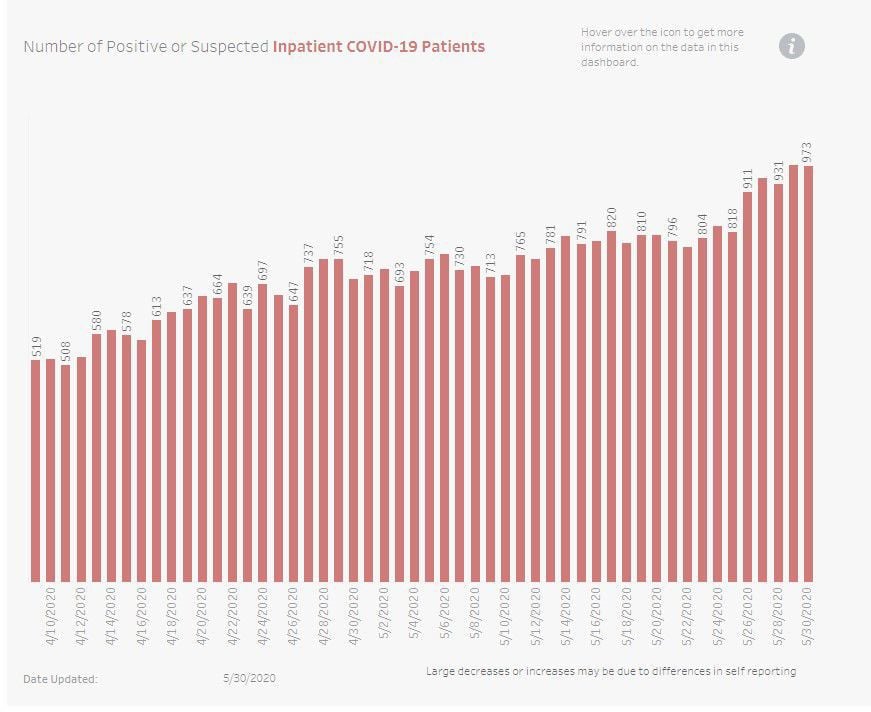 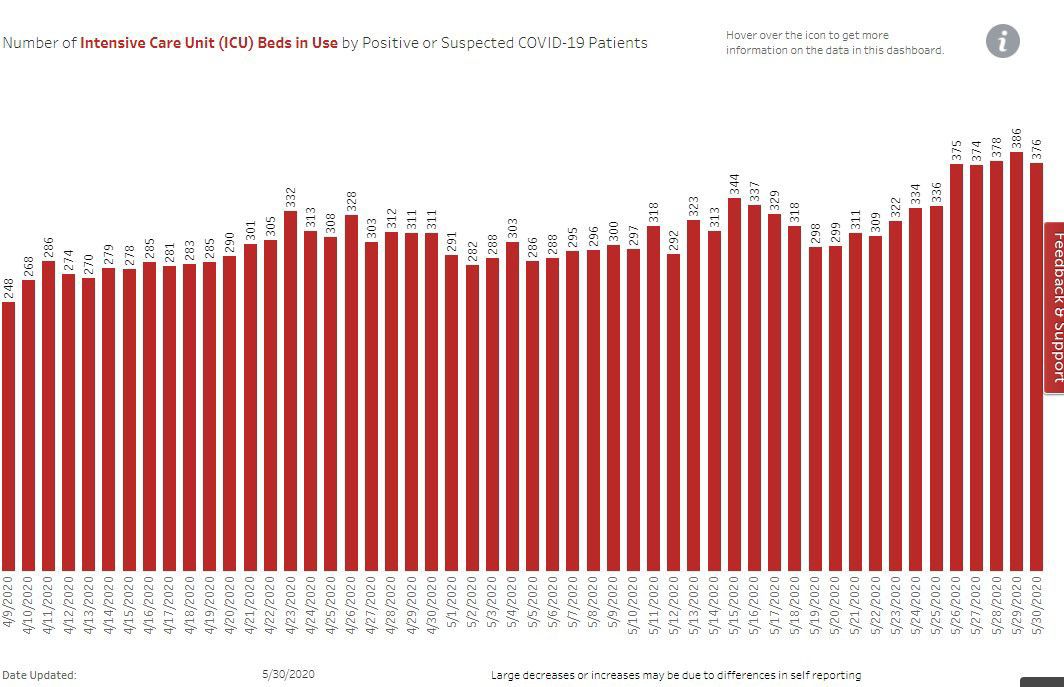 With the stay-at-home order lifted, COVID-19 statistics have taken an alarming turn.

Confirmed cases, deaths and hospitalizations have all risen sharply in the past week, according to figures released by the state Department of Health Services — in some cases setting almost daily records.

Cases continue to rise in Gila County, with the Wednesday figures at 38 confirmed cases and two deaths. That’s still among the lowest rates in the state. Moreover, only 1.1% of the throat swab tests for an active infection have come back positive — one of the lowest positive rates in the state. The positive rate is only 1.2% for the antibody test (serology), which can reveal a past infection. That’s also far lower than the state rate. So despite the steady rise in confirmed cases statewide, rates remain low in Gila County.

Some neighboring counties aren’t so lucky.

Apache and Navajo counties still have infection rates and death rates four or five times higher than the state average. Increasingly widespread testing suggests even the hot spots are nowhere close to “herd immunity,” which would slow the spread of the virus as people resume normal life.

Health officials continue to urge people to avoid crowds in enclosed spaces, wear masks in public, wash hands frequently and cover all coughs to avoid a second wave of infections. The business re-openings don’t mean the virus is gone and the statistics show it remains widespread throughout the state.

Meanwhile, the number of ER room visits, ICU bed use and hospitalizations have all hit record highs statewide – having risen steadily since the start of the infection. Patients are still using only about 35% of the ventilators and hospitals still have about 20% of their beds empty. COVID patients occupy 380 ICU beds and 1,092 inpatient beds.

The rising numbers come with caveats.

The state has increased testing, which could account for the 4.2% increase in positive cases in the past week to some 21,000 statewide. Saturday’s report of 790 cases represented the highest single-day increase recorded. It generally takes five to seven days after an infection for symptoms to develop, which suggests we’re seeing new cases now contracted since the modification of the stay-at-home order. The state’s now reporting the result of more than 8,000 tests per day.

The death toll has also risen, but would not reflect infections since lifting the order. People who end up dying were generally infected at least a month before they die. The state posted 18 new deaths on Saturday, bringing the total above 900. For most of this week, the state reported more than 20 deaths per day. People over 65 still account for about 78% of all deaths, with a third of the deaths concentrated in nursing homes. The figures on deaths are also confounded by changes in state record keeping. The state has been posting death total on the date reported, not on the date the death takes place. This makes it harder to judge the trend. The state has begun changing that practice on its tracking website – with one tally for the day the death took place and another for the date reported.

The more immediate measurement of the trend in infections in the past week remains the statistics on emergency room admissions and ventilator use – both of which have hit new highs. Emergency room visits hit a new high on Thursday and Friday of last week, 667 and 615 respectively. That’s a 14% increase in a week. ER visits have been increasing steadily since April 14’s total of 304.

This testing data shows little progress toward “herd immunity.” Absent a vaccine, only herd immunity will ultimately contain an easily spread virus like COVID-19. Health experts believe people who recover from an infection develop long-lasting resistance to another infection. If 65% of the population has developed antibodies after surviving an infection, the rate of spread of new infections will slow dramatically.

Scientific studies of a random sample of the population in areas that have suffered major outbreaks like China, Italy and New York have found background infection rates of 5-7% – far below the levels needed to begin developing herd immunity.

Moreover, warm weather hasn’t had a big impact on infection rates — contrary to the hopes of some experts based on the behavior of the flu virus. This means the virus will likely continue to circulate through the summer, underscore the expert advice about wearing masks and maintaining social distancing even as the economy reopens.

Fortunately, researchers are making record-breaking progress in developing a vaccine — which could become available early next year if everything goes well.

Peter: Like always you are dispense your negative diatribes without telling the whole story.

First, the daily number of people tested have quadrupled,

Second, percentage of infections is down by half.

Third, Payson has the lowest number of positives in the state per 10k population.

This remarkable number of 2 per 10k is in the face of historic number of weekend visitors to the rim country.

I am amazed at times how out of touch you are with the real story while simply parroting the advocacy positions of the left wing tip socialists,.

If you test four times as many people and the total number of infected only rise by less than half, the percentage of those infected is one-eighth.