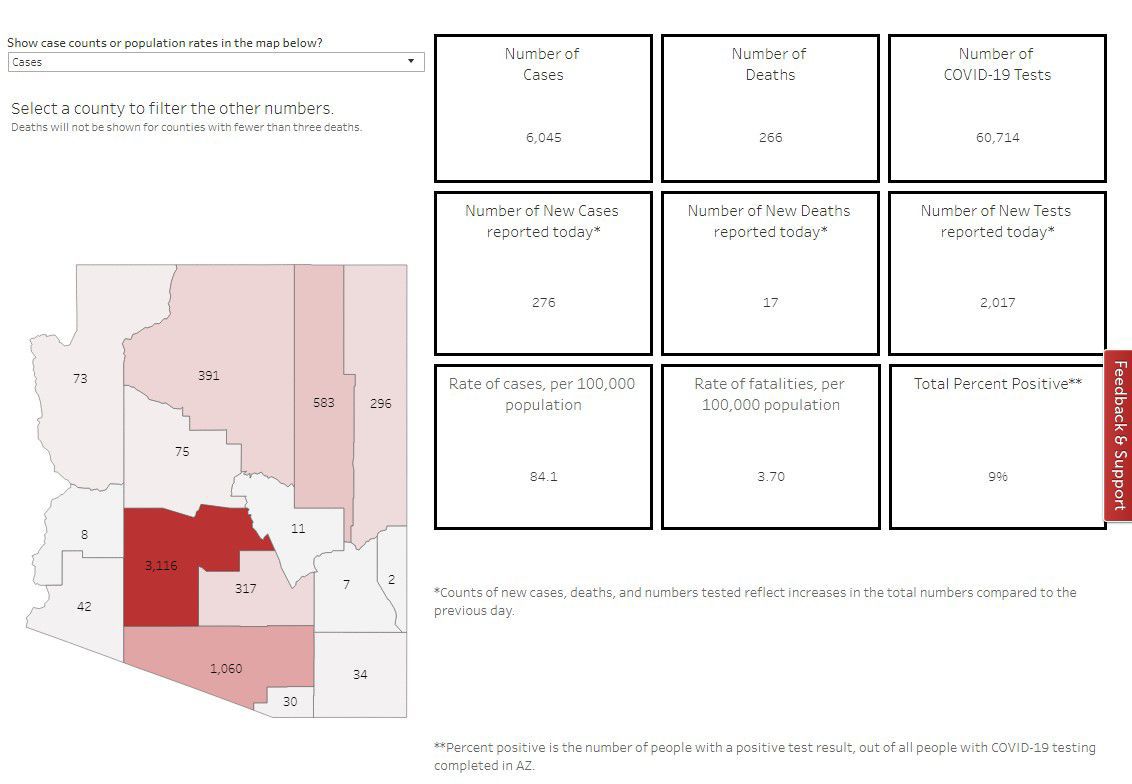 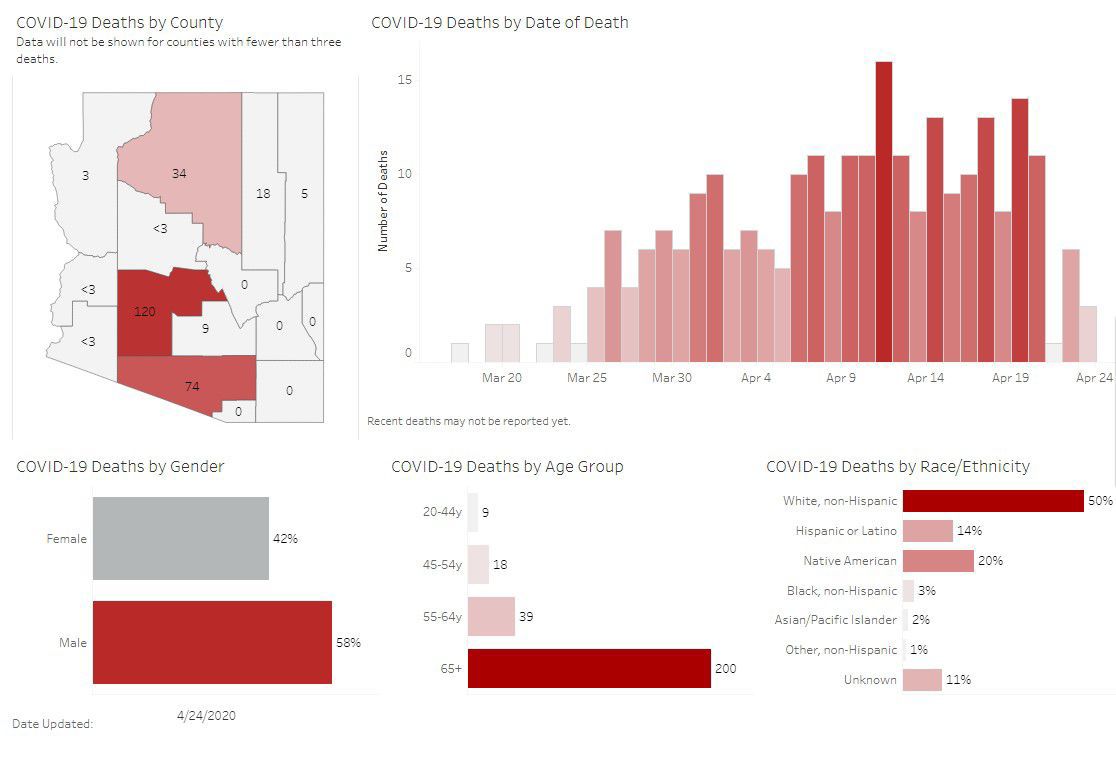 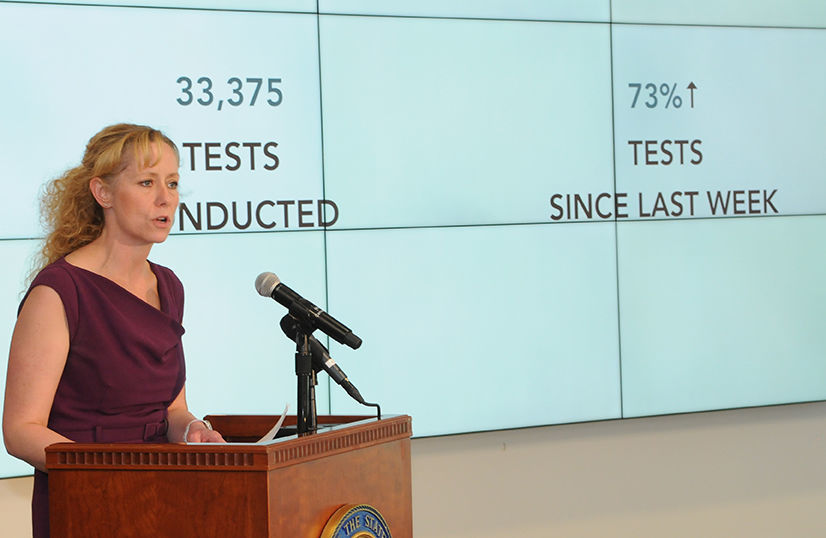 State Health Director Cara Christ at a briefing on COVID-19 earlier this month.

State Health Director Cara Christ at a briefing on COVID-19 earlier this month.

A surge in COVID-19 deaths and new cases in Arizona has underscored the tough choice facing Gov. Doug Ducey when it comes to a phased reopening of the economy.

On Friday, the state health department website listed 6.045 confirmed cases and 266 deaths. That include 276 new cases and 17 new deaths in a single day, with the rate of testing ramped up to about 2,000 per day. So far, Arizona has 84 confirmed cases and 3.7 deaths per 100,000 population.

Moreover, small scale studies testing for antibodies developed by people who have recovered from the infection suggests anywhere from 1 to 30% of the population has been infected – most of them recovering with few symptoms and no positive test. One random test of people in New York supermarkets found an infection rate of 14 to 20%. Most have found an infection rate of 2-3%. This means very few people will have developed immunities when the economy restarts.

The Arizona deaths have spiked in the past few days, reversing what had been an encouraging decline in the daily death toll. The state has also suffered a rising number of infections in nursing homes, where the virus has proved especially deadly.

Many national studies suggest the official figures have not captured all the deaths or all of the infections. One study in New York suggested the official numbers miss perhaps a third of the deaths, leaving it unclear what will happen if people go back to work and resume normal shopping – especially if they don’t maintain “social distancing” or wear masks when they leave the house.

Health experts said the state has so far administered 61,000 tests. However, safely opening the economy would likely require the capacity to do 100,000 tests per month. to enable anyone to determine whether they’re infected as well as everyone who comes in contact with someone who tests positive. Arizona consistently ranks near the bottom nationally in the number of tests administered per capita. A thorough testing regime would also involve finger-prick antibody tests to determine if someone has already had the virus and recovered. This could identify people who are likely resistant to a second infection.

This week, the State Department of Health Resources relaxed restrictions on tests, so anyone can ask a doctor or a health lab for a test even if they don’t currently have symptoms like a fever and a cough. It’s unclear under what conditions the state or health insurance would pay for a test for someone without symptoms. Studies suggest about half of people infected have few or no symptoms, but can still spread the virus. Banner Health has four drive-up test sites, but they’re all in Phoenix and Tucson.

Gila County on Friday had 11 cases and no deaths. That works out to 20 cases per 100,000 population. However, the county’s only having about 22 tests per day and only 518 tests since the pandemic began. Nonetheless, only about 2% of the tests are coming back positive – much lower than the 9% average in the rest of the state.

Navajo County had 583 cases and 18 deaths, with 517 cases per 100,000 population and 16 deaths per 100,000. About 24% are coming back positive, also a worrisome figure and evidence that testing remains limited to people with serious symptoms. On Thursday, the county had 19 new cases, five new deaths and 125 new tests.

Most of the Apache and Navajo County cases remain centered on the Navajo Reservation, one of the worst hit areas in the county. Native Americans in Arizona have a death rate about three times higher than the rest of the population. However, the Show Low zip code has 6-10 cases, the Pinetop zip code has 1-5 cases, Snowflake has 12 cases, and Eager 1-5. Cities on the edge of the Navajo Reservation had much higher counts, including 68 in Winslow, and 12 in the Holbrook area and 52 in Flagstaff.

Despite the spike in deaths and the continued rise in cases, the state’s hospital capacity remains adequate, according to the Friday figures. The state has filled only about 75% of its intensive care beds and only about 20% of its available ventilators throughout April. The number of hospitalized COVID-19 patients statewide has hovered at around 6500 to 700 since April 9. The state doesn’t provide detailed breakdowns on the reservations.

The virus continues to take the worst toll on the elderly, especially those with other conditions like diabetes, heart disease, obesity and breathing problems. People over 65 account for 75% of the deaths. People 55-64 account for another 15%. So far only 28 people younger than 54 have died – 10% of the total.

Infection and death rates per 100,000 in Arizona