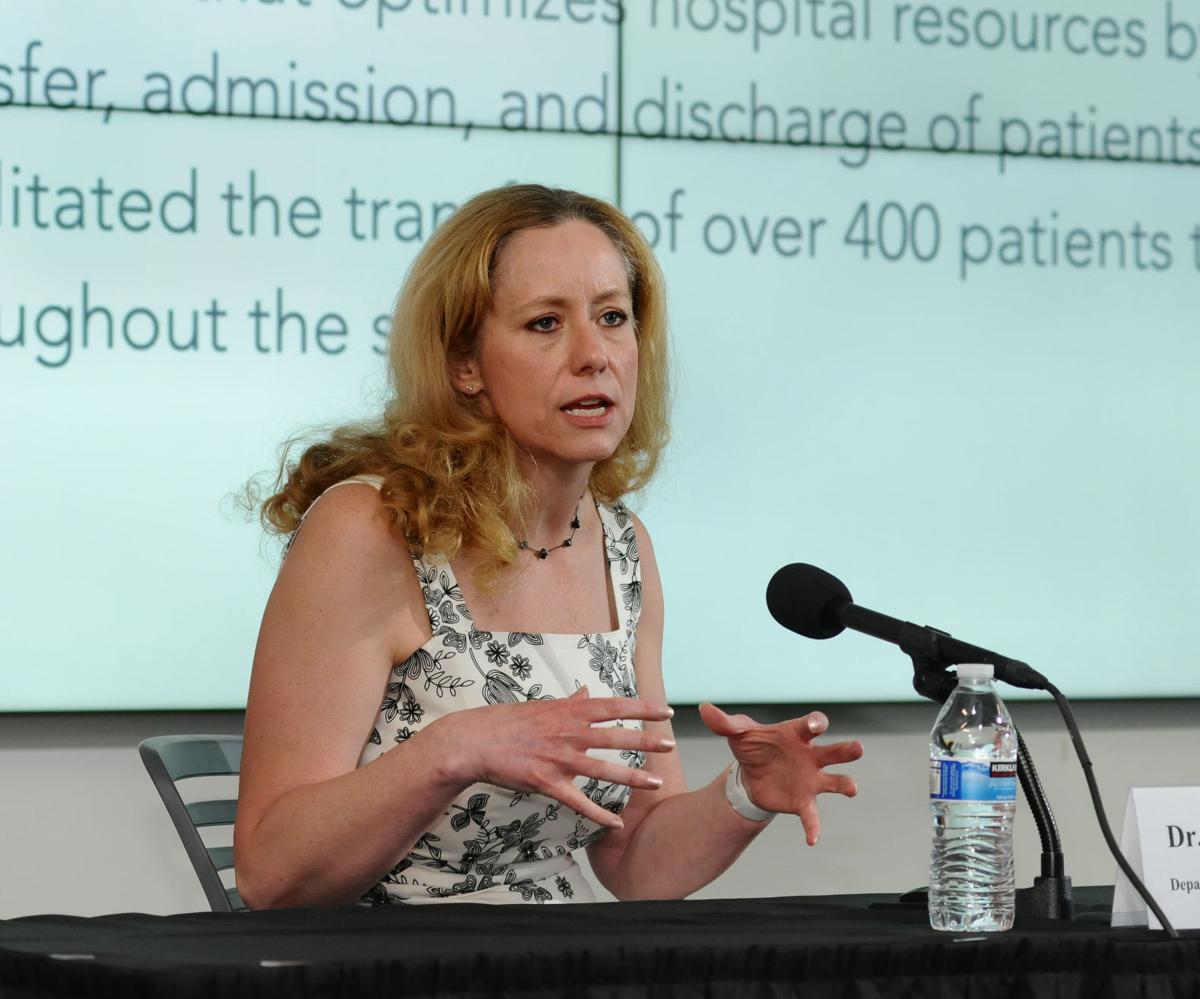 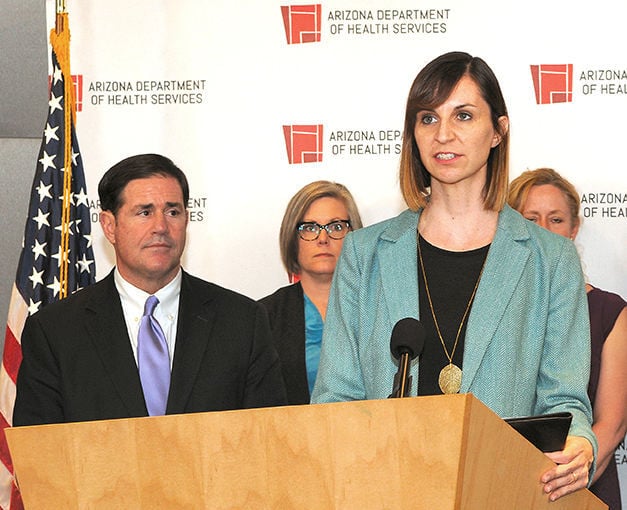 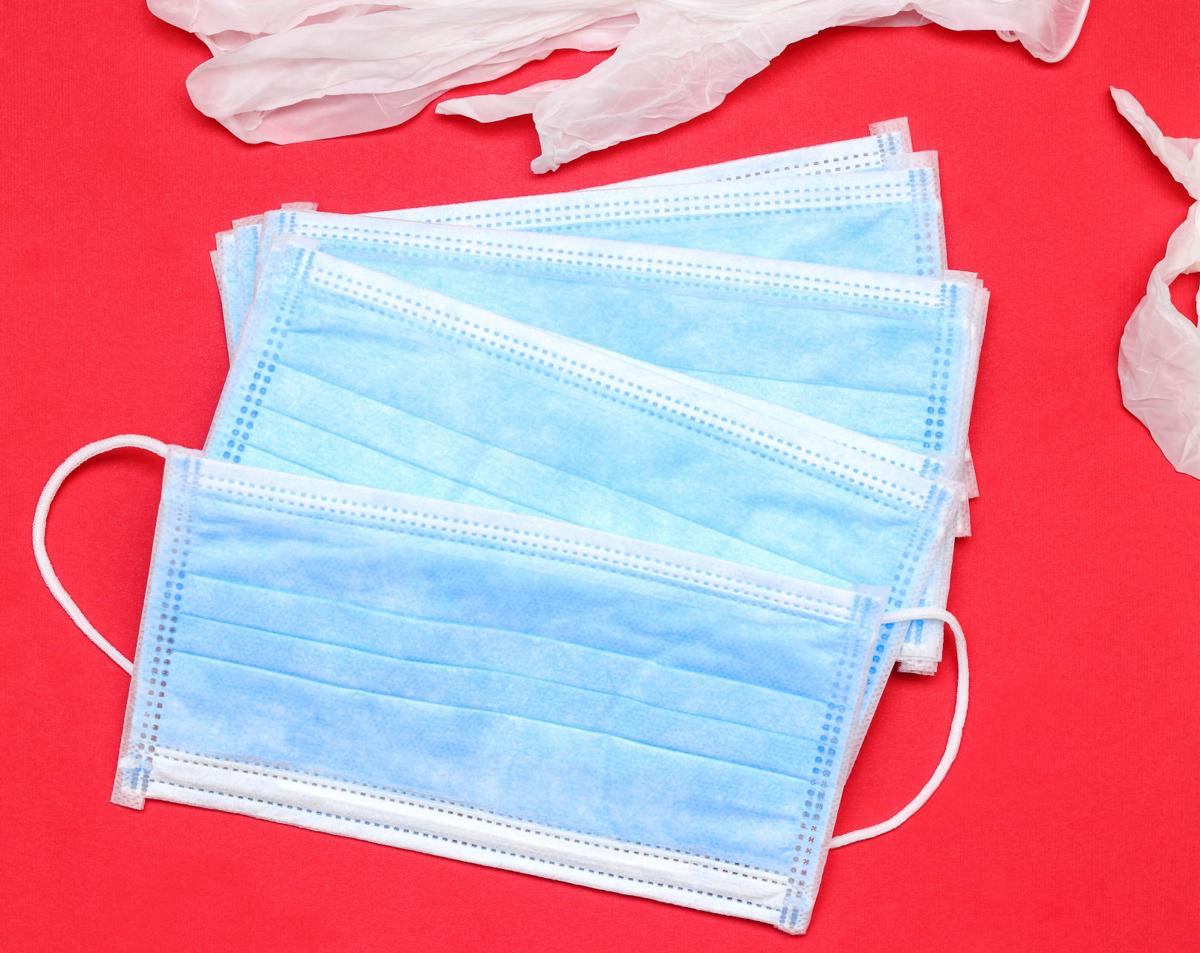 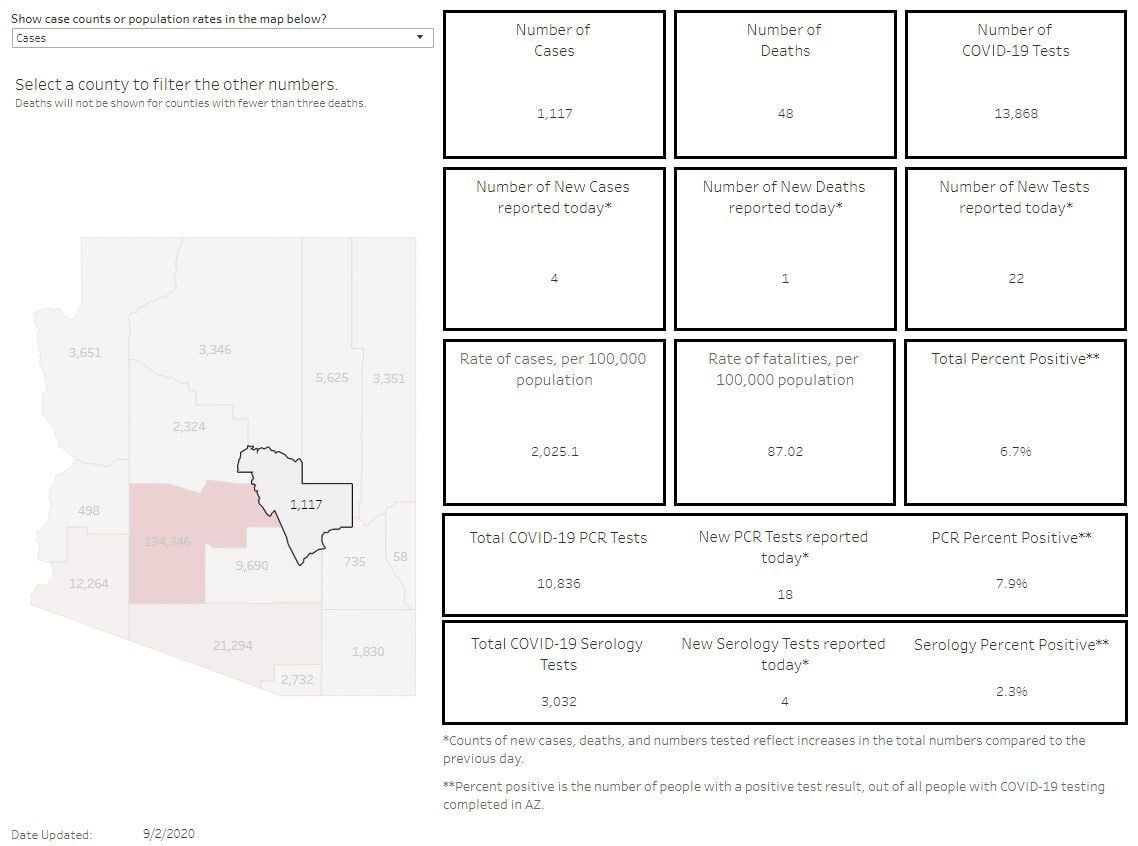 Gila County is now one of just five counties that doesn’t meet the state’s advisory benchmarks.

Worse yet — we’re one of the only counties moving in the wrong direction.

As of Sept. 3, Gila County had stalled in the decline in positive cases and actually ticked upward in the number of new cases. We only met the state benchmarks this week when it comes to the percentage of hospital visits by COVID-19 patients.

That might not make much immediate difference — since the Payson school board has decided not to open for in-person classes until Oct. 12 to avoid a disruptive stutter-step as the state benchmark numbers bounce around.

So here’s where Gila County stood early this week:

3) Two weeks with COVID-like illnesses account for less than 10% of hospital visits: Gila County has been below that threshold since July 19, and now stands at 3%.

Despite the continuing improvement in numbers statewide, infection rates remain generally much higher than the rates in other European and Asian countries that have successfully opened schools and contained new clusters of cases that appear wherever groups of people spend a lot of time together. Arizona continues to report about 1,000 new COVID cases and 40 to 60 deaths daily.

Perhaps more worrisome, Arizona doesn’t have the testing infrastructure that has played a key role in quickly containing school outbreaks in other countries that have restarted in-person classes.

Nonetheless, in some quarters the backlash is growing against continued restrictions on schools and businesses like bars and gyms, as well as the nearly universal appeal from public health officials to wear masks in public.

Over the weekend, about 100 protesters gathered in front of the state Capitol building to urge an end to restrictions on businesses as well as mask-wearing mandates.

State lawmaker John Fillmore compared the wearing of masks to the tattooing of victims of the Holocaust. “It’s reminiscent of the 1930s in Germany, when people on their own bodies were tattooed,” he told the crowd, according to a report in The Arizona Republic.

Arizona Attorney General Mark Brnovich has also challenged Gov. Doug Ducey’s modified order requiring some businesses to remain closed or operate at a reduced level until the virus drops below a certain threshold in that county. Several businesses have also launched lawsuits, seeking to overturn the restrictions.

Arizona suffered one of the worst outbreaks in the country after Gov. Ducey lifted his original stay-at-home order in mid May, after two months in which only essential businesses were allowed to operate. New cases soared after the reopening. Public health officials say the increasingly widespread use of masks in public and new restrictions that effectively canceled big public gatherings and changed the way businesses linked to superspreading events operated.

Through all of that, schools remained closed — preventing hundreds of kids, teachers and staff members from mixing in close quarters on a daily basis on every campus in the state.

Arizona so far has reported 206,000 cases and some 5,200 deaths, but the daily tally of new cases and deaths has dropped steadily in the past month. Experts say that the virus spreads mostly through the air in crowded situations. People without symptoms who don’t even know they’re infected have played a key role in “superspreader” events like concerts, church services, college parties, festivals, loud, tightly packed bars, cruise ships, nursing homes full of elderly people with compromised immune systems and other such settings.

Epidemiologists say the virus will likely continue to circulate at relatively high levels until the U.S. develops a vaccine — perhaps early next year. Until then, mask-wearing, avoiding crowds and superspreading events and other measures can limit the spread and avoid overwhelming the hospital system. Other countries that far more effectively contained the first wave of infections have nonetheless had to cope with a renewed rise in cases every time they eased restrictions — which includes clusters on reopened campuses.

Children — especially under the age of 10 — appear less likely to contract the virus or spread it. That’s much less true for teenagers. When children do get infected, they’re much less likely to have serious side effects. School reopening probably poses minimal risk for younger children, but a potentially significant risk to their families and teachers if a cluster develops in school without the means to contain it.

Other countries have minimized the risk of reopening schools by quickly identifying cases on campus and then testing and isolating everyone in close contact with someone who got infected. Most of those countries have community infection rates below about 10 per 100,000. Arizona’s benchmark considers 10 times as great a spread in the community to be safe.

Officials at the state Department of Education said schools still should take precautions even if they meet the benchmarks.

“This means hybrid instruction,” Ritchie Taylor of the state Department of Education told Capitol Media Services reporter Howard Fisher. That could include online instruction for some students and in-person classes for others, it could mean half-day sessions, two- or three-day a week classes or some other combination to avoid having students mingle with hundreds of fellow students in the course of the day.

“We do not have an ideal hybrid,” said Taylor. “That’s going to look different based on the size of the school, the resources available — but the goal is limiting the number of people that are congregating in any one space.”

The state guidelines discourage field trips, large gatherings and mixing lots of kids in spaces like the cafeteria during lunch. The state urges districts to “cohort” students — which means keeping them together throughout the day in class-sized groups. That’s much easier to do in elementary school than high school.

The vague state and federal guidelines, the school budget challenges and the lack of a testing infrastructure has put every school board in the hot seat.

Arizona State University has demonstrated some of the difficulties. Cases exploded when classes resumed several weeks ago. Some 1,000 students and 28 faculty have tested positive. Nonetheless, out of the 40,000 tests administered — only 2% have come back positive — well below the state benchmark of 5%-7%.

Reopening colleges and universities have become a new hotspot nationally, often because students gather and party both on and off campus. Clearly, that’s not as big a problem for K-12 students — especially elementary school students least at risk for either contracting or spreading the virus.

Payson schools started distance learning classes several weeks ago. Students have longer, 90-minute Google Classroom sessions, generally on alternate days. So students spend about five hours a day in digital classrooms and then do their homework. The district issued each student a Chromebook, using CARES Act relief money. A survey suggests that almost all of the district’s students now have access to the internet.

Studies last year suggested that the average student lost months of academic progress during the shutdowns and the abrupt shift to distance learning — especially in rural areas with spotty internet and a large number of low-income families.

A dozen parents and students recently wrote to the school board, appealing for a quick return to in-person classes. They said students have struggled to keep up with classes and feelings of depression and isolation. Elsewhere, studies have found that some distance learning classes end up with 70 students and a harassed and overwhelmed teacher, thanks to the ongoing, steadily worsening teacher shortage.

“I feel awful for those families who have several children at home of any school age,” said Payson Schools Superintendent Linda Gibson. “We also have this sense of how the start of school should look for kids, especially kindergartners and it is creating heartache in all of us. The decision is strictly driven by first the governor and second the benchmark data.”