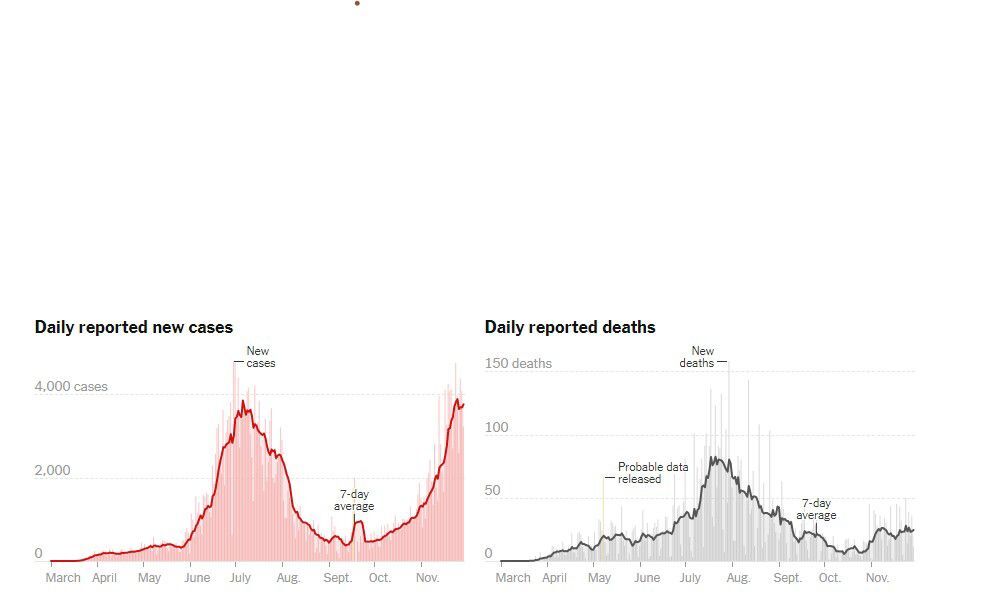 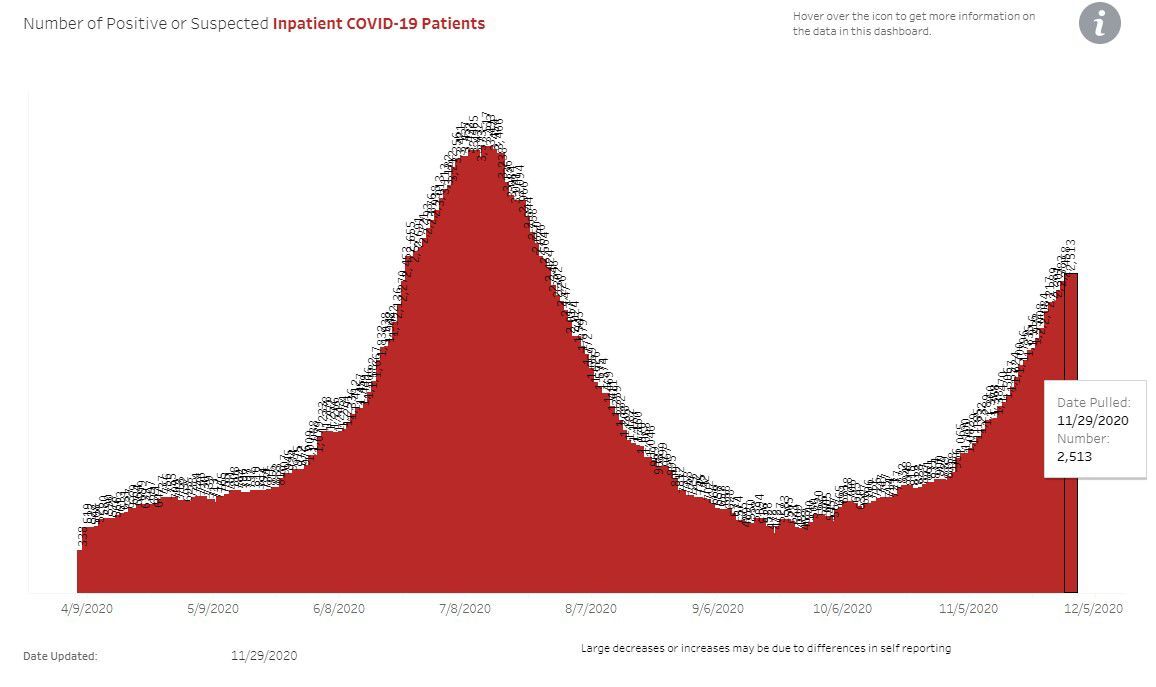 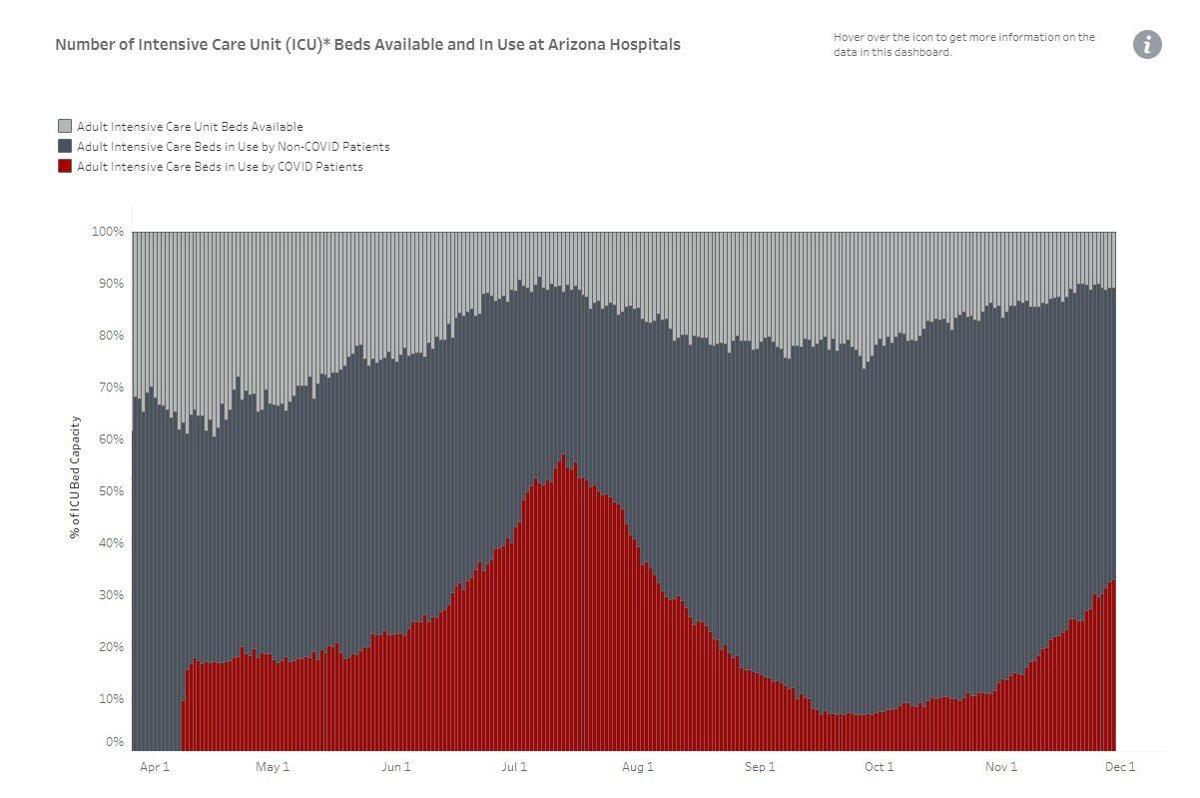 This stuff’s getting real.

And the cavalry — in the form of a vaccine — won’t get here until late December — even for the highest risk populations.

Gila County remains in the COVID hot zone, with a growing number of cases and failure to meet two of the three, advisory state benchmarks for reopening schools.

The county in the past week has averaged 80 new cases per 100,000 population each day.

Gila County still has far more cases than the statewide average of 54 per 100,000, according to the rolling seven-day average figures posted Monday on the globalepidemics.org website.

The two-week average in Gila County stood at 93 cases per 100,000 — that means things have actually gotten slightly better in the past week. However, epidemiologists worry that all the travel and household mingling over the Thanksgiving holiday could result in another surge in a week or two.

Graham County still has the highest infection rate in the state (107/100,000), with Gila, Santa Cruz, Apache and La Paz counties not far behind.

The good news — the COVID-19 death rate has dropped significantly since last spring. At that time, the death rate was 6.7% of the people who tested positive. Now it’s 1.9%, according to national figures. In part, this reflects more widespread testing since the onset of the pandemic. But it also likely reflects the breakthroughs in treatment that have improved hospital survival rates. Doctors have learned how to deal with COVID’s weird side effects, like inflammation in the lungs, blood clots and other problems. They’ve learned to avoid ventilators in favor of less invasive responses to trouble breathing, like steroids, turning people on their sides and stomachs and other innovations.

Banner Health officials warned people to wear masks and practice social distancing to prevent the latest surge in cases from overwhelming the health care system, possibly washing away the encouraging reduction in the death rates.

Forecasting tools suggest Banner’s licensed bed capacity will top 125% starting Dec. 4, according to a report this week in The Arizona Republic.

“Our forecast tool paints a very dark winter for us ahead. So I ask all of you to think about the mitigation that you can do to help us reduce this forecasting,” Dr. Marjorie Bessel, chief clinical officer for Banner Health said during a briefing on Monday.

As of Monday, 85% of all hospital beds and 89% of all ICU beds were in use. But COVID patients accounted for only about one-third of that use. During the peak of hospitalizations in July, the state ordered hospitals to cancel all elective surgeries. This freed up beds, but dealt hospitals a heavy financial blow.

A report by Arizona State University this week predicted that without new public health measures, holiday gatherings will likely cause an additional 600 to 1,200 COVID-19 deaths by Feb. 1.

So far, the state has not issued new restrictions on businesses, schools or gatherings. Towns like Payson have issued mask mandates, but the state has left the decision up to local cities, towns and school districts.

The state has even loosened the existing restrictions on schools, saying that even the advisory school benchmarks don’t apply so long as districts meet at least one of the three benchmarks for minimal spread.

Gee, we do a FREE COVID testing blitz of more than 500 individuals and the number of identified cases increase. SHOCKING.

We have 115 new cases in the state prison in Globe and the number of identified cases in the county increase. Again, SHOCKING.

One of the real problems is that Banner has been very misleading in how they categorize the stats. They were FORCED to admit this summer that the number of ICU patients FROM covid was actually only 16% of the total. They were very reluctant to be forthcoming on this issue until cornered on a conference call.

Remember, Banner and all other medical entities receive additional federal funding for every patient identified WITH covid, regardless of their main medical problem.

It seems the medical industry has learned quickly from the government school industry how to focus on only a part of their revenue stream while crying WOLF while they hide the total revenues. That is NOT shocking, but it is shameful.