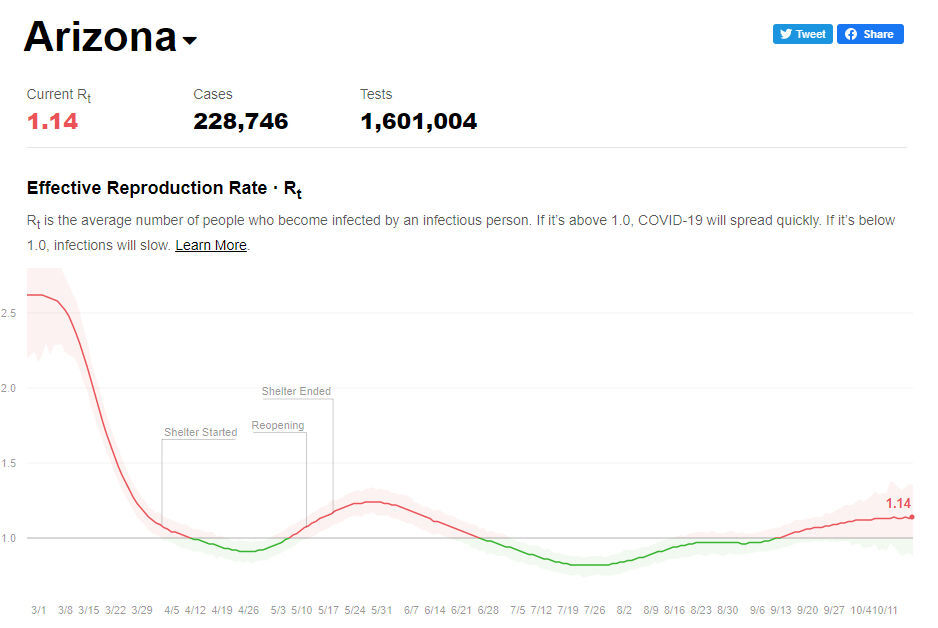 This chart shows the "reproductive rate" of the COVID-19 virus - which means the number of people infected by each person who contracts the virus. During the the periods when the state placed restrictions on businesses and local governments required masks in public, each new person infected on average less than one other person and the spread slowed dramatically. When the restrictions and mask-wearing lapsed, the infection rate rose to 1.17, which will likely result in a new spike in infections. 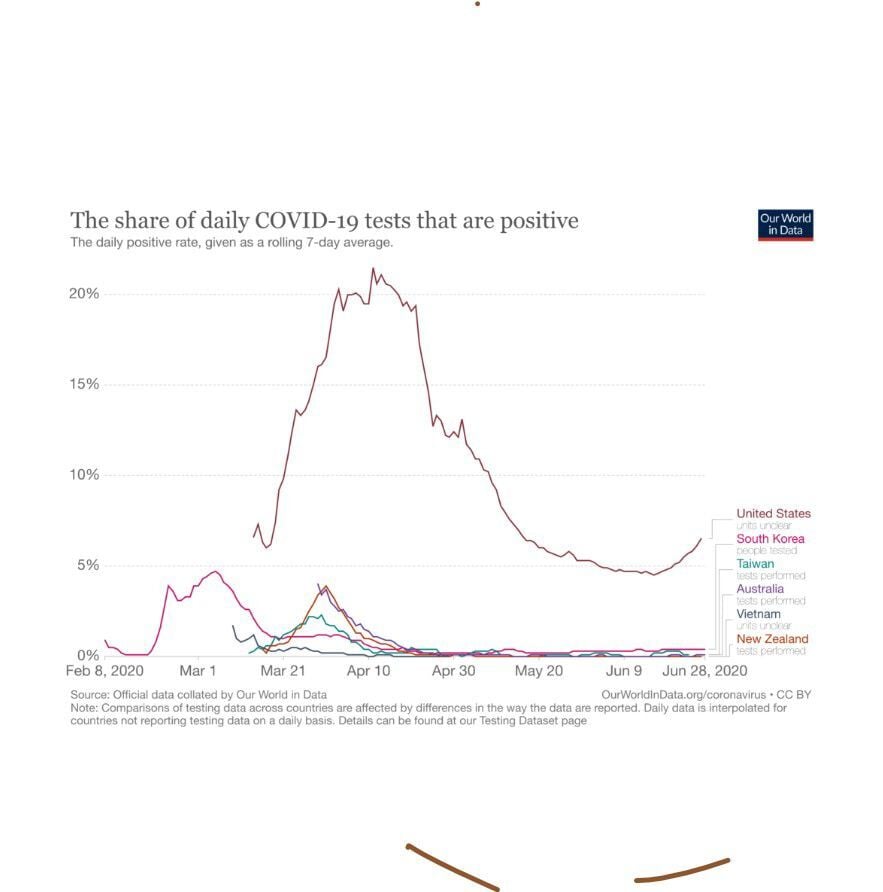 This chart shows the "reproductive rate" of the COVID-19 virus - which means the number of people infected by each person who contracts the virus. During the the periods when the state placed restrictions on businesses and local governments required masks in public, each new person infected on average less than one other person and the spread slowed dramatically. When the restrictions and mask-wearing lapsed, the infection rate rose to 1.17, which will likely result in a new spike in infections.

Gila County’s moving in the wrong direction when it comes to the pandemic, according to national databases.

In the past seven days, the county recorded 57 new cases per 100,000 population, the fastest rate of increase in the state according to a database maintained by Brown University, https://globalepidemics.org.

That’s a rolling average based on the average number of new daily cases for the past week.

By contrast, Maricopa County has in the past week averaged just 11 cases per 100,000 population.

The Brown University epidemiologists would rate Gila County as poised at the tipping point — primed for uncontrolled spread of the virus without a stay-at-home order, near-universal mask wearing in public, and widespread testing.

The increasingly fine-grained data suggest that COVID-19 is once again picking up steam across the state as people grow weary of social distancing and mask wearing, businesses fully reopen and schools resume in-person classes.

The Brown University database included contributions and recommendations from Harvard Global Health Institute, the Rockefeller Foundation and others.

The website suggests Arizona isn’t doing nearly enough testing to contain the virus. It also shows that Arizona does far less testing than most states and the nation as a whole is doing only a fraction of the tests necessary to contain the virus. Most of the Arizona tests focus on people with symptoms, with a modest number of additional tests for people who have had close, extended contact with someone who tests positive. For instance, schools generally lack the capacity to test everyone in the classroom when a student tests positive.

Epidemiologists say Arizona would need to increase testing tenfold to mimic the surveillance and contact tracing used in countries that have contained the spread of the virus.

As a result, every time the state relaxes its restrictions and towns like Payson drop their mask mandate, the virus rises again as each infected person spreads it to more people — often before they develop any symptoms.

One chart published on the Brown University site shows that the reproductive rate of the virus has risen into the danger zone in Arizona. During the stay-at-home period in April and May, each infected person spread the virus to about 0.7 other people and the spread declined. The rate of spread rose to about 1.4 infections per case and we hit a second spike. The state reimposed many restrictions and towns like Payson issued a mask mandate. The rate of spread dropped again, dwindling to about 0.5 new cases per infected person. As restrictions have eased and mask-wearing has declined, the reproductive rate of the virus has risen again to 1.14 cases per person infected. This will likely lead to a third spike in cases, concluded the researchers.

Meanwhile, the state’s data tracking also offers worrisome signs of a resurgence, although it’s sometimes hard to match up the numbers from the different databases.

The state’s school reopening benchmarks now show that Gila County meets just one of three criteria for the minimal spread of the virus that health experts recommend to safely reopen schools. However, those numbers are based on cases in the week of Sept. 20 — several weeks behind the Brown University database. Moreover, in some categories the statistics for school reopening benchmarks reflect the “central area,” which includes Maricopa County.

The state has provided somewhat different figures. The state’s data dashboard on Tuesday showed Gila County reported 24 cases and zero deaths. Since the onset of the pandemic, the county has recorded 1,772 cases and 65 deaths. Of the 18,000 tests administered, 7% have come back positive. Of the 34 test results on the most recent day reported, 8.2% came back positive.

Meanwhile, the Gila County Health Department this week reported yet another set of figures, based on different time periods and a decision to exclude cases on the San Carlos Apache Reservation from the county totals.

Those figures covered the week ending Sept. 27, a week later than the state’s school benchmarks, but still two weeks behind the national database. The Gila County figures included one new death, bringing the pandemic total to 49, with a total of 786 cases reported. The data showed that for the week ending Sept. 27, 11.7% of the tests came back positive — far above the 7% target for even a hybrid reopening of schools included in the state’s benchmarks.

The Brown University website indicated that countries that have contained the virus and more or less resumed normal life have positive test rates well below 3%.

On the other hand, Payson accounts for 34 of the 49 deaths recorded since the start of the pandemic, which reflects clusters in nursing homes here as well as the higher average age of the population in northern Gila County. Star Valley, Tonto Basin and Pine have each reported one death — while Globe has reported just nine deaths.

So far in Gila County, 196 of the diagnosed cases have been in nursing homes and assisted living centers, five in schools, four in jails. County health workers have investigated 1,411 cases, put 1,701 people in quarantine and tested 1,413 close contacts. Care facilities account for about 25% of cases.

Over two-thirds of the deaths in Payson occurred in one nursing home that was caused by reports of criminal malfeasance by members of the facility administration.

I know of NO ONE who has even been hospitalized with this created scam. If a person is not sick that should not be a figure even put in print.

When people who die from being shot, involved in an accident, in hospice from ene of life illnesses, to count them as victims of COVID is an historic propaganda fake news story.

Remember, without testing there were 30 times more people who had the flu last year than COVID this year.