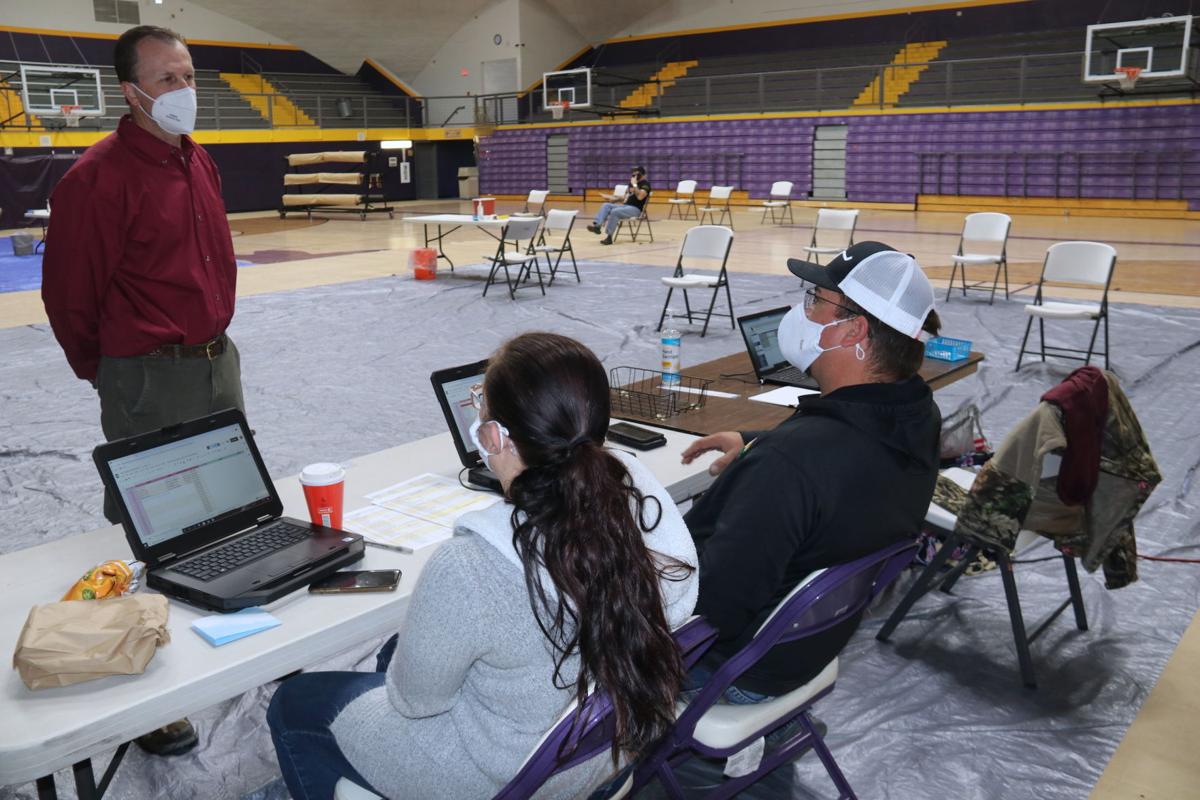 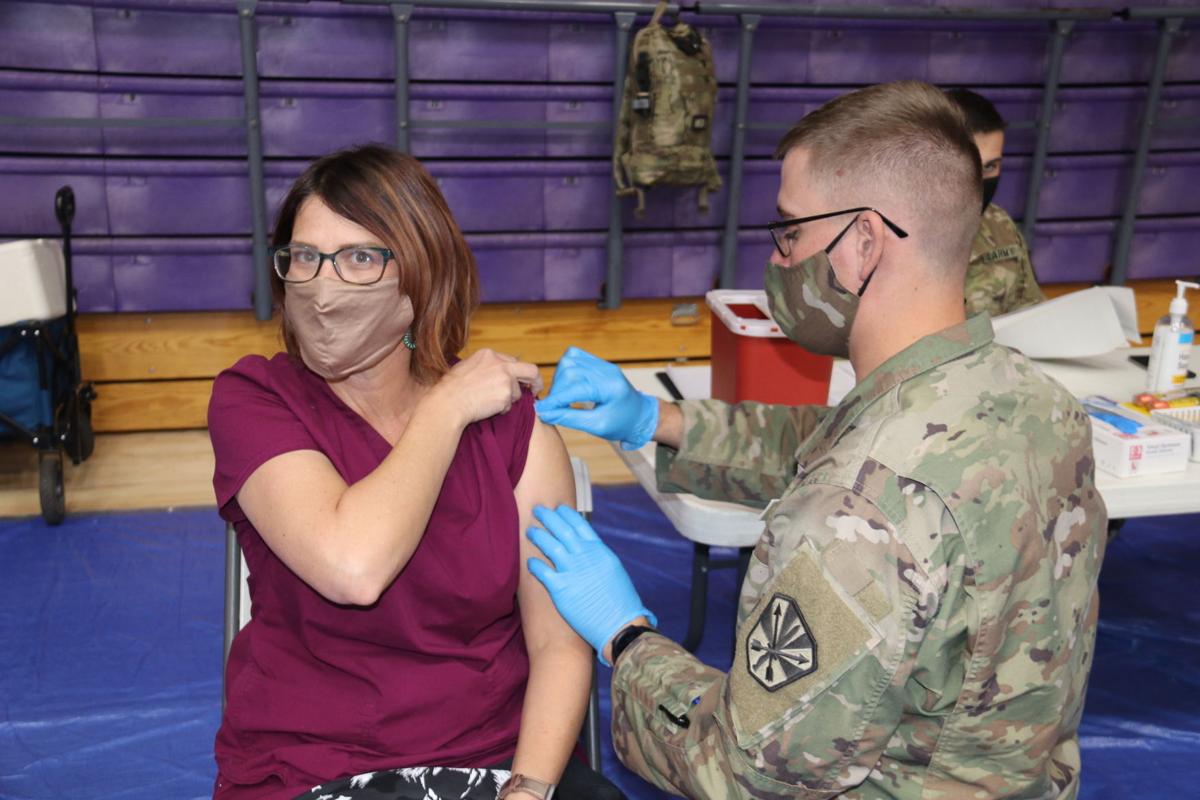 Kelsi McMartin, a behavioral health consultant at North Country Healthcare, receives a COVID vaccination Tuesday at Payson High School. Specialist Matthew Bryant administered the shot. Additional vaccination events will be held, but health officials ask for the public’s patience as they work through the first phases of the CDC recommended vaccine rollout. 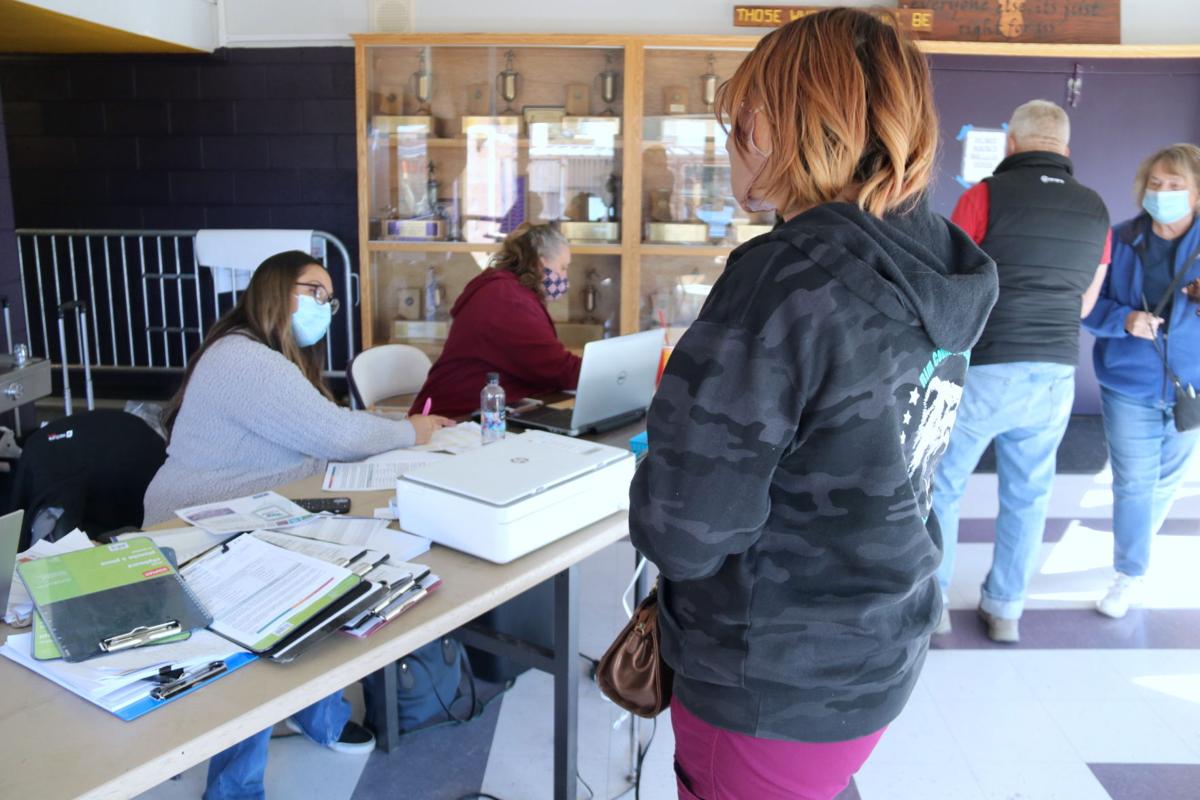 Registration at the COVID vaccination event held at Payson High School this week. 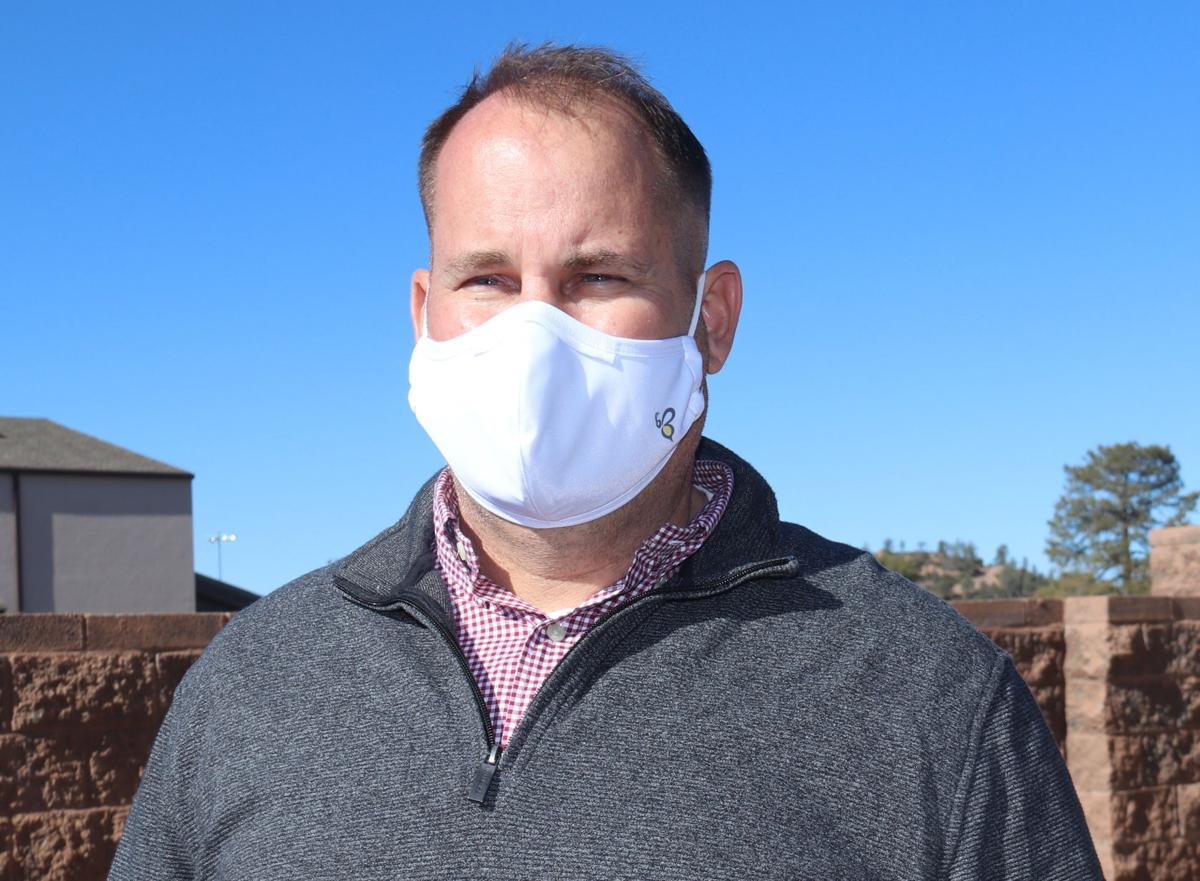 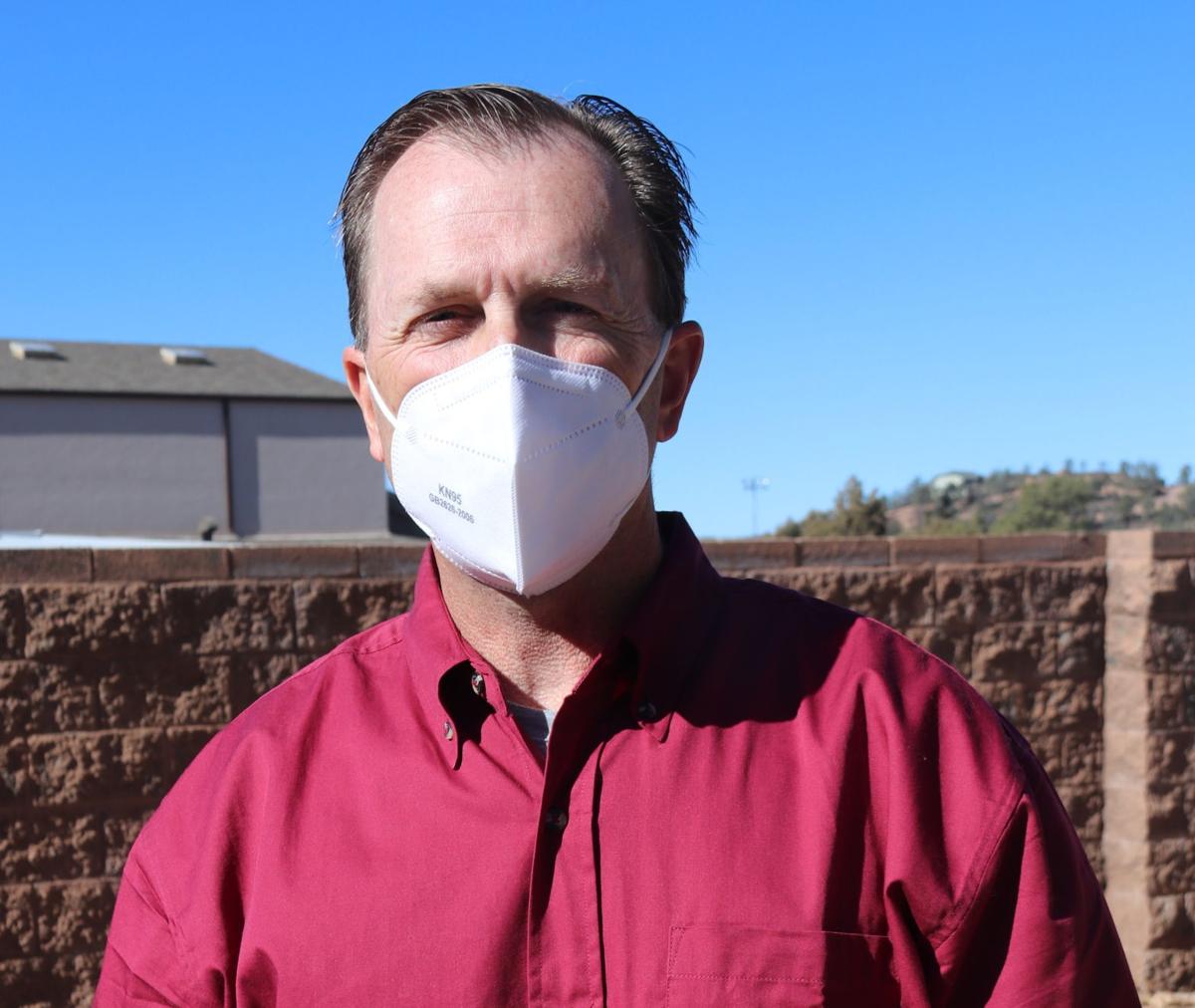 Kelsi McMartin, a behavioral health consultant at North Country Healthcare, receives a COVID vaccination Tuesday at Payson High School. Specialist Matthew Bryant administered the shot. Additional vaccination events will be held, but health officials ask for the public’s patience as they work through the first phases of the CDC recommended vaccine rollout.

Registration at the COVID vaccination event held at Payson High School this week.

The county focused on vaccinating those in Phase 1A – public safety officers and healthcare workers, but also welcomed teachers and those older than 75, the start of the Phase 1B group. Gila County was one of only two counties in the state to move into phase 1B this week.

The event launched the rollout of one of perhaps the most ambitious mass-vaccination campaigns in U.S. history as Gila County health workers administer the first 1,800 doses of Moderna’s high-tech vaccine against the virus that causes COVID-19, which has proven 95% effective with minimal side effects in clinical trials.

The county is following federal Centers for Disease Control recommendations when it comes to the priority list for the precious vaccine, which offers the shot first to essential, front-line workers as well as high-risk groups, like the elderly and nursing home residents.

People in the 1A group all got phone calls from the county urging them to set up an appointment before arriving for their first of two shots. The county decides when to move on to the next group eligible to receive the vaccine based on Centers for Disease Control rollout suggestions, said Michael O’Driscoll, director of Gila County Health and Emergency Management.

The CDC has urged health officials to move as quickly as possible through the risk groups, responding to the unexpectedly slow rollout of the first 20 million doses of the vaccine nationally. Shipping the super-chilled doses to county health departments has proven easier than actually getting people to clinics to get their shot. Moreover, the nation probably won’t have enough shots for the general public until late spring or early summer.

County officials promised to use the county’s websites and the media to make sure people know when they can get the shot.

O’Driscoll and Todd Whitney, incident commander for the COVID-19 response, were on hand to watch the volunteers, county workers and National Guard medics administer the vaccine Jan. 5.

Whitney has created plans on how to roll out vaccinations in an orderly manner, as much more goes into the process than the shot.

“We schedule four appointments every 15 minutes,” he said.

In that 15 minutes, staff have to fill out application paperwork so the state can keep track of who has gotten a shot, watch for side effects and schedule the next shot.

Once a patient received their shot, they had to wait at least 15 minutes to make sure they had no ill effects. Most people report few side effects, but some people have suffered flu-like symptoms for a day or two. Those with additional health risks were asked to stay for another 15 minutes. Both suggestions came from the Centers for Disease Control, said O’Driscoll and Whitney. So far, the worst side effect the county has heard of was a headache.

Those 15 minutes also gave the county time to complete the registration process and set up the next appointment for a follow-up shot.

Evidence suggests that the initial shot provides 50 or 60% protection. The second shot boosts the protection to 95%.

O’Driscoll explained the county has to make sure at least 7 to 10 people are ready for a shot because the vaccine only remains potent for an hour once they open the vial.

“Each vial gives us about 10 shots,” said O’Driscoll.

Whitney and O’Driscoll were happy that Gila County received a batch of Moderna vaccines, rather than the Pfizer vaccine.

Another challenge, the two officials had to plan for social distancing. O’Driscoll was part of a mass vaccination effort during the H1N1 pandemic, but that virus did not spread as easily as COVID-19 does. He said it was much easier rolling out the vaccine under those conditions.

Whitney said the Wilson Dome provided the space to keep everyone safe, but he doesn’t see this same setup once the weather gets warmer and the number of vaccines delivered increases.

Whitney observed one such clinic in Gilbert administered 4,000 vaccines in one day as residents sat in their cars.

The state allocates doses of the vaccine based on population, said O’Driscoll.

So far, O’Driscoll reports Gila County has received 1,800 doses of the vaccine, but it’s unclear how many more shots will arrive and when.

The county health department and its partners will administer the shots, including pharmacies and the MHA Foundation – if they can prove they can store and deliver the vaccines.

The effort remains slow, however.

So far, the county has received enough doses to vaccinate about 3% of the population.

His staff is working to reach out to the community to schedule appointments, keep public information flowing, do contact tracing and coordinate clinics.

“As we move into the 1C group, we’ll set up a call center,” said Whitney.

The health department will also utilize the media, social media and its website to spread the information on when to contact the county and its partners to set up an appointment.

Right now, the health department hopes to finish vaccinating all those in Phase 1 by mid-February.