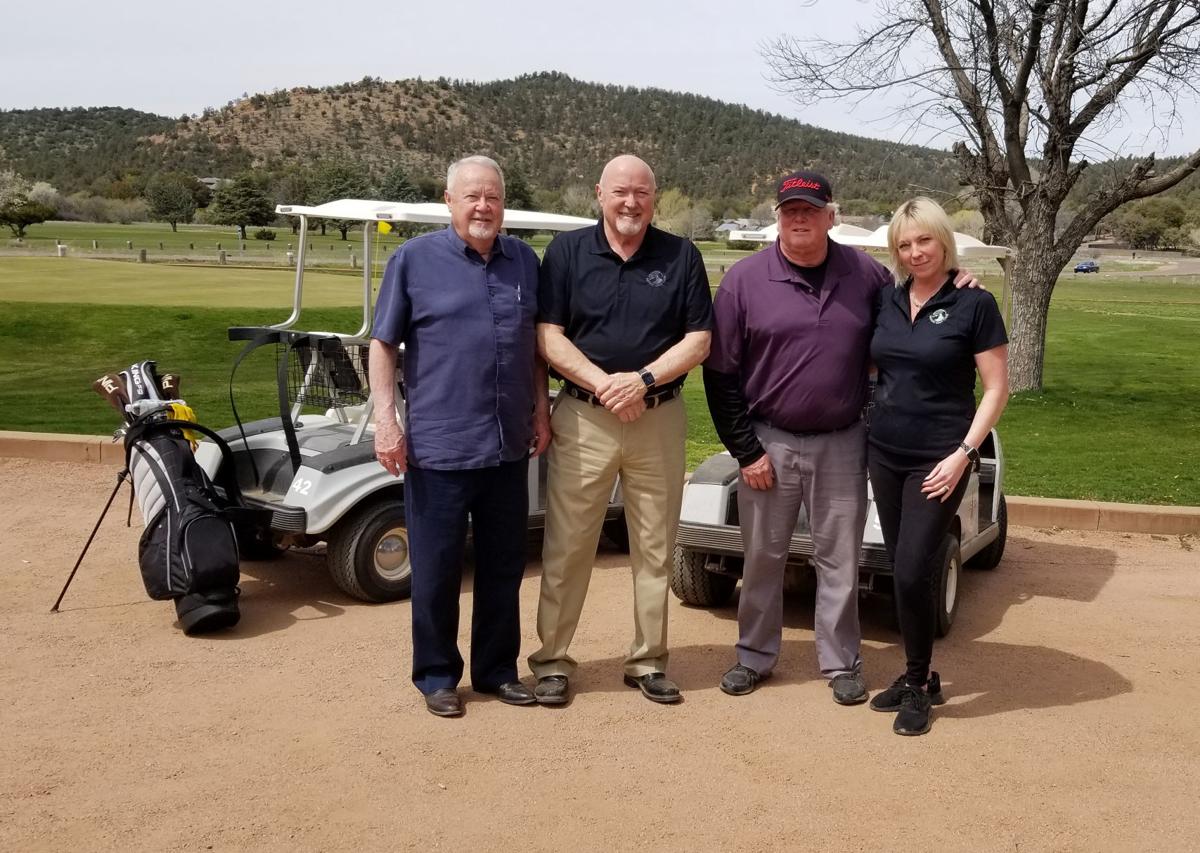 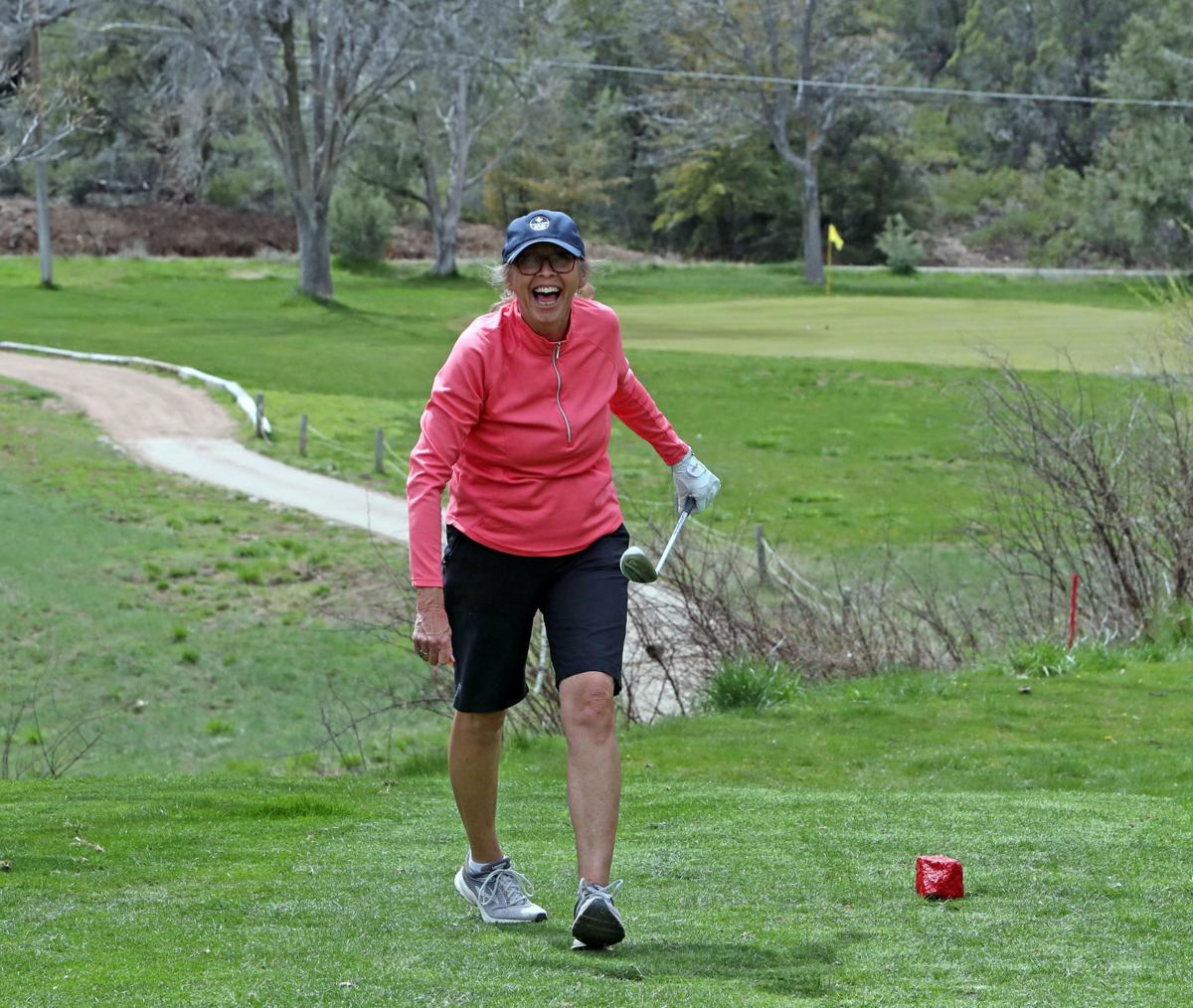 Ann Adams reacts to a great tee shot on No. 17 at Payson Golf Club on March 31. 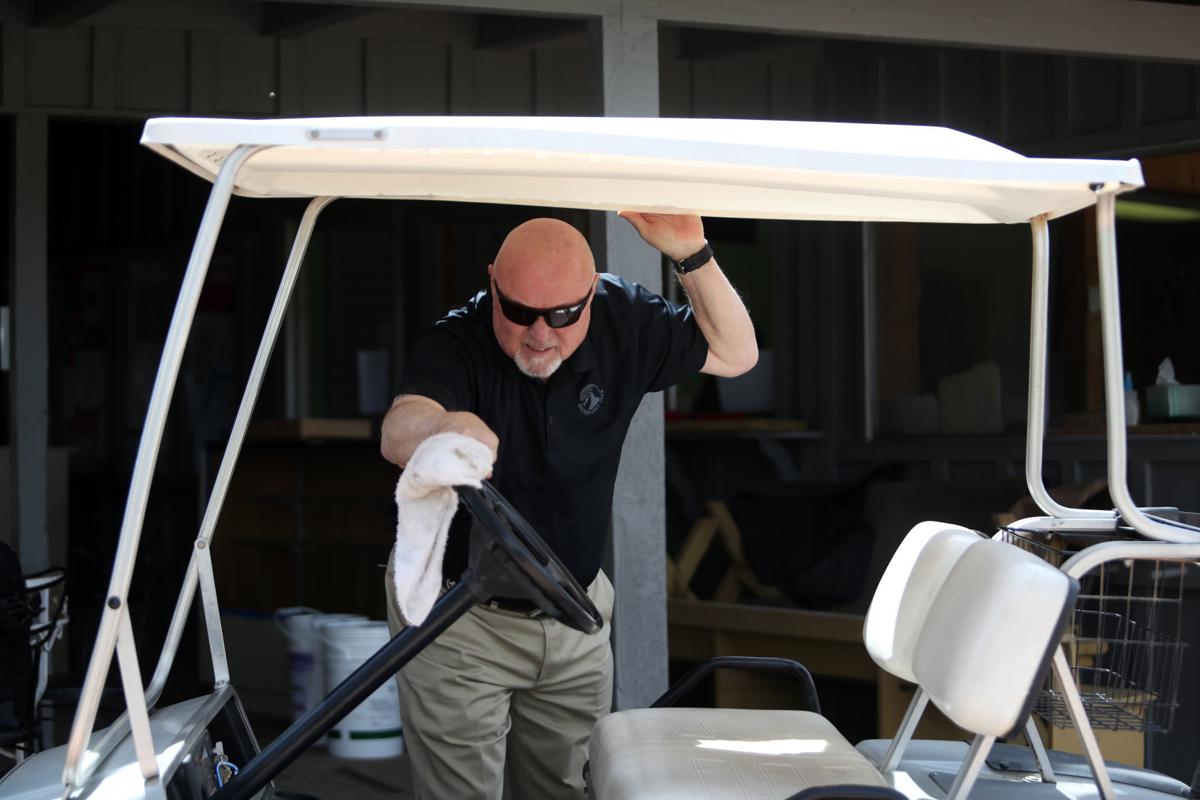 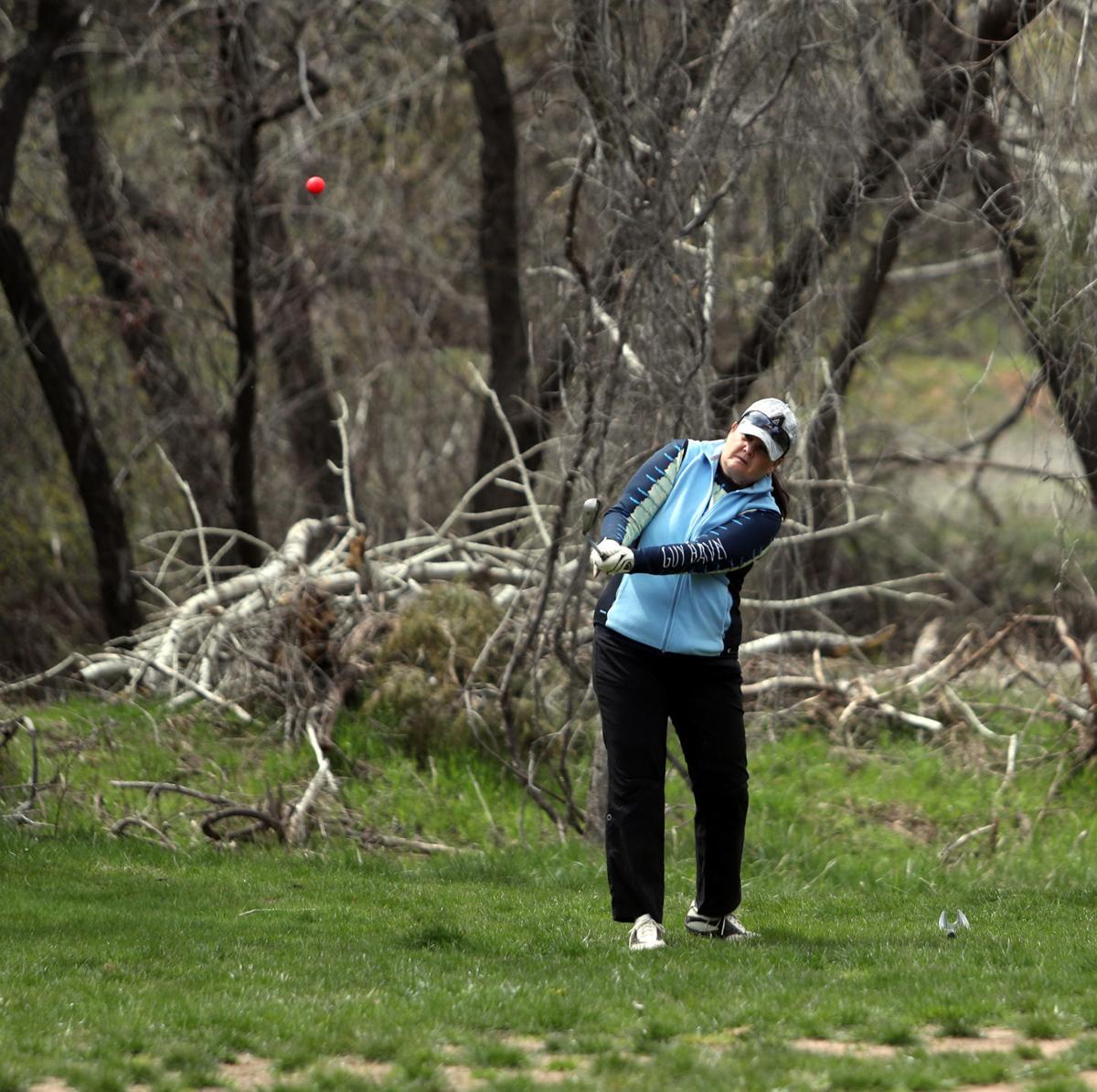 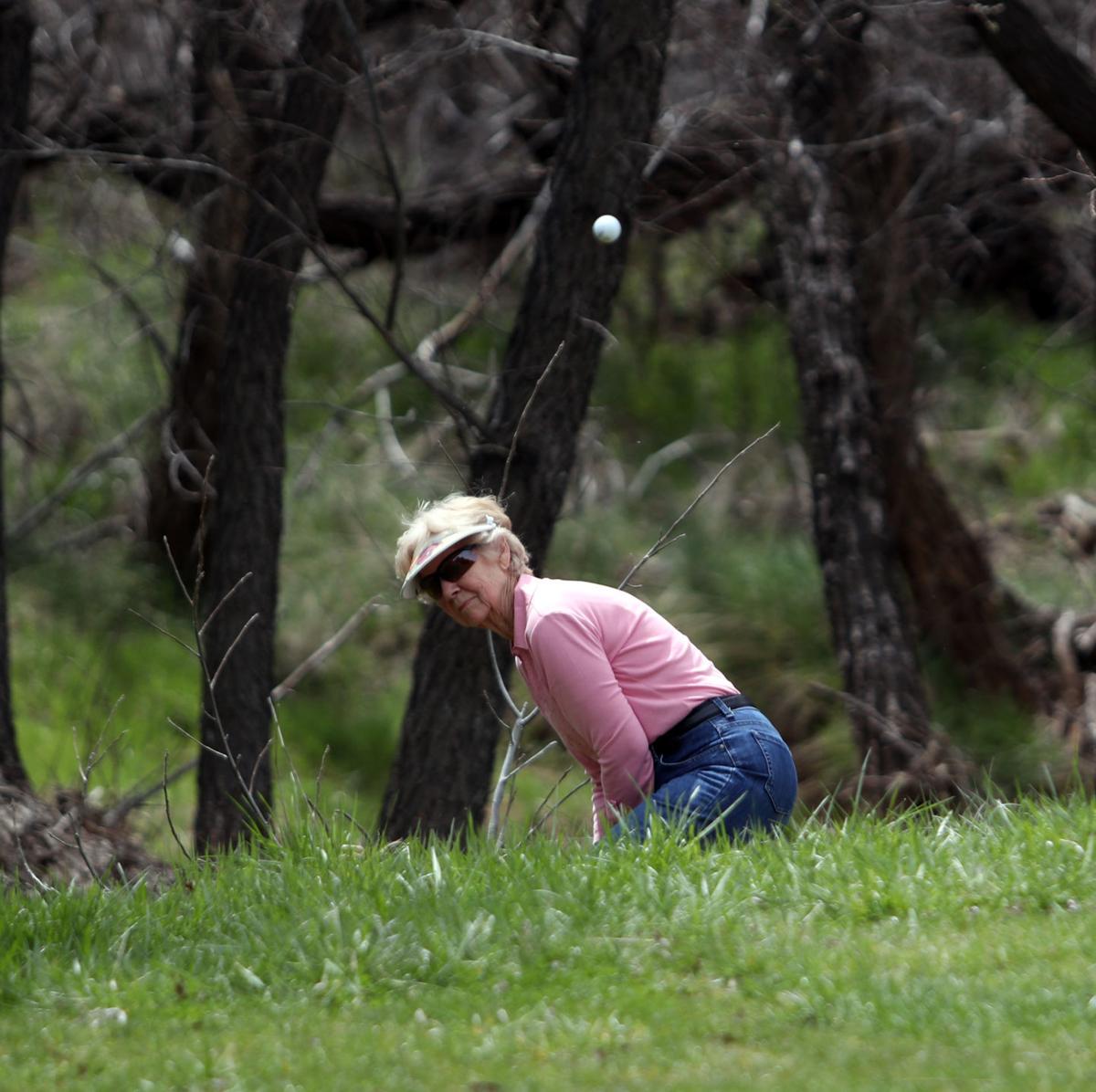 Mary Jones watches her wedge shot from the rough at Payson Golf Club on March 31. 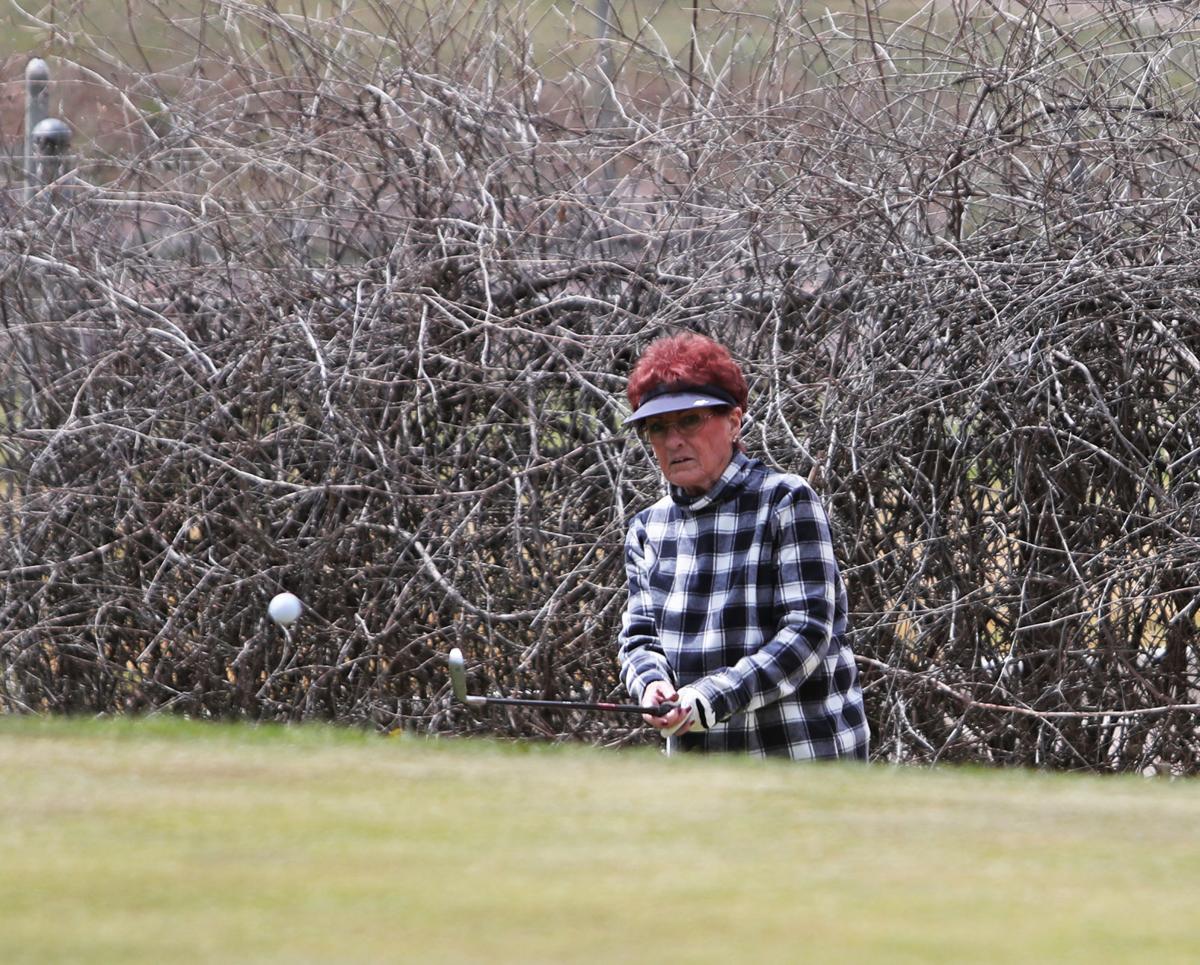 Jan Burns watches her chip shot on the No. 16 green at Payson Golf Club on March 31.

Ann Adams reacts to a great tee shot on No. 17 at Payson Golf Club on March 31.

Mary Jones watches her wedge shot from the rough at Payson Golf Club on March 31.

Jan Burns watches her chip shot on the No. 16 green at Payson Golf Club on March 31.

Jan Burns watched her drive from the No. 17 tee land a foot from the cup.

“That’s my best drive on that hole in a while,” she said.

Well, it’s difficult to get much closer to the pin other than sinking a hole-in-one.

There were no high-fives from her three golf mates with the Payson Women’s Golf Association.

They all shouted their amazement at the shot. “I’m giving you an air high-five,” said one of the foursome out for 18 holes of golf at Payson Golf Club prior to the April 7 opening day of the PWGA season opener.

In this difficult time where bats, gloves, baseballs, softballs and basketballs have been packed away with the COVID-19 pandemic spreading like wildfire and social distancing the norm, golf is about the only game in town.

Gov. Doug Ducey included golf courses on the list of essential businesses, allowing them to avoid the shutdown that’s occurred in most other sports.

The game sure seems essential to Burns and her playing partners, Ann Adams, Mary Jones and Debbie Nichols.

“It’s good to be out here getting some exercise,” Burns said. “And we’re staying (the recommended) six feet apart.”

Burns is so thankful for these once-a-week outings, it would be difficult if the course closed for an extended period.

“Well, then you’re just sitting home by yourself, at least I am, me and my dog,” said Burns, a widow. “This is much better.”

Jones is also a widow who looks forward to playing the game with friends.

“It’s wonderful to get out of the house,” she said. “I haven’t golfed since December. I’ve been looking forward to this.”

Adams followed Burns’ memorable tee shot on the 17 with one nearly as impressive. Again, no high-fives, just big smiles.

“It doesn’t seem any different from going out into the forest and taking a hike with my dog,” Adams said. “I just have my clubs with me. We’re all maintaining a safe distance.”

Three of the four women walked the 18-hole course on Wednesday. Nichols drove a golf cart. She deals with a knee issue that’s made a cart a necessity. She normally shares the cart but won’t until restrictions end. She said she’d have a tough time if the course had to close even temporarily because of the virus.

“I’m more passionate about golf than (some) because this is my only hobby,” Nichols said. “I would be very disappointed and sad because not only do I not get to come outside and exercise, but I don’t get to see my friends.”

Nichols, who golfs three times a week, said keeping the six feet distance wasn’t an issue. However, like so many of us who touch our face then realize we shouldn’t have done that, she had one issue on Tuesday.

“I accidentally picked up one of their clubs today and I’m like, ‘Oh sorry, we’re not supposed to touch it,’ she said. “It’s rude to walk over somebody’s club and not pick it up.”

A group of four men playing a round a few holes behind the women each drove their own golf cart, something almost unheard of before PGC implemented a new one-person-per-cart policy to slow the spread of COVID-19. They’ve cut cart rental prices to assure everyone can have their own.

PGC is also sanitizing all carts between golfers.

Bob Jackson bought the course in December and has big plans for its future, including building 60 townhouses off of Country Club Drive along the first hole.

The restaurant is undergoing a remodel and should be ready to open in a month or two. But that’ll depend on how long the current order barring Gila County restaurants from inside dining lasts.

He said operating a business during these times is challenging.

“It’s as healthy as anything could be,” Jackson said. “We think it’s good for people to be out.”

Former Town of Payson economic development specialist Bobby Davis is PGC’s new marketing and membership director. Jackson hired Chuck Dodd, who has 32 years in the game, to be PGC’s new teaching pro, something they didn’t previously have. He’s in charge of golf course operations.

Natasha Walrath is the food and beverage manager.

Jackson said it will remain an 18-hole course. Besides the planned townhouses and restaurant remodel, the new owner said they’ll add a building to house a fitness center, a community conference room, a second restaurant and outdoor dining area and restrooms.

“It’ll be a small conference room, but hopefully it’ll accommodate a lot of community events,” Jackson said. “This will be a community golf course.”

And once it’s completed, you’ll arrive to a much different view.

“The front of the clubhouse will look different,” Jackson said. “We’ll have a roundabout and gazebos out there, so it looks nice and inviting. We’re basically gradually improving the golf course and the experience.”

Beautification projects are ongoing at the club. Volunteers from both the men’s and women’s associations are helping.

Some projects the volunteers have been working on include trimming trees to allow for viewing of the driving range from the clubhouse and painting ball markers.

“We’re also working on youth in the community,” Jackson said. “We think it’s really going to promote golf. We want kids to take up golf.”

With Dodd onboard, PGC will offer individual lessons and hold clinics when COVID-19 restrictions allow them.

He envisions the club attracting more women. “We think there is a good market for increasing the number of women that play,” Jackson said.

“We’re doing all the things that we need to do to improve the course,” Jackson said. “We’re very optimistic. We feel very comfortable that we will move ahead with a very much-improved course and improved experience and then a dining experience.

“And the neat thing about it, this will be a community course. We are open to the public, but we will also have social members and golf members.”

The golf course already looks much better. Painting the club house and cleaning up the brush make a big difference. I'm hopeful that the golf pro can help those who slice the ball and hit my house on the back 9. :)

The public golf course offers a good outlet for being hunkered down; however, the only reason it's not shut down is the elites in the gated communities would have to close up also and the cheap water Uncle Kenny gave them would dry up?