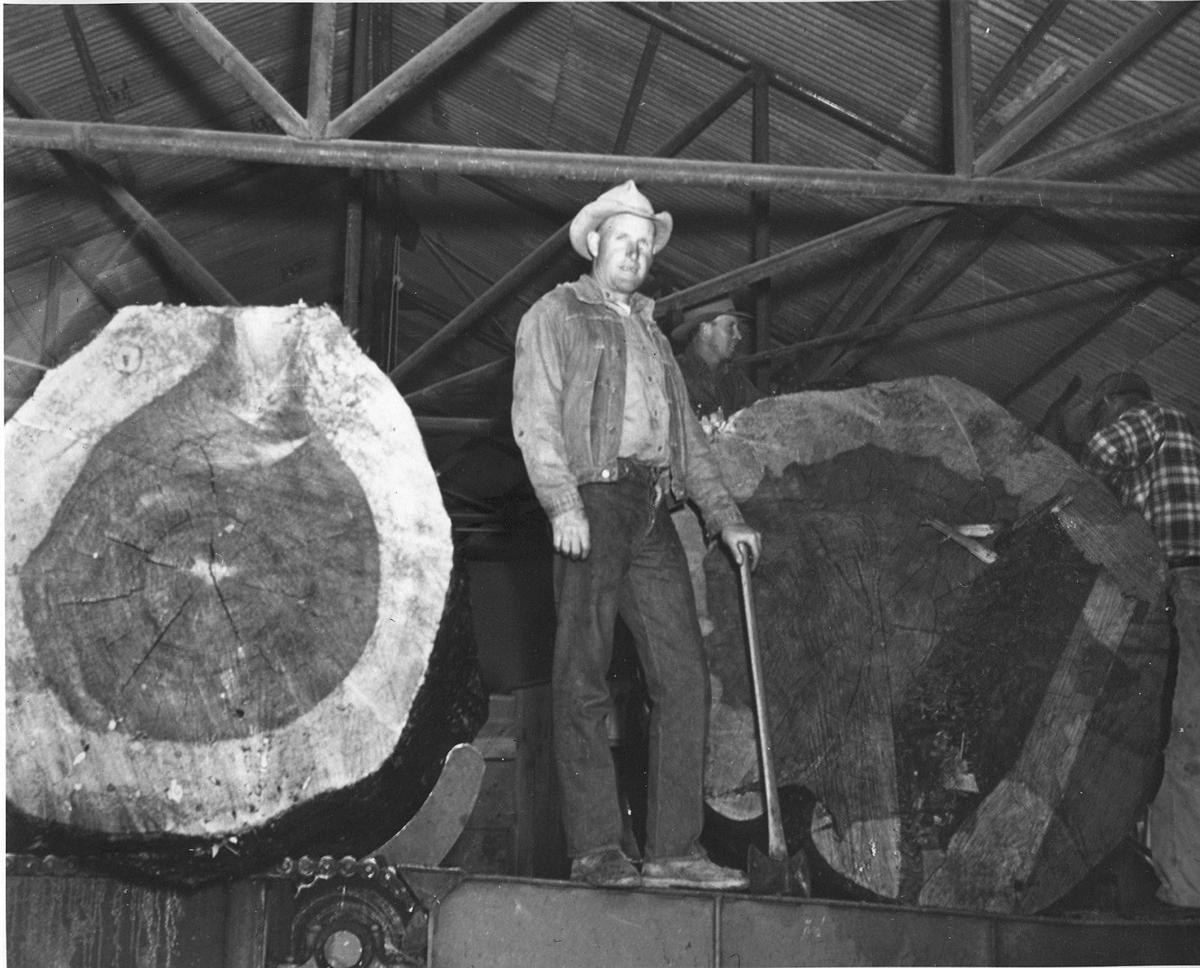 The Owens Brothers lumber mill in Payson where the Sawmill Theatres now stands was an economic mainstay, but relied on the giant, old-growth trees now scarce throughout the forest. 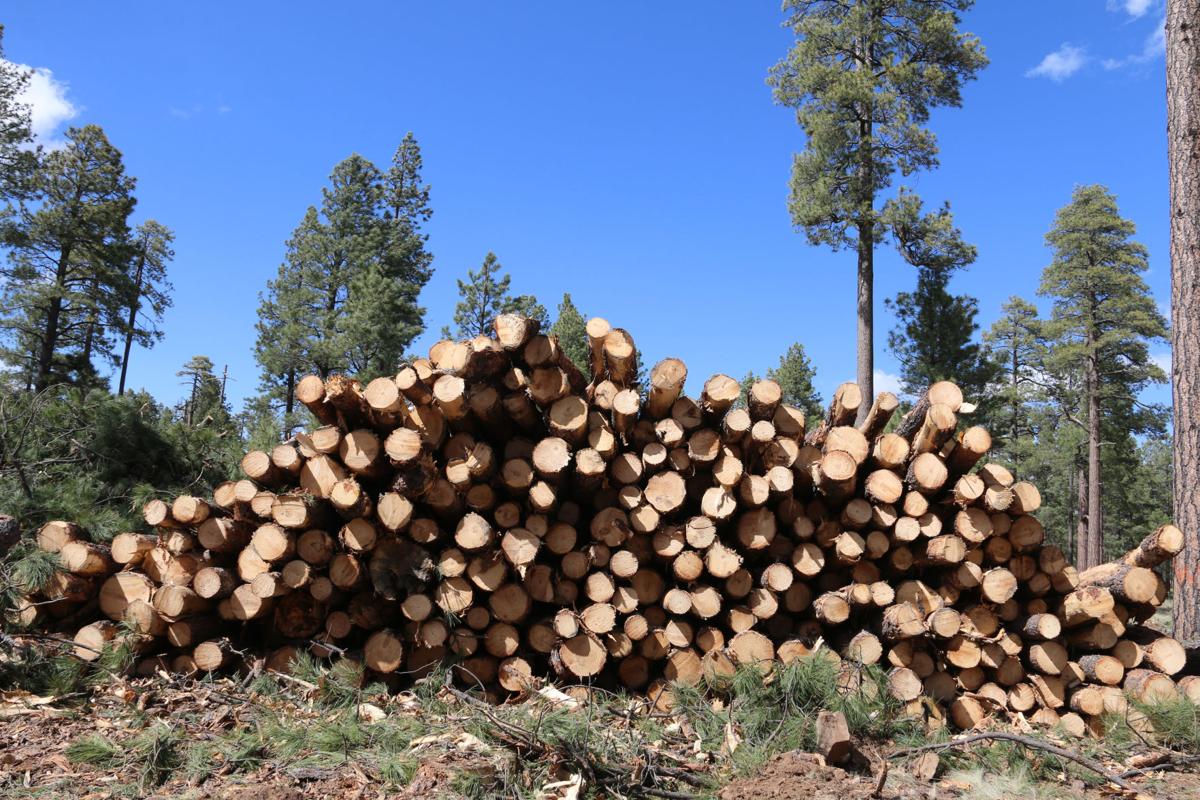 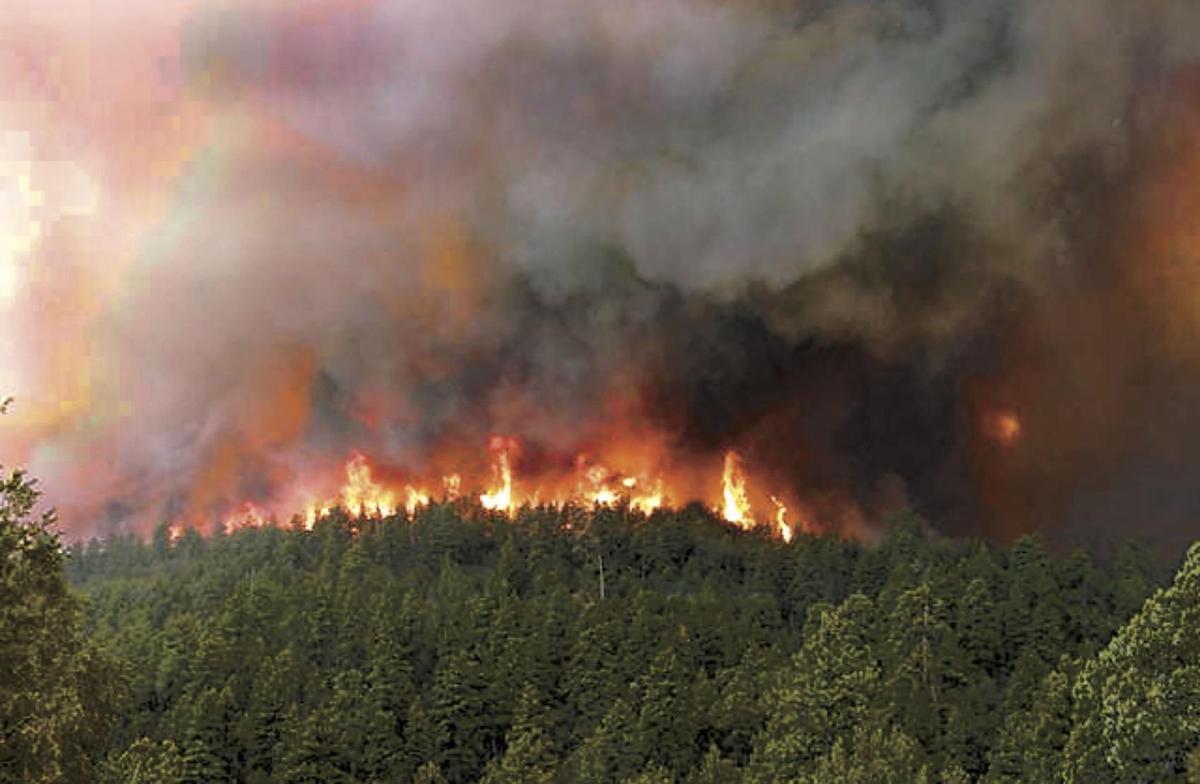 Forest restoration thinning developed in response to megafires like the Rodeo-Chediski. The pace of restoration so far has been too slow to provide much widespread protection from fire or development of thinning-related industries. 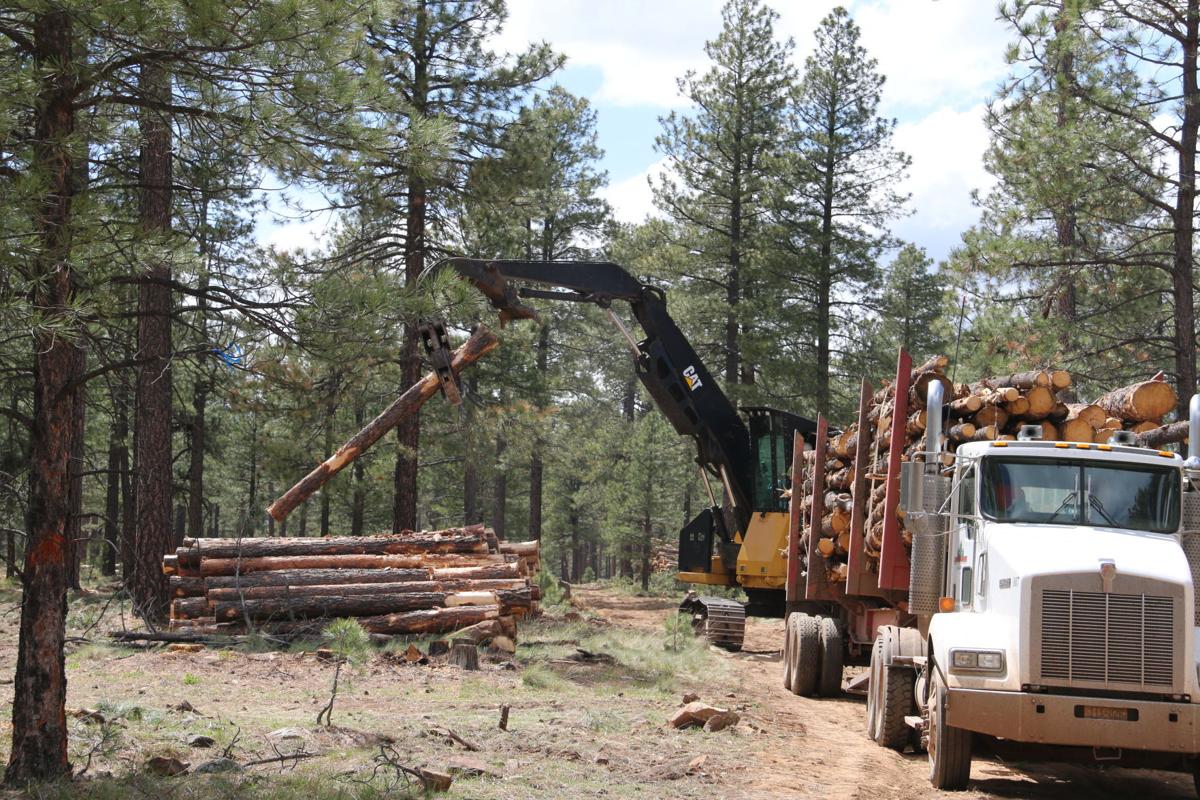 The Owens Brothers lumber mill in Payson where the Sawmill Theatres now stands was an economic mainstay, but relied on the giant, old-growth trees now scarce throughout the forest.

Forest restoration thinning developed in response to megafires like the Rodeo-Chediski. The pace of restoration so far has been too slow to provide much widespread protection from fire or development of thinning-related industries.

The logging business is booming.

But that don’t mean the rag-tag network of mills and loggers aren’t sweating bullets about staying in business.

Every month, a coalition of Forest Service, elected officials and logging industry types gather for the Natural Resources Working Group, in a brave, uphill effort to rebuild a nearly dismantled industry. Their success may determine whether forested communities like Payson and Show Low go the way of Paradise, Calif. — where 80 people died when a fire consumed the whole community.

The loggers reported happily this week that they kept working on thinning projects in the White Mountains and elsewhere right through the winter, when snow and rain usually shut down their operations.

And that’s great — since lumber prices are high despite the pandemic. The construction industry has escaped the worst impacts of the shutdowns and homeowners have undertaken a rush of home improvement projects.

“We’ve had great logging weather and all the mills are full,” said Tom Holl, who runs one local mill. “And we’re working with the city of Pinetop Lakeside doing 80 acres of thinning for a beetle infestation and mistletoe.”

Gerry Moore said the 140 employees at the sawmill operated by the White Mountain Apache Tribe have all gotten their COVID-19 vaccinations and the mill has been running at capacity right through the winter — making up for revenue lost during an earlier COVID-19-based shutdown.

“We know the forest needs moisture, but we’re thankful we’ve been able to log,” said Moore.

He noted that one current logging project on the reservation will provide wood for 130 new homes. “We’re just finishing up that one.”

In the meantime, the tribe’s working to secure additional federal support to upgrade equipment, including a $6 million grant for new equipment in the mills. “That’ll be a big one for the tribe if we can secure that grant. We’ve been enjoying really good lumber prices again.”

But then — he’s worried.

The bone-dry winter means an early start to the fire season. And that means the Forest Service could very well shut down the forest entirely in April, leaving mills to operate on the stacks of wood they’ve harvested to that point.

The meeting reflected the white-knuckle conditions confronting Arizona’s once thriving, now just-hanging-on timber industry. That industry’s now more important than ever, since rebuilding the capacity to process millions of acres of thickly overgrown forest doesn’t just provide jobs — it offers the only viable way to reduce the growing threat of catastrophic, town-destroying wildfires.

Recent studies suggest that more than 80% of the 6 million acres of ponderosa pine and mixed conifer forests in northern Arizona are currently vulnerable to crown fires, thanks to a century of fire suppression, grazing and big-tree logging. Across most of that area, tree densities have in the past century increased tenfold to perhaps 1,000 trees per acre. That has turned the fire-adapted ponderosa pine forest into a catastrophe waiting to happen.

The U.S. Forest Service some 10 years ago launched the visionary Four Forest Restoration Initiative (4FRI) to restore the region’s forests. But the lack of a market for biomass and the lack of an industry that could turn a profit on huge quantities of small trees has stalled the most ambitious forest restoration effort in the nation’s history.

4FRI head Jeremy Kreuger offered the industry group another frustrating update on the latest effort to award contracts to thin a million acres of forest in Rim Country and the White Mountains. The Forest Service planned to award contracts for the next stage of the massive thinning project a year ago, but has for months been engaged in technical discussions with potential bidders. The sticking point remains how to cope with things like the 50 tons of commercially useless biomass on the average acre. The contractors can turn a profit on the trees between about 8 and 18 inches in diameter, but not if they have to absorb the cost of getting rid of the saplings and wood scrap.

Kreuger said he had no real progress to report on the negotiations with the contractors, but hopes to award another round of contracts before the end of March.

“We’re having significant and robust discussions. We’re right in the middle of it. How long this goes on depends on how quickly we come to agreement,” said Kreuger — side stepping the urgent efforts to pin him down. “For someone like me with the gift of gab — it’s hard to not be able to talk about it” due to the confidentiality of the bidding process.

The 4FRI contractors find themselves in the midst of a chicken and egg dilemma. The economics of their projects depend critically on things like whether the Novopower biomass burning plant near Snowflake stay in business and whether companies like Campbell Global can build a plant to turn wood scraps into particle board. However, those businesses can’t attract investment and make needed upgrades unless they have a clear idea how much wood they’ll get at what price and on what schedule.

The meeting also provided an update on the 30,000-acre Black River Project, which could keep the thin-spread network of wood-processing plants in the White Mountains in business a while longer. However, Forest Service officials said they have to finish a thick stack of environmental assessments before they can begin to approve contracts to clear a huge area with so much downed wood and dying trees that it could spawn another megafire that would threaten White Mountain communities. The process has been slowed by legal wrangling over the Forest Service’s failure to monitor the condition of the Mexican spotted owl. A judge ordered the Forest Service to undertake systematic monitoring rather than relying mostly on guesstimates, which required an overhaul in the conditions of the Black River sale.

Apache-Sitgreaves Forest Supervisor Anthony Madrid said “I don’t have 100% clarity” on when the contracts can go forward. “Our hope is we’ll complete the biological assessment in the next month and put the draft decision out on the street. This is all crossing our fingers.”

All of that makes the interminable delay in awarding the contracts so difficult for the network of existing mills and wood processing plants — not to mention the loggers and truckers wondering whether the fitful Forest Service supply chain will once again seize up.

So the Natural Resources Working Group offers the struggling network of loggers a chance to get a clue as to future supply — as well as provide one another with operating tips and moral support. The existing mills aren’t so much competing as paddling along in the same lifeboat.

Now a dangerous looming fire season has added a layer of uncertainty to the mad juggling act that has kept the region’s network of mills and logging companies more or less alive for the past decade.

The dangerously dry winter allowed logging to continue through December and into January — but will likely usher in an early, frightening fire season. Forest closures could again shut down operations. Moreover, every year the newly intense megafires of the modern era char millions of additional acres throughout the West — often leaving areas too damaged to even offer decent salvage sales.

“The winter has been non-existent,” said Tommy Bolton, with Campbell Global, the leading contractor for previous phases of 4FRI — mostly in the Coconino Forest. “So instead of worrying about winter and mud — our worries have turned to being shut down for fire. I don’t know what we can do to continue to operate as late as possible. But the lumber markets are strong — so we’re happy about that.”

Adam Cooley, who operates several mills including one in Heber, said, “We’ve had the largest output in a long time — like forever. Prices are exceptional right now, so that’s helping out.”

I tried to ascertain from the article what the root causes truly are for the inability of the processing plants to attract capital. The author mentioned the lack of certainty in predicting the future volume and market price of the biomass, but every business that deals with natural resources has similar challenges, and those risks are managed. The root causes seem to be (1) "biological" (which I assume means environmental, e.g., the Spotted Owl), and (2) forest closures due to fire risks. For the first, it seems we are putting human beings at great risk because owls would be put at risk. Are the owls in the entire forest, or just in certain sections? And, can they be relocated? For the second, cannot the Forest Service close the forests to visitors but not to loggers? Isn't there a way for the logging companies to mitigate fire risks while they harvest the trees? Is the Forest Service dropping the ball in managing this whole process?

Rather than insist electrical rate payers, or logging interests eat the cost of dealing with the biomass that must be removed to reduce fire risks, why not have the home owners and businesses living in high fire risk areas best the cost of processing the biomass?

A increase in property tax could be used to find the additional expense of the biomass fed electrical plant, rather than passing the cost on to unaffected rate payers.

Raising taxes is just as harmful to families and to the economy in general as raising the cost of electricity.