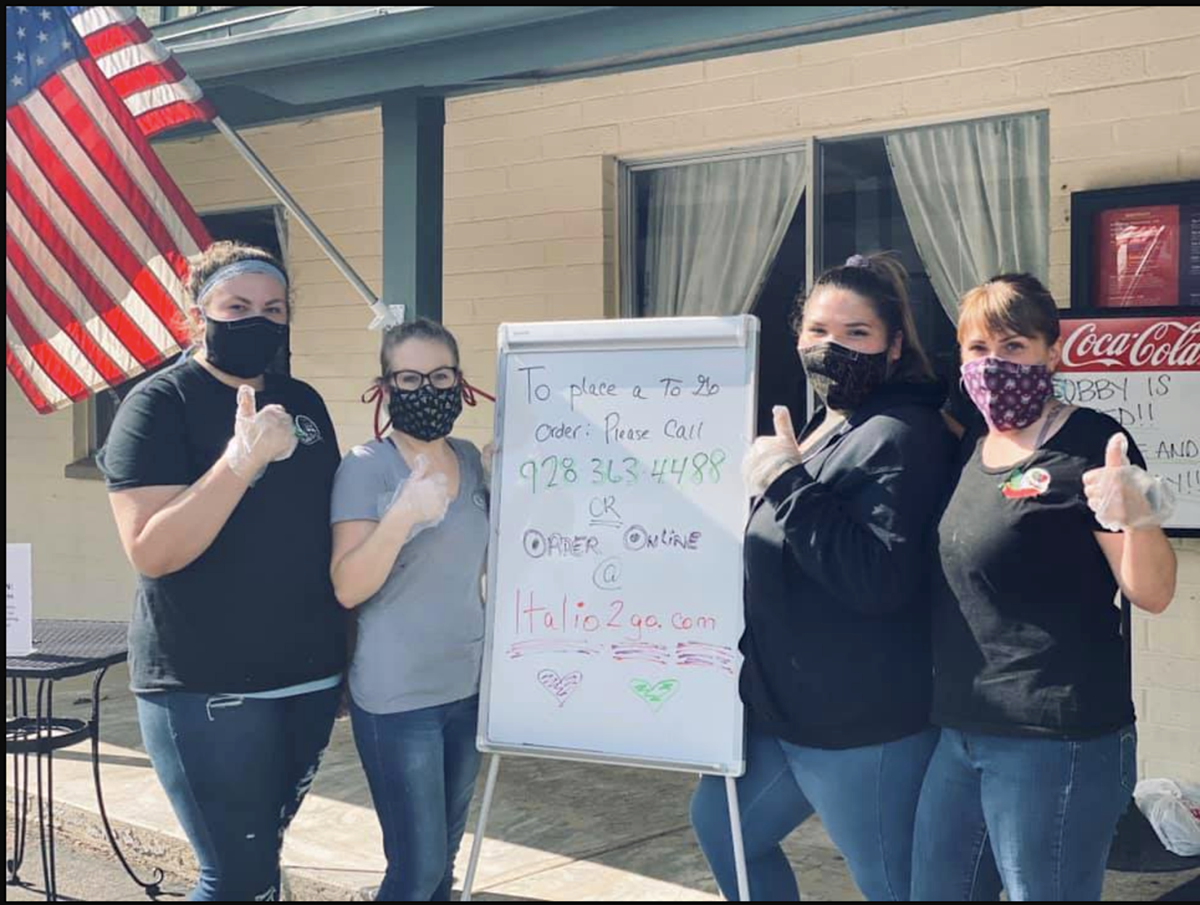 Jade Kaufman (far right) owner of Italio to Go and her loyal staff have already added masks to their work attire. Both South Korea and Germany have cautiously opened up their economies. Masks play a big role. 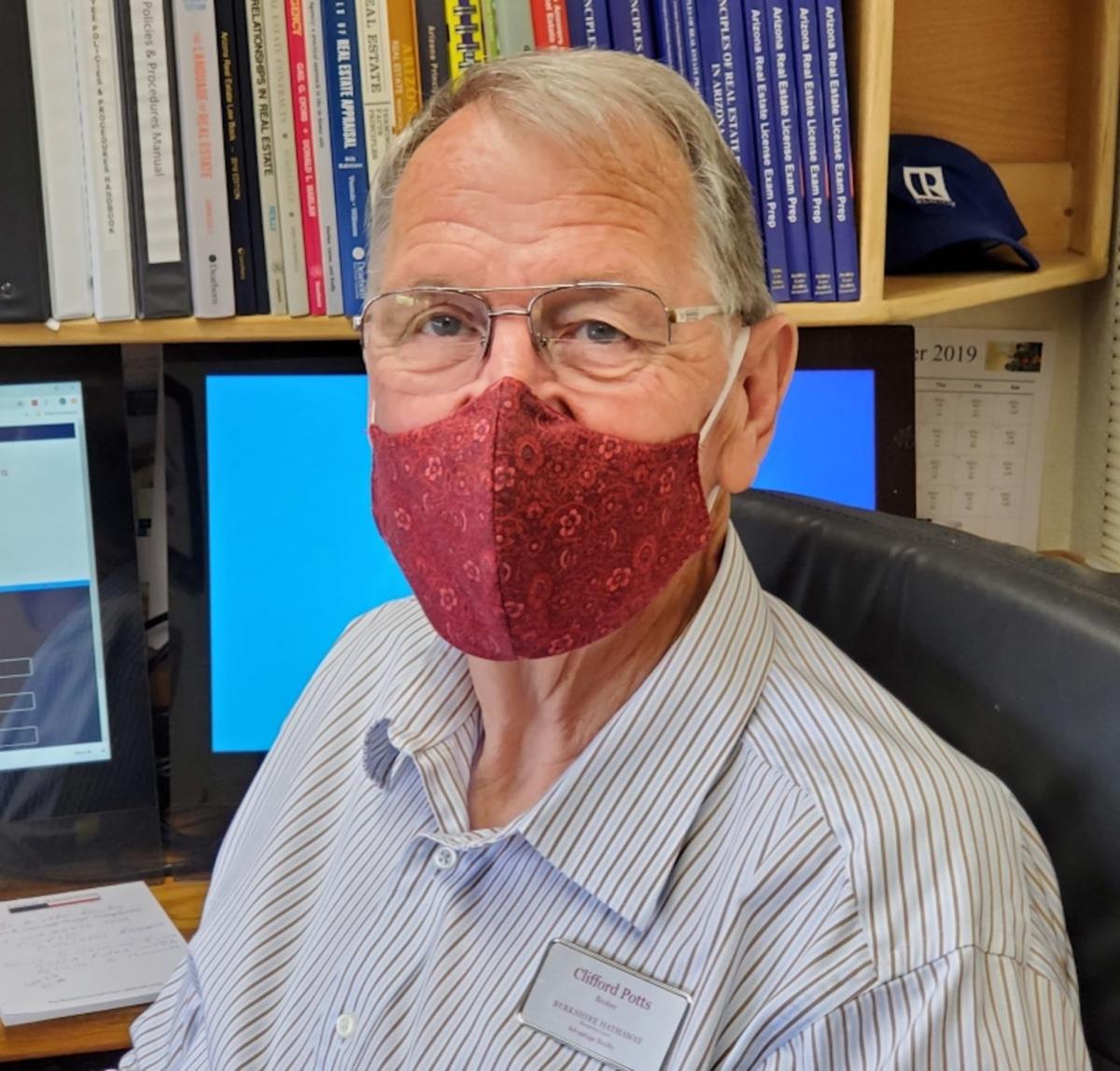 Cliff Potts of Berkshire Hathaway wears his mask while at his desk. Masks might become a critical part of the wardrobe for months.

Jade Kaufman (far right) owner of Italio to Go and her loyal staff have already added masks to their work attire. Both South Korea and Germany have cautiously opened up their economies. Masks play a big role.

Cliff Potts of Berkshire Hathaway wears his mask while at his desk. Masks might become a critical part of the wardrobe for months.

As businesses and idled workers wait for rescue, economists are hoping for a pandemic recovery almost as rapid as the unprecedented crash.

One recent study by Arizona State University economists offered a blast of bad news — followed by a frayed rope of hope. They predicted the Arizona Gross Domestic Product will plunge 20 to 40% in the second quarter, with unemployment rising to 15%.

However, they also foresee a three- to nine-month recovery, with unemployment dropping back down to 5.5% in 2021.

That’s long term. In the short term, many businesses still don’t have promised emergency loans and many workers still aren’t getting unemployment benefits — especially the self employed and gig workers promised help in the federal CARES Act stimulus package.

Now the state has hired an outside firm to process benefits for those self-employed workers, offering the hope of starting to pay benefits in the next few weeks.

The promise of jobless benefits offered hope for many small business owners and their workers. Rim Country’s tourism and service-industry economy relies heavily on part-time and self-employed workers. The federal program boosted the state’s $240 maximum weekly unemployment benefit by $600. Self-employed and part-time workers normally can’t get unemployment, but they can qualify for the $600 per week supplemental benefit.

The flood of applications overwhelmed the state Department of Economic Services, resulting in delays in processing applications. The system couldn’t process the claims of the part-time and self-employed workers at all. Now the state has hired an outside contract — Geographic Solutions — to handle the claims of the self-employed, which hopes to send out checks in the next several weeks. The benefits will be paid retroactive to the initial filing.

Total jobless claims in the past two months has risen to 514,000 — 7% of the state’s population, which suggests an unemployed rate of 10 or even 15%. Currently, some 300,000 people are receiving continuing claims, with the rest lined up to qualify.

Many of the 230,000 who have applied but not received a payment are likely self-employed workers who normally wouldn’t qualify for benefits. The state is now paying out $151 million weekly in unemployment benefits, much of it channeled from the federal government.

The numbers will probably get worse with each passing week. Nationally, 30 million have filed for unemployment since the pandemic came ashore. The jobless rate is now well above the Great Recession and closing in on the Great Depression — wiping out a full decade of job growth.

Despite the dire jobless figures, many local businesses are weathering the storm — even prospering. That includes grocery stores and hardware stores. Home Depot has seen business boom, with a line out the door as employees try to limit the number of people in the store at one time.

Apparently, many residents are spending their stimulus checks on home improvements while they’re stuck at home.

Crowds of visitors also continue to arrive every weekend, despite the stay-at-home orders and the forest service closure of many of the most popular sites for visitors.

The federal CARES Act paycheck protection program has also offered mostly so-far-deferred hope for small businesses, according to economic development officials. Businesses can borrow enough money to cover two-and-a-half months of payroll — and won’t have to pay it back so long as they spend 75% of the money on payroll and either don’t lay anyone off or quickly rehire them. But many business owners have already laid off workers and either haven’t received the payroll loan or are afraid to spend it for fear they must pay it all back before business recovers.

That’s where the forecast by the ASU economists offers some hope. ASU economics professors Dennis Hoffman and Lee McPheters predicted a “V-shaped” recovery at the annual forecasting webinar hosted by the W.P. Carey School of Business and the Economic Club of Phoenix. The prediction is based on the assumption that a fresh wave of infections and deaths don’t force a second shutdown.

The economists said the recession that started in mid-March will last three to nine months.

So far, Arizona has suffered less from the pandemic than many states — although cases have resumed a steeper rise in the last two weeks. The economists say unemployment amounts to about 9-14% of the labor force, but only 13 states had lower unemployment rates. The economists predicted unemployment will drop back down to 5.5% in 2021. Population growth hit 1.7% last year, but they predict an increase of just 1% this year. By 2021, they predicted a rise to 1.4%.

The effects of some $3 trillion in federal stimulus spending have yet to kick in. The federal government is spending about four times what it put out to cushion the Great Recession a decade ago.