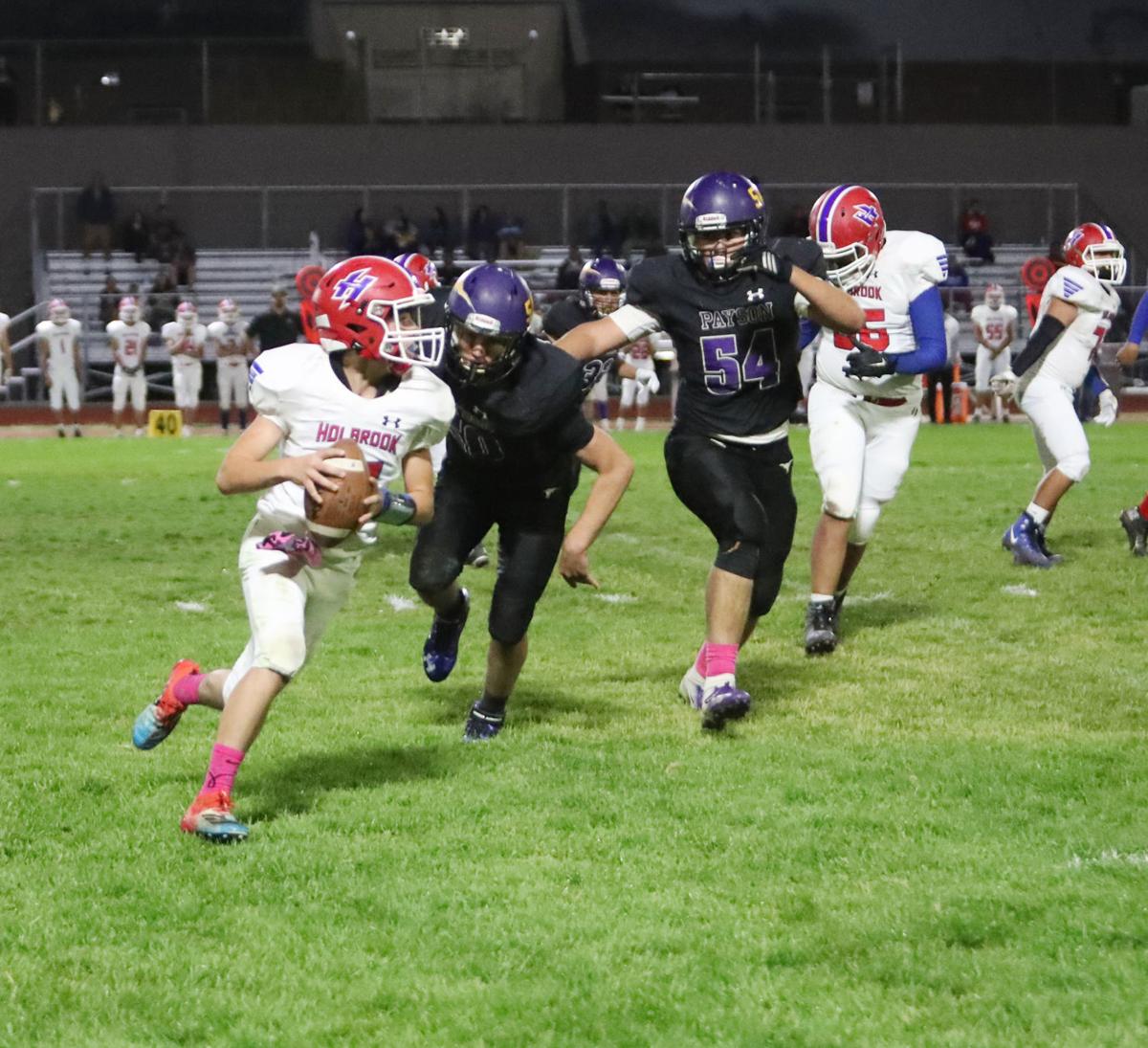 In the photo above by the Roundup’s Keith Morris, Connor Faust (54) chases Holbrook’s quarterback last season. The junior earned First Team All-3A East honors as a defensive tackle in voting by coaches. In the contributed photo at left, Faust made these homemade weights to keep working out at home during the COVID-19 school/gym closures. 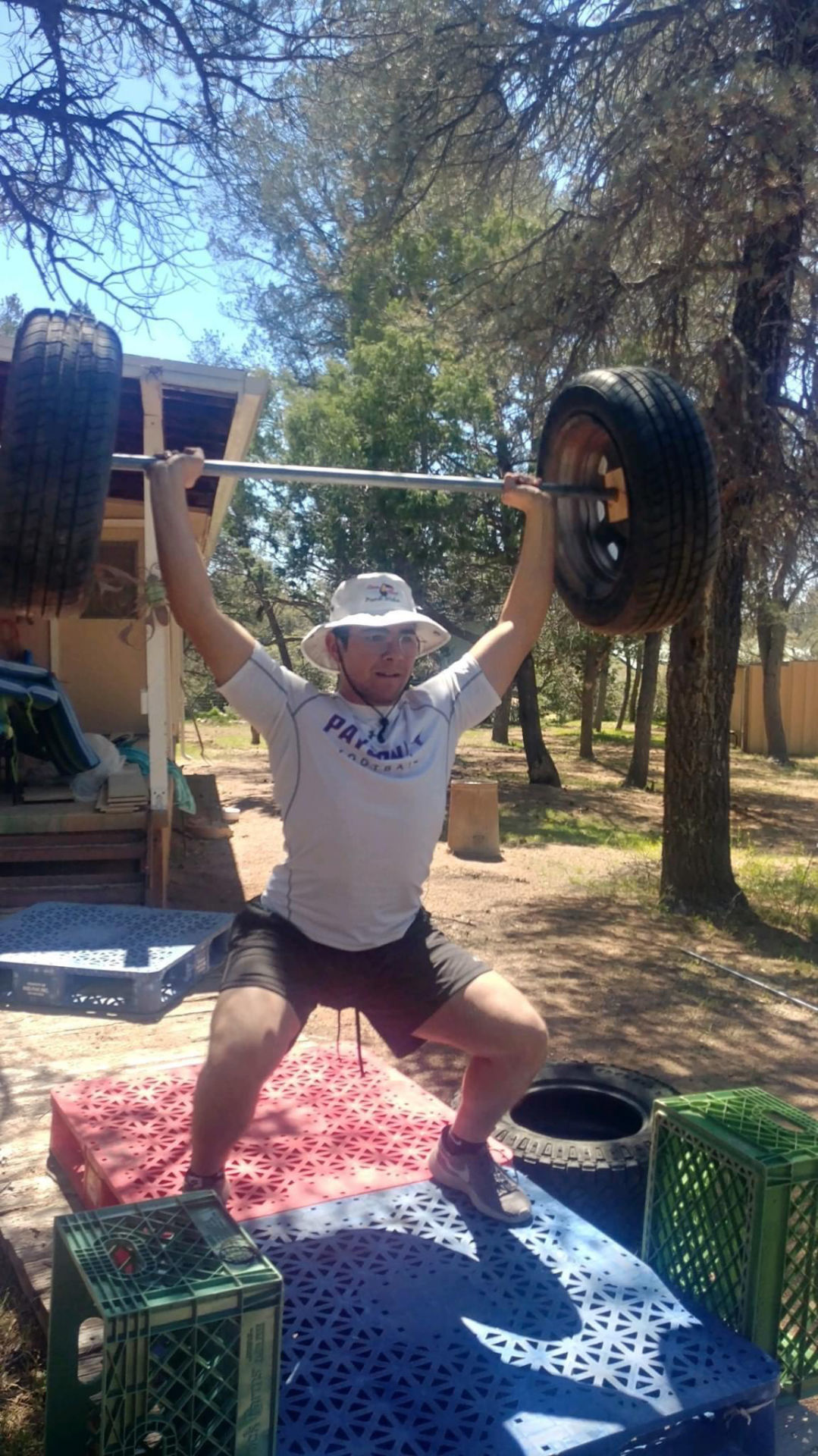 Connor Faust made these homemade weights to keep working out at home during the COVID-19 school/gym closures.

In the photo above by the Roundup’s Keith Morris, Connor Faust (54) chases Holbrook’s quarterback last season. The junior earned First Team All-3A East honors as a defensive tackle in voting by coaches. In the contributed photo at left, Faust made these homemade weights to keep working out at home during the COVID-19 school/gym closures.

Connor Faust made these homemade weights to keep working out at home during the COVID-19 school/gym closures.

Connor Faust didn’t want to stop working out just because Payson High School and area gyms had closed because of COVID-19.

But Faust, who’ll be a senior on the football team this coming school year, doesn’t have a set of weights at home. So he tried to figure out another way to maintain and build his strength.

“I saw different ideas to do things on Instagram,” Faust said. “I didn’t want to use this as an excuse to do nothing.”

Well, he’s got some weights now.

“I just went around my property and found some old tires and a pole.

“I have a set of dumbbells but there’s only so much you can do with those. I think each tire is about 60 pounds and the bar is like 15, so it’s about 135 pounds. I spend about two hours doing various workouts to keep myself in shape.”

He knows he and his teammates must stay in shape if they want to do something special this coming season and build on a memorable 2019 campaign that saw them go 8-3, win the 3A East Region and reach the playoffs.

Faust started at defensive tackle and right tackle on the offensive line. Coaches voted him First Team All-3A East Region for his play on the defensive line.

He had been going to the gym almost every day before it shut down because of the virus.

He’s also made another piece of equipment using a chain and a cinder block.

Payson head football coach Bryan Burke loves that kids are adapting to circumstances to continue working to prepare for the upcoming season.

“With all the gyms shut down, our Longhorns are still finding a way to train,” Burke said. “Connor came up with homemade barbells so that he could keep training during the quarantine. Way to go Connor.

“And Jimmy Johnson sent me a video of his (homemade) weights.

“I have been calling and checking in with players the last two weeks and I have heard of some pretty creative ways of getting some work in. The quarantine isn’t stopping them for working towards a region title.”

“I made a workout with stuff you find around the house and a lot of kids have been doing that,” Burke said.

Some kids have access to a bench press, and they’re keeping up with the workouts. Others have to kind of come up with a way to be creative.

He said they just have to be willing to put in the time.

“That’s been the message: I can’t hold your hand and walk you through it,” Burke said. “I don’t know if they have a 50-pound bag of dog food at their house, or what they have, so it will be on them. They don’t have coaches looking over their shoulder to be sure they do it.”

The coach believes If they stay dedicated they’ll reap the rewards this fall if there is a football season.

Faust said he’s talked to teammates and says many are keeping disciplined.

“I know a lot of players are doing it,” he said. “Trevor Cline has a bench set at home and others do, too. And a lot run everyday just trying to get ready for the season like I am.

“Once this thing ends we’ve got to hit it from the get go. I’m keeping my hopes up that we will have a season and we need to put in the work to be successful in August and September.”