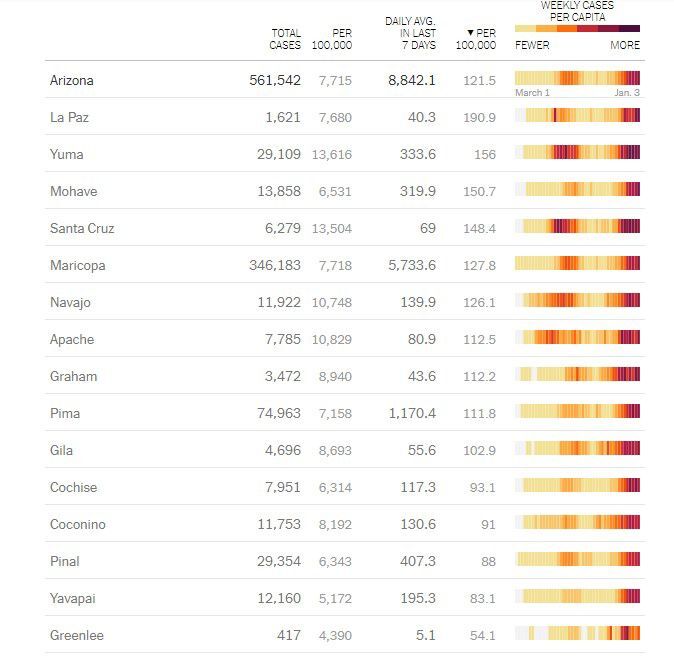 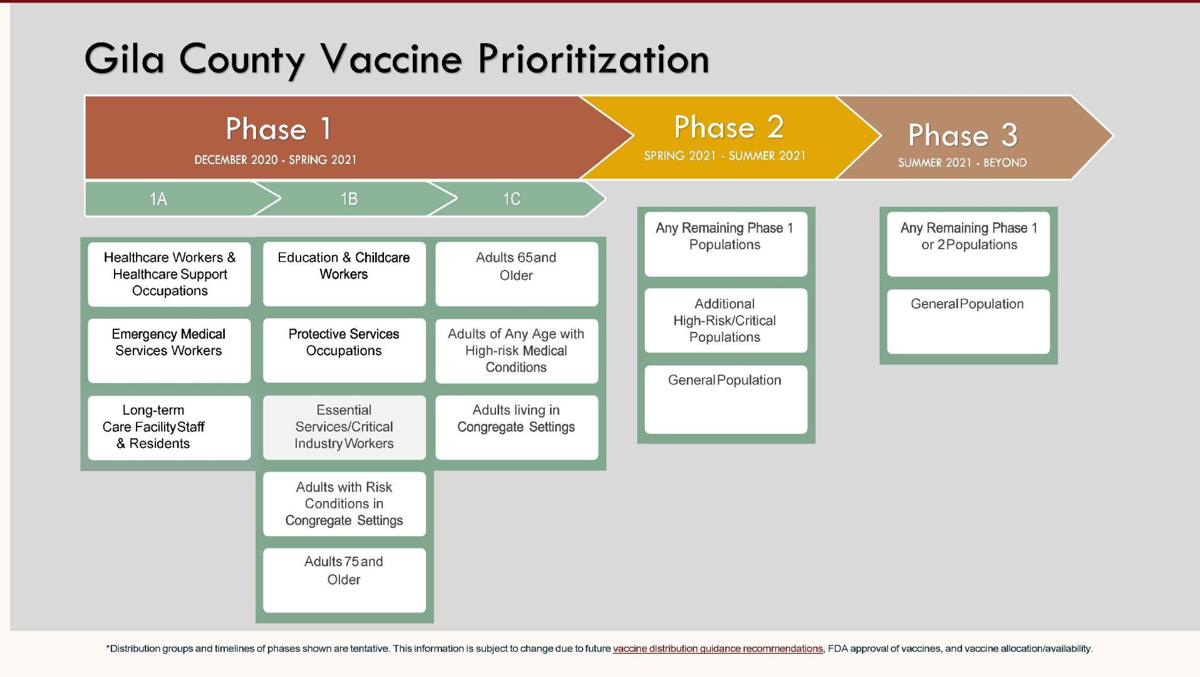 The debate about when schools should return to in-person classes has intensified, even as Arizona claims the crushing title as the nation’s COVID hot spot and teachers line up for vaccinations.

The Payson School Board has already decided to remain in distance learning mode until at least Jan. 19, due the widespread presence of the virus in the community.

Arizona this week claimed the fastest rate of spread in the nation, with a 38% increase over the past two weeks. Deaths have also risen 3% and hospitalizations by 17%. Arizona now has more than 561,500 reported cases and 9,064 deaths.

Every county in the state is now in the “red zone” on the state school opening benchmarks, based on the number of new cases, the percentage of positive tests and hospital visits.

The bad news for schools comes with a dash of good news – as teachers this week began getting the first of two doses of the Moderna vaccine to protect them from COVID-19. The first shot confers 50 to 60% protection from the virus. A second shot generally administered three weeks later confers 95% immunity, with few side effects.

Unfortunately, Arizona has one of the slowest vaccine rollout programs in the nation, according to national databases – and vaccinations started a week later in rural counties than in Maricopa County.

Arizona Superintendent of Schools has urged Gov. Doug Ducey to issue a fresh executive order directing schools to remain in distance learning status until the rate of community spread drops to safer levels.

“Given the severity of our state’s situation and the virus’s trajectory after the holiday period, Gov. Doug Ducey should order schools to remain in distance learning for a limited two-week period,’’ Kathy Hoffman said. And she told Capitol Media Services that opening schools immediately after the Christmas holidays given the level of infection is “reckless.’’

A spokesperson for the governor said Ducey will not consider such an order, but will leave the decision on whether to return to in-person learning up to school boards, based on conditions in their community.

“This is a local decision, the online option is already available, and the governor has repeatedly made his preference clear: Kids have already lost out on a lot of learning and he wants schools opened safely,” spokesperson C.J. Karamargin said in a text message to the Arizona Republic.

Payson schools have essentially already decided to remain in distance learning mode for the first two weeks after the holiday break.

Arizona cases have soared since the school board decided the week before the holiday break started. On Jan. 2, Arizona reported 17,222 cases, bringing the average to 8,895 new cases daily for the past week. That dwarfs the previous highest average of 7,700 in mid-December and is nearly three times the peak in early summer.

Statewide, deaths are peaking at about 90 per day and hospitalized patients have hit an all-time high at 4,500.

Gila County as a whole is well into the red zone, with seven times the infection rate for even hybrid classes designed to minimize the number of kids who mingle on any given day. The positive test rate is about three times the level recommended for in-person classes and the hospitalization rate is nearly five times the level recommended for in-person classes. Even those numbers are based on data that’s about two weeks old, with cases having risen 38% since then on a daily average basis.

Studies have shown that when community transmission rates are low, schools don’t create clusters of new cases – especially elementary schools. However, when the virus is widespread in the community – new clusters of cases can spread on campus when students gather for in-person classes.

Statewide, about 60% of the ICU beds are now occupied by COVID patients, with about 93% of the state’s ICU and regular hospital beds now in use.

Hoffman said the state should step in and require schools to remain closed for the next two weeks.

“Our teachers who are being asked to go teach in person despite the very high risk and high spread of COVID in the community are very fearful because they’re worried because if they get sick are they going to be able to get care in a medical facility,’’ Hoffman said.

Payson schools struggled to keep campuses open even before the latest surge in cases statewide. Even a couple of cases on campus required so many teachers to quarantine themselves that the high school and the middle school both had to shut down for lack of teachers. The state’s already suffering a statewide teacher shortage, partly because of the pandemic but mostly because Arizona has the largest class sizes and among the lowest teacher salaries in the country.

Fortunately, teachers in Arizona qualify as “essential, front-line workers.” This means they can get a vaccine right after frontline medical workers and nursing home residents and staff get their shots.

So teachers began lining up this week. They’re in the 1-B category, which also includes childcare workers, public safety personnel and people older than 75 plus essential industry services and adults with high-risk conditions living in group settings.

Despite the unexpectedly slow rollout of the first two approved vaccines, county health workers say they have enough doses for the 1A and 1B categories to get their first shot in the next few weeks.

It’s unclear when the county will receive enough doses for the next group, designated 1C. Those categories include adults older than 65, adults with high-risk conditions like diabetes, and adults living in group settings.

The Phase 2 group includes the balance of the general population, but they may not get a chance for a shot until sometime after March.

Health officials have been debating whether to provide more initial doses, even if it delays the second shot by weeks. Great Britain has already given the first dose as quickly as possible hoping to slow the spread of a new strain of the virus that scientists believe is twice as infectious as the current, dominant strain. The strain of the more easily spread virus has already shown up in California and Colorado as well.