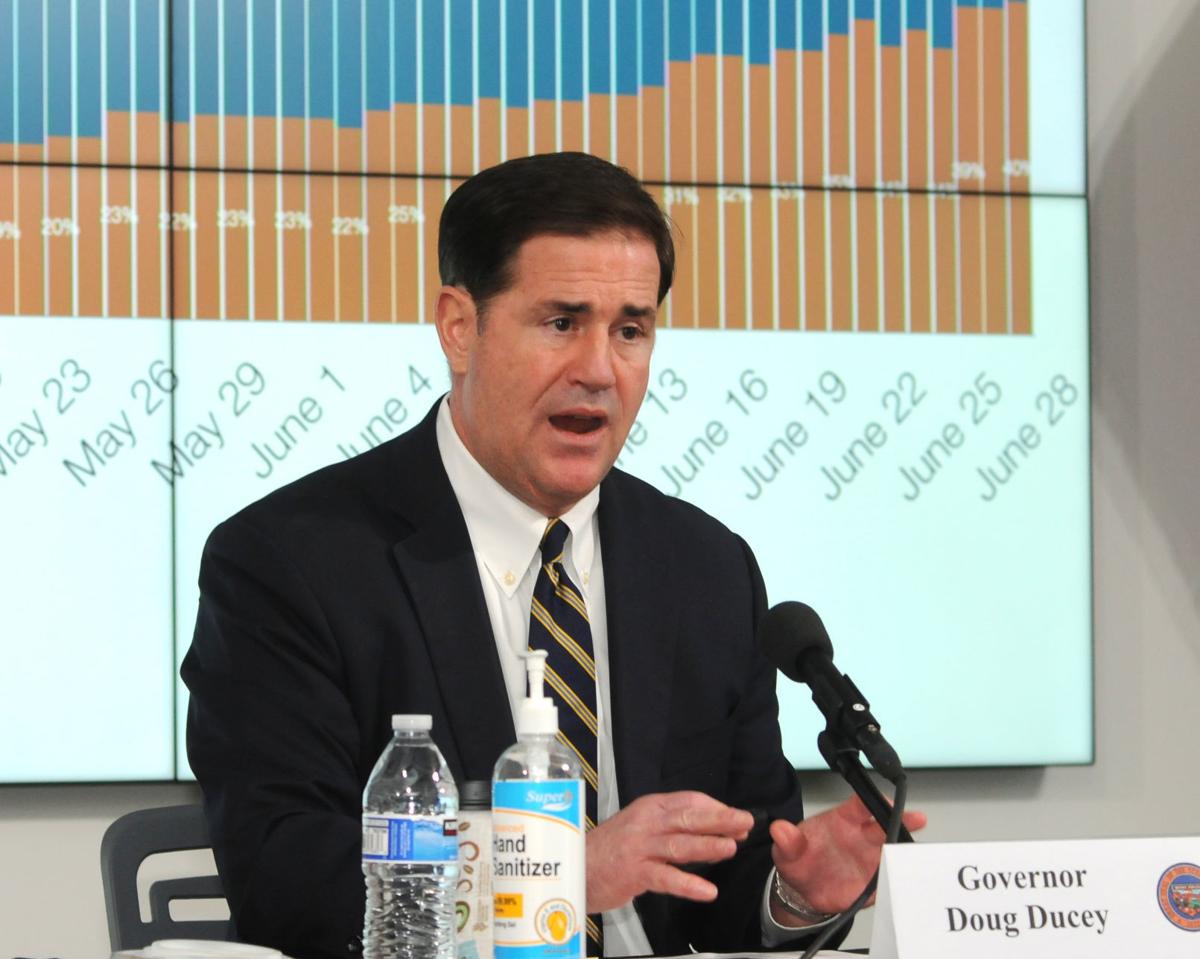 Gov. Doug Ducey explains his decision Monday to once again close bars and restrict other activities amid a spike in COVID-19 infections. 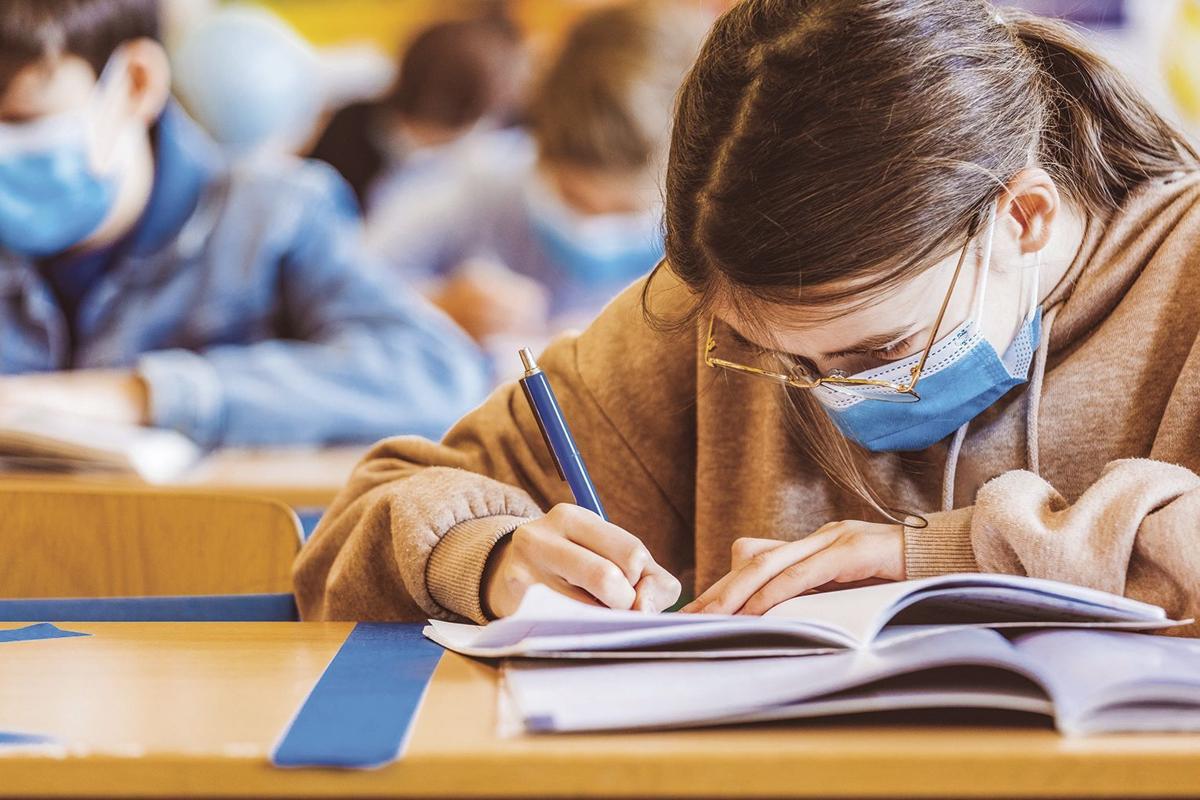 Gov. Doug Ducey explains his decision Monday to once again close bars and restrict other activities amid a spike in COVID-19 infections.

Gov. Doug Ducey this week pushed back any in-person school reopenings until Aug. 17, giving school officials another two weeks to prepare for their plunge into the unknown.

The order came as confirmed cases of COVID-19 exploded and the state reimposed an order to close non-essential businesses, lifted on May 15.

Research has also shown that the abrupt shift to online learning last semester cost many students half a year of academic progress, with the worst effects on minority and low-income students. That includes many rural areas like Rim Country and the White Mountains, where half of the families qualify as low-income.

An earlier executive order gave school districts broad flexibility in reopening. Districts could return to near-normal, in-person learning, continue mostly online learning or embrace a blend of in-person and online approaches. Districts would still have to offer a place for students to study in the event of a blended approach. However, the order would insulate schools financially from a big drop in enrollment if parents kept their children home. It also eased standards for the time students had to spend in class to get state funding.

The latest order spawned new uncertainty just as school districts were scrambling to lay plans for an Aug. 3 reopening, while grappling with the suddenly overwhelming list of scheduling options.

The Payson Unified School District Superintendent Linda Gibson sent out a letter to parents saying “while establishing reasonable and responsible plans for returning to school, we continue to have to change direction weekly with executive orders and state, as well as federal, guidelines.”

For starters, the district once again canceled use of school facilities for extracurricular activities, mostly preseason training for sports teams.

“Your patience and understanding are more appreciated than ever,” wrote Gibson.

Arizona Superintendent of Public Instruction Kathy Hoffman this week told the Arizona Republic “we were hopeful that schools could reopen and that with mitigation strategies that our schools could still offer in-person instruction. But more recently, it’s become more clear that’s not advised. We’re going to see a lot more online learning than we saw before,” she said.

The decision comes as confirmed cases of COVID-19 have risen from about 500 per day when the stay-at-home order expired on May 15 to about 3,900 per day in the past week. The rate of infection has increased eightfold among younger people, but only doubled among high-risk groups like those over 65. Only 11% of the confirmed cases have been among those under 20.

Even before the most recent surge, studies suggested 18% or 20% of parents have doubts about sending their children back into in-person classes. Many parents support a return to in-person classes, especially those struggling to provide online learning tools at home or facing big problems providing care for children at home due to their own work demands.

Interestingly, recent studies suggest COVID-19 doesn’t pose a grave risk to children. Some doctors have documented a strange, potentially dangerous inflammatory response in children who have been infected, but the condition remains rare.

One international study found children are only half as likely to get infected when exposed to the virus as adults, according to the results published in Nature. Moreover, once infected, only 21% of children show any symptoms at all. By contrast, 70% of people over 70 develop symptoms.

Much of the initial alarm about the impact of COVID-19 on children was based on the experience with the flu — a different respiratory virus. The flu hits the very young and the very old the hardest and spreads readily in school settings. However, COVID-19 has shown a very different pattern, with the odds of infection and the development of serious symptoms increasing with age.

The researchers concluded, “In countries with younger population structures — such as many low-income countries — the expected per capita incidence of clinical cases would be lower than in countries with older population structures, although it is likely that co-morbidities in low-income countries will also influence disease severity. Without effective control measures, regions with relatively older populations could see disproportionately more cases of COVID-19, particularly in the later stages of an unmitigated epidemic.”

That’s bad news for rural counties in Arizona with generally older populations than urban counties like Maricopa. It also means that even if children don’t face a high risk of serious complications, they could end up with a “silent” infection they pass along to parents. That’s especially alarming in places like Payson, where many grandparents are caring for their grandchildren.

The researchers said something in the immune systems of children apparently lowers their risk of first getting infected and then developing serious symptoms.

The researchers in the Nature paper noted, “Understanding the role of age in transmission and disease severity is critical for determining the likely impact of social-distancing interventions on SARS-CoV-2 transmission, especially those aimed at schools, and for estimating the expected global disease burden.”

Other research has provided mixed results. Most studies have shown few infections and little serious illness among children. Some have shown children can get infected as easily as adults and spread the virus, even if they have few or no symptoms.

The enormous disparity suggests the greatest health risk in going back to school involves children with risk factors like diabetes and children likely to take the infection home to parents with risk factors or family members older than 55.

Some researchers have suggested this opens the door to a more nuanced approach in reopening schools. Mask wearing, temperature checks, spreading out children in classrooms, limiting the mixing of children during the school day and enhanced cleaning efforts could slow the spread of the virus on campus. In the meantime, improved distance learning for children with risk factors and family members at home with risk factors could limit the consequences of infections that take place.

The latest governor’s order gives hard-pressed districts another two weeks to hash out a response.

Arizona percentage of infections and death by age