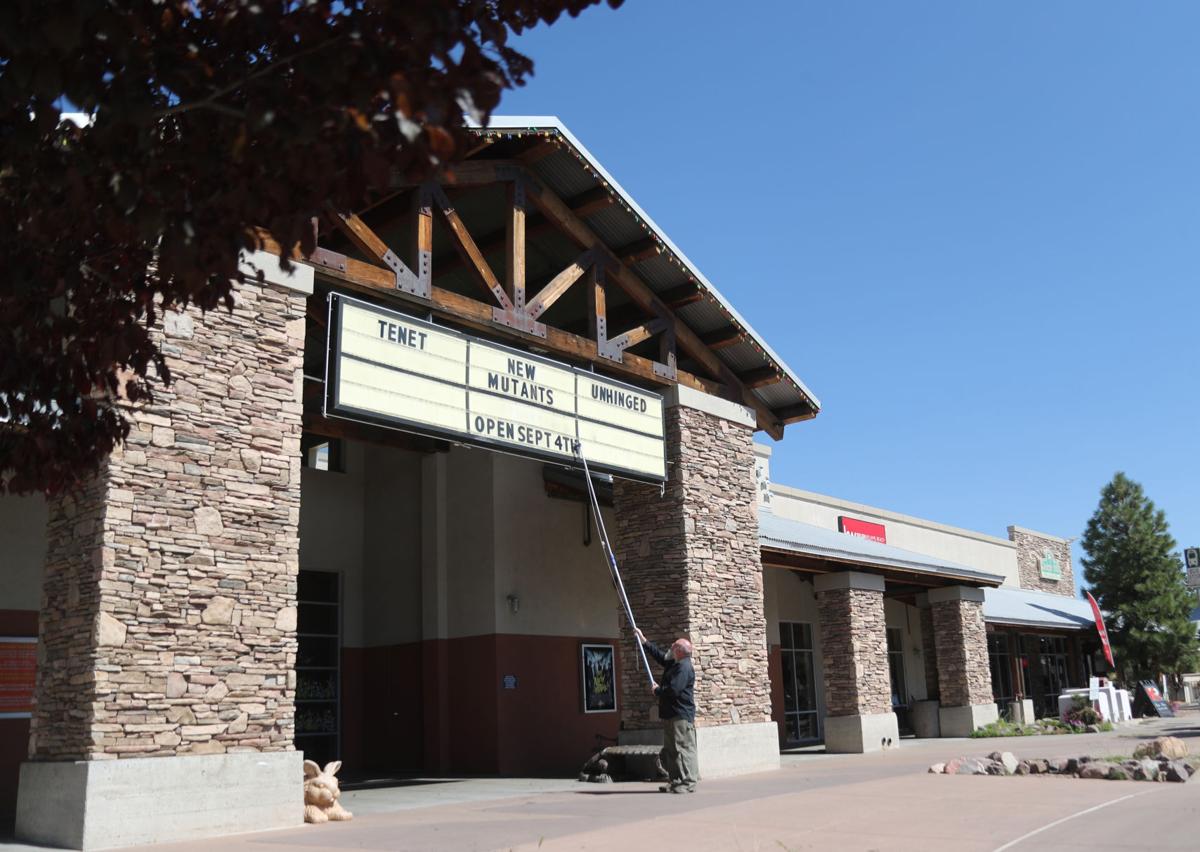 General Manager Craig Triphahn readies the Sawmill Theatres for its reopening Friday, Sept. 4. The movie house has been closed for more than two months because of the COVID-19 pandemic. 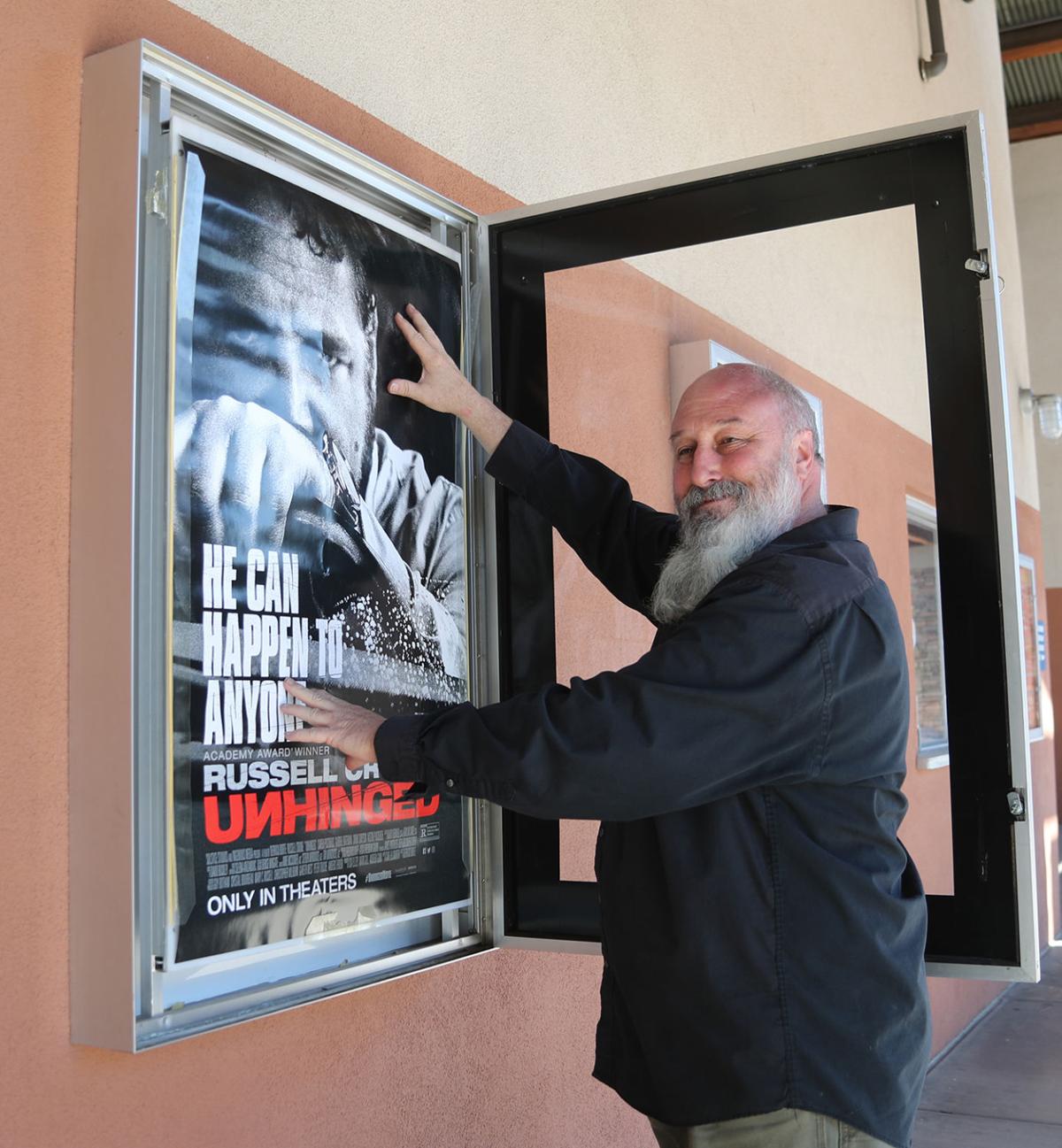 General Manager Craig Triphahn readies the Sawmill Theatres for its reopening Friday, Sept. 4. The movie house has been closed for more than two months because of the COVID-19 pandemic.

Craig Triphahn tried to think of a way to generate revenue after the lights went out at Sawmill Theatres.

He sold bags of popcorn outside in front of the theater for a couple of hours on Fridays for families to eat at home over the weekend.

“The first time I did it, it was pretty good,” said the theater’s general manager. “But the second time we didn’t have as many show up.”

It was the only option he had to make any money after state and local restrictions aimed at limiting the spread of the COVID-19 virus shuttered Payson’s only movie house along with theaters across the country for months.

But Triphahn need not take popcorn sales outside after the Arizona Department of Health Services this week approved the reopening of the theater.

Sawmill Theatres reopens for the first time in more than two months today. The theater has been closed for most of the last four months, briefly reopening at the end of May before new restrictions shut the doors again.

Twice he went before the ADHS with proposals that were rejected. But they approved his third proposal this week.

Tickets are $5 for all showings until further notice.

They’ll block off every other row and only sell 25% of the seats. Staff and customers must wear face coverings except when actively eating or drinking. Anyone wanting to sit in specified seats can do so by calling Triphahn at 928-595-0876 or emailing him at triphahn@hotmail.com.

“We don’t have automated ticket sales, but I’m happy to assist anyone wishing to sit in a particular seat or area,” he said. “We want people to be safe and comfortable.”

Triphahn said you don’t have to pick out a certain seat or seats when you buy your ticket, but it’s an option he can arrange for those who wish.

A reserved seating option was the key to reopening and something he came up with after they rejected previous proposals.

“I put in three appeals,” he said. “The first one was to reopen at 33% capacity and that was rejected. Then I went to 25% and they still said ‘No.’ So, then I proposed 25% and reserved seating and they said ‘yes.’ You have to prove you’ve gone above and beyond their requirements.”

Enhanced sanitizing will be utilized, with hand sanitizing stations throughout the theater. Social or physical distancing in the ticket and concession lines are also required.

They’ve staggered the start times of movies as an additional way to minimize the number of people at the box office, concession stand and lobby.

One movie will start at the top of the hour, the next 15 minutes later and the third at the bottom of the hour. The three movies will show on one side of the complex, then shift to the other side of the complex for the middle show, then back to the first side for the night showing. So each theater will sit empty for extended periods.

“Theaters will be vacant for three or four hours between showings,” Triphahn said.

“New Mutants” pulled in about $7 million at the box office last weekend as it debuted in 62% of U.S. theaters that were open, according to Disney. Sawmill wasn’t one of them.

“You can’t be taking hits like this too much, but I’d like to think this is a onetime disaster,” he said. “I think a small theater like the Sawmill will be fine, but it might be kind of a challenge for some of these mega theater (chains)... We lost our whole summer, which is our busiest time. This has been challenging.”

Triphahn said some may be apprehensive about returning to the theater, but “It’s very safe. We’re going above and beyond what the state is requiring.”

There’s a portion of the public that can’t wait to get back into the theater and watch movies on the silver screen once more.

“I think there’s always going to be that audience for movies on the big screen,” Triphahn said. “You’ve got people who are fans of the theater; it’s an event for them. There are some big movies that have to be seen on the big screen.”

The much-anticipated Christopher Nolan sci-fi thriller “Tenet” qualifies as a summer blockbuster made for the big screen. It was scheduled to be released July 17 but was pushed back to July 31 then Aug. 12 because of COVID-19 and the resulting theater closures. It finally makes its nationwide debut this weekend and should serve as a gauge for the public’s appetite for returning to the theater. The movie exceeded expectations by raking in about $53 million last weekend when it debuted overseas and in Canada, offering hope to the industry that movie theaters might survive the pandemic.

But it’s been a rough few months.

“You start to lose your staff,” Triphahn said. “After a time, they look for jobs elsewhere.”

The theater employed Triphahn and 14 others before the first shutdown. He said he is one of just seven who’ll return this weekend. But he will not replace the others just yet since reducing maximum ticket sales by 75% and cutting the number of screens in use in half reduces the need for a full staff for now.

He thinks better days are coming.

Triphahn hopes things get back closer to normal by Thanksgiving since that typically kicks off another busy time for theaters.

“September and October are kind of slow months for us,” he said. “Hopefully, we’ll get through the next two months and fully reopen by Thanksgiving. Once we starting opening up again, yeah, hopefully, I’ll be hiring for the holidays,” he said.

Theaters survive on concession sales. The steady stream of customers buying popcorn, candy and soft drinks will go a long way towards helping the Sawmill dig out of the financial hole it’s fallen into. They’ll continue offering popcorn to go.

“As long as we’re open anyone can come in and get a big back of popcorn for $10,” Triphahn said.

Fortunately, that will no longer be all Sawmill Theatres can offer as the house lights go down and cinema magic shines bright on the big screen once more.