Bats have vigorous immune systems, which may account for why viruses that originated in bats do so much harm when they infect humans. These Mexican free-tailed bats are emerging from Carlsbad Caverns. Bat numbers have plummeted for a host of reasons, many linked to human use of pesticides and destruction of winter roosting sites. 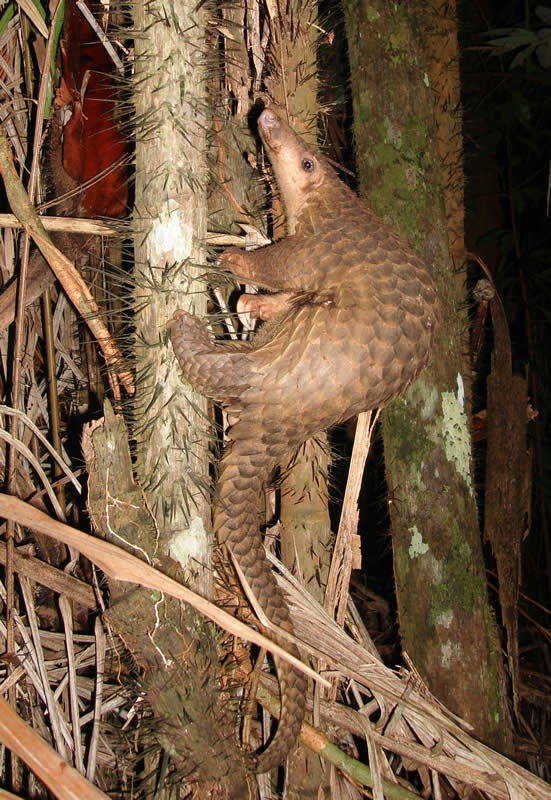 The COVID-19 virus likely originated in bats, but may have also infected pangolins — an Asian anteater. Both bats and pangolins are sold illegally in Chinese wildlife markets. 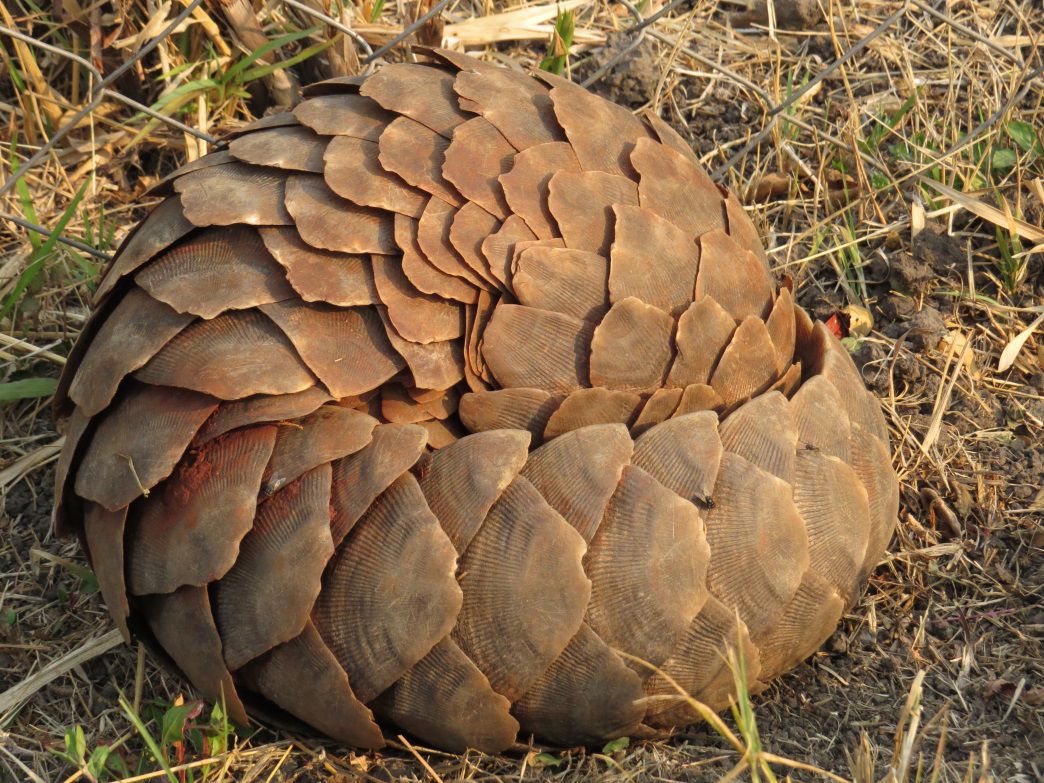 The COVID-19 virus most likely started in bats, but may have passed through pangolins before infecting humans. Here one of the Asian anteaters curl up to protect its with its armored scales — prized in many Asian countries as folk medicine. 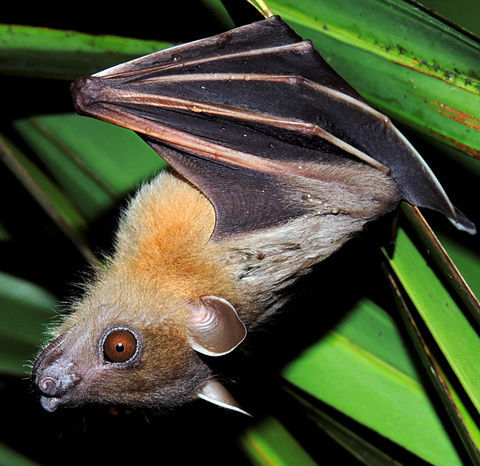 COVID-19 probably made the jump from bats to humans, which account for its virulence.

Bats have vigorous immune systems, which may account for why viruses that originated in bats do so much harm when they infect humans. These Mexican free-tailed bats are emerging from Carlsbad Caverns. Bat numbers have plummeted for a host of reasons, many linked to human use of pesticides and destruction of winter roosting sites.

The COVID-19 virus likely originated in bats, but may have also infected pangolins — an Asian anteater. Both bats and pangolins are sold illegally in Chinese wildlife markets.

The COVID-19 virus most likely started in bats, but may have passed through pangolins before infecting humans. Here one of the Asian anteaters curl up to protect its with its armored scales — prized in many Asian countries as folk medicine.

In a horror movie — COVID-19 would turn into a revenge flick: Nature strikes back.

No one has nailed down the genetic origins of the virus for certain. However, the best evidence suggests COVID-19 jumped from bats to humans, perhaps after passing through an endearing little anteater called a pangolin. Either source would be consistent with an origin in a Chinese wildlife market in Wuhan.

If the virus comes from bats even through the intermediary of pangolins that could account for the rapid spread and relatively high mortality rate of the virus — now pegged at somewhere between .07 of a percent and 3% in the general population. That mortality rate could rise to 8% to 12% in vulnerable populations, like elderly people with pre-existing health conditions.

Both bats and pangolins are sold in wildlife markets in China, often for use in traditional medications. Officially, China bans trafficking in pangolins, but in 2019, the government seized nine tons of pangolin scales from some 14,000 animals in a single shipment in Hong Kong. The next month, another 33 tons of pangolin meat were discovered in Malaysia and then on April 14 tons of scales in Singapore.

Bats have powerful immune systems, perhaps because they roost together in crowded conditions and travel widely. So their immune systems react strongly and powerfully to any infection. Infected cells release a pulse of interferon, causing neighboring cells to wall themselves off — preventing the spread of the virus.

All viruses have an intimate history with their preferred host animals. Viruses infect cells and trick them into making copies of the virus. The virus is made of RNA, which most cells use to regulate their activity. So the virus inserts itself into the host DNA and turns the cells into viral factories.

Normally, viruses do little damage to their hosts. The virus wants the host to live a long while, producing more copies of the virus for as long as possible. So the coronavirus rarely kills the bats. Everything changes when the virus jumps to a different species, without that long evolutionary history of co-existence.

The fast response system in bats makes the jump to another species with a more deliberate immune system especially dangerous, according to a study by researchers from the University of California, Berkeley published in the journal eLife.

Bats and the coronavirus have been in an arms race for millions of years. As the bats developed the quick immune response, the virus evolved methods of getting into cells quickly and quietly.

The human immune system relies heavily on fever and inflammation to help immune cells kill off viruses and bacteria. That’s one reason a wound becomes red and swollen as the immune system responds. But the quick-acting immune systems of bats have softened the inflammation response. So inflammation in a human host may end up doing more harm than good in battling the bat-evolved virus.

“The bottom line is that bats are potentially special when it comes to hosting viruses,” said Mike Boots, a disease ecologist and UC Berkeley professor of integrative biology, who was quoted in a summary of the research on the ScienceDaily website. “It is not random that a lot of these viruses are coming from bats. Bats are not even that closely related to us, so we would not expect them to host many human viruses. But this work demonstrates how bat immune systems could drive the virulence that overcomes this.”

Many bat species worldwide are facing big population declines, mostly connected to human activity. Humans have spread pesticides throughout the environment, affecting the insects on which most bats live. Humans have also disturbed many of the winter roosting sites of many bat species. The environmental disruptions may have contributed to the spread of a fungus that has devastated many bat populations in Europe and the US during their winter hibernation.

Scientists say bats have need of a super-sized immune system. They range widely, often cluster tightly together, have high metabolic rates and live for decades. They had to evolve efficient systems to mop up not only virus-infected cells, but the potentially toxic waste products produced by their fiercely beating little hearts.

This may account for their long lives. A bat can live for 40 years – while a similarly sized mouse won’t last more than two.

The researchers discovered that bat cell lines had a much more vigorous and effective response when exposed to different types of viruses than monkey cell lines.

The findings could explain the behavior of other bat viruses that have made the jump from bats to humans.

For instance, SARS jumped from bats to Asian palm civets and then to humans – again at a Chinese wildlife market. The coronavirus SARS first emerged in 2003 in China and spread to two dozen countries. It infected at least 8,000 people and killed 774. The respiratory virus did not spread widely in the US and died out after a year, perhaps as a result of mutations in the virus.

The MERS virus jumped from bats to humans through a still undetermined intermediary – most likely camels. MERS respiratory virus remained confined mostly to the Middle East. MERS produced 2,500 laboratory-confirmed infections and 854 deaths – a death rate of nearly 34 percent. Cases spiked in 2014 but the virus continues to circulate at low levels, mostly in Saudi Arabia.

Ebola likely moved from fruit bats to chimps and gorillas and then to humans in Africa, where people sometimes hunt and eat primates. Ebola caused severe bleeding and spread through bodily fluids rather than the air. The outbreak remained contained mostly to Africa, with a 25 to 90 percent fatality rate. The largest Ebola outbreak produced 28,000 infections and 11,000 deaths in Africa from 2014 to 2016.

The Marburg virus likely moved from bats to African green monkeys before moving into humans. Like Ebola, it causes massive bleeding with a fatality rate of more than 30 percent and is transmitted through bodily fluids. First reported in Germany in 1967. The virus has just seven genes, compared to the roughly 30,000 genes in a human cell. Researchers are still working on a vaccine.