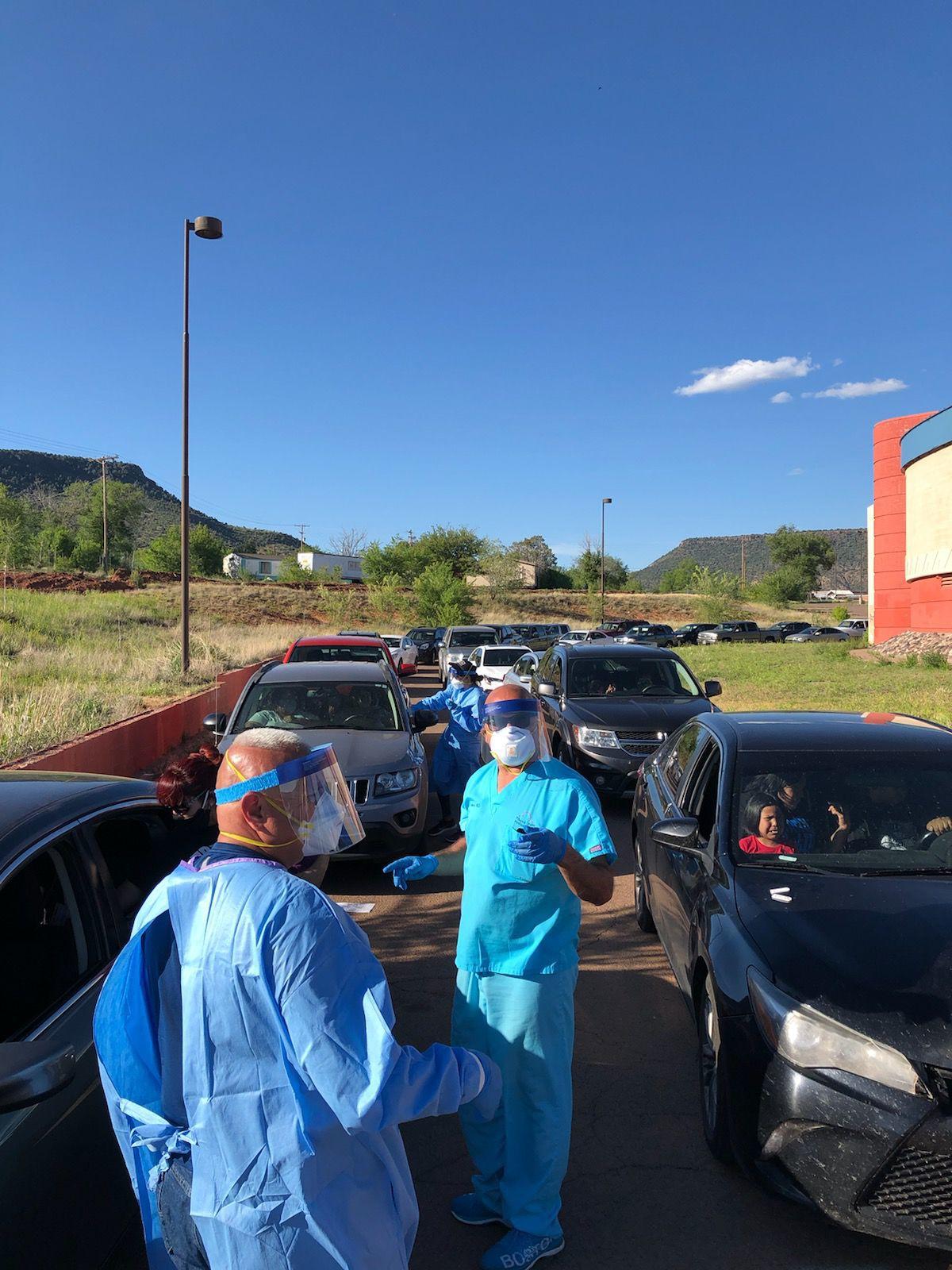 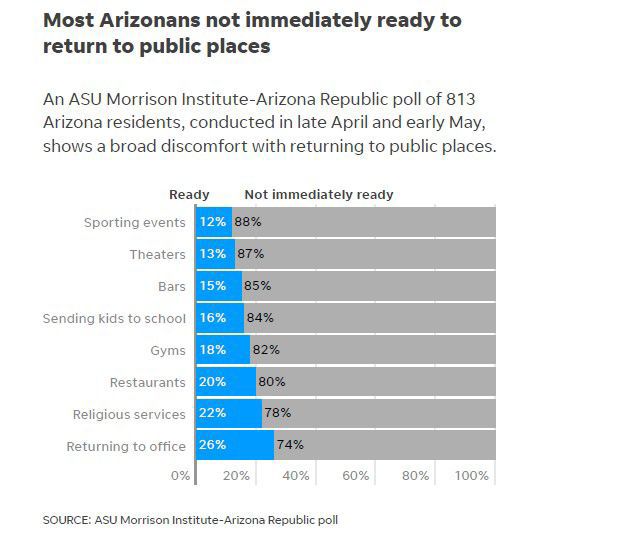 A poll of Arizona residents found only about 20% saying they’re ready to immediately return to dining in restaurants and only 26% said they feel comfortable immediately returning to work, despite the easing of the state’s “stay-at-home” order.

A poll of Arizona residents found only about 20% saying they’re ready to immediately return to dining in restaurants and only 26% said they feel comfortable immediately returning to work, despite the easing of the state’s “stay-at-home” order.

It’s a potentially lethal question: If 25,000 people jam into Payson for July 4 celebrations — will we spawn a “superspreader” event?

A growing body of research suggests that perhaps 10% of the people infected with COVID-19 account for 80% of the transmissions, according to research by Adam Kucharski of the Long School of Hygiene and Tropical Medicine.

No one can say for sure — given the developing state of knowledge about how the virus spreads from person to person. However, studies of “superspreader” events suggest loud, tight-packed events where people sing, speak loudly, shout and spend hours in close contact have produced clusters of cases throughout the world.

Extended religious gatherings, nursing homes, cruise ships, music venues, meatpacking plants and other gatherings have caused clusters — including a religious revival meeting on the Navajo Reservation that lay at the root of one of the nation’s worst infection rates. However, of 314 identified clusters with three or more cases studied between Jan. 4 and Feb. 11, only one originated in an outdoor setting.

Another study in China that did exhaustive contact tracing on 7,000 cases found only one case transmitted out-of-doors.

So sitting quietly on a blanket watching the fireworks overhead with thousands of other people for an hour or two likely poses a relatively low risk — providing you don’t bust out with the national anthem. On the other hand, gathering in a loud bar where you have to speak up to make yourself heard could more easily produce a superspreader event, according to the gathering body of research.

A host of factors produces such clusters, according to a summary of the research published in a news comment section of the journal Science.

The virus that causes COVID-19 apparently spreads most efficiently in large droplets produced by talking loudly, breathing heavily, singing and other activities that promote the exchange of air at close quarters. It can theoretically spread by touching contaminated surfaces and casual contact, but they have documented few such cases.

Some better known clusters include:

• A 2.5-hour choir rehearsal in which a choir member who’d been suffering from what felt like a cold for three days infected 53 members of the choir — two fatally.

• A dormitory for migrant workers in Singapore linked to 800 cases.

Another attempt to pull together information on superspreader events involving COVID-19 came to similar conclusions, according to the summary by Jonathan Kay published in Quillette.

Some people produce such large droplets more readily, due to the way they speak. Most people don’t produce a lot of the large droplets by breathing or even whispering. But coughing, singing, talking loudly or sneezing can produce a torrent of such droplets — perhaps a quarter teaspoon of fluid in a single cough.

Such a single cough or sneeze loaded with viral particles protected by droplets of moisture can travel 24 feet or more — far further than the six-foot social distancing recommendation. That finding makes wearing masks in public potentially vital, since the fabric can stop many of those droplets.

The article presented a summary of 58 superspreader events in March in 28 countries, plus ships at sea. Events included in the analysis included:

 Some 36 percent of 400 people screened in a homeless shelter tested positive for COVID-19, although about two-thirds of those infected had no symptoms.

 About 80 percent of the cases in Iceland were linked to wealthy people returning from European ski vacations.

 About 17 percent of the superspreader cases were linked to religious services or missionary work. Many of those events included a mix of indoor and outdoor activity – which often included singing.

 About one-third of the events involved parties or festivals, generally involving alcohol.

 About 20 percent took place on warships or cruise ships.

 Three of the clusters involved spectators at sporting events.

Superspreader events take place “wherever and whenever people are up in each other’s faces, laughing, singing, shouting, cheering,” concluded Kay.

Those models suggest that infections events depend on a handful of individuals in the population who have far more contacts than most. The research suggests that locating and contact-tracing these “superspreaders” will contain the pandemic much more effectively than testing the mass of the population.

Google scientists Ofirii Reich and Guy Shalev applied the programs developed to track influence and information online to disease models, posting their study on the pre-print server medRxiv — which means it hasn’t been peer reviewed to check their conclusions.

They found COVID-19 has spread mostly through these infectious clusters, which resemble the spread pattern in two related viruses — MERS and SARS. By contrast, the flu virus doesn’t produce such pronounced clusters, suggesting it’s not as reliant on the short-lived heavy droplets.

No one’s certain why a relatively few individuals account for much of the spread of these three, related coronaviruses. It could have to do with the immune systems of the superspreaders — so they spread a higher concentration of the virus when they breathe, talk or cough. But researchers haven’t identified such physical differences so far, either in the strain of the virus transmitted or in the immune systems of the superspreaders.

However, the researchers concluded that social networks account for much of the difference, with some people moving much more frequently from one networked group of people to another.

They concluded testing remains the key to preventing a smolder of infections from turning into a wildfire, but said the emphasis should be placed on contact tracing and identifying these superspreaders, rather than mass testing of the entire population.

No one can say for sure.

But if you’re standing in a crowd of people waiting for the fireworks under the starry sky, consider wearing a mask. And if they ask you to sing the national anthem — maybe everyone should just hum.

Another article by Pete “ The sensational” Aleshire. Why not post some positive articles once in awhile?

People in 1918 thought the flu pandemic was over and they held massive parades then tens of thousands died. Reporting scientific facts about how a virus is spread isn't sensationalism if you truly feel that Covid is a nothing burger than you should put your money where you mouth is and go volunteer maskless in a covid ward.