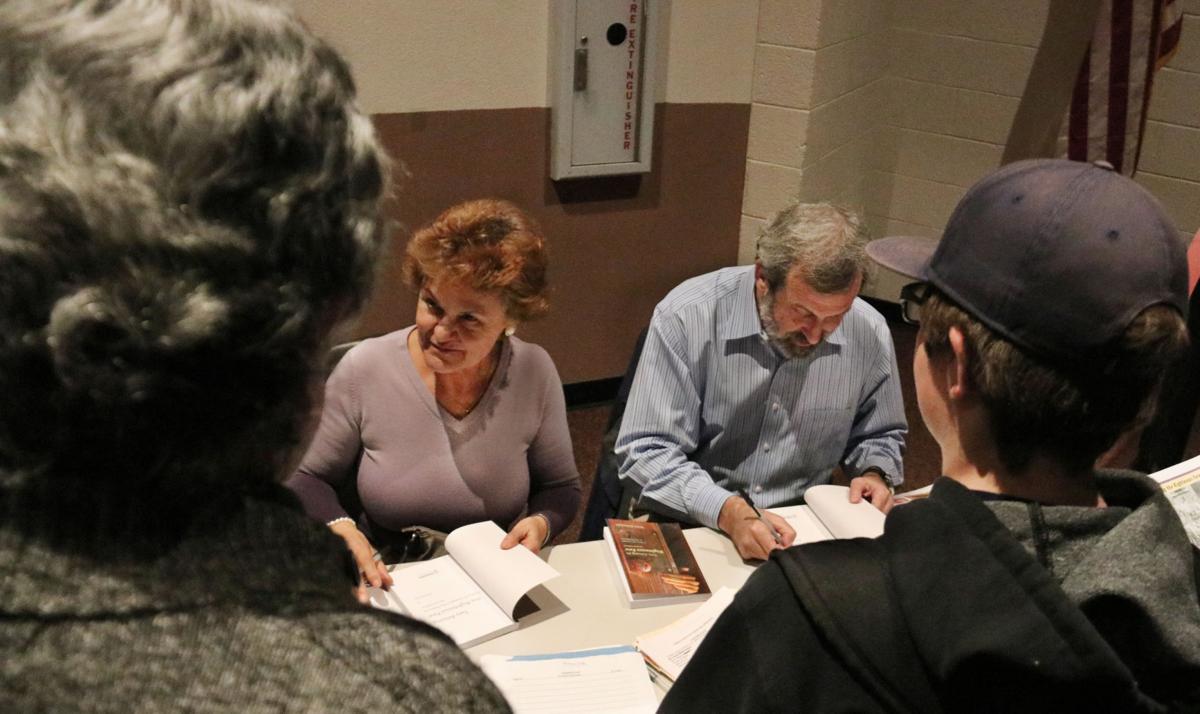 Leah and Marty Brounstein sign copies of his book on the holocaust after a presentation at Payson High School. 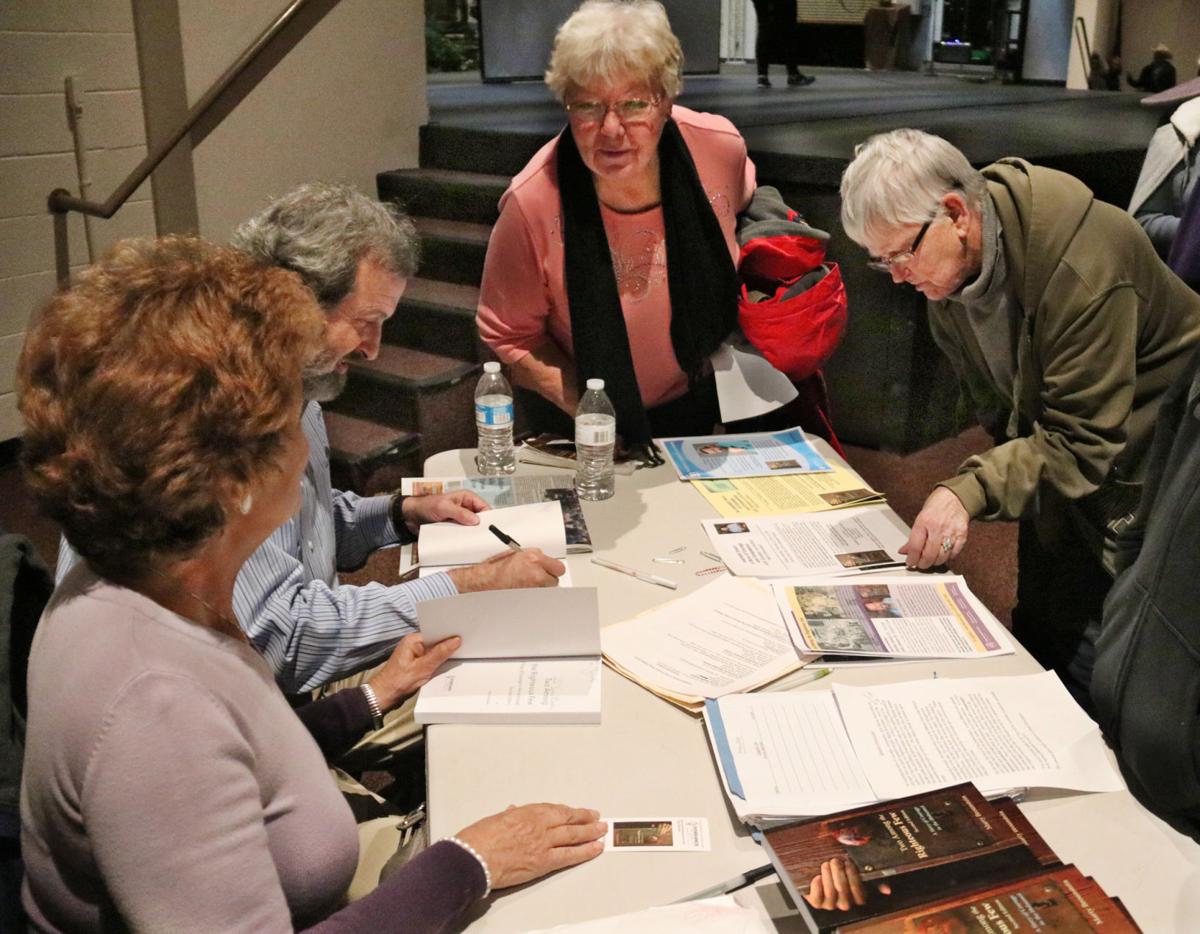 The audience of around 250 people enjoyed spending a few moments speaking with Leah and Marty Brounstein after his presentation based on his book, “Two Among the Righteous Few.”

Leah and Marty Brounstein sign copies of his book on the holocaust after a presentation at Payson High School.

The audience of around 250 people enjoyed spending a few moments speaking with Leah and Marty Brounstein after his presentation based on his book, “Two Among the Righteous Few.”

One recent poll found only half of Americans can provide details about the Holocaust during World War II.

Many who do say they have heard of the holocaust say they think it’s a hoax.

Ignorance runs especially deep amongst schoolchildren — especially given the struggle to keep history courses from getting crowded out by the emphasis on reading, math and basic academic skills.

But at least 250 Rim Country students now have a searing, inspiring account of the Holocaust — which included the systematic murder of an estimated 6 million Jews during World War II.

To combat ignorance about the horrors of World War II, Rim Country Middle School social studies teachers and Principal Jennifer White arranged for public speaker and author Marty Brounstein to tell the true story of two heroes from Holland who helped Jews survive the darkest days of the Holocaust.

Brounstein spoke of Frans and Mien Wijnakker, two Catholic citizens of Holland who stepped up to save dozens of Jews. His rapt audience included 250 students, parents and members of the community on Jan. 23.

History has since named these acts the Holocaust.

Brounstein described how the Germans methodically killed large groups of innocent civilians if they even happened to live in the neighborhood where a strike or acts of resistance occurred.

“Your life was a nightmare trying to survive,” said Brounstein.

He explained that in Holland, where the Wijnakkers lived, many of the citizens served as forced labor. When they rose up in anger and protest, 100,000 hit the streets to strike. The Germans then with precision identified, arrested and killed the ringleaders.

After that, the Germans responded to any sabotage or resistance by rounding up and executing 50 or more people — whether they were involved or not.

“This was life in the Netherlands,” said Brounstein.

When asked to destroy his radio, Frans hid it. He continued to listen to underground reports on the status of the war coming out of Britain, one of two countries still standing in 1942 when the Americans finally got into the fight.

Instead of keeping his respectable job at the mill near his home in Deiden, Frans decided to sell eggs and meat, rare items in Nazi-occupied Holland, on the black market of the city.

A daring change in career, but Frans had no fear.

Then, Frans veered into the resistance movement.

“In the spring of 1943, he calls on a doctor friend,” Brounstein said, “The doctor asked if Frans would help house a young girl. ‘Let’s say you took her out to Dieden,’ said the doctor, ‘Oh, and by the way, she’s Jewish.’”

Now, for historical reference, at the time of World War II, 300 million people lived in Europe. Of those, 6 million Jews were slaughtered.

In Israel, at Yad Vashem, a museum dedicated to Holocaust Heroes such as the Wijnakkers, there is an Avenue of the Righteous. In this garden, plaques with the names of Holocaust Heroes line the path.

Brounstein said there are only 26,000 recognized.

“Not many answered the call to help,” he said.

As the war ground on, Frans and Mien ended up placing more than two-dozen Jewish refugees amongst their neighbors.

A scary proposition as many people were more than happy to turn someone in as the Germans favored turncoats with good food and good jobs.

Among the dozens the Wijnakkers saved, a young Jewish couple. He was an architect who helped Frans build a “hiding room,” which often came in handy.

Now this young couple, explained Brounstein, were expecting a child.

“Trying to get a baby born, it was basically impossible,” said Brounstein. “The authorities monitored births.”

So, the Wijnakkers registered the baby as theirs.

She took on a Dutch name.

In fact, Brounstein married her.

She now goes by the name of Leah Baars. When she turned 14, she and her parents immigrated to the U.S.

Here, Leah went to school graduating from UCLA to become a teacher and have two girls of her own.

Brounstein met Leah and the two have been married for more than a decade.

“Chapter 11 explains the whole thing,” said Brounstein. “It’s been almost 11 years — I married that baby and I get to call her my wife. It doesn’t get any more meaningful or special.”

This personal story lies at the heart of the Rim Country Middle School eighth-grade study of World War II.

RCMS students will read Brounstein’s book, “Two Among the Righteous Few: A story of Courage in the Holocaust.” Then in March, Brounstein will return to facilitate a book discussion with the students.

He said discussions always end up lively and students touched by the personal nature of the history.