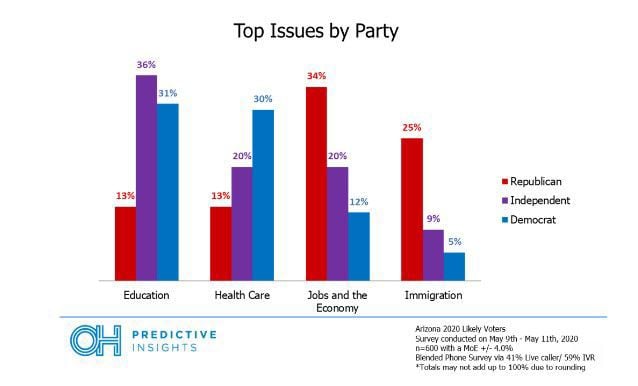 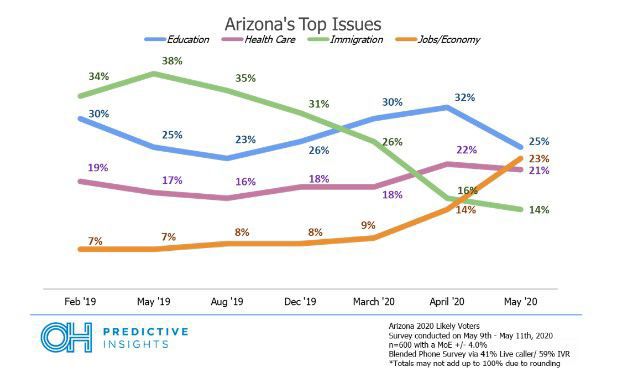 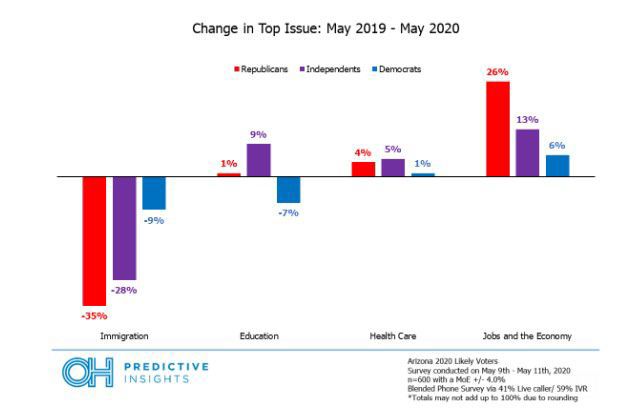 The pandemic has upended voter priorities, dramatically shifting the issues landscape of the election in Arizona, according to a just-released poll.

Education, the economy and health care have become the top issues for most voters, with the once dominant debate about immigration dropping far down the list — especially for Democrats and independents, according to the OH Predictive Insights poll of 600 likely voters.

The altered priority list will likely change the landscape of the looming election. That could affect the intensely competitive local state house, senate and congressional race.

“A near-depression has a way of rearranging the priorities of Arizona voters,” said OH Predictive Insights pollster Mike Nobel. “No longer is immigration top of our minds. We want our leaders to focus on healing our economy after this disastrous spring.”

For independents, education ranks as the No. 1 concern, with the economy and health care tied for second place.

Partisan divisions have hardened the gap between registered Republicans and Democrats in Arizona, even on seemingly non-political questions like wearing masks and social distancing. However, independents in Arizona account for nearly a third of the voters, which means they normally decide general elections.

At the moment, the priorities of the independents more closely match the policy agendas of the Democrats, according to the poll.

Some 36% of independents, 31% of Democrats, but only 13% of Republicans listed education as their top issue.

With health care, 20% of independents and 30% of Democrats listed it as their top priority. That compares to just 13% of Republicans.

The economy ranked as the top concern for 34% of Republicans, 20% of independents and 12% of Democrats.

The gap continued to grow when it came to immigration — the issue that dominated the 2016 election in Arizona. Some 25% of Republicans still consider immigration the top issue, but only 9% of independents and 9% of Democrats. Even among Republicans, immigration has plummeted as a key issue — just since December 2019, when 60% listed it as the top issue. Concerns about the economy in the age of the pandemic have largely crowded out immigration.

The big race or the primary pits incumbent state Sen. Sylvia Allen (R-Snowflake) against challenger Wendy Rogers, a retired Air Force pilot and frequent candidate. Allen chairs the senate education committee, linking her to education in the minds of voters. Rogers has so far focused mostly on immigration, with harsh attacks on Democrats. Her frequent press releases and fundraising emails have virtually never mentioned either health care or education.

Felicia French is running unopposed for the Democratic nomination for the District 6 seat. She has mostly stressed education and health care in her campaign. positions and is currently working as a volunteer nurse on the Navajo Reservation, which has the worst COVID-19 outbreak in the country.

In the District 6 House race, incumbent Republican Walt Blackman and former Rep. Brenda Barton have the Republican nomination locked up. Neither focused strongly on education or health care, focusing more on issues like land use, abortion, resistance to federal regulations and oversight and free market economies.

Flagstaff Mayor Carol Brown has all but secured the Democratic nomination, with a campaign focused mostly on health care and education.

Independent Art Babbott, now a Coconino County supervisor, is also running for the seat. His platform has focused on forest restoration, the economy and education.