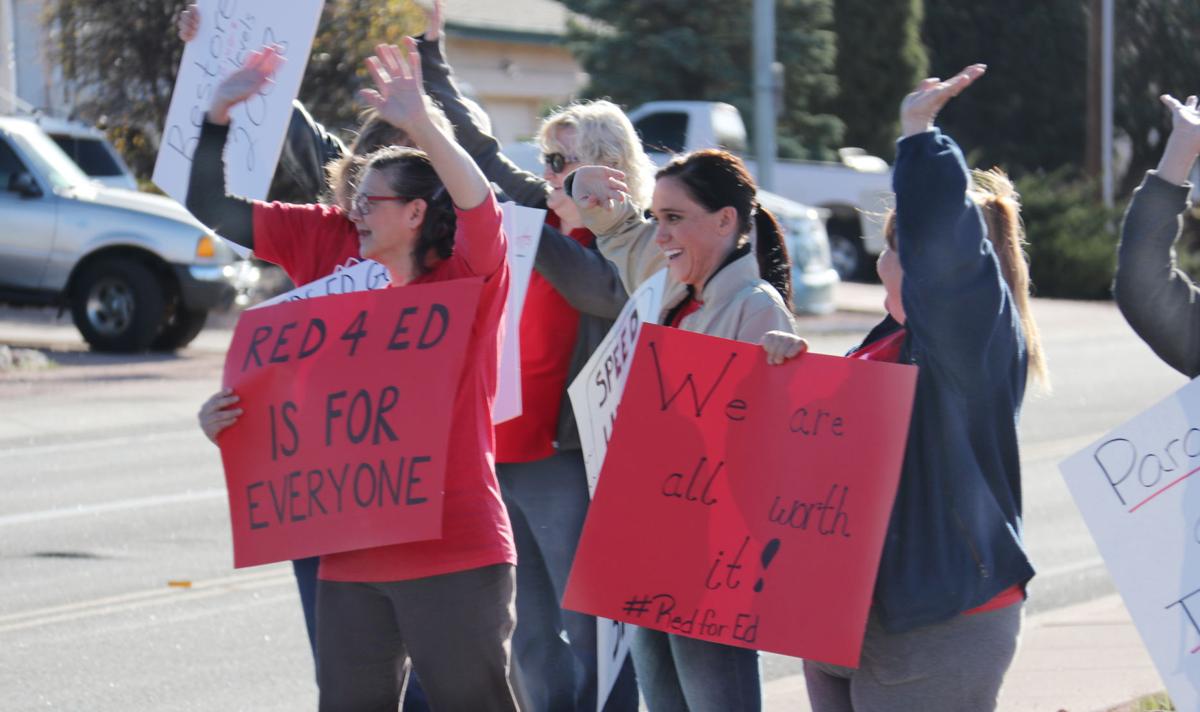 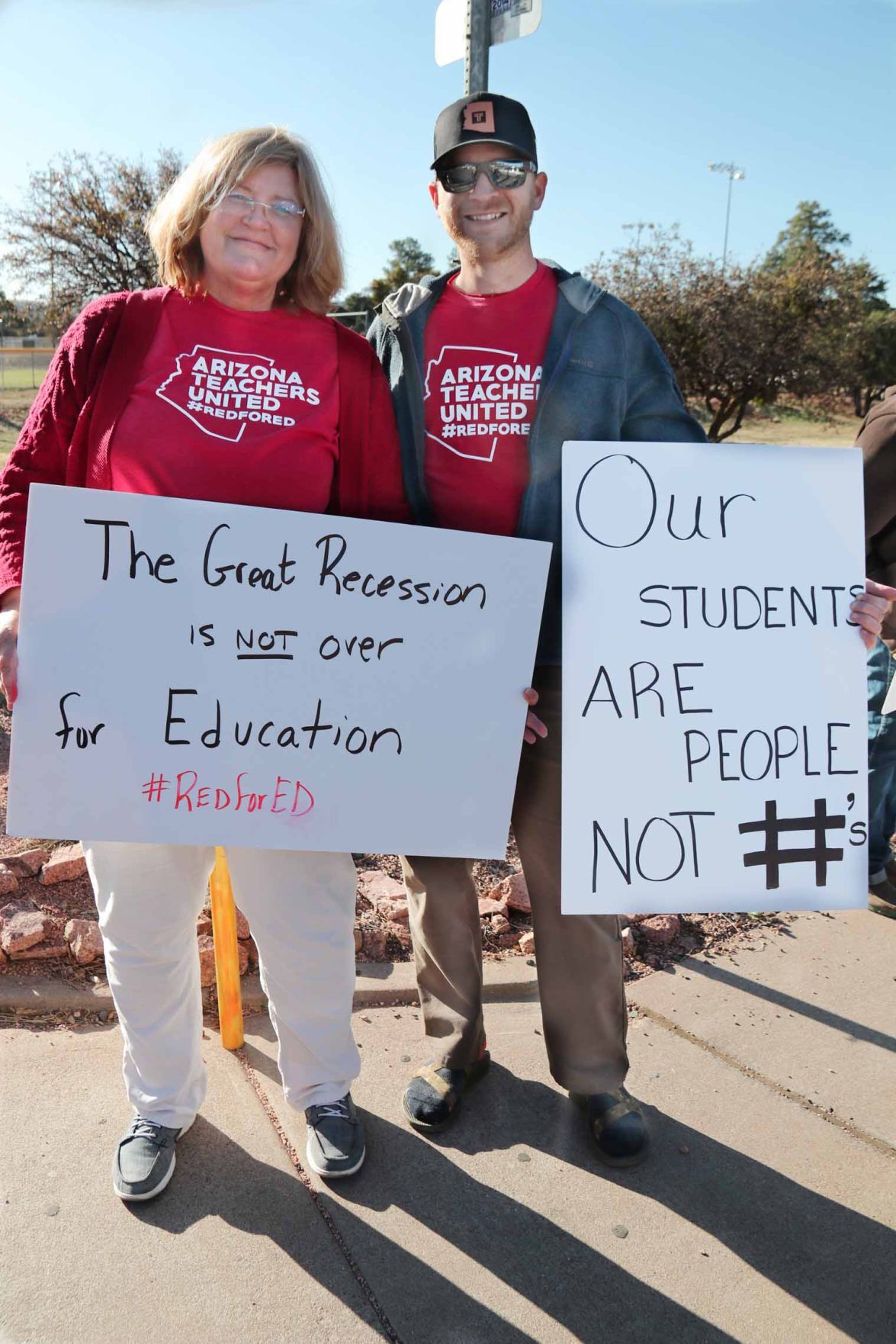 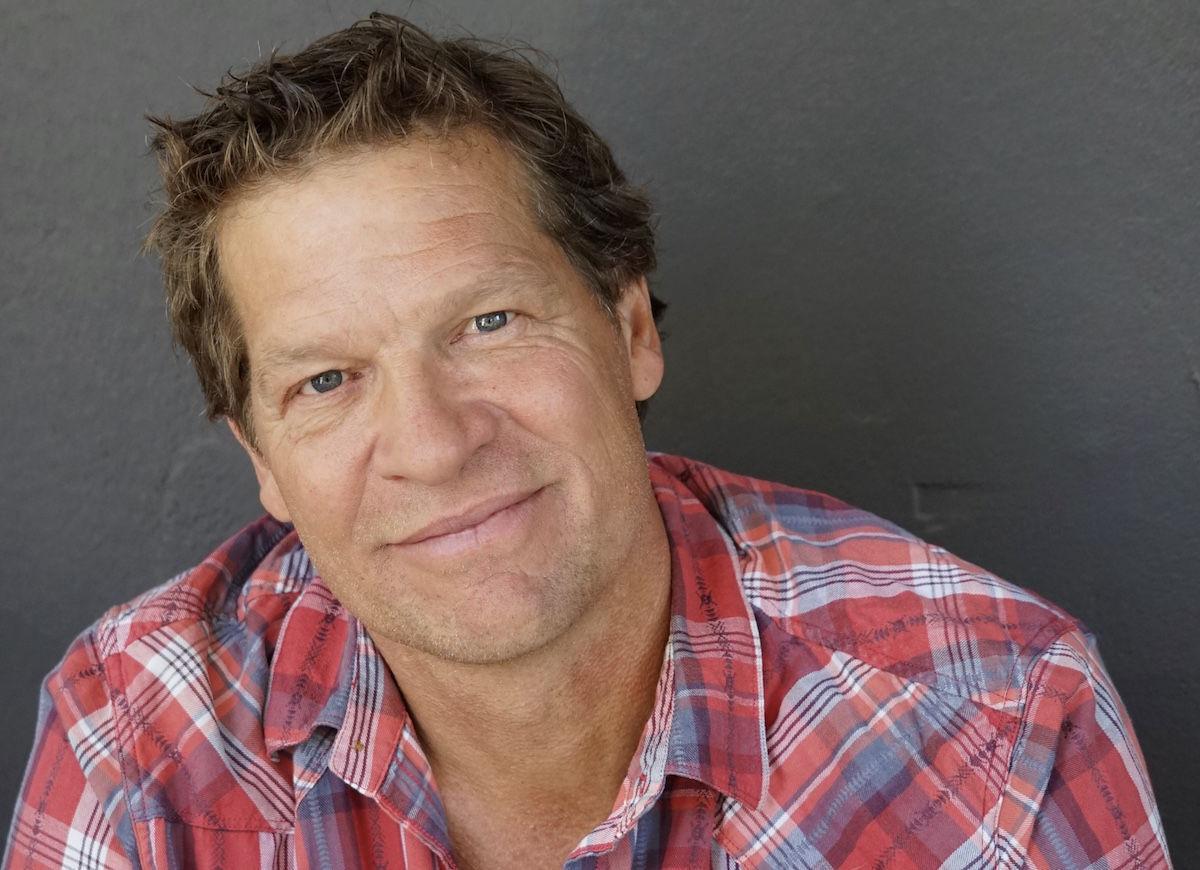 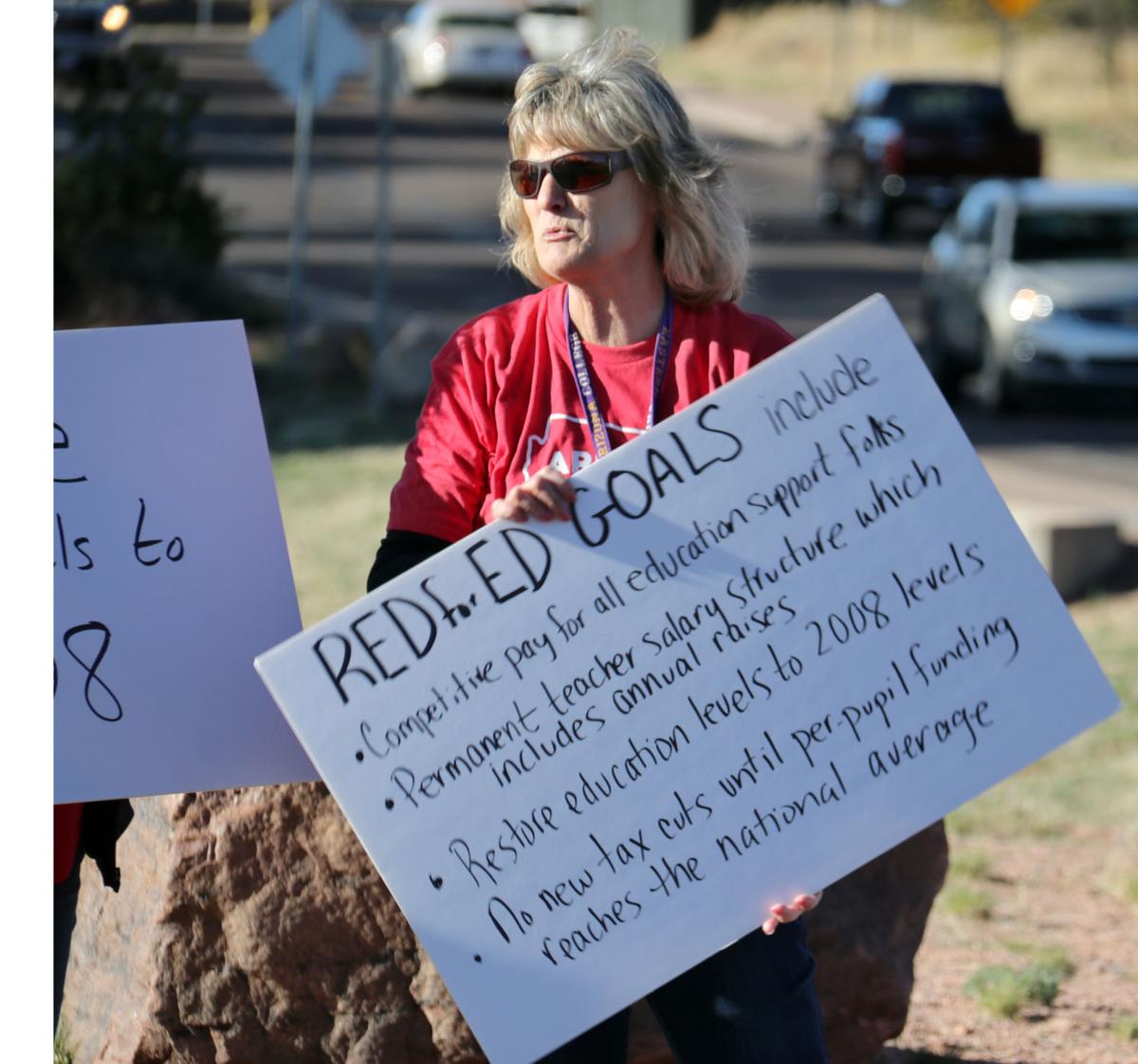 GEAR UP coordinator Jackie Wallace holds a sign during the Red for Ed movement earlier this year.

The high court overturned a Superior Court judge’s ruling that the 100-word description of the Invest in Education ballot measure on the top of the signature gathering forms wasn’t so incomplete that it invalidated the 435,000 signatures gathered.

The high court is still pondering the fate of three other challenged ballot measures. One would legalize recreational use of marijuana, one would give judges more discretion in sentencing people convicted of “non-dangerous” offenses and the third would mandate pay hikes for hospital workers, ban health insurance discrimination for pre-existing conditions and impose new infection standards on hospitals. Opponents have challenged the signature-gathering efforts for all three measures.

The Invest in Ed measure would raise nearly $1 billion annually for K-12 education, earmarked mostly for teachers and support personnel pay raises and increased teacher recruitment and retention. Currently, Arizona spends about $6 billion on K-12 schools, with an enrollment of more than 1 million students. The new money would come from increasing the maximum income tax rate on people making more than $350,000 for a single taxpayer.

Placing the measure on the ballot in the midst of an education-upending pandemic could drive the state legislative campaigns in a state whose education system ranks among the worst-funded in the country. Arizona has among the largest class sizes and the lowest teacher salaries in the nation.

Moreover, many education experts say the pandemic will likely make the existing teacher shortage even worse, as many older teachers opt for retirement rather than return to in-person classes with the virus still uncontrolled. The Arizona Legislature has already loosened or waived the normal teacher credentials to cope with a growing shortage of qualified teachers. Arizona now has one of the highest percentages of uncredentialed teachers in the classroom.

Evans, a former teacher and mayor of Flagstaff, said, “The Legislature has had over 10 years to restore desperately needed funding to schools. Time and time again they failed to provide the funding to pay teachers, to provide for nurses and guidance counselors. For a decade, there hasn’t been enough money for textbooks, broken down buses, or leaky roofs. And then a pandemic hit. The Legislature failed to fund education and it’s no wonder voters took it into their own hands, good for them. If the representatives in LD6 listened to their constituents, this wouldn’t be necessary.”

“The Arizona Supreme Court ruled unanimously that the Invest in Ed voter initiative should be on the ballot in November. The right of voters to collect enough signatures to place initiatives directly before the voters is guaranteed in Arizona’s Constitution. When Arizona’s elected leaders fail to take reasonable action to improve teacher pay, reduce class size, and prepare the workforce of tomorrow, the citizens need to exercise their constitutional rights and lead for them. No voter initiative is perfect, but the perfect should not be the enemy of the good. If passed, Invest in Ed will do what the Legislature would not — increase teacher pay and school funding for charter and public schools. I support both Invest in Ed and Arizona’s initiative,” said Babbott.

District 6 runs from the Grand Canyon to Alpine and includes all of Rim Country and the White Mountains. Considered a potential swing seat, the district has attracted more than $1 million campaign donations already. The other candidates did not return requests for comment prior to press time.

This represents the second attempt to ask voters to nearly double the maximum income tax rate for the top 4% of state earners. A judge threw out a nearly identical attempt two years ago based on technical concerns about the language on the ballot petitions. A Maricopa County Superior Court judge threw out the signatures again this time over different concerns about the 100-word description of the new tax formula the measure would impose.

The Supreme Court panel disagreed and put the measure back on the ballot. County elections offices continue to validate a sampling of the 435,000 signatures submitted. The backers need 237,000 valid signatures to make it onto the ballot.

The Arizona Legislature has repeatedly cut the state’s income tax rate and Gov. Doug Ducey has vowed to eliminate it. Arizona has the 12th most regressive state tax structure in the country, according to the Institute on Taxation and Economic Policy. This means low-income and middle-class people pay a larger share of their income in taxes than the wealthy. The state relies heavily on the regressive sales tax rather than the progressive income tax.

The Arizona Chamber of Commerce opposes Invest in Ed and brought the lawsuit seeking to keep it off the ballot.