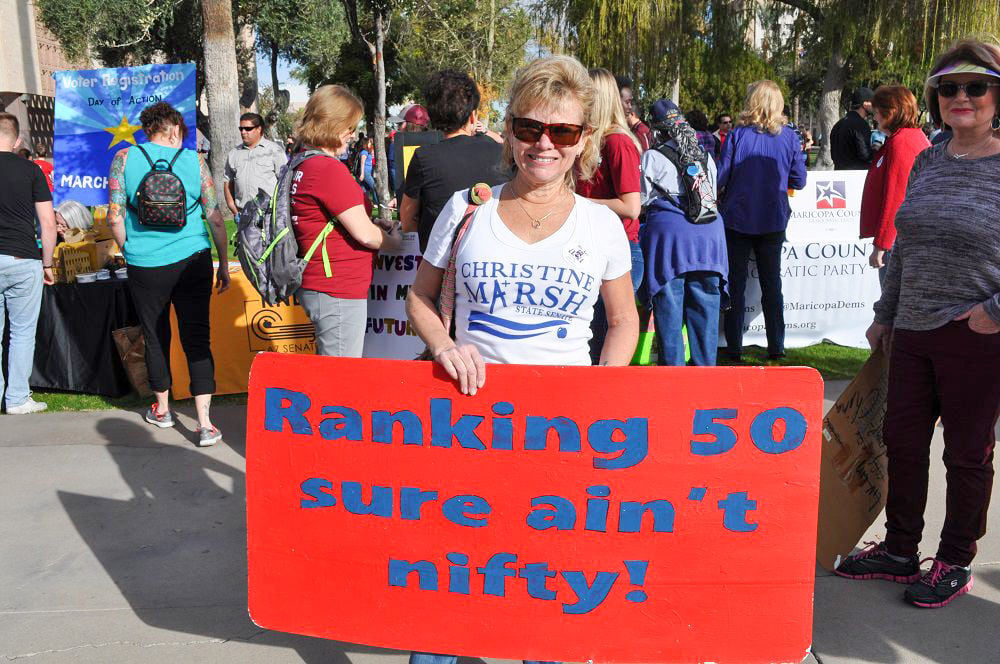 The Arizona Senate has approved a massive expansion of the state’s $145-million school voucher program that could expand eligibility for taxpayer money to cover private school tuition from about 10,000 students to perhaps 700,000 students. Save Our Schools has vowed to fight the increase. 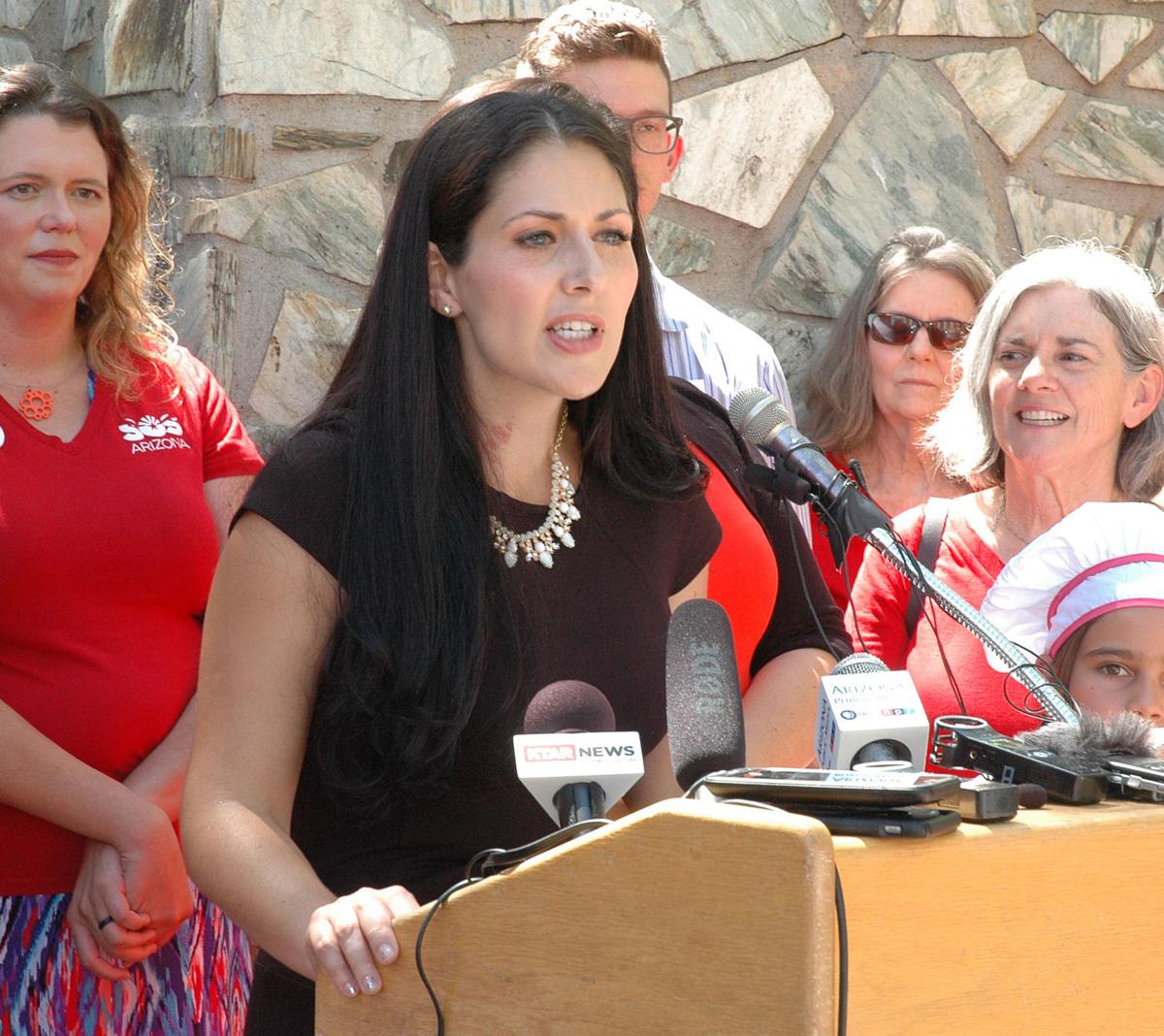 Dawn Penich-Thacker, spokeswoman for Save Our State Now said the group will once again go to court and mount a new referendum campaign if the House follows the Senate’s lead and approves a massive expansion of taxpayer funded vouchers for private school tuition and costs.

The Arizona Senate has approved a massive expansion of the state’s $145-million school voucher program that could expand eligibility for taxpayer money to cover private school tuition from about 10,000 students to perhaps 700,000 students. Save Our Schools has vowed to fight the increase.

Dawn Penich-Thacker, spokeswoman for Save Our State Now said the group will once again go to court and mount a new referendum campaign if the House follows the Senate’s lead and approves a massive expansion of taxpayer funded vouchers for private school tuition and costs.

The Arizona Senate has passed a potentially massive expansion of private school vouchers on a straight, 16-14 party-line vote, just two years after voters decisively rejected a much less expansive bill.

Currently, some 10,000 Arizona students qualify for $145 million in taxpayer money to attend private schools. The Joint Legislative Budget Committee has said the change would likely increase the annual cost in the short term to $300 million.

But that financial toll could increase dramatically. If SB 1452 passes the House and gets signed by the governor, it might expand eligibility to perhaps 700,000 children — two-thirds of the 1.1 million kids in Arizona schools.

Backers said the Empowerment Scholarship Accounts (ESA) will help poor students stuck in bad schools by giving parents a real choice. The bill would open the program to any district receiving Title I funds — which flow to about two-thirds of the districts in the state.

Backers also argue that the voucher expansion would actually save districts money, since the vouchers amount to 90% of the per-student funding that flows to public charter schools.

The bill has the strong support of all the District 6 representatives, including Senator Wendy Rogers and House members Brenda Barton and Walt Blackman.

In 2018, 65% of voters approved a referendum that overturned a previous effort to expand vouchers. That bill would have extended eligibility to every student in the state, but had a total enrollment cap.

The constitution prevents lawmakers from violating the “intent” of a voter-approved initiative. However, it’s unclear if that prohibition also applies to voter approved referendums — which overturn a law passed by the legislature.

Opponents said the voucher expansion will “devastate” public district schools, already among the most poorly funded in the country. They said the effect of the current program has been to increase segregation in urban schools, a contention supported by an investigation by The Arizona Republic. The roughly $7,400 taxpayer grant per student generally doesn’t cover the full cost of private school tuition, so the vouchers have gone mostly to parents who can afford to pay the difference.

Save Our Schools organizers who backed the 2018 referendum vowed to launch a new effort to block SB 1452 and several companion measures.

The bill comes amid a historic decline in public school enrollment due to the pandemic. Most school district this year have suffered a 10-15% decline in enrollment as parents have kept their children home or shifted them to private schools with smaller class sizes. Districts fear massive budget cuts if those students don’t return once vaccinations tame the pandemic. Now they also worry many parents will take advantage of the massive expansion of the voucher program to leave district schools permanently.

Rural schools are also concerned about a massive shift in state funding to urban areas. Most of the private schools that can take advantage of the vouchers are in urban areas. Payson does have one private school —the Payson Christian School — which continued to offer in-person classes during months that Payson district schools shifted to distance learning.

Arizona has the most extensive school choice movement in the country, with a growing network of public charter schools and the growing number of taxpayer-supported private schools. School choice advocates say only competition from more flexible and creative private and charter schools can prod public district schools to improve — while also empowering parents.

However, Arizona also ranks near the bottom nationally in per-student funding. National surveys show Arizona has among the lowest teacher salaries and the largest class sizes in the country.

The current law limits the vouchers to students attending public schools that get a D or F rating that they’ve attended for at least 100 days. SB1452 would extend eligibility to any student who has attended a Title I school for 30 days.

The bill also contains few protections against misuse of the vouchers to pay for things not directly related to school. Investigations have turned up cases in which parents have stockpiled the voucher money. SB 1452. The law includes oversights for the private and religious schools that would receive the voucher money.

Bill author Sen. Paul Boyer dismissed opponent’s claims that the bill will lead to more segregation of public schools, as white parents in relatively wealthy urban districts shift their children to private schools that have sprung up in many wealthy suburbs of those urban districts.

He said the bill targets Title I schools based on family poverty rates. “To say this bill somehow promotes segregation is preposterous,” said Sen. Paul Boyer. “A family choosing for themselves any school that works best for their own child? That’s not segregation, that’s freedom. Assigning families to inferior schools based upon their home address is fundamentally the true segregation problem that we face today.”

However, the Joint Legislative Budget Committee says that as the law is written, any student from a Title 1 school could use the voucher regardless of family income.

Sen. Rebecca Rios (D-Phoenix) said if the bill was really intended to help poor children in failing schools, it would have included an income cap. She noted that the bill will result in a massive transfer of taxpayer funding from struggling rural school districts with few private schools for parents to choose from to private schools in Phoenix, Scottsdale, Paradise Valley and Tucson. “How in the world is that right?” she asked.

Among the additional provisions of the bill:

• Takes money from the voter approved 301 to reduce class sizes, increase teacher salaries and reduce dropout rates and adds that to the vouchers.

• Allows parents to use voucher money to pay for public transportation to a more distant school site.

• Prevents parents who misspend the money from losing funding unless the Arizona Attorney General determines an account holder committed fraud. Currently, misspent money is forfeited rather than returned.

• Allows parents to spend the voucher money on any portion of educational therapies not covered by health insurance.

This is great news for our state! In our household, we like being able to direct our state taxes to expenses and projects we support. I do not respect any comments coming from Sen. Rebecca Rios. She was the primary sponsor, along with 11 other Democrats and 0 Republicans, of SB1625. This was the bill being put forth last year for massive gun control in our state which would have had zero effect on crime and would only put more restraints on law-abiding citizens.

Lets bring the light of truth and transparency to this intentionally misleading article. For those who are interested in improving the educational process for our families - especially the critical focus of the process, our students, allowing parents to decide the best option for their children is this decade's civil rights number one issue.

Another math fact! SInce 68% of the PUSD revenue comes from property taxes and property taxes are NOT impacted by this parental choice, PUSD will have essentially 88% of current funding to spend on the remaining students if one-half choose the option to leave their government care. That would essentially mean that the district would have nearly twice as much money per student - a huge benefit if spent appropriately.

The only "losers" are the monopolistic teacher unions and their self serving lackeys that have consistently put their dues paying members interests above the interests of the families and "children" they are paid to serve.

It is time to force the NEA, AEA, and school superintendents to be dragged kicking and screaming into the 20th century. That's right, the 20th Century. While all the rest of our American industries are humming along in the 21st Century, our government schools are still operating under a system created 200 years ago.

If you want our students to be able to compete in the international economy, we must update the antiquated process.

PS: The offer remains extended to Peter to meet and be provided with overwhelming facts straight from the PUSD required reports and Arizona Auditor General annual reports. Perhaps with an in-depth foray into those facts will allow him to write a follow-up article to provide unbiased and accurate information to the readers.

It is nice to see that our state legislature is thinking more about our students than the teachers' unions. It is possible that some teachers' jobs could move from the government-run schools to private ones. I suspect the unions fear that some of the private schools may not be unionized, resulting in a reduction of dues income to the unions.