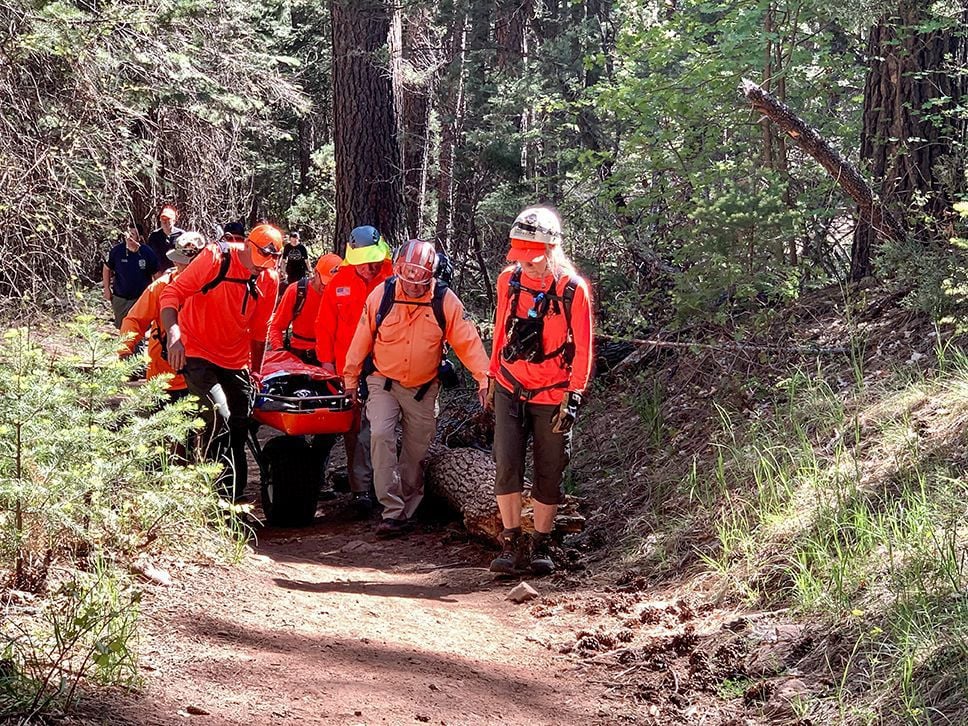 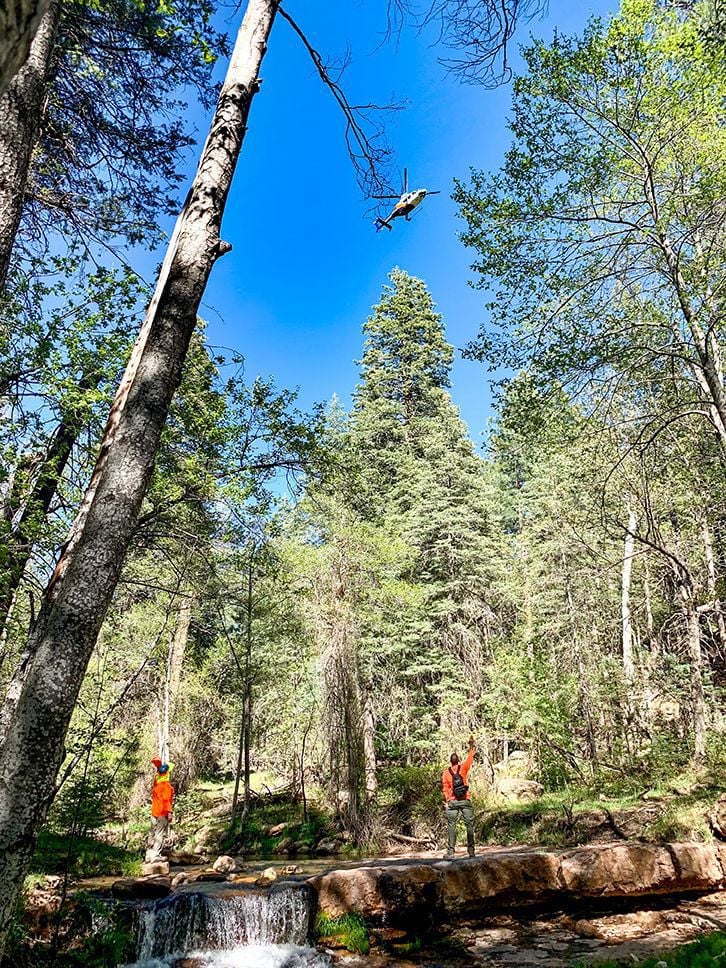 The Arizona Department of Public Safety airlifts a man off the Horton Creek Trail. He is the second hiker Tonto Rim Search and Rescue volunteers (seen here in orange) have helped off the trail in recent weeks.

The Arizona Department of Public Safety airlifts a man off the Horton Creek Trail. He is the second hiker Tonto Rim Search and Rescue volunteers (seen here in orange) have helped off the trail in recent weeks.

Quarantined, heat-stressed visitors are flooding Rim Country, with a rush of calls to rescue the unprepared and deal with illegal parking and crazy drivers. Already, Tonto Rim Search and Rescue has gone on 14 rescues this year, 10 of them in the past month.

It is not even summer yet and residents are already noticing an uptick in weekend visitors.

Across the Tonto National Forest, officials say they are seeing an unprecedented number of visitors — despite imposing fire restrictions and the closure of campgrounds and popular gathering spots.

The closure of many sites and businesses in the Valley may actually be driving an increase in visitors to Rim Country.

When Gov. Doug Ducey issued his stay-at-home executive order, he also encouraged residents to get out and recreate.

In March, the Forest Service closed many day-use sites, restrooms and other developed recreation facilities because of COVID-19.

In his letter, Driscoll said the Forest Service’s decision to close campgrounds and trailheads was done arbitrarily and without the input of partners.

However, the sheriff’s department must help enforce these closures.

“The U.S. Forest Service’s closure of designated campgrounds and recreation sites absent the ability to enforce these restrictions is evidence of the lack of inclusion, partnership and cooperation with local public safety agencies for these decisions,” Driscoll wrote.

“We are doing the best we can with the resources we have available but unprecedented visitation levels have stretched some of our resources thin,” said Anne Thomas, acting public affairs officer with the Forest Service

On the road leading to the fish hatchery east of Payson, vehicles line the narrow roadway on the weekends as hikers head out on the Horton Creek Trail, creating a headache and a safety hazard. More hikers means more rescues. TRSAR has helped two injured hikers off the trail in recent weeks.

“This year is definitely the worse we’ve seen it,” said Michelle McDaniel, who lives off the Tonto Rim Ranch Road in Tonto Creek Estates. “Each year the popularity increases and there just isn’t enough room for the amount of traffic.”

McDaniel recently posted a photo on Facebook showing vehicles up both sides of the roadway, leaving barely enough room for a vehicle to pass in the middle.

On May 8, Tonto National Forest officials took to social media to remind visitors to park legally and safely, including photos of the road to the fish hatchery.

While the Forest Service patrols the area on the weekends, visitors clog the road when officers leave to check other areas.

“To discourage unsafe and illegal parking, we’ve ordered No Parking signs for sections of the road where poor roadside parking impedes traffic, specifically in the Horton/one-lane bridge area. The signs should be installed before Memorial Day, if not sooner,” Thomas said.

The Gila County Sheriff’s Office says it doesn’t have the staff to patrol for illegal parking.

“We try to get there as quickly as we can, but priority calls will always take precedence over anything else,” he said.

The same thing’s happening on Houston Mesa Road, between Water Wheel and Third Crossing. With only 40 designated parking spots at Water Wheel, people park along the road. On some weekends, more than 147 vehicles have been counted along that stretch of the road.

“Even once we have the staffing to open this site, the sheer volume of user demand overwhelms this day-use site,” Thomas said.

“I understand it would be hard to deal with restrooms and such,” he said, “but people are out there anyway.”

Shepherd said he doesn’t blame residents for wanting to get out and enjoy the forest, but the Forest Service’s decision to close certain sites just shifts the crowds.

“It is just madness now,” he said.

He would like to see the Forest Service reopen the campgrounds and developed sites.

Thomas said even if all of the sites were open, current public use exceeds capacity.

“The number of visitors we are receiving cannot be accommodated at our developed sites even if all our facilities were open,” she said. “If parking lots are full or closed, visitors should visit another location or come back at a less trafficked time rather than practice unsafe or illegal parking.”

Scott said people are just looking for a place to get out. Unfortunately, that is putting a strain on “everybody.”

“Everything is just jam-packed,” Scott said.

Another popular place for visitors and a headache for rescuers: Fossil Creek.

While the Forest Service has closed Fossil Creek from the Camp Verde side, you can still get a permit to hike in from Strawberry. Visitors need to get a permit online to park at the trailhead, but people are hiking in without permits.

Crews recently helped two hikers off the 4-mile Bob Bear Trail, formerly known as the Fossil Creek Trail. Both were overheated and throwing up. One had hiked in with a group without a permit.

A third hiker nearly needed rescue Monday night after becoming so dehydrated he started throwing up. He managed to reach the lower parking area on his own after rehydrating, said Bill Pitterle, TRSAR commander.

Thomas said they have redirected seasonal employees hired to tend the Bob Bear Trailhead to help patrol and address safety concerns, including the campfires forest users are creating, despite the ban.

“Forest Service Law Enforcement patrols the area, some of our officers have been on duty on heavily trafficked areas for up 20 days straight. We also have a special agent that assists us during his day off. Additionally, we have recruited an additional officer for the Payson/Pleasant Valley and he should be onboard in the next few weeks,” she said.

If you are heading out on a hike, officials have a few tips. First, if the parking area is full, go somewhere else. Do not park illegally.

Second, know your own limitations and plan accordingly.

“It is your responsibility to get the necessary skills and abilities to pursue these and other outdoor activities. Be realistic about your skills, abilities, and fitness levels that are required for some trails around Rim Country,” said Alicia Keller with TRSAR.

She recommends carrying these essentials:

Water: Take at least 32 ounces or a lot more depending on the length of your hike.

Clothing for the environment or season. Avoid cotton.

Emergency blanket: To keep you warm and dry, and can be used to signal

Flashlight or headlamp, plus extra batteries

Map of the area

Firestarter and matches or lighter. Always have two ways to make a fire

Given this flood of Valley people stretching our resources and breaking permit and parking laws, why can't we write citations to pay both the associated costs and generate us some badly needed "revenue"? Plus the word would get out and there would be fewer incidents of law breaking, and perhaps less overcrowding.