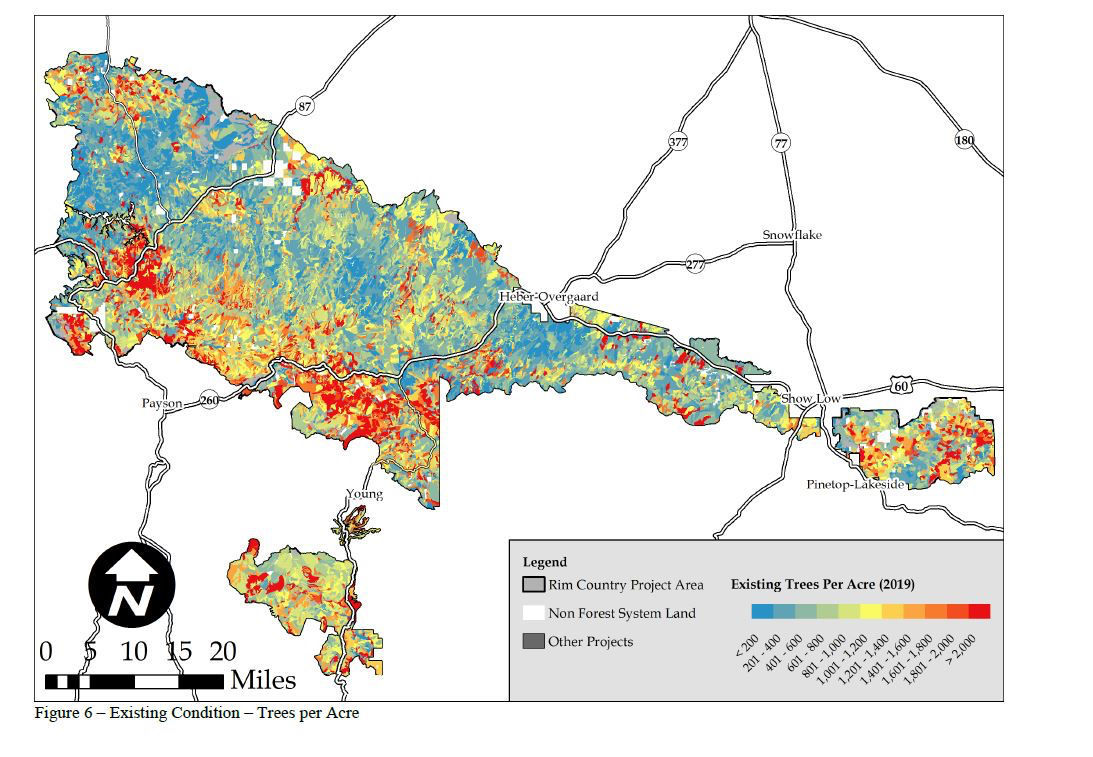 But can anyone make money on cutting it?

That’s the fatal question lurking at the heart of the latest installment of the Four Forest Restoration Initiative (4FRI).

The answer will likely determine whether the Forest Service can restore millions of acres of forest — in the process saving mountain communities from wildfire and Valley communities from disastrous damage to the watersheds on which they depend.

The environmental assessment (EIS) for 4FRI’s Rim Country Project covers some 1.2 million acres in the Rim Country and White Mountains. An earlier assessment focused on roughly 1 million acres, mostly centered on Flagstaff and stretching across the North Rim of the Grand Canyon.

The Rim Country EIS includes hundreds of pages of detail on the amount of wood out there for contractors to harvest.

Tree thickets have grown across a vast area, thanks to a century of cattle grazing, big-tree logging and fire suppression. The Forest Service hopes it can lure large scale contractors to remove most of those trees, dangling a seemingly endless supply of wood, a 20-year contract and a streamlined environmental assessment designed to eliminate the logjams of the past.

Previous generations of loggers cut most of the big trees and left the little trees behind. This new style of logging will focus on those small trees. So consider the goals by the size of the trees available.

Here’s the current per-acre supply of trees by diameter versus the trees per acre in that size class after 20 years of thinning:

Recent court decisions have underscored the importance of the consensus approach to forest restoration. A federal judge halted timber projects in a broad swath of the Southwest — including the Tonto National Forest —for lack of a sound plan to save the Mexican spotted owl. The tiny owl occurs throughout the 4FRI study area — especially along the canyons in the face of the Mogollon Rim. The owls depend on thick stands with old-growth characteristics for nesting. The 4FRI EIS includes a detailed prescription for thinning projects around spotted owl nesting and foraging sites. The prescription gives contractors clear guidelines and would dramatically reduce the odds of a forest-destroying crown fire, which would wipe out the owls completely.

So, 4FRI sounds like a win, win, win — with enough trees to make a lumberjack sing.

Well, we have some fine print.

For starters: The Forest Service also wants the contractors to get rid of the biomass — the trees too small to do anything with, the branches and the downed logs. After a century of fire suppression, the forest has about 20 or 40 tons of this almost worthless biomass on every acre. In fact, the biomass will make up about half of the material the contractors will have to remove.

And then there’s this: The contractors will have to build most of the mills and processing plants needed to turn all that wood into profit. Arizona once had a network of sawmills to handle big trees — mostly greater than 24 inches in diameter. Those trees are almost all gone — and it takes about 400 years to grow another one.

The EIS noted that former logging practices removed almost every big tree loggers could reach, leaving behind the biomass. Harvests peaked at 443 million board feet in 1990. They helped transform an open, grassy forest dominated by old-growth trees with clumps of thicker tree thicket groves.

Only a handful of mills and wood processing operations remain — mostly in the White Mountains. The 15-year White Mountains Stewardship Project kept a couple of sawmills and one biomass burning power plant in operation. But the key to the stewardship project was a federal subsidy of about $400 per acre so contractors could afford to deal with the biomass.

4FRI assumes all that wood and a long-term contract will lure a company with millions to invest in sawmills, particle board plants, oriented strand board operations, and biomass burning plants.

Alas — so far it hasn’t happened.

The Forest Service in 2012 awarded a contract to thin some 300,000 acres to Pioneer Forest Products, on a promise to build sawmills and turn the biomass into jet fuel. But Pioneer sold the contract to Good Earth a year later. But Good Earth never thinned more than about 15,000 acres. Last year, the company merged with another timber company, but still isn’t anywhere close to the 50,000 acres-per-year pace envisioned in the original project.

Even if the contractor hits a 50,000 annual pace, it would take 50 years to work through the 2.5 million acres in the project area.

Wait — it gets worse.

The riddle of the biomass stymied the original 4FRI contractors. The existence of Novo Power in Snowflake explains why the surviving mills and logging companies in the White Mountains have thinned about four times as much as the 4FRI contractor.

However, the Arizona Corporation Commission recently voted narrowly not to require utilities to generate perhaps 90 megawatts of electricity from biomass. As a result, Novo Power might have to shut down when its current contracts with the Salt River Project and Arizona Public Service run out in 2024. That could cripple thinning efforts, even with those millions of trees available.

The Rim Country 4FRI EIS laid out the condition of the forest and the potential for logging in hundreds of pages in its report on silviculture.

The report envisions thinning and logging projects on some 900,000 of the 1.2 million acres —followed by periodic controlled burns once tree densities have been reduced.

The analysis predicts something of a tree holocaust if we don’t take action now.

Currently, some 74 percent of the trees are so stressed and densely packed together that they’re at high risk of a bark beetle infestation. That total will likely rise to 82 percent in the coming years without treatment.

In a normal, healthy forest only 10 or 15 percent of the forest should be the prey to bark beetles.

Most of the forest is now vulnerable to crown fires — with flames spreading directly from tree to tree through interlocking branches. In a natural, low-density forest only about 10 percent of the tree stands would be vulnerable to crown fires — which would burn themselves out once they moved through a stand — separated from the next stand by a stretch of low-density forest. Such a forest would have a hard time burning down Payson.

But here lurks the great irony of 4FRI.

First, we tried to save the forest for the loggers.

But we bungled it.

So now we may lose the forest.

Unless the loggers can save it.

But that means the project must pencil out.

Which they won’t if we kill the market for biomass.

And so the bungle continues.