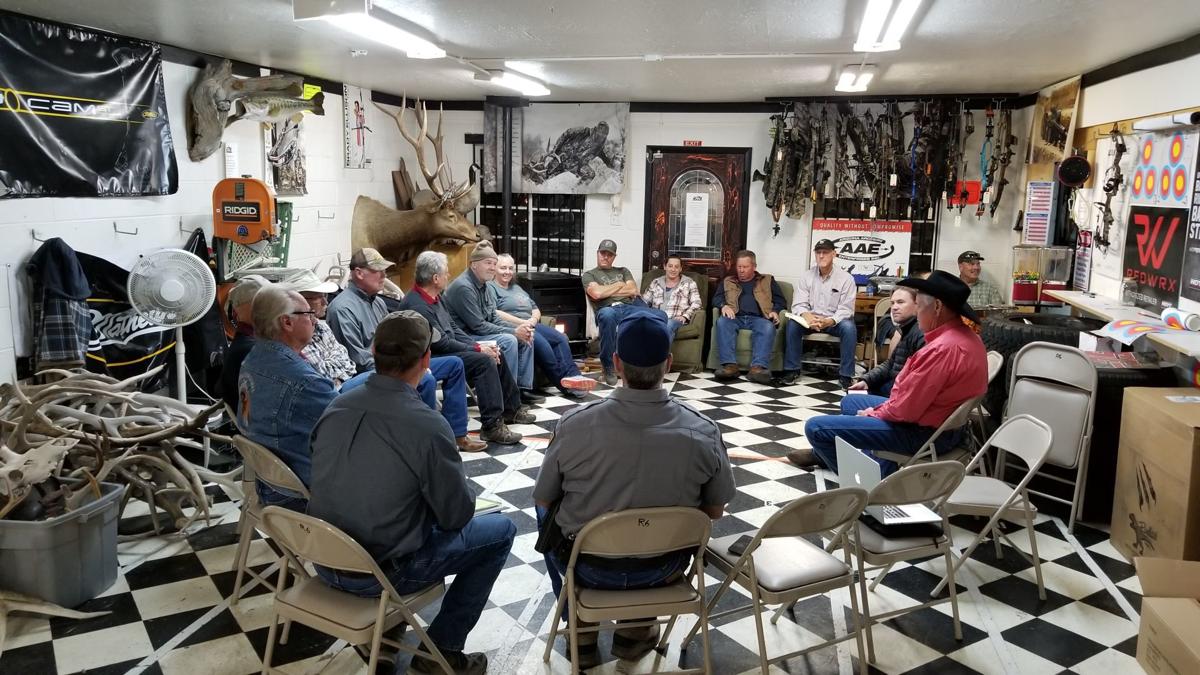 Some 20 people attended the Arizona Game and Fish Department Open House at Chasin’ A Dream Outfitters in Payson on Wednesday, Dec. 4. 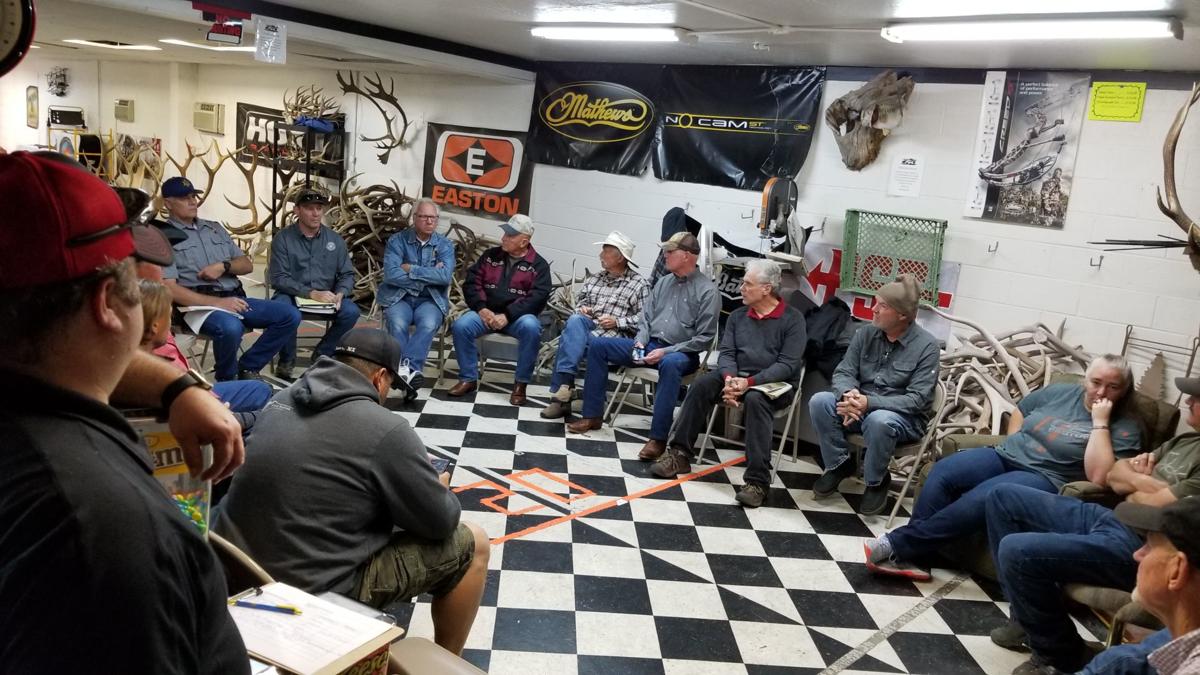 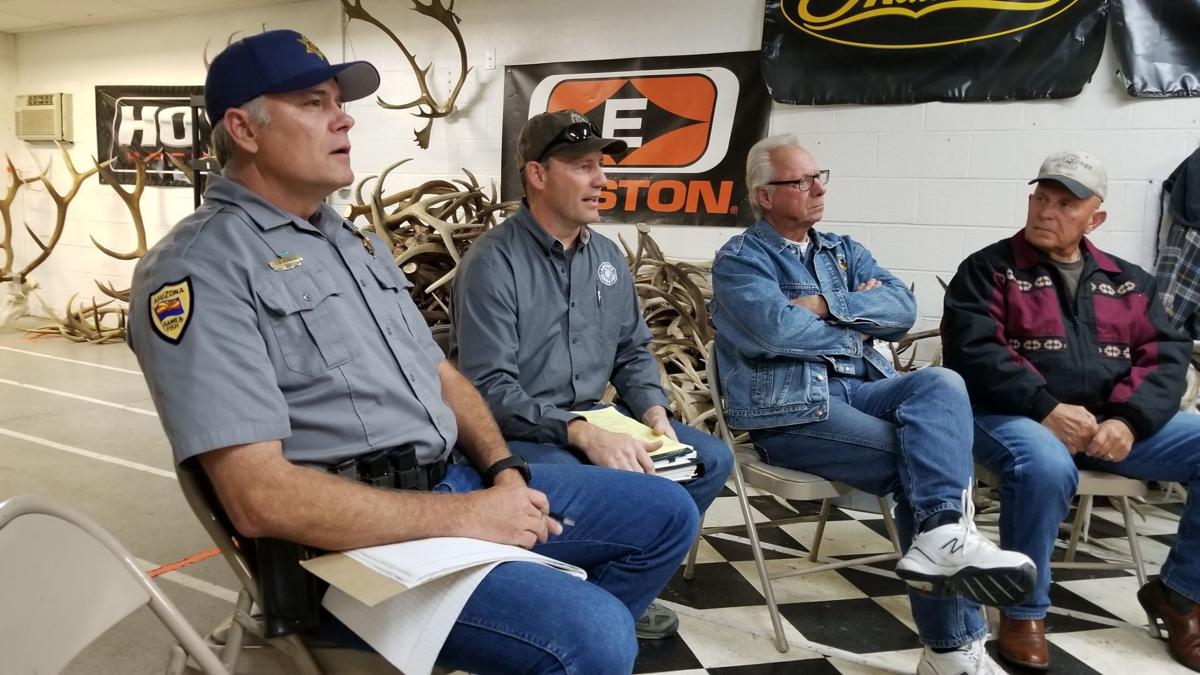 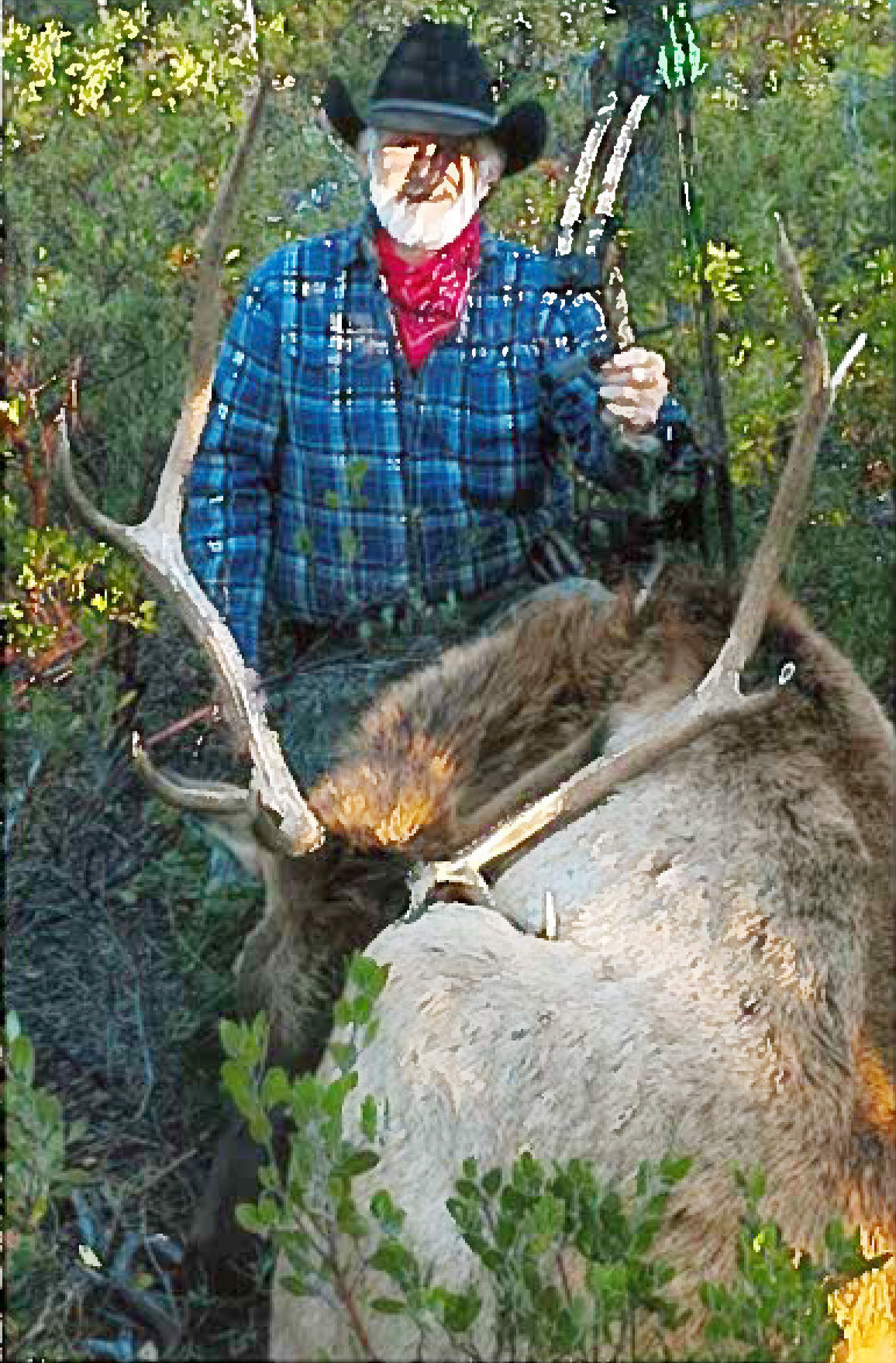 Harry Shill with the 4 x 5 elk he shot on an archery hunt in Unit 22 North. The Strawberry resident harvested the elk just before his 80th birthday.

Some 20 people attended the Arizona Game and Fish Department Open House at Chasin’ A Dream Outfitters in Payson on Wednesday, Dec. 4.

Harry Shill with the 4 x 5 elk he shot on an archery hunt in Unit 22 North. The Strawberry resident harvested the elk just before his 80th birthday.

Passions ran high during an Arizona Game and Fish Department Open House Dec. 4 at Chasin’ A Dream Outfitters in Payson.

Payson’s Jim Goughnour, an AZGFD commissioner, was among those in attendance for the second AZGFD meeting in Payson in eight months. The department also answered questions at the same location in the previous event on April 9. Only eight people attended that session.

But the number more than doubled for this event, which was scheduled for 90 minutes, but lasted more than two hours.

Frustration over a lack of large elk in Unit 22, which includes Payson, and possible solutions dominated the event.

Payson professional angler Clifford Pirch was among the most vocal. He makes a living fishing, but has also been an avid hunter for decades.

Darveau said the quality of elk in Unit 22 has “probably” dropped in the last 20 years.

“No probably about it,” Pirch shot back. “They rarely get older than 3 years. When I see a 3-point with six cows during the rut and he’s the herd bull, something’s wrong. That was rare 15 years ago, but that’s a common thing now.”

Chasin’ A Dream owner Jeremy Ulmer wanted to know why the AZGFD doesn’t reduce the number of tags in Unit 22 South.

“Inside the last 10 years you could find a 370 to hunt and expect to kill a bull around that size,” he said. “Not anymore. That herd down there has been hit very hard.”

Hunters are looking for solutions. Many believe too many elk are harvested each year and would like tags limited.

The open house would have continued on if AZGFD would have allowed it.

“We can debate that for five hours,” Darveau said of the subject.

Darveau said comments received by AZGFD about Units 22 North and South don’t reflect the feelings he was hearing on Wednesday night.

“We have never gotten more than 20 comments in a year,” he said.

Some in attendance said that’s because hunters don’t feel like their comments matter.

Darveau said they matter and that if more people made their feelings known to the AZGFD changes may more likely be considered.

Pirch pointed to turkey hunts as an example of how out of touch he believes AZGFD is about what’s going on in Unit 22.

“I’m passionate about this,” Pirch said. “How can you have a turkey hunt in Unit 22? That’s just crazy. Good luck finding a turkey.”

“Population surveys feed all that,” Darveau said of the rationale for the hunts and the number of tags issued.

The AZGFD also sends out hunter surveys to a random sampling of hunters to gather other data and social interest from the public.

Well, the surveys don’t reflect the feelings of most hunters, according to many in attendance. Most said they’ve never received a survey.

“I’ve got to fall back on the numbers from the population surveys, the harvest results and the parameters of hunt guidelines for permit recommendations,” Darveau said.

“The numbers are wrong,” said an attendee named Daniel. “It’s not rocket science.”

“I feel like the public input you’re receiving is not from the hunters,” Ulmer said.

Ulmer said something needs to change to make sure AZGFD is receiving more input from hunters.

“I don’t believe you’re getting the hunter input because I’ve never been surveyed,” Ulmer said.

A nurse in the audience wondered why AZGFD doesn’t make surveys mandatory for getting a hunting license or tag. “Why not make them take the survey before they can apply for a tag?” she asked.

“You don’t want a 50-question survey to apply for a tag,” Darveau said.

But several hunters said they’d be OK with that.

Pirch said there are way too many bull tags in 22 North in the current environment of information, big optics and long range shooting.

“When we went to this opportunity hunting, that’s when it went downhill,” Pirch said. “A bull can’t get older than 3 years in 22 now because of (long range shooting). There’s no where in 22 you’re not 1,000 yards from somewhere.”

Darveau addressed the issue of wounding an animal at such a long distance, saying the numbers on some hunts can be troubling.

“Some places, we have a 15 to 20 percent wounding loss during some hunts; it’s staggering,” he said. “It’s a waste of game meat. It’s the ethics of hunting, that’s the difficult part.”

Bryan Miller of Star Valley asked about the possibility of an urban hunt for Star Valley, where large elk herds roam residential areas on a nightly basis. He’s not a fan of a recent law prohibiting archery hunting within a quarter-mile of a structure. It’s an issue in both Pine and Star Valley.

“Can’t we get that quarter-mile reduced to 150 yards, something where we can still manage that population?” Miller asked.

“No, we can’t, that requires a rule change,” Darveau said.

“Why not?” Miller responded. “You’re here to listen to us.”

“You asked a question and I answered it,” Darveau said. “It’s a legislative rule process that goes through the Governor’s Regulatory Rule Council and the review and rule-making recommendations under Article 3 doesn’t come up again for another (three) years. Rules cannot be changed in that five-year time frame unless something dramatic happens.”

Mandatory reporting was another topic that drew plenty of response.

“Why not mandatory reporting?” asked Bryan Miller. “They have it in Missouri. You just make a phone call and press 1 or 2 and hang up.”

Darveau said a phone system is extremely expensive. And he said AZGFD can’t go to mandatory reporting until they upgrade their system.

“Colorado tried this and wishes they hadn’t,” he said.

Some talked about their concern that a reduction in motorized trails that are under consideration in the Tonto National Forest’s upcoming travel management plan won’t allow them to retrieve killed game with a motorized vehicle such as a UTV, as well as in Coconino National Forest.

A hunter from Sunflower said he’s never drawn an elk tag in his three years living in the area and asked about increasing the price for a tag to cut down on the number of applications.

“We looked at that and that was shot down hard in our surveys and during the public input process,” Darveau said.

Some wondered why they hold these open houses if they aren’t listening to the comments and making changes based on them. Many think AZGFD doesn’t care what hunters think.

“If we didn’t care, we wouldn’t hold these meetings,” Darveau said.

“Well, we’ve never seen one of these meetings equate to rules changes,” Ulmer responded. “We discussed the same topics as last year and the year before that with no avail. That’s why we end up with 23 people in this room.”

Someone in the audience complimented Darveau for an “excellent job dealing with a testy group.”

“I don’t take any of it personal,” Darveau said.