Check your email for details.

Your purchase was successful, and you are now logged in.

A receipt was sent to your email. 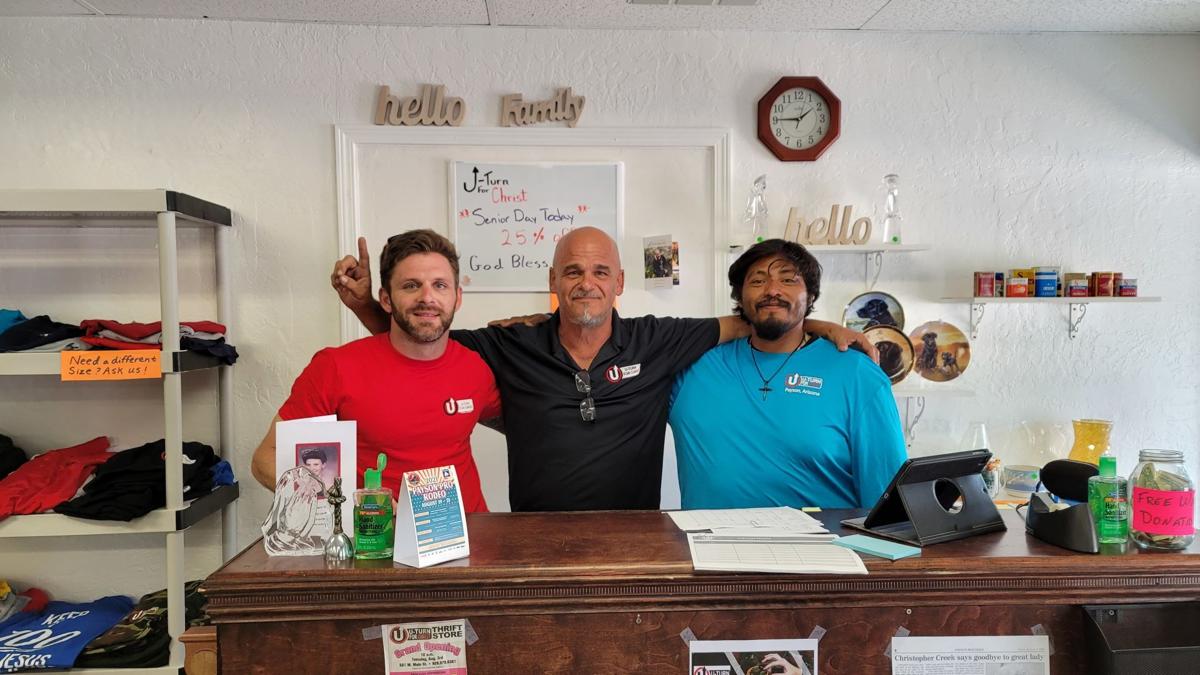 The U-Turn For Christ thrift store has a selection of used furniture and other goods.

The U-Turn For Christ thrift store has a selection of used furniture and other goods.

“I just came by to check out your store,” someone said as they walked into the U-Turn For Christ Thrift Store in Payson.

There’s quite a bit to check out from all the furniture and a wide variety of merchandise.

But it’s more than just a store.

It’s a lifeline for a dozen men in need of one.

Tucci believes in second chances. He proves that every day in his role with U-Turn For Christ in Payson.

The thrift store just opened, but U-Turn For Christ is not new to Rim Country.

“U-Turn For Christ has been in Payson for 15 years,” Tucci said. “We just opened the thrift store this month.

Tucci has been a pastor for more than 30 years, the last 22 with U-Turn For Christ.

“This is my passion, to teach the Bible,” he said.

He said U-Turn For Christ helps men in need of a new direction find that path.

“(Pastor Brown) started reaching out in Southern California and was part of Calvary Chapel,” Tucci said. “Chuck Smith originally reached out to the hippies, so he found a need that the church wasn’t meeting, which was drug addicts and alcoholics, some coming out of jail, repeating that process. Some family members, mothers and fathers that just couldn’t control their children, were exasperated. They’re Christian, know God, but just can’t seem to get off drugs and alcohol.”

“So, what we created was a discipleship ranch. Now there’s 15 of them in this country and we have (another) 14 worldwide. Pastor Jerry Brown was in the Navy, I was in the Army.

He describes phase one as a two-month boot camp.

“Just like the armed services, where it’s a blackout, stringent,” Tucci said. “We put on parameters so they can hear from God and God can hear from them, so to speak.”

But there’s much more to U-Turn For Christ than that.

Tucci teaches the Bible twice a week. But he’s not alone with U-Turn For Christ. Tucci is just one of multiple pastors teaching men who’ve struggled with either addiction or been in legal trouble or both.

“We have other senior pastors and elders come into the ministry and teach the Bible so that they get a well-rounded discipleship,” he said.

A dozen men live together at a house at 217 S. Colcord Road, where they moved from a ranch they were at. And they hope to move to a three-bedroom house on a three-acre ranch across from Payson Golf Club on Aug. 20.

“We bounced around a little bit,” Tucci said. “I don’t know if you want to write this, but everybody wants a ministry like ours, but nobody wants to be their neighbors.

“So, we’ve bounced around a little bit, but God seems to be opening doors now.”

The men will work on improving the ranch they’re about to move into and then hope to move to a larger ranch in about six months, leaving the three-acre property to women, who they hope will move in there next spring.

“We’re gonna fix it up, maybe build some extra housing,” he said of the property across from PGC. “And within six months to a year we’re gonna move the men to a larger facility, and that (three-acre property) will be the women’s ranch. The women will go out and serve by cleaning houses for the elderly, they’re going to help with some of the businesses (in town).

“There’s a horse and carriage business starting with my friend Tammy Burdick. She has a store front. It’s right down the road, next to Oxbow.

“So, we’re not just helping the community, we’re also trying to get involved with other businesses around the area, with ReStore across the street, with the Humane Society (of Central Arizona). So we’re trying to partner with them rather than just say, ‘hey, we’re hear to solve all your problems.’ It’s more of a community. The Bible speaks about being one body and the body working together. So we want to see the community work together.”

The first phase of the program lasts two months, with the men and later the women in their own group, attending Bible study seven nights a week.

Following the boot camp phase, they move into the second phase.

“They can go to work and stay for six months in our second phase home, which is like a transitional home is what the world would call it, and they do some chores, attend some Bible studies.”

Men work at the thrift store. And they help members of the community.

“The Bible says, ‘thou who stole, steal no more, but work with your hands so you can be a blessing to somebody else,” Tucci said. “So what we do is from 8 in the morning until about 3 in the afternoon, we go out and serve the community. We help widows who’ve lost their husbands and can’t do their lawn maintenance anymore, or they need construction. We had a call today. Somebody needs a faucet replaced. There’s just different things we do for people in the community.”

Payson is a good place for the men to find ways to help.

“In this community, it’s not just the widows, it’s also the elderly who can’t get around as much as they used to,” he said. “They call people and they can’t get anyone to come out for two months. And even then (workers or companies) cancel appointments. Right now we’re booked about two weeks, but we try to be flexible to their needs more than our needs.”

Tucci said they need more room for the 12 men currently in the program and others who could join and contribute positively to the community.

“That’s why we’re trying to get a bigger ranch so we can take more, because there certainly is a need,” Tucci said.

Half the profits from the thrift store sales go to the men’s ranch so that they can expand and help more people. The other half is split evenly, with 25% going into an escrow account for the women’s ranch and the other 25% to help the homeless.

“There’s a need for women (who are) coming off drugs or (recently) out of jail,” he said.

And Morrissey has made helping shelter the homeless one of his key efforts.

The merchandise they sell at the thrift store was donated to them by community members thanks to help from several Rim Country churches.

“Just two weeks ago we said, ‘hey, we’re going to start a thrift store and about seven churches got together and said they wanted to help,” Tucci said.

Some donated money. Others donated merchandise from couches to just about anything you can think of for the thrift store to sell.

“So, we’re getting lots of donations,” Tucci said. “And that’s what I love because it’s the community working together.”

Tucci said helping people in the community is a key to U-Turn For Christ.

It can be challenging to field all the requests.

Tucci said the men and later women need this program.

“Discipleship id from the word discipline,” Tucci said. “The Bible says God disciplines the ones he loves. So what I like to say is the discipleship is one beggar telling another beggar where the bread is. That’s all it really is.”