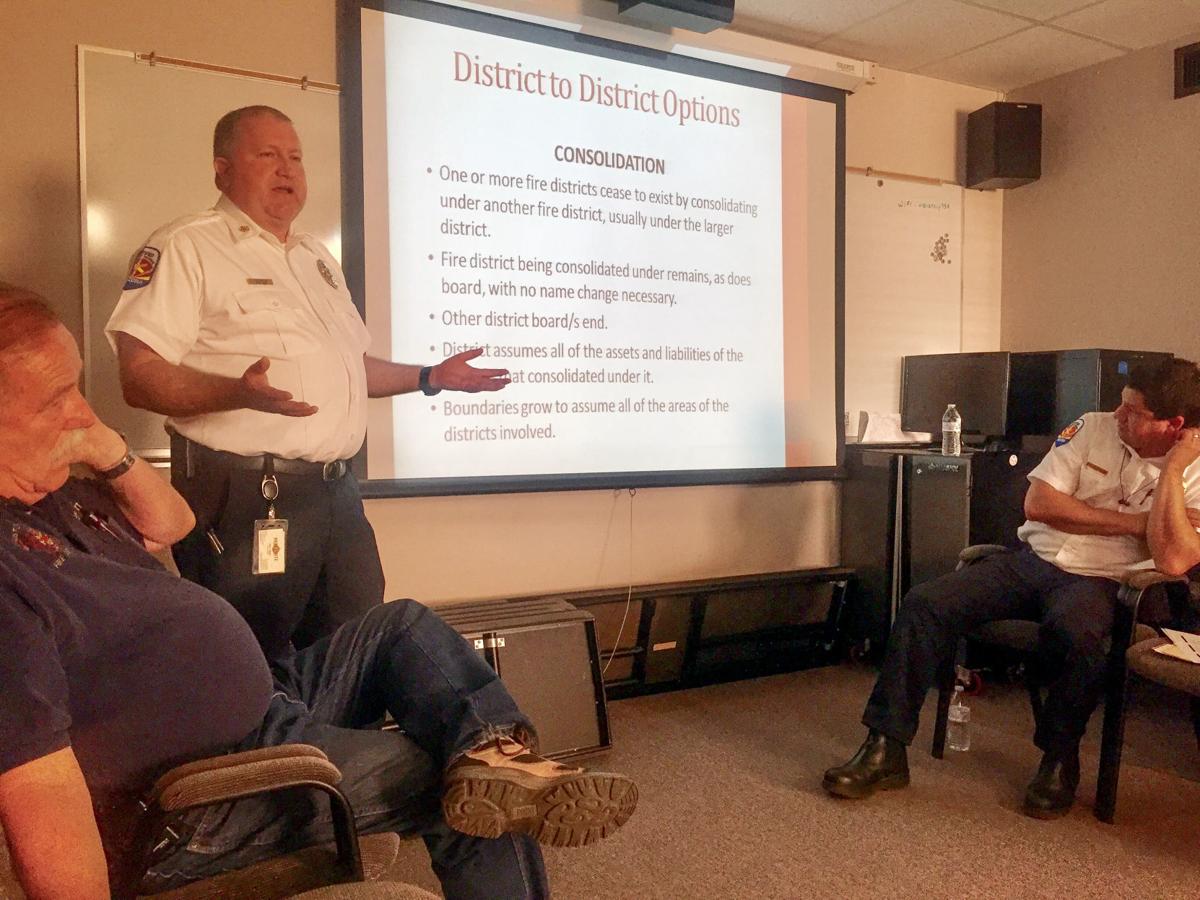 Hellsgate Fire Chief John Wisner discusses the option of working with the Payson Fire Department and Christopher Kohls Fire District under a joint powers of authority. 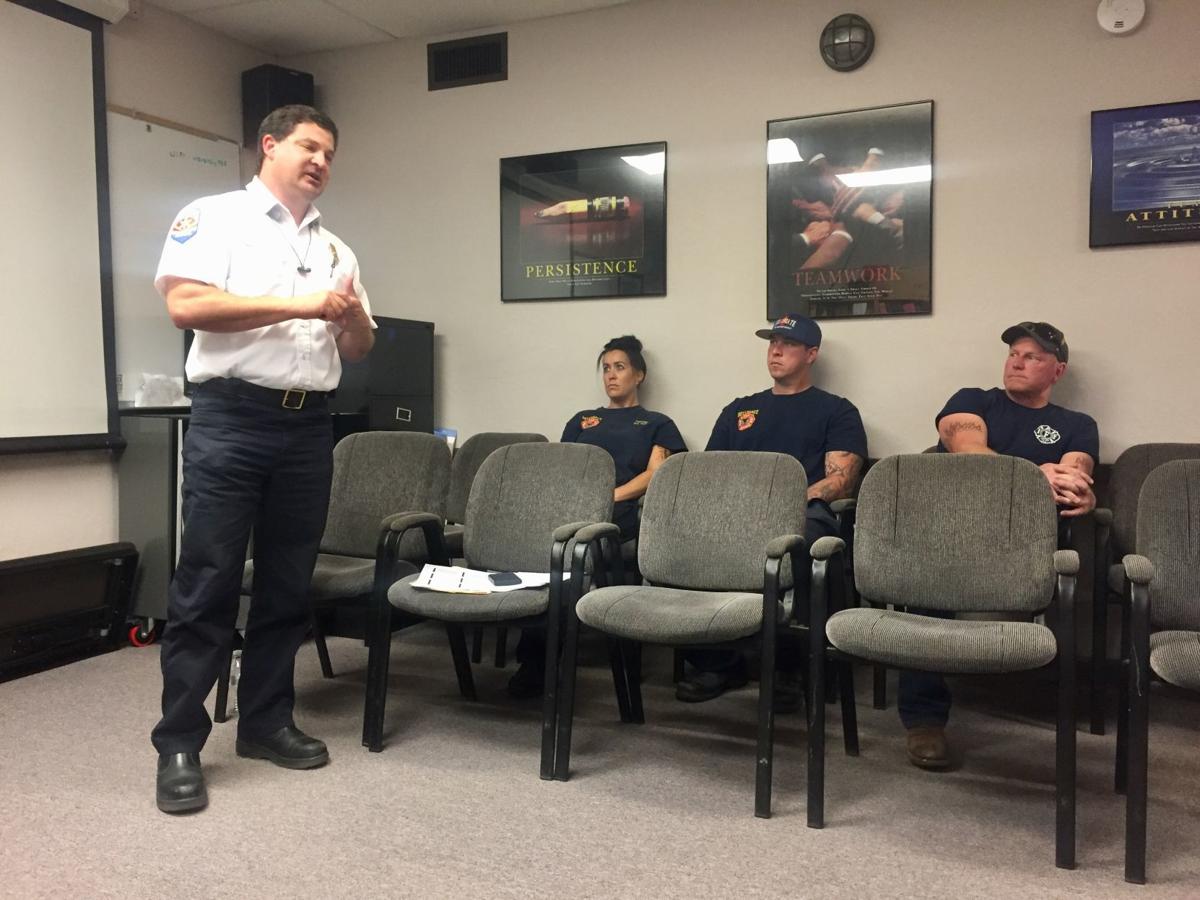 Payson Fire Chief David Staub what it would look like if Hellsgate, Payson and Christopher Kohls merged their operations Tuesday night at the Hellsgate Fire Board meeting.

Hellsgate Fire Chief John Wisner discusses the option of working with the Payson Fire Department and Christopher Kohls Fire District under a joint powers of authority.

Payson Fire Chief David Staub what it would look like if Hellsgate, Payson and Christopher Kohls merged their operations Tuesday night at the Hellsgate Fire Board meeting.

Wisner unveiled that option Tuesday night to the Hellsgate Fire Board alongside CKFD Chief Robert Lockhart and PFD Chief David Staub. Staub presented the findings to the Payson Town Council Thursday night after the Roundup’s print deadline. Read more about his presentation and the council’s response in an upcoming article.

“We utilize the same dispatch center and are dispatched to each other’s fires and major emergencies,” according to the joint operations study. “Yet, when we financially struggle, we often do so alone, not being able to take advantages of cost-saving opportunities or (to) move funding from one entity to another to ensure continued reliable services to the customers we share.”

So what can be done?

Wisner said they explored several options, including doing nothing and letting the agencies continue to operate inefficiently on their own.

But given the rising costs of benefits and Public Service Personnel Retirement System (PSPRS), limited revenues and an aging fleet of trucks, all of the agencies “struggle to provide anything other than basic services.”

The group believes participating together may mean they see a price break in benefits with a larger pool of employees.

“It is the conclusion of this study group that we owe it to the common customers and taxpayers we serve to seek out and take advantage of any opportunity to share common resources, reduce duplication of efforts, address regional issues together and improve regional emergency response capabilities.”

Wisner said they considered merging or consolidating the districts, but Payson, as a municipality, could not participate statutorily. That would mean only Hellsgate and CKFD would merge. Financially, this does not make sense. If you take out the unpredictable revenue from fighting wildland fires, both districts would go into the red. The cost savings from a merger of just those two districts wouldn’t offset the negative cash flow.

So the chiefs recommended using a joint powers authority (JPA) to merge operations, administration and budgets.

Under the JPA, the districts would form a new, separate legal entity through an intergovernmental agreement (IGA), known as the fire authority.

Assets, trucks and facilities would be transferred to the fire authority, which would also take over all administrative tasks and provide EMS services.

A fire authority board of directors would operate like a fire district board or town council. Payson, Hellsgate and CKFD would appoint members to sit on this central board. The board would hire a chief, approve budgets and expenses and set policy.

Hellsgate and CKFD would keep their existing fire boards, which would set the tax levy and perform other duties. The fire authority board would handle the majority of the decisions.

Wisner said safeguards could be set in place so the fire authority board could not shut down the Star Valley station, for example, without approval of the Hellsgate representative.

Service delivery would not change, but training and policies would be standardized.

There are drawbacks to a JPA, including a loss of department identity; some loss of local control; multiple entities required to work together and the possibility some employees would not want to transfer.

Still, the chiefs agreed it is the best option. And with Lockhart and Wisner expected to retire in the coming years, this may be the only time the three entities have leadership supporting a JPA.

The JPA, they say, is the only option that maintains or improves service and is fiscally possible without relying heavily on wildland and grant revenue.

After the chiefs present the information to their boards this month, it is expected Payson, Hellsgate and CKFD will take up the idea formally in May. If everyone is on board, they would next form a committee to draft an IGA to form a regional fire authority. They would then work to iron out the details before the IGA is finalized.

Since Hellsgate recently acquired a federally funded staffing grant extended through 2020, that IGA might not be finalized until that grant runs out so they do not lose the funding.