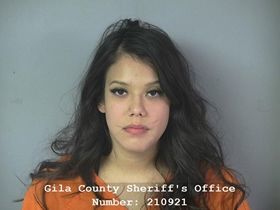 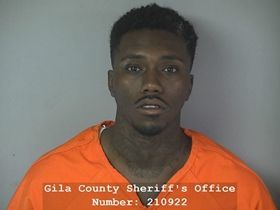 The Payson Police Department arrested a couple Saturday evening after a bizarre series of events, including an asthma attack that reportedly forced one suspect to turn himself in.

Around 7 p.m. Oct. 26, Officer Joseph Oldeschulte reportedly tried to stop a vehicle driving without its headlights on, according to a Payson arrest log.

“Upon contact, (Oldeschulte) discovered a possible ‘rolling DV (domestic violence),’” according to the release.

The driver, Aubrianna Ramirez, reportedly got out of the vehicle while the passenger, Keonte Langdon got into the driver’s seat and drove toward Oldeschulte, as if he was going to strike him with the vehicle.

Langdon then fled the scene in the vehicle. Another officer attempted to stop the vehicle. Langdon eventually struck an unattended vehicle in a neighborhood and fled on foot.

Langdon ultimately ended up at Filiberto’s, complaining of an asthma attack. Medical responded and transported him to the hospital.

Ramirez meanwhile was found to be in possession of counterfeit $20 bills, according to police.

She was arrested for forgery, driving on a suspended license and hindering prosecution as she reportedly refused to provide any information about Langdon.