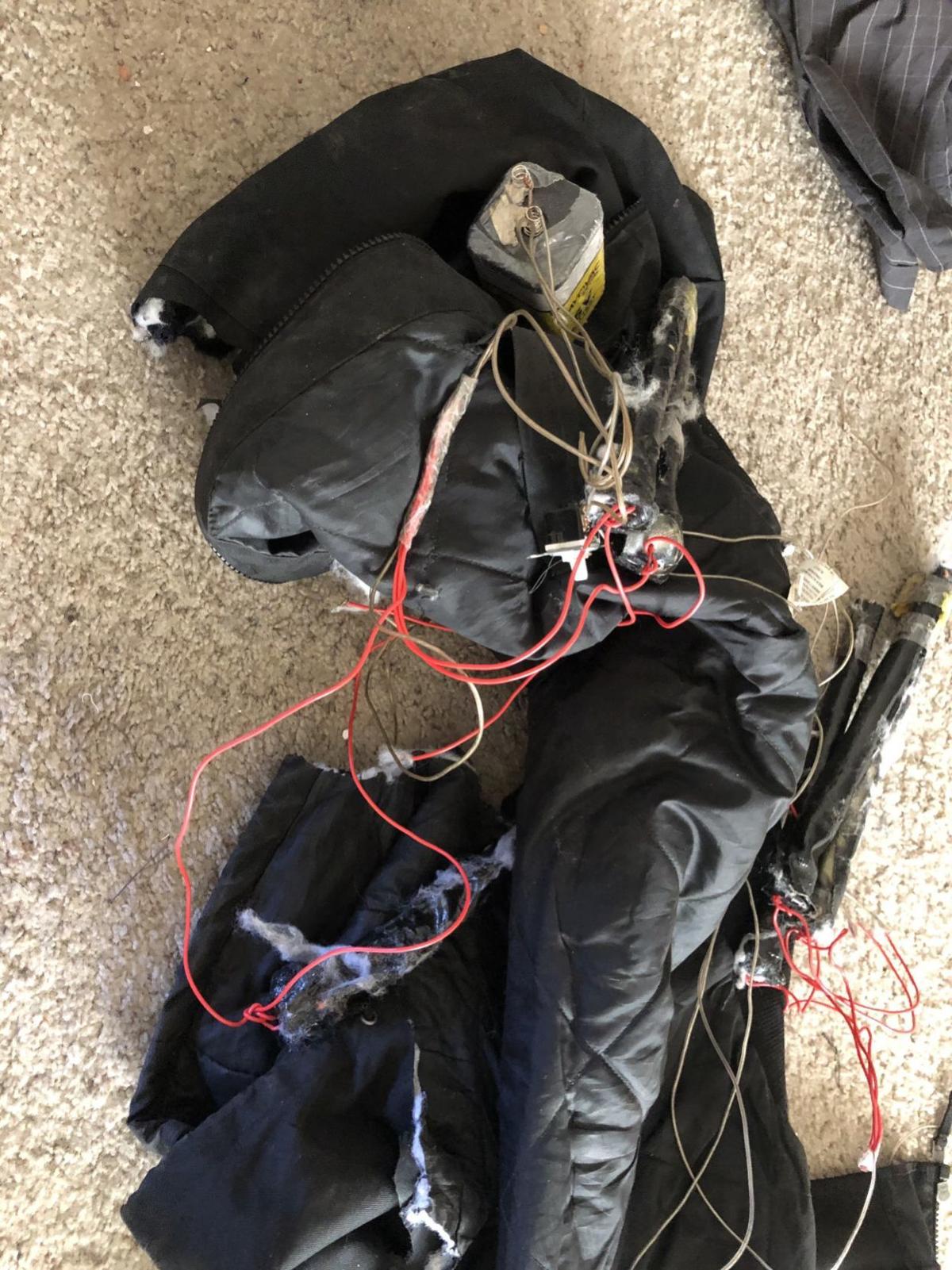 Jeffrey Munk’s jacket after Payson Police officers cut it off his body. A DPS bomb squad later determined that it was an explosive device. 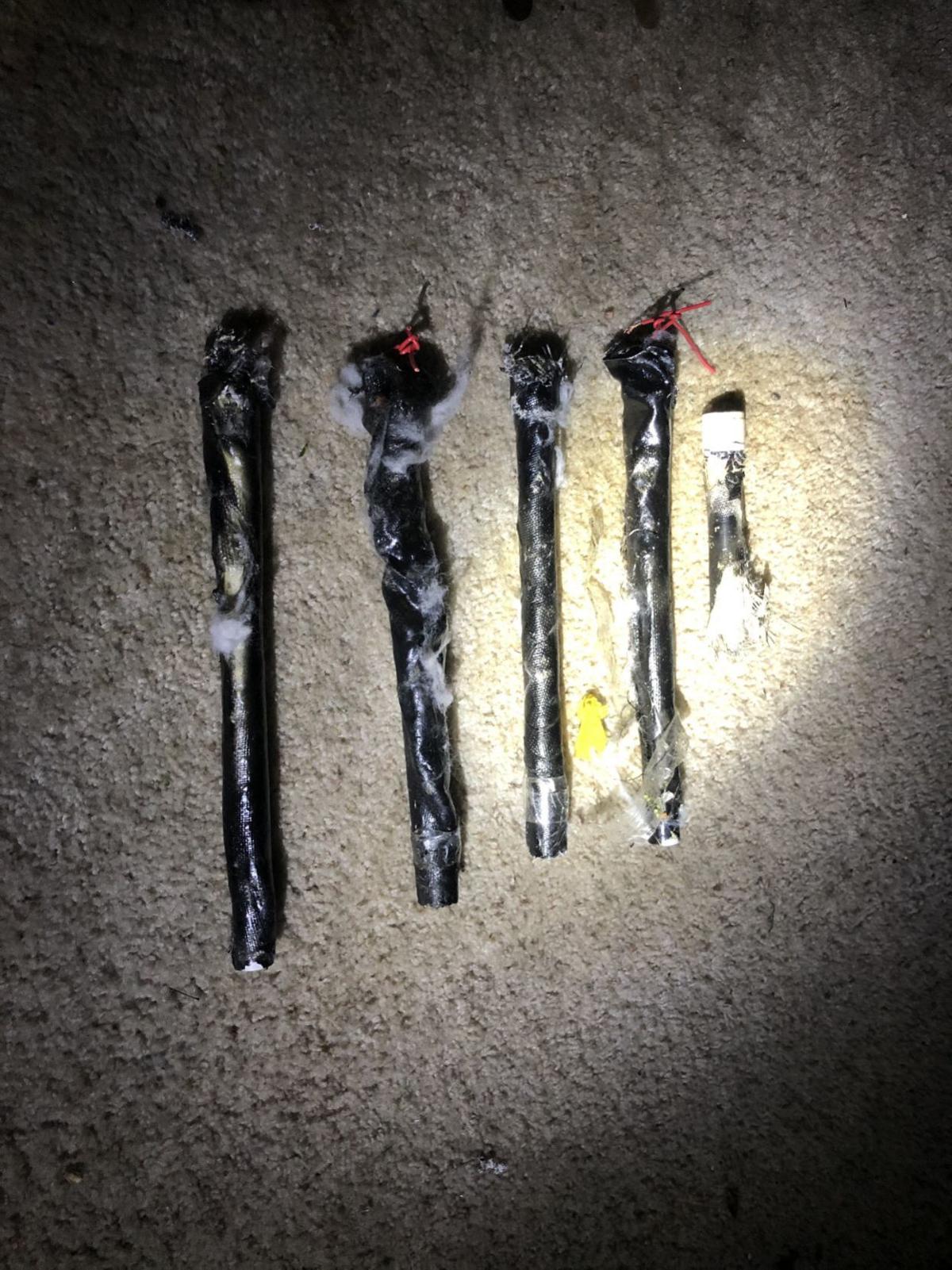 The pipes sewn inside Jeffrey Munk’s jacket. They contained material designed to explode, according to DPS bomb experts. 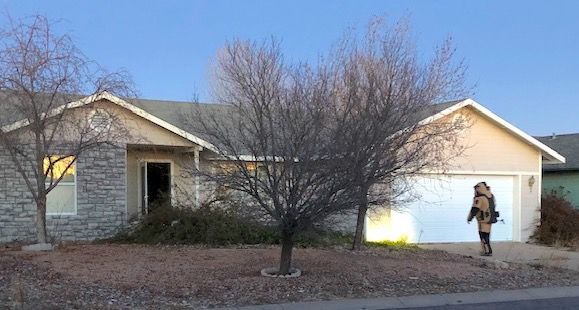 The house on West Chatham in Payson where Jeffery Munk had barricaded himself. His mother left the home to her brother, instead of Munk. Seen entering is a DPS bomb squad specialist. 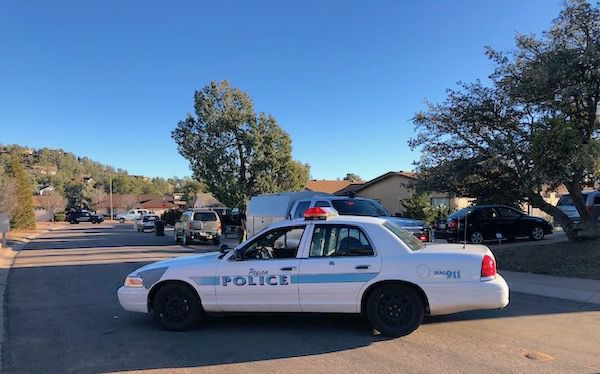 A Payson Police cruiser outside of Jeffrey Munk’s house. Nine officers from two agencies assisted with the situation. 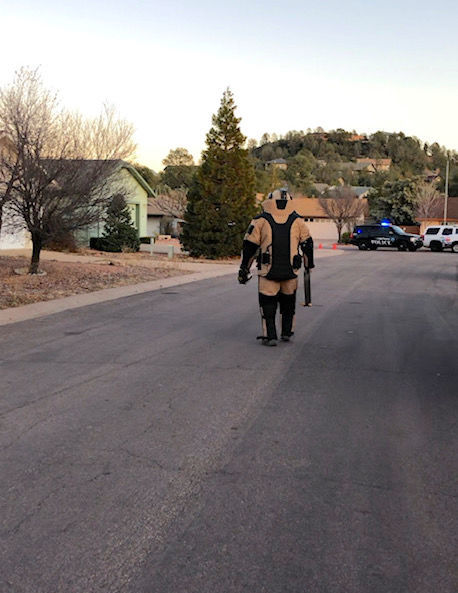 A DPS bomb specialist walks toward the home Jeffrey Munk barricaded himself inside.

Jeffrey Munk’s jacket after Payson Police officers cut it off his body. A DPS bomb squad later determined that it was an explosive device.

The pipes sewn inside Jeffrey Munk’s jacket. They contained material designed to explode, according to DPS bomb experts.

The house on West Chatham in Payson where Jeffery Munk had barricaded himself. His mother left the home to her brother, instead of Munk. Seen entering is a DPS bomb squad specialist.

A Payson Police cruiser outside of Jeffrey Munk’s house. Nine officers from two agencies assisted with the situation.

A DPS bomb specialist walks toward the home Jeffrey Munk barricaded himself inside.

Someone had barricaded themselves in a house on West Chatham Drive in Payson.

Payson Police Sgt. Matt VanCamp had a bad feeling the moment he heard the address. A little over a year earlier, he’d responded to the home to convince a deranged man to leave his dead mother’s house.

Now, officers converged on the scene.

They didn’t know they would face a man so lost in his mental illness he couldn’t tell reality from fantasy.

They didn’t know they would have to make a series of dangerous judgment calls.

They were on their own since the criminal justice system offers few services to cope with the sometimes dangerous mental illnesses that lie behind the calls law enforcement handle.

Studies suggest that perhaps a quarter of the people in jails and prisons have an underlying mental disorder. But it doesn’t much matter whether the suspect thinks he’s defending himself against aliens or cops, either scenario can produce tragedy.

The caller reported to dispatch that she couldn’t get into her uncle’s house because someone had nailed the doors shut. A man inside had yelled at her to go away, insisting he was a police officer.

Officers arrived and set up around the house. VanCamp knew the house well. Some 18 months earlier, he’d talked Jeffrey Munk into leaving the house in which he’d been illegally living since his mother died. Officers did not know what awaited them inside.

The “suspicious incident” call had come out at 10:45 a.m. The caller said someone was in the home, which had been empty for four years. The caller was preparing the home for an estate sale, but her key wouldn’t work. She said her uncle had the only other set of keys. She went around back, where she heard a man inside yelling. He said he was a police officer and he owned the house. She called 911.

Soon, a Gila County Sheriff’s Office deputy and eight Payson Police officers surrounded the house. For 90 minutes, they called for the man inside to come out — but he ignored their commands.

Officers broke into the back of the house so they could contact the man, now identified as Munk.

VanCamp had Officer Jared Meredith beat down the door while he provided cover. Det. Michael Varga would then negotiate, while three PPD officers provided cover.

Meredith rammed the door once, shattering a center piece of glass.

Meredith rammed the door again. The thick wooden door covered in metal didn’t budge. So, Meredith removed the shards and raised the shade.

Munk stood across the room, in the hallway’s shadow.

Meredith ordered him to put his hands up and move forward slowly.

Once Munk was three feet away from officers, they entered the house by squeezing through the broken center window in the door. They used the bulletproof shield for cover until VanCamp and Meredith could grab Munk’s arms. They pressed him against the wall, Meredith on Munk’s left, VanCamp, the right.

Meredith cuffed Munk and noticed wires and PVC pipe running up and out of Munk’s jacket sleeves.

“What have you got there?” asked Meredith.

“What do you mean 12-gauge?” asked Meredith.

VanCamp and Meredith kept hold of Munk’s arms while another officer cut away his jacket. Soon, they found rows of pipes wrapped in tape, connected by a network of red wires. It looked like a bomb. The officer kept cutting until the jacket was in shambles on the floor.

Munk offered no resistance as they loaded him into a squad car. He would face charges of criminal trespass, unlawful depositing of explosives, and prohibited possessor possessing a weapon.

VanCamp took a picture of the jacket and the PVC pipes to send to a Department of Public Safety bomb unit, hoping it was just a fake bomber vest.

Alas, their instincts proved unerring. After seeing VanCamp’s pictures, DPS sent up a bomb technician the next day. The bomb technician said the pipes were filled with explosives, primed to go off. In fact, the expert discovered Munk had built another device — which had exploded in a bedroom of the house, embedding shotgun pellets in the walls.

It is unclear if Munk tried to detonate the jacket.

Payson Police Chief Ron Tischer said officers made the right call every step of the way. They removed the jacket because they “were afraid if they let go of him he would activate the switch and blow everyone up.”

How did it get so bad?

The incident underscores the lack of options for officers confronted with unpredictable suspects.

Munk had reportedly been struggling since his mother died. The system had not intervened until things came to a climax in the room of a barricaded house.

The police reports have redacted Munk’s diagnosis, but note that Munk’s family knew he had a diagnosed mental illness. His niece, who made the 911 call, told officers Munk “talks with aliens.” She said he had at one point wired the house with antennas so he could talk to the aliens.

He was reportedly never charged or treated in connection with a 2015 trespassing call at a Main Street property, according to court records.

In 2016 he’d got locked up in a Navajo County jail, where he assaulted a prison guard.

By 2018, Munk had returned to Gila County, when VanCamp and other officers arrested him for trespassing at the West Chatham address. Munk, “was attempting to pull a gun out of his waistband and he was almost shot by officers,” wrote VanCamp.

The lack of a system to cope with the mentally ill can cast officers into dangerous and unpredictable situations. Yet studies show most people suffering from mental illness are far more likely to become victims of crime than to commit a crime. Munk’s case is extreme.

One study published in World Psychiatry concluded there’s a consistent link between mental illness and violence, although substance abuse is linked to violent behavior — especially when combined with mental illness.

Some people with mental illnesses without access to treatment can become more and more unpredictable.

The PPD has recently provided officers mental health training. The Roundup will do a future article on what they have learned.

Research shows that police spend a lot of time dealing with how the mentally ill may act out, including trespassing or disturbing the peace. Often, they have no choice but to put the person in jail — where their condition may grow worse. Because the underlying cause of the problem, mental illness, has not been addressed, law enforcement ends up seeing the person again.

Solutions in the works

Just last year, the Justice Center for the Council of State Governments published a playbook for law enforcement and mental health providers.

Participants in restorative court must stick to the counseling and medication regime. If Munk had taken part, things might have gone differently.

“Then restorative court might have helped address the mental health issues that led to his law enforcement contacts, i.e., trespassing,” said Bystricky of the case.

Both Little and Bystricky have already had to return two restorative court participants to the regular system because they could not get adequate treatment for mental health issues in Payson.

In the meantime, officers continue to face dangerous and unpredictable confrontations.

According to neighbors’ accounts, the house belonged to Munk’s mother before she died four years ago. It had been empty ever since. Instead of leaving the house to her son, she left the house to her brother from New Mexico.

Research has found stressful life events, such as losing a close family member, can throw the mentally ill into crisis.

Little suspects Munk’s mother served as a guardian or caretaker, keeping his mental illness from spiraling out of control.

“This is probably where we need to help the mentally ill the most, many parents, some elderly, are caretakers if there isn’t a contingency plan for death or sickness — what happens to these people? Many need someone to remind them to take medicine and make sure they are following their treatment plan,” she said.

The police reports on the Munk explosives case.

Aggravated assault on a correctional employee

Weapons possession by a prohibited person