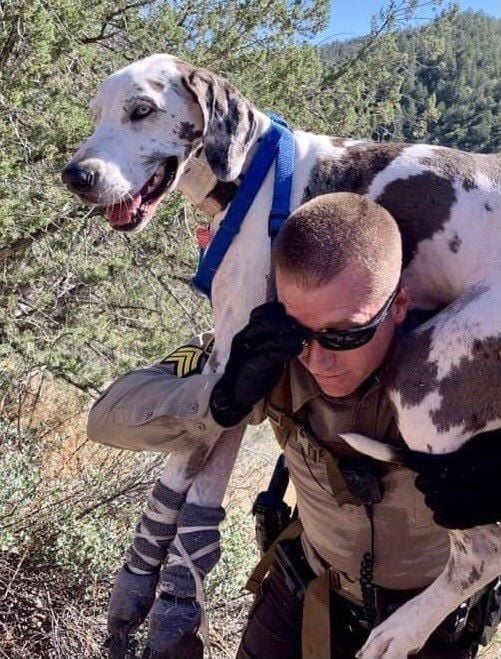 Gila County Sheriff’s Office Sgt. Matt Binney in September 2019 carrying a 90-pound Great Dane out of the Hellsgate Wilderness after the dog had worn pads off her paws while accompanying her owner on a backpacking trip. 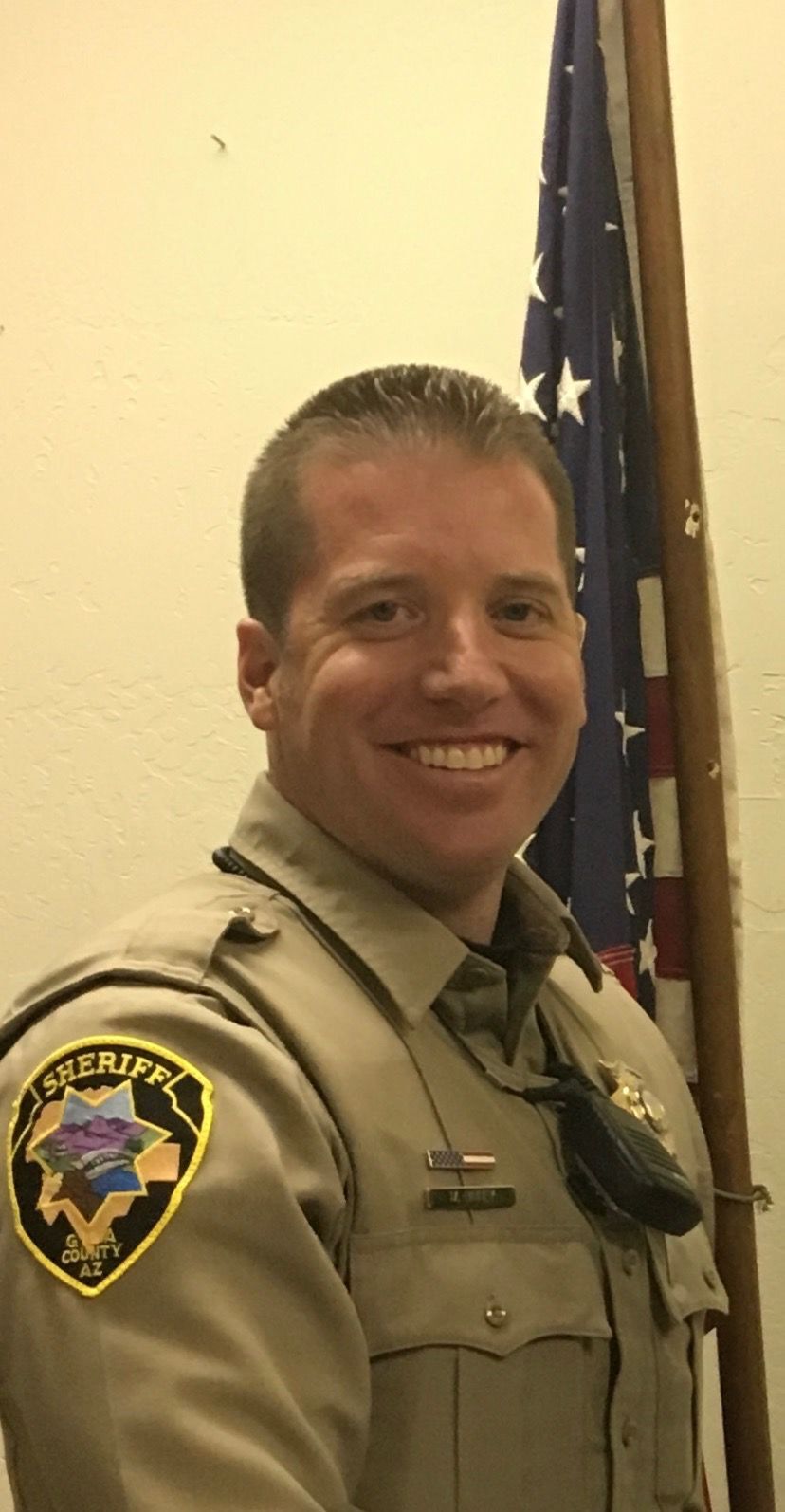 Gila County Sheriff’s Office Sgt. Matt Binney in September 2019 carrying a 90-pound Great Dane out of the Hellsgate Wilderness after the dog had worn pads off her paws while accompanying her owner on a backpacking trip.

He returned to Payson with his family in 2013 and joined the nursing staff at Payson Regional Medical Center, now Banner Payson Medical Center.

One boyhood dream had been a career in law enforcement. In 2015, when he inquired about putting his medical training and skills to work for the Gila County Sheriff’s Office, he was persuaded instead to begin the journey to become a deputy sheriff.

His medical experience and license as a registered nurse didn’t go to waste as he is often found assisting the Jail Medical Unit as well as other deputies and fellow agencies with phlebotomies for their DUI investigations.

He was promoted quickly to the rank of sergeant in 2018. As sergeant, Binney took on many additional roles — these included serving as the northern district field training supervisor as well as a northern district search and rescue coordinator.

This month he and his wife and three boys get to celebrate a Christmas gift the entire family can take pride in: dad’s promotion to the high-ranking position of undersheriff.

“Eight years of military service — during which Matt was awarded the Silver Star, Bronze Star and Purple Heart, his pursuit of higher education, and what he has accomplished in just over five years in law enforcement — with all this Matt has proven he has the experience, education and leadership for his new role in our command staff,” said Gila County Sheriff Adam Shepherd.

The undersheriff serves as third in command of the sheriff’s office; is directly in charge of the Patrol Bureau and oversees patrol activity throughout the unincorporated areas of Gila County, enforcing laws and preventing crime. Divisions he will oversee include Patrol, K-9 Units, Lake Patrol, 911 Communications, School Resource Officers (SRO) and Volunteer Programs.

“From the moment Sgt. Binney began his career with the sheriff’s office his exemplary leadership skills were evident,” said Shepherd.

“He has either participated in or started from scratch several advanced projects for Gila County, as well as the sheriff’s office. I have rarely seen someone with his ability to identify and tackle important issues with the thoroughness that he brings to the table. His methods of analyzing problems, developing realistic solutions and working with stakeholders to see it through is astonishing. Matt has made it his mission to serve his whole life and he continues that mission serving the citizens of Gila County with a high level of integrity; and he demands the same from those working with him. He will be a welcome addition to our command staff and truly an asset to the county for years to come.”

Lt. Tim Scott added, “From his time in the academy where he received the Exemplary Recruit Award, I knew I was getting a good trooper. His leadership and decision-making skills are always on point and every assignment he completes with professionalism and dedication. He cares about the citizens and the communities we serve. He will do great as the undersheriff and I am looking forward to the future of the organization. The sheriff made the right decision and the citizens will benefit for years to come. The Gila County Sheriff’s Office was fortunate to hire a guy with his background.”

Shepherd, Scott and others who work closely with Binney said more than once that the decorated serviceman would be the last one to boast about his military service. But it’s a story well worth hearing: right here in Gila County, a bonafide military hero, and one who came back to continue serving his community. Shortly after graduation from Payson High School in 1999, he enlisted in the United States Army serving as a UH-60 Blackhawk Helicopter crew chief. After the tragic events of Sept. 11, 2001, he was selected to join the elite Special Forces, graduating in 2004 and earning his Green Beret — and assigned to the 7th Special Forces Group.

Military service took him around the world, with tours of duty in perilous places. During what proved to be his last deployment to Afghanistan in 2006, he was wounded in action by gunshots to the head and shoulder. The severe injuries sustained from that day ended his eight-year Army career with a medical retirement — and with heroism that brought the Silver Star, Bronze Star and Purple Heart awards. A detailed article in the Military Times says: “Sergeant Binney’s heroic actions, despite two serious wounds, defeated a Taliban attack, saved the lives of his comrades, and prevented the destruction of his team. His actions are in keeping with the highest traditions of military heroism.”

Take some time to read the complete story at valor.militarytimes.com/hero/3821.

“Eight years of military service – during which Matt was awarded the Silver Star, Bronze Star and Purple Heart; his pursuit of higher education, and what he has accomplished in just over five years in law enforcement – with all this Matt has proven he has the experience, education and leadership for his new role in our command staff.”