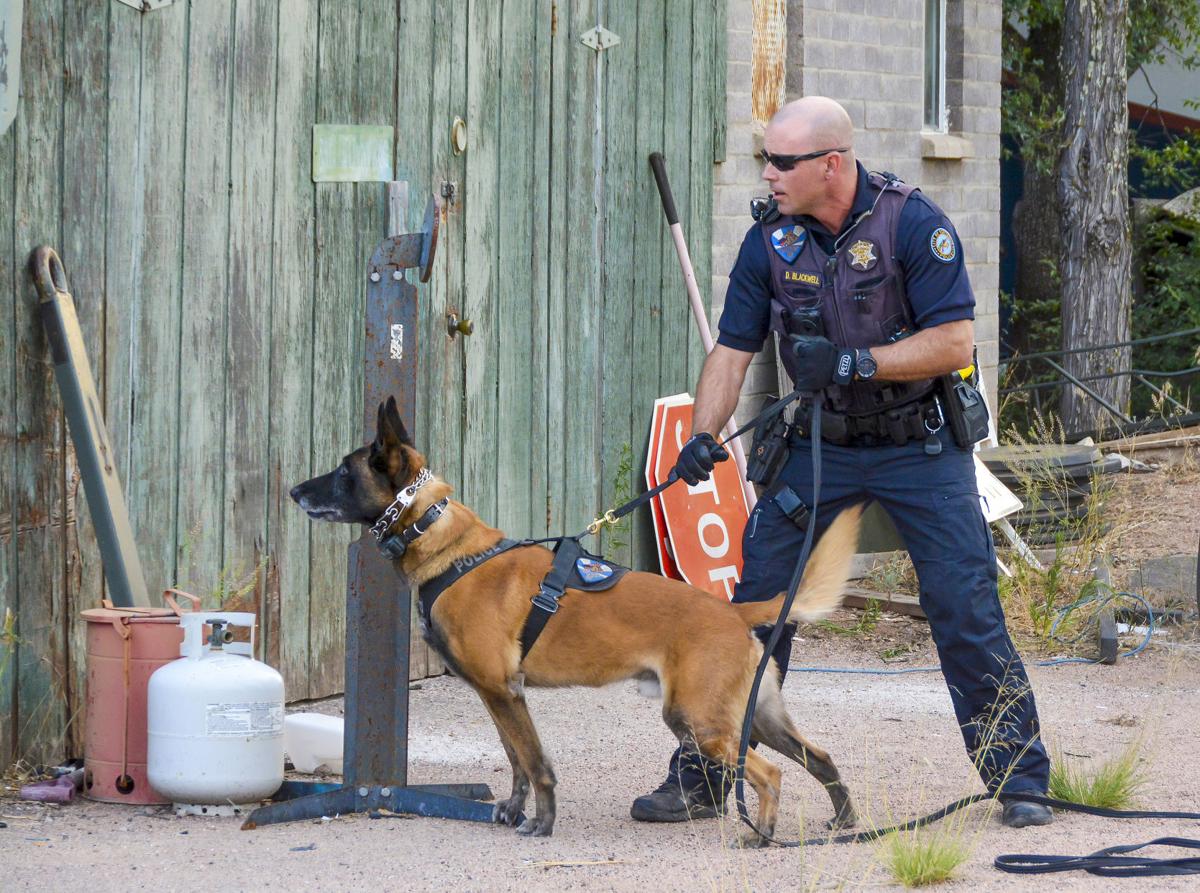 A Scottsdale K-9 officer and his dog participate in a training scenario where a suspect hides in a dumpster. Besides honing their search skills, dogs also got to bite “attackers” during the annual training event. 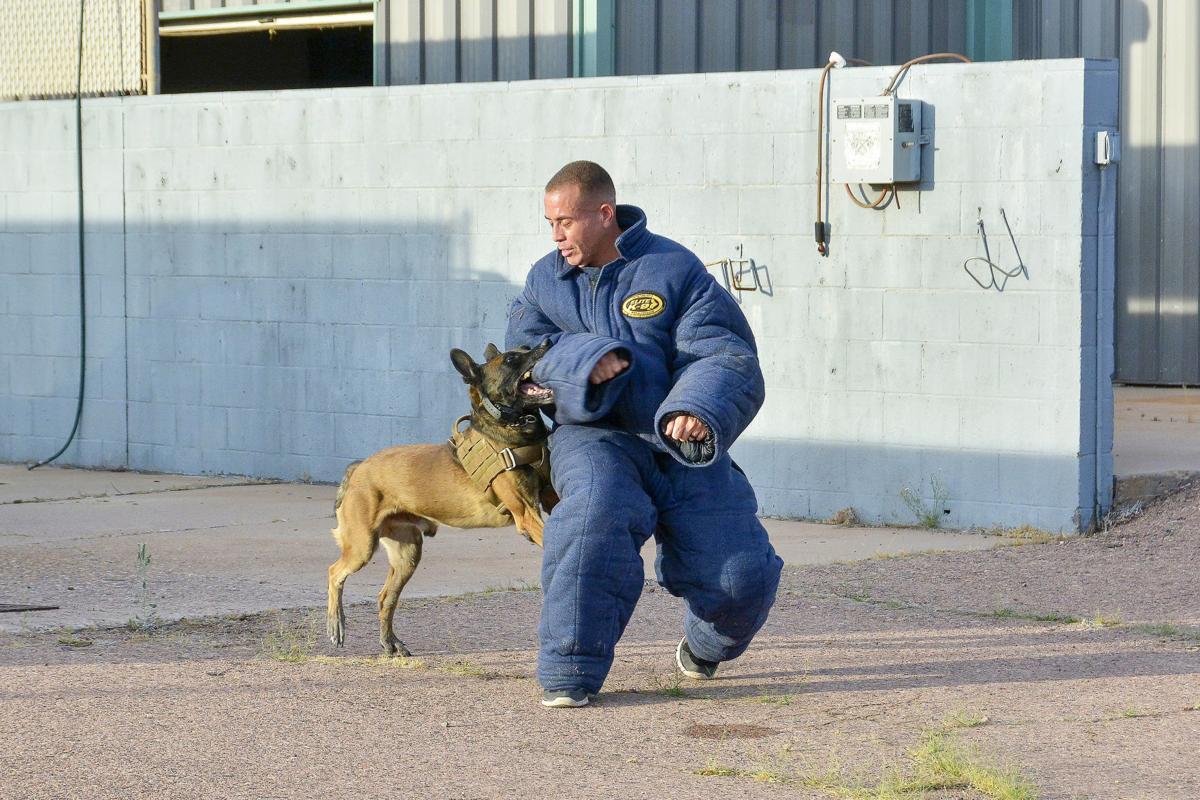 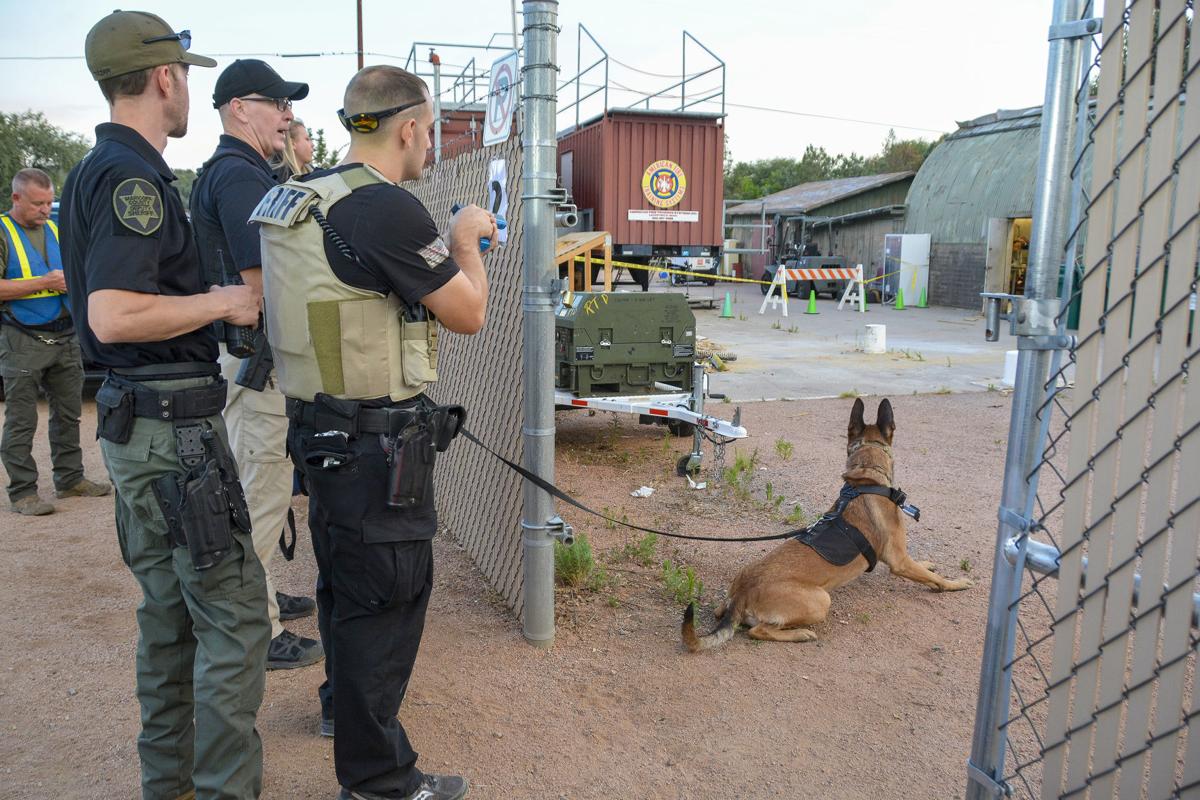 Officers prepare to enter the town yard near Green Valley Park to locate a suspect during a training seminar. 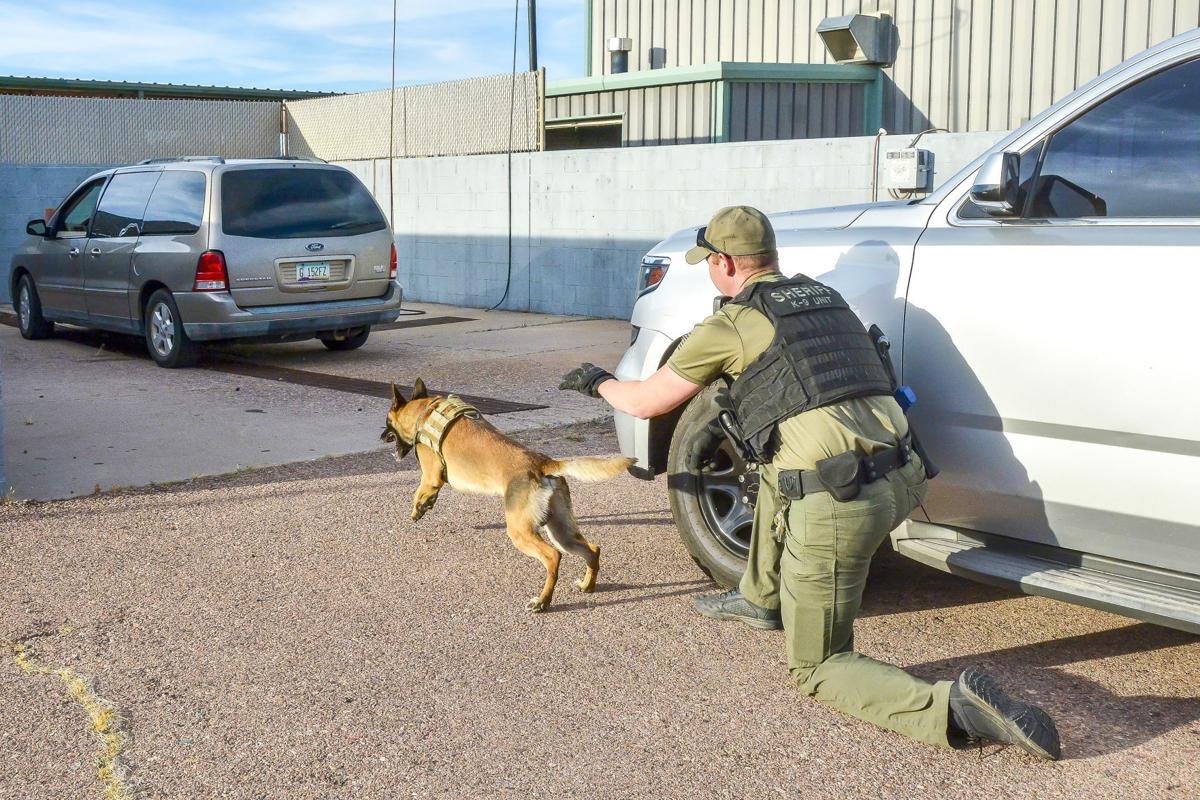 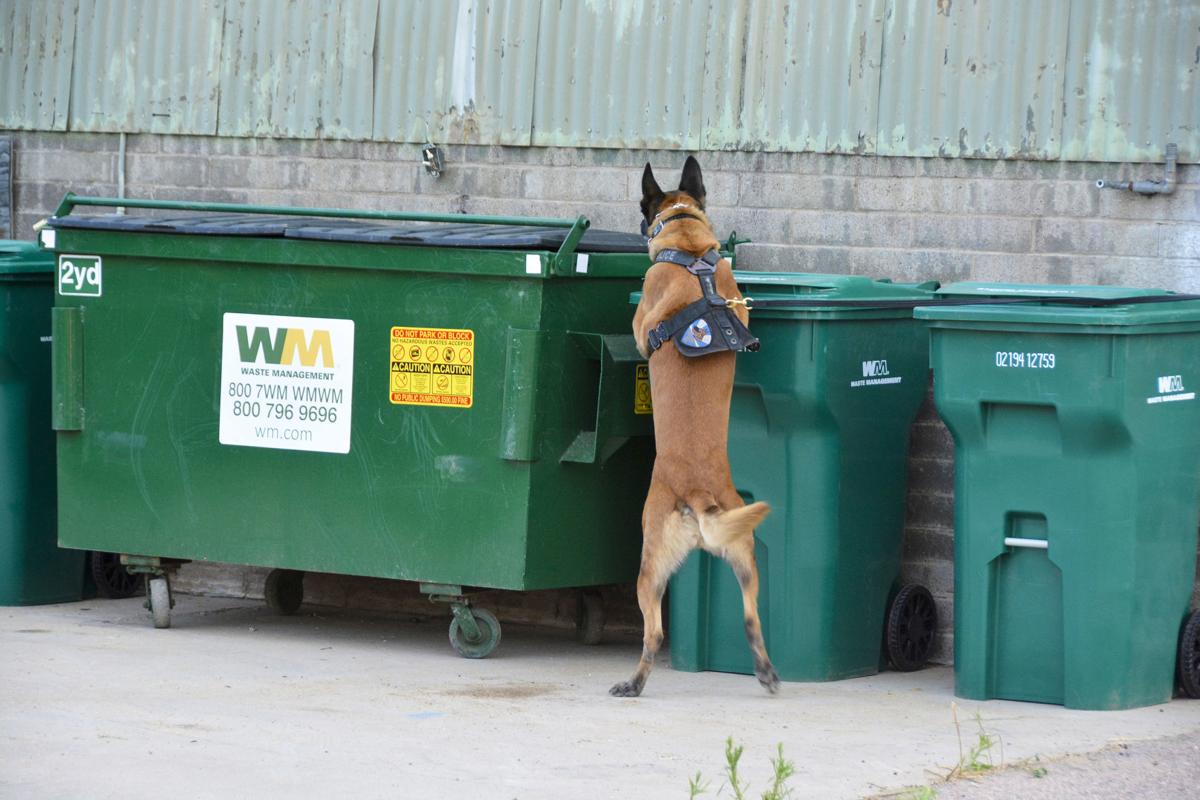 A K-9 officer locates a suspect hiding in a dumpster. 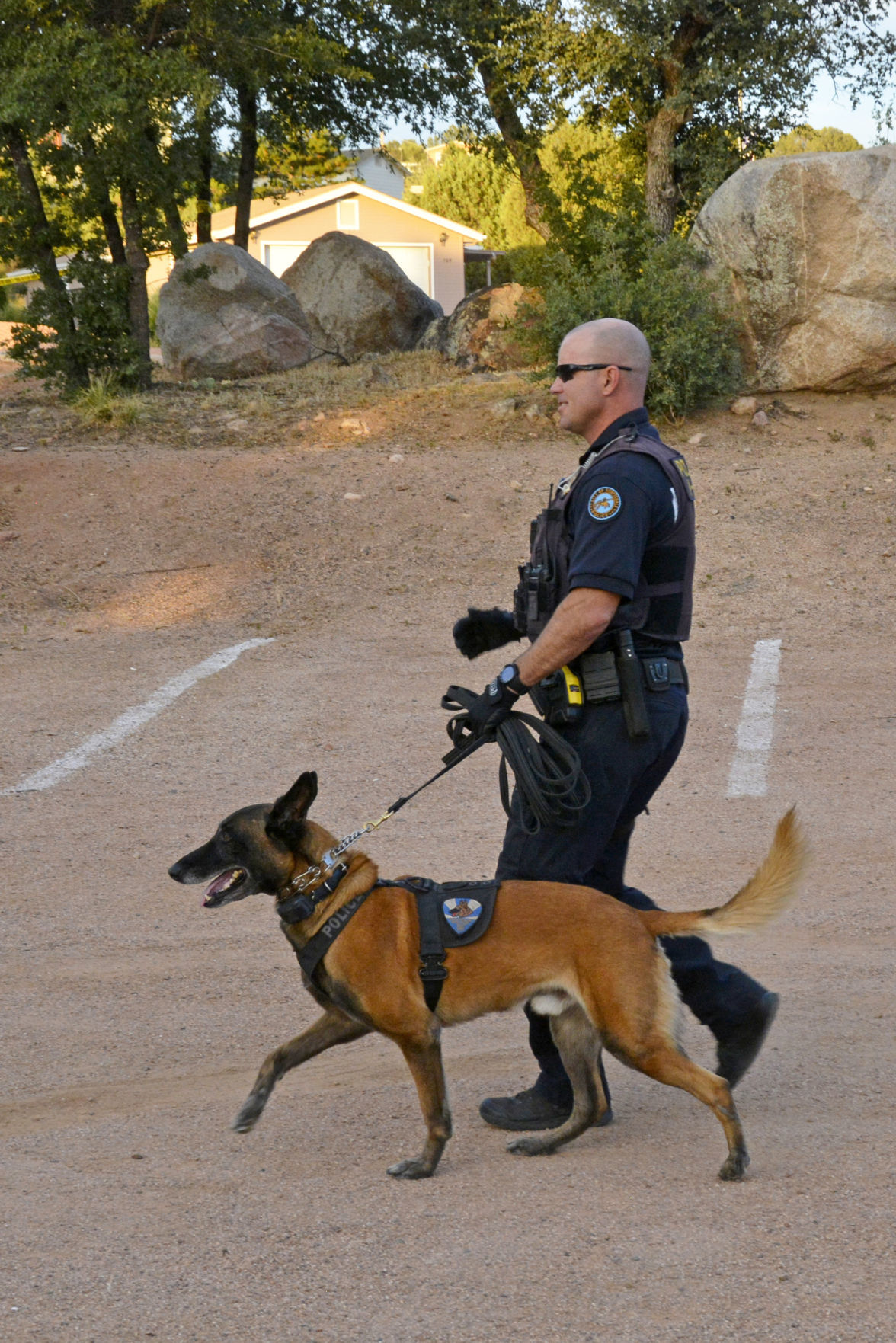 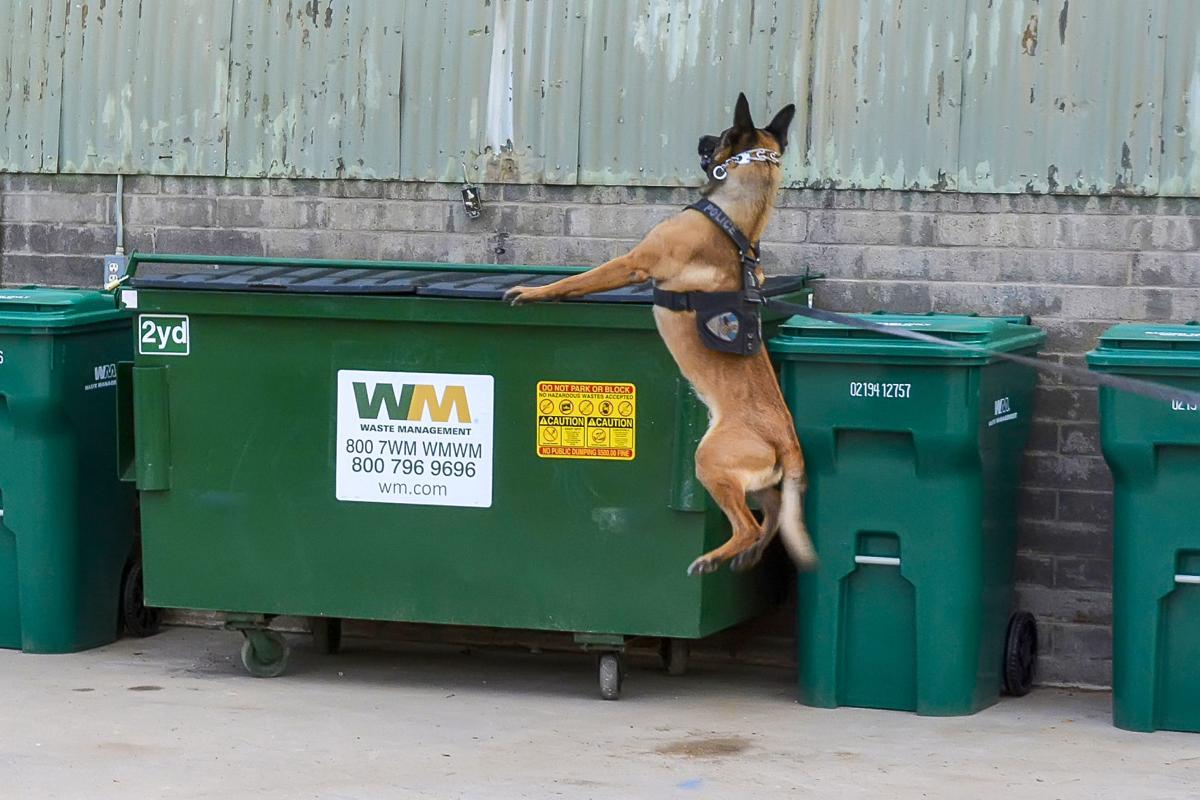 A Scottsdale K-9 officer and his dog participate in a training scenario where a suspect hides in a dumpster. Besides honing their search skills, dogs also got to bite “attackers” during the annual training event.

Officers prepare to enter the town yard near Green Valley Park to locate a suspect during a training seminar.

A K-9 officer locates a suspect hiding in a dumpster.

If you’re ever in a situation where officers tell you to surrender or they’ll release a K-9, just surrender.

You only had to watch one training session to see there is no way to run or hide from these dogs, whose power and skill was on display during the 27th Annual K-9 Handler Survival Seminar last week.

“The pounds per square inch is like having four refrigerators stacked on top of your arm,” said Rod Mamero, spokesperson with the Arizona Law Enforcement Canine Association (ALECA) and retired Payson Police Department sergeant. “There’s a lot of pressure there. When the dogs bite a suspect, they bite and hold.”

Mamero worked under Police Chief Dave Wilson and was there the day a man shot and killed Wilson during a welfare check.

Around 70 K-9 law enforcement teams from around the state came to Payson July 15-18 for the seminar. It included certification tests, meetings, speakers and a public K-9 demonstration that was held at the Payson Event Center on July 16.

“The demo went well,” said Mamero, “there was a really enthusiastic crowd. We had a good time.”

ALECA holds training and seminars around the state.

“ALECA is the greatest organization I’ve ever been a part of,” said Mamero. “It’s the best thing I’ve done in law enforcement. A lot of us deal with canine agencies in other states, and they’re all good in their own right, but what we have going here is something special.”

Mamero said the organization was started 27 years ago to connect K-9 agencies from around the state, build a network and develop a unified training system so K-9 officers from different areas and disciplines can work together.

On Wednesday and Thursday, officers went through numerous training scenarios designed to be as realistic as possible.

Organizers did not tell participants ahead of time what to expect. They were organized into teams of eight or nine from different agencies and rotated through scenarios.

While waiting, officers talked with each other about deployments, past searches, things they’ve learned, where they’ve found drugs and techniques used.

In one training scenario, a suspect (an officer, dressed in protective gear) hid in a parked minivan. Each K-9 team approached and the officer shouted to the suspect to surrender or the K-9 would be released.

When the suspect did not surrender, the officer released their dog. Most dogs ran to the vehicle and jumped through an open window to flush out the suspect.

“The conventional training today,” said Mamero, “is that once you get a suspect bit and held, you give the officers a chance to go in. We’ve given the guy a chance to give up (before the bite) several times usually, and once the dog has him, to call the dog off and have him start running again or go for a weapon, then you’re going to have to re-bite him and cause more injury. The idea is to bite and hold him until the officers can get up and get him secured.

“The ideal deployment is to bring the dog out and the sheer deterrence of having the dog makes the bad buy give up,” Mamero added. “Nobody gets hurt, everybody is safe.”

Tempe Sgt. Anthony “Tony” Miller has been a handler for four years. His K-9 partner is Roko. Roko has a titanium tooth to replace one he broke in a deployment.

“I’ve come to this seminar every year,” he said, “it’s good. You go to other states, nobody does this. We’d be in the top three in the country for how we do things.

“My dog does explosive ordinance disposal (EOD) too,” Miller said. “We had to go to Phoenix Children’s Hospital for a bomb scare and every single person there I knew — from this (seminar) — it’s a community.

“We’re not techs, there are people certified through the FBI to dismantle or engage a device,” added Miller, “our job is to do the detection work. When Vice President (Mike) Pence came we did a sweep for him. We do the ASU football games. We’ve trained with the Department of Public Safety (DPS) where we get into the helicopter with the dogs because if we had a mass attack — a bombing in Payson or a bombing in Flagstaff — there are no bomb dogs in Flagstaff so we’d be jumping on the helicopter and going up there. There are a lot of things we practice.”

In the Valley, it can get so hot that they have to switch dogs out every five minutes. For this reason, sometimes even having 10 dogs at a scene is not enough.

“The sergeant can make one phone call if he needs a bunch of EOD dogs or someone else is working on a case with narcotics interdiction,” said Mamero. “One phone call to another ALECA member and before you know it we have all the dogs we need for everything.”

Mamero said they used to start training dogs at 16 months, now they start testing dogs for temperament as early as six to eight weeks.

They test their prey drive, their hunt drive, how they stick with it and, very importantly, their play drive. When the dogs are working their tails will wag because they love what they do.

“We need dogs that are in control, that are controllable, but that also have the heart to go out and do the job,” said Mamero. “K-9 teams have made a comeback, especially in the post 9/11 world. People are realizing their value as a less-than-lethal option.

“These dogs will work through gas, it’s amazing. We test them and stress them around water and canals, tear gas, all that stuff and the dogs work through it,” said Mamero. “They may not be happy about it, I know the handlers aren’t, but that’s part of it because there are going to be times when you’re going to deploy gas and you have to know your dog is going to be able to overcome that. “

When Mamero started working with the dogs in 1993, the German shepherd was the primary breed. Since then more widely used breeds include the Belgian malinois and Dutch shepherd.

“All of us love dogs, but traditionally shepherds have more health problems, including spinal issues and hip dysplasia,” Mamero said. “The Dutchies and malinois are a little more robust.”

ALECA does not tell people where to get their dogs, how much to pay, or who to use as their trainer. Some agencies use local vendors, some go to California, others fly to Holland.

Police dogs can work until about nine or 10 years of age unless they have injuries. Typically, the handler is given the first right of refusal to buy the dog when it retires. They have to pay, but the agreed-upon price is $1.

If the handler does not take the dog, it is given to another officer in the department.

ALECA is a nonprofit organization that receives no government funding.

“Any monies we get to help pay for this seminar, equipment and training is through sales of our merchandise or donations,” he said. “For anything to run 27 years like this, that’s a testimonial to how effective it is and the support we have and how good the training is.

“I really think we are ahead of the curve when it comes to training and how we do things in Arizona. Arizona should be proud.”

Some 25 years ago, before Mamero retired, a special needs child walked away from his home in Rye in the winter.

“I made one phone call to a Department of Corrections friend of mine, an ALECA member, and within 30 minutes I got a call back saying ‘You’ve got four bloodhounds from around the state coming your way to help look for the kid.’

“That’s the strength of our organization,” he said. “The agencies know their agents are a part of this — their supervisors know — they know what we do and what we’re about so it eliminates a lot of red tape. There are agencies helping other agencies all the time. It’s a daily thing in the Valley when someone needs an extra dog or someone’s got something really big going on.”