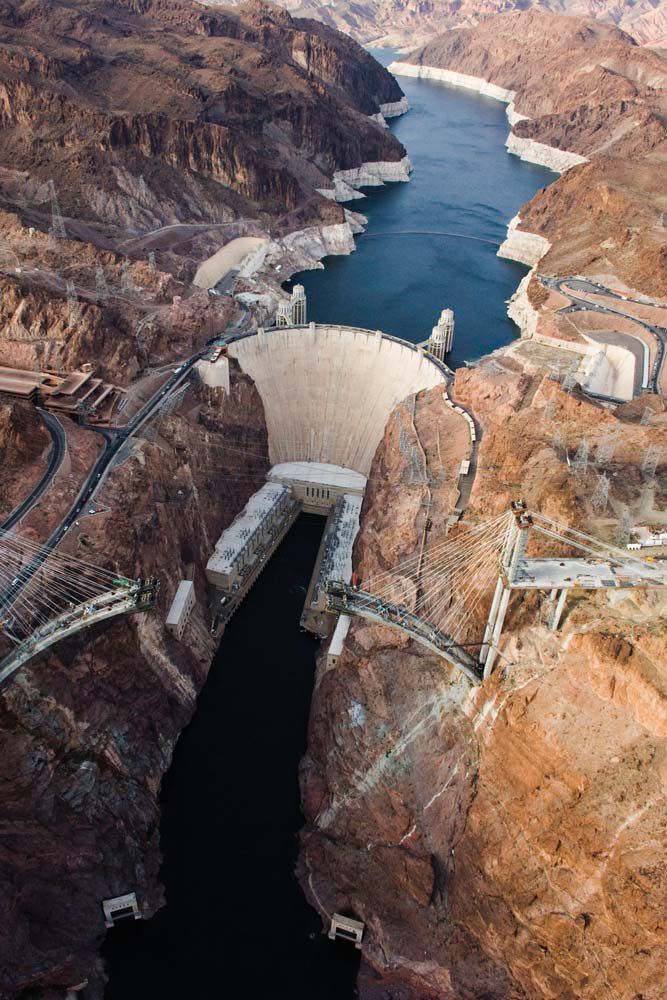 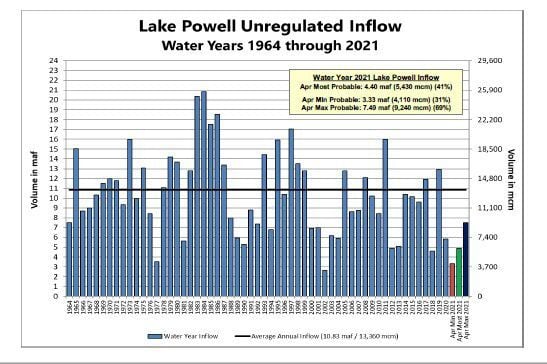 The average flow of the Colorado River has declined steadily in the last 20 years. 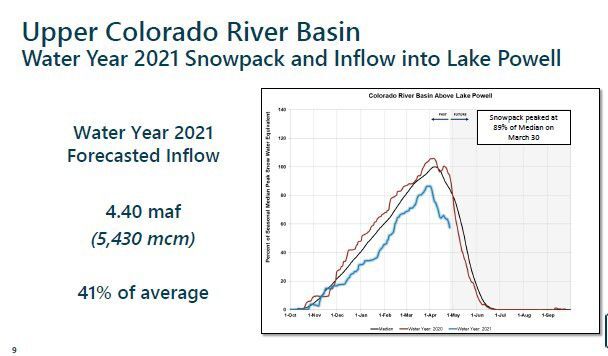 The snow pack on the Colorado River his year averaged 71% of normal, setting up water rationing for Arizona. 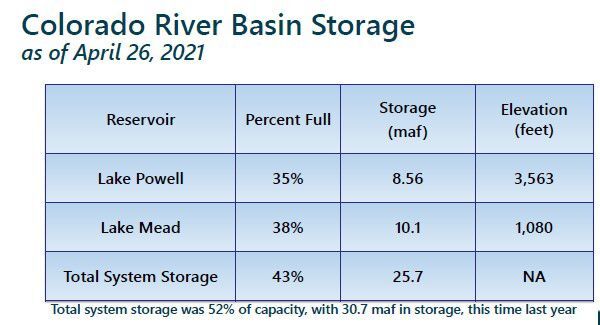 Rising temperatures, a meager snowpack and a hot dry spring have driven total water storage on Colorado River reservoirs to 43% of normal, triggering rationing. Arizona gets 36% of its water from the Colorado River. 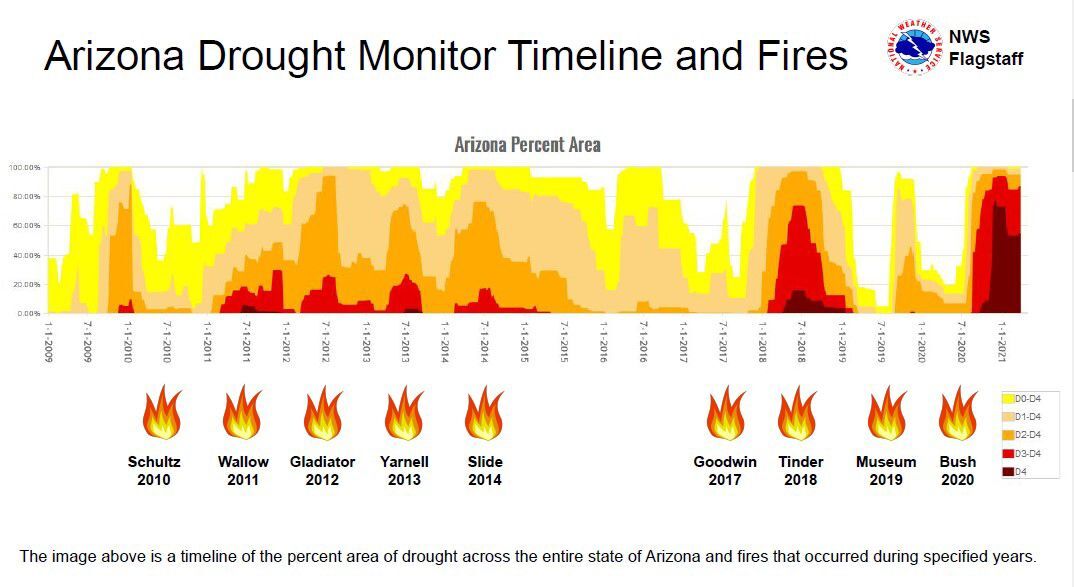 This graph shows the close relationship between drought conditions and major wildfires. The chart shows that a larger percentage of the state is in extreme or exceptional drought right now than at the same time of year before any of the worst wildfire seasons in the past 20 years.

The average flow of the Colorado River has declined steadily in the last 20 years.

The snow pack on the Colorado River his year averaged 71% of normal, setting up water rationing for Arizona.

Rising temperatures, a meager snowpack and a hot dry spring have driven total water storage on Colorado River reservoirs to 43% of normal, triggering rationing. Arizona gets 36% of its water from the Colorado River.

The U.S. Bureau of Reclamation last week warned water users to brace for a 500,000 acre-foot cut in water from the Colorado River as a historic drought continues to tighten its grip on the Southwest.

The cutback comes on top of a 200,000 acre-foot reduction Arizona water users agreed to last year to put off this day of reckoning. The Central Arizona Project provides more than a third of the state’s water. The reductions will mostly impact farmers.

The sparse snowpack this winter soaked into the ground during the hot, dry spring — producing little runoff.

The lack of runoff has drained reservoirs across the region just when they should brim with snowmelt. Lake Powell on the Colorado River holds just a third of its capacity and giant Lake Mead holds 38% of its capacity.

If Lake Mead falls to 22%, Arizona will lose its entire allotment — another million acre-feet. Arizona and Nevada are last in line of the seven states with rights to the Colorado River, behind California and the four upper-basin states.

Rim Country and the White Mountains have not escaped the effects of the “extreme” or “exceptional” drought now settled heavily on the region.

Roosevelt Lake still holds 77% of its capacity, but the reservoirs on the Verde River have dwindled. The entire Salt and Verde reservoir system now holds 74% of its capacity — compared to 98% at the same time last year.

Streams are already running dry, with the two driest months of the year still ahead.

In Rim Country, the East Verde River’s running at less than 1 cubic feet per second and will likely run dry in stretches soon. Normally, SRP pumps enough water out of the C.C. Cragin Reservoir to put 11,000 acre-feet in the East Verde and another 3,000 acre-feet in Payson’s domestic water pipeline. But the reservoirs at just 29% of capacity and SRP probably won’t pump any water out at all. Last year at this time, the reservoir was overflowing.

Streams in the White Mountains have also dwindled. The Salt River’s flowing at just 155 cfs as it enters Roosevelt, about 13% of normal. The Black River’s flowing at 56 cfs, the White River at 42 cfs and Carrizo Creek near Show Low at 3 cfs, and Cibecue Creek at 8 csf — all far below normal for this time of the year.

All told, Roosevelt Lake is receiving just 22% of its normal inflow from the streams and rivers that drain from Rim Country and the White Mountains.

The fire season is already in full swing, with several fires already having forced evacuations across the state — at least a month before big fires normally get started. The closest big fires are the 1,800-acre Bonito Rock Fire on the Whiteriver Apache Reservation, which is only 40% contained and the 2,000-acre G22 fire 18 miles southwest of Heber which is 70% contained. Other fires in the state include the 1,148-acre Margo Fire near Tucson and the 1,300 Flag Fire, which is 13% contained and caused evacuations near Kingman.

The dry winter and spring may solidify the status of the current, 20-year drought as the worst drought in the past 1,000 years — as far back as estimates based on tree-ring studies go.

A growing body of research suggests we’d best get used to a fierce, early fire season and chronic water shortages throughout the state.

A host of studies have linked the steady rise in global temperatures to drought, megafires, floods and unpredictable rain and snow totals in the Southwest. Most climate researchers say the steady increase in heat-trapping greenhouse gases due to human pollutants has increased the region’s existing variability — turning what might have been a normal dry spell into a megadrought.

One University of Arizona study based on data from 300 weather stations across the West found that the average rainfall in Arizona has dropped by a stunning 4 inches per year since the 1970s. Moreover, the average dry spell has increased by 50% — from 20 days to 32 days. In the desert parts of the state, the average stretches without rain have increased from 31 days to 48 days. Average rainfall in the desert portions of the state has dropped from 10 inches annually to just 7 inches.

The continued projected rise in temperatures could result in a 25% reduction in the flow of the Colorado River by 2050. Already, the past 12 months rank as the driest on record in Utah, Nevada, Arizona and New Mexico and the fourth-driest ever in Colorado, according to the National Weather Service.

This winter, snowpack on the Colorado River watershed was just 71% of average. That reflects a steady rise in average temperatures, with the last 20 years 2 degrees Fahrenheit warmer than the average for the 20th century.