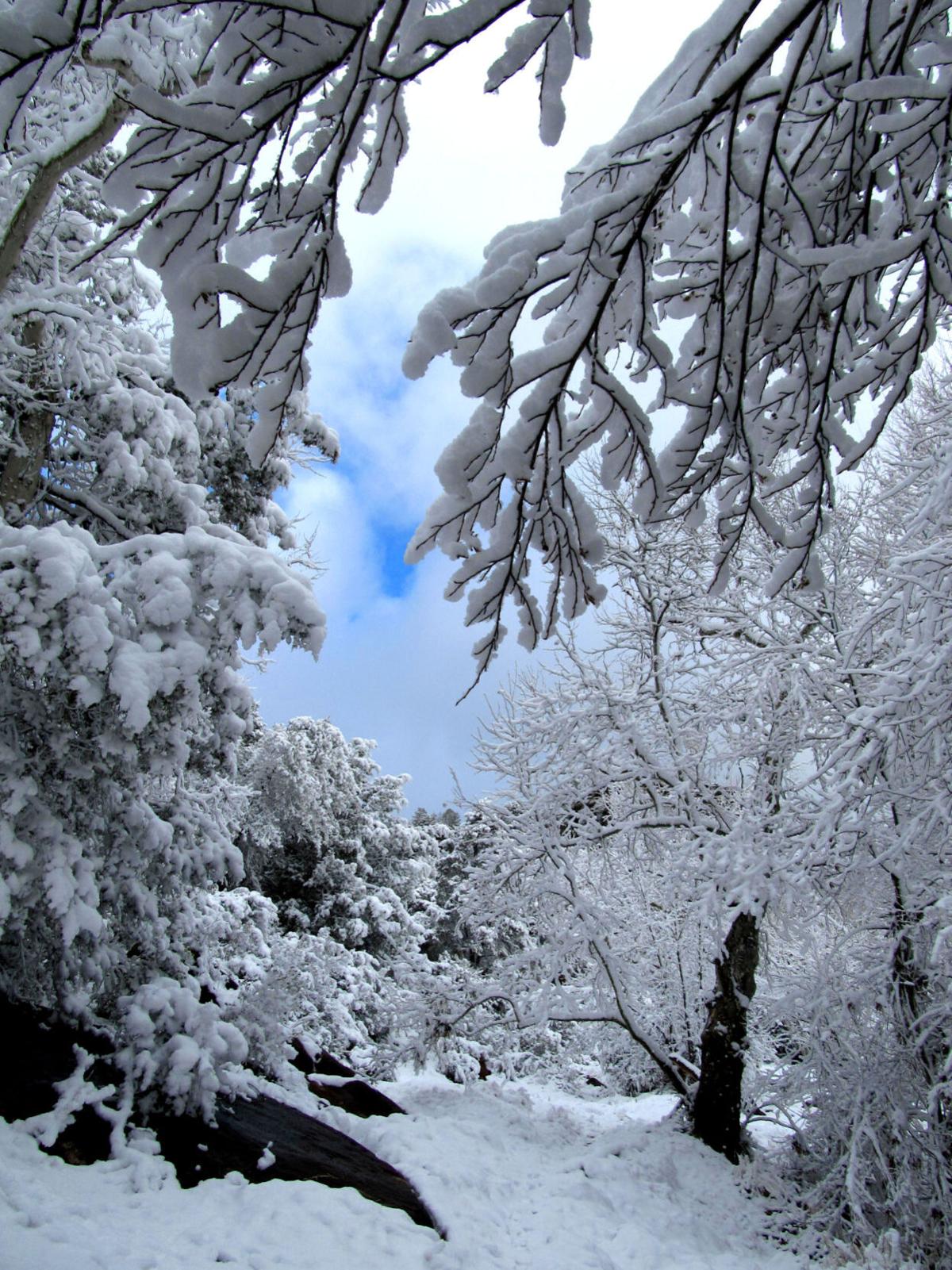 This file photo shows the aftermath of a heavy snowfall on the Rim — like the one predicted to hit the region Sunday through Tuesday. 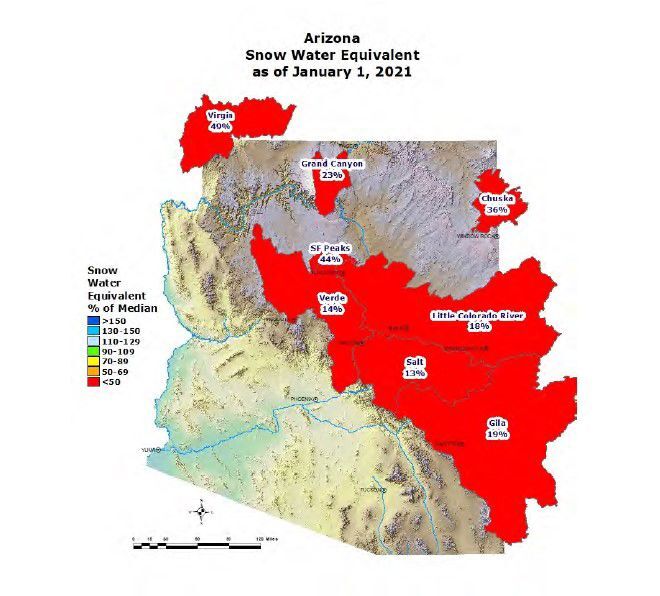 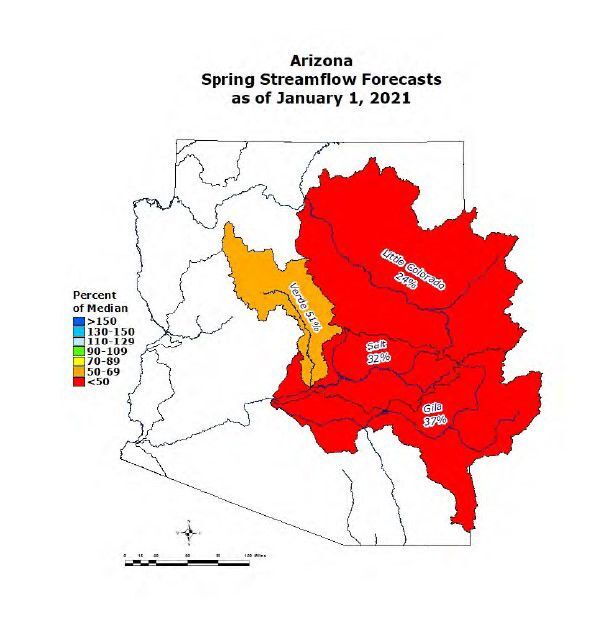 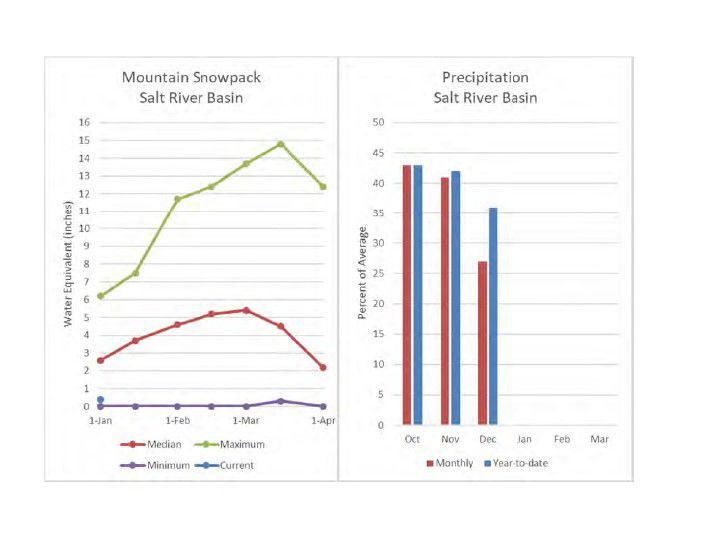 Precipitation has remained far below normal on the Salt River watershed this winter.

This file photo shows the aftermath of a heavy snowfall on the Rim — like the one predicted to hit the region Sunday through Tuesday.

Precipitation has remained far below normal on the Salt River watershed this winter.

By the time you read this, you could be buried in the first big snowstorm of winter in Rim Country.

But don’t put your weather prayers away just yet — the storm won’t do much to end the “exceptional” drought or mitigate what may turn into a deadly fire season, say weather forecasters.

The forecast prompted the Roundup to print the paper early to avoid sending route drivers out into those conditions — but it means we had to write this story based on the forecast rather than waiting to see if the weather service got it right.

Still, so long as your pipes don’t freeze in the cold snap predicted to follow the storm this week, you can wallow in this fleeting snatch of winter.

But best snuggle in, since the National Weather Service predicts “impossible” travel conditions on Sunday through Tuesday.

Unfortunately, the longer-term forecast suggests the storm will offer only a temporary reprieve from the hot, dry conditions.

Before the storm hit, the watersheds of the Salt, Gila and Verde rivers in January had between 13% and 44% of the normal snowpack, according to the U.S. Department of Agriculture’s Jan. 1, 2021 Arizona Basin Outlook Report. The normally snowy Mogollon Rim country had just 5% of its normal snowpack. So the storm this week will deliver more moisture and snow than the region’s received so far this winter.

Overall, Arizona’s high country has just 27% of the normal snowpack (snow-water equivalent), according to the snowpack report.

That includes 18% in the Little Colorado River Basin fed by the White Mountains, 14% on the Verde River, 13% on the Salt River watershed and 19% on the Gila River watershed.

The situation contrasts with last year, when most of those same watersheds had perhaps 150% of the normal snowpack in January, before the winter storms dried up, the spring came in bone dry and the monsoon all but failed. Last winter, we had a whole chain of big storms — not just one.

This year, the only mountain range with even close to a normal snowpack was Mount Humphrey’s overlooking Flagstaff, with 44% of its long-term average.

Ironically, Chuska Mountains had 36% of its normal snowpack — much better than the White Mountains or Rim Country — even though the Navajo Reservation has been afflicted by extreme drought for several years.

The entire region remains in the grip of extreme or exceptional drought, with virtually every reservoir well below normal — especially on the Colorado River.

The National Weather Service predicts a dry, hot spring and another desperate fire season. The big snowfall this week may provide enough moisture to postpone the onset of those conditions for an additional week or two — but the thirsty soil will likely absorb most of the moisture.

“Once again, many state drought teams noted that in areas where rain and snow fell, it wasn’t enough to increase moisture availability,” said the forecast. “In areas where it didn’t, such as the Southwest, the conditions either didn’t yet warrant additional degradations or, because they were already in exceptional drought, could not be degraded further. Snowpack and snow-water equivalent are well below normal and soils are dry. Ranchers have noted that natural forage is insufficient or depleted.”

On average, the forecasts predict stream flows this spring will reach only about 24% of normal. That ranges from 51% of normal on the Verde River to 24% of normal in the Little Colorado River watershed. The Salt River forecast falls in between at 32% of normal.

The forecast looks especially grim for the normally productive watershed of the C.C. Cragin Reservoir, which forecasters predict will get just 18% of its normal runoff. The Salt River project emptied the reservoir this fall to provide drinking water for Payson and the Valley. The near-failure of the spring runoff may leave the reservoir mostly empty in the spring, preventing SRP from firing up the pumps, nearly drying up the East Verde River and perhaps forcing Payson to skip a year of its 3,000 acre-foot allotment from the reservoir. Fortunately, even a couple of big storms could brighten prospects for the 64,000-acre watershed, one of the most productive in the state.

Climate experts say the planet set a heat record in 2020, thanks to the steady buildup of heat-trapping greenhouse gases like carbon dioxide and methane in the atmosphere. Measurements show that 2020 edged out 2016 as the hottest year on record, despite a 10% decline in carbon emissions in the U.S. due to the pandemic.

The 2020 measurements make the past seven years the hottest stretch since the start of modern record-keeping 150 years ago, according to the National Oceanic Atmospheric Administration.

The planet has warmed an average of about 2 degrees since the late 1800s, when industrialization started pumping more carbon into the atmosphere. Since 1980, the pace of warming has accelerated — rising about a third of a degree per decade. The levels of carbon dioxide in the atmosphere have risen 50% since the start of the industrial revolution, when carbon dioxide measured 278 parts per million. This spring projections suggest the level will exceed 417 million before springtime plant growth in the Northern Hemisphere reduces levels for the summer.

It took 200 years to produce the first 25% increase in carbon dioxide, but only 30 years to boost levels another 25%.

The rise in average temperatures has pumped more energy into the atmosphere, triggering a cascade of changes according to climate scientists — including things like an increase in drought, heat waves, storms and extreme weather.

One study published in the peer-reviewed journal Science concluded that global warming has been turning moderate droughts into extreme droughts in North America, with the past 20 years marked by an intermittent drought and a doubling of acres burned.

The extremely dry winter and predicted warm, dry spring in the Southwest has been linked to the La Niña sea surface cooling in the Eastern Pacific, normally associated with dry winters in Arizona.

The federal National Interagency Fire Center predicts another dangerous fire season throughout the West — including Arizona — due to the drought, record high temperatures, and far below normal snowpack. The forecast calls for significant wildland fire potential.

The forecast states, “Over the past two months the dry trend has continued across the Southwest, while temperatures have moderated and become more variable. Temperatures have ranged from a few degrees above average across the western half of the area to a few degrees below average across the eastern portions of the area. Precipitation was generally 50%-70% of average or less except for notable areas of above average precipitation, largely the result of a single storm in mid-December.

“A moderate La Niña continues, and this usually results in normal to above normal temperatures and drier than normal conditions through winter for the Southwest. Long range outlooks are persisting La Niña into the spring, and temperature and precipitation outlooks are likewise extending the forecast for overwinter warm and dry conditions into March and April.”

I like that you revised the headline from “Mega storm won’t tame mega drought” to something much less Eeyore. Since no large storms were predicted to happen this winter, we must hope to have more surprises like this, however inconvenient they are in the short term. I was delighted to get as much snow as we did, even as I survey the tree carnage in my yard.