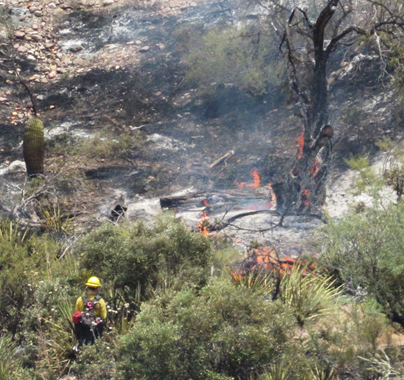 A firefighter monitors a burning juniper tree in the fire’s interior. 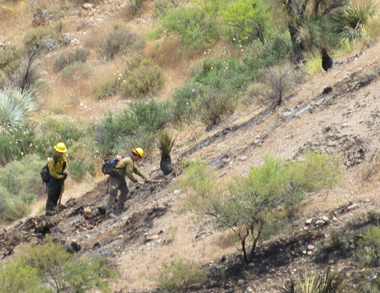 Firefighters dig line and monitor hotspots on the steep terrain of the Blevens Fire.

A firefighter monitors a burning juniper tree in the fire’s interior.

Firefighters dig line and monitor hotspots on the steep terrain of the Blevens Fire.

Crews battled a wildfire in the Tonto National Forest this weekend in 100-degree temperatures.

The lightning-caused Blevens Fire started Friday during a dry lightning storm southwest of the State Route 188 and 288 junction, according to Tonto National Forest officials.

Some 70 firefighters battled the fire in steep terrain and under an excessive heat advisory.

The fire Saturday was mapped at 278 acres.

Hotshots from the Tonto National Forest spent most of Saturday constructing handlines along the fire perimeter’s edge and extinguishing hot spots to prevent the fire from spreading.

“This fire is a perfect example of how aviation and ground crews work in tandem to suppress fires,” said Chris Loxterman, Incident Command trainee. “Aircraft support helps tremendously, but ultimately the firefighters on the ground put fires out. These firefighters have done an excellent job on this fire so far.”

One Type 1 and two Type 3 helicopters, hauling water from local sources, are assigned to the fire, along with Gila County Sheriff’s Office and a Mesa Fire Department medical team.

The fire is burning in brush and grass in an area that has had excessive vegetation growth because of the above average winter moisture.

The Forest Service is coordinating with utility companies APS and SRP, as the fire is approximately two miles from a major power line corridor. No structures are threatened.

While no roads are closed, they ask the public to avoid the area to allow the firefighters to continue fighting the fire unimpeded.