The Camp Fire in Paradise, Calif. (above). Payson’s fuels manager told the Tea Party Tuesday night that Payson’s fire hazard rating is “quite a bit higher than Paradise.” He demonstrated how a wildfire could move through Payson using a simulation table. 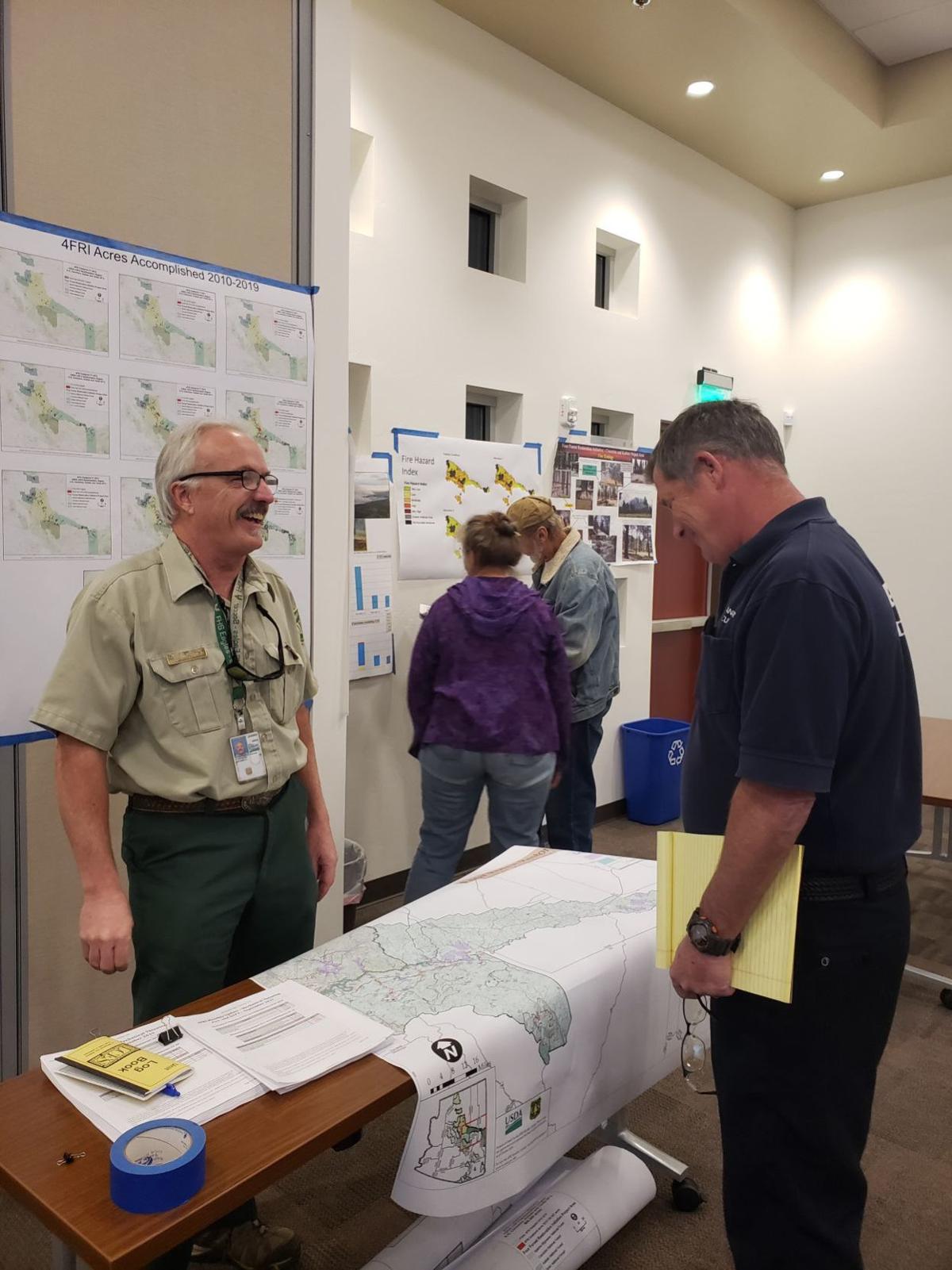 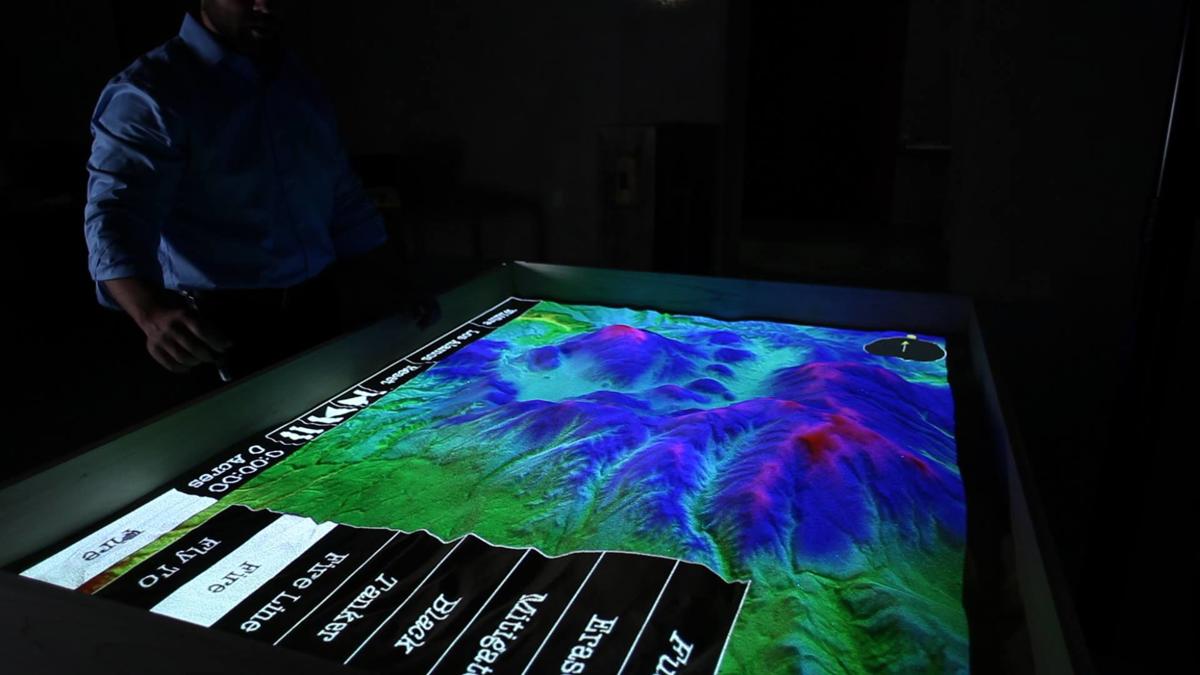 Payson’s fuels manager used a SimTable (similar to the one above) to model how a fire would behave if it started south of town and there were 40-mile per hour winds driving it toward Main Street.

The Camp Fire in Paradise, Calif. (above). Payson’s fuels manager told the Tea Party Tuesday night that Payson’s fire hazard rating is “quite a bit higher than Paradise.” He demonstrated how a wildfire could move through Payson using a simulation table.

Payson’s fuels manager used a SimTable (similar to the one above) to model how a fire would behave if it started south of town and there were 40-mile per hour winds driving it toward Main Street.

They watched Payson burn from the south — silent and sobered.

Then they watched Payson burn from the north.

It felt worse every time the flames crept into town, driven by a 40-mile per hour wind as they marched over the hill and down onto Main Street.

“If you look at some of the YouTube videos, you can see what Paradise looked like before the fire. You could get confused — thinking you’re driving down the streets of Payson. We have a very high potential of having some serious problems with a wildland fire,” said the 35-year fire veteran, who retired to Payson, but was so alarmed by the overgrown state of the town and the surrounding forest that he took the just-created job as Payson’s fuels manager.

National ratings rank the wildfire risk in Payson as significantly higher than it was in Paradise, based on vegetation, terrain, fire history, escape routes and other factors. The risk ratings also include things like the age of the population and the percentage of people with disabilities, which can affect the speed of an evacuation.

Now McCully’s been asked to draft a new attempt to adopt both a Firewise brush-clearing ordinance and a separate WUI building code, designed to prevent the embers of an approaching wildfire from setting a dozen homes on fire at once, overwhelming firefighters trying to keep fires from spreading from house to house.

“It’s a draft right now. We have to go through a process. As far as the timeline, I’m not sure how long it’s going to take before it goes to council,” said McCully.

“It’s just a draft, so it may not cover everything people are concerned about — but we do have a draft written up.”

The fire department, working with a citizens fire committee, drafted a Firewise ordinance several years ago, but the council rejected it — largely from fears it would affect real estate sales, said Tea Party President Shirley Dye, who has served on that committee for the past four years.

Dye said real estate agents objected to the ordinance for fear that people buying homes would insist that sellers bring their homes up to code before closing escrow. When the council held hearings, some residents complained about the expense of clearing brush from around their homes and said they moved here specifically for the heavily forested feel.

The fire department also drafted a WUI building code, which would have mostly affected new construction. A WUI code focuses on things like building materials, flammable overhanging eaves and building porches so embers couldn’t get under the house. One recent house fire north of Payson involved exactly that scenario — when a family’s backyard fire pit wafted embers under the porch and set it on fire. The fire department’s recommended ordinance was based on the International WUI building code and versions already in place in Prescott and Flagstaff.

The Payson council never formally considered that overhaul of the building code, adapted to Payson conditions after months of work by the fire department.

McCully’s presentation on the need for homeowners to clear brush and small trees from around their homes received a supportive response from the 50 people in attendance. In fact, the only criticism came from people who rose to say the town itself has refused for years to thin overgrown lands it owns on the edges of Rumsey Park and elsewhere.

The innovative fire-modeling table drove the point home after McCully’s presentation. The table uses a projector to re-create Payson on a pile of sand, molded to reflect the contours of the topography. The computer model then shows the spread of a fire, based on the vegetation, terrain and wind speed. Repeated runs of the model showed how vulnerable Payson remains to a Paradise-style tragedy, especially if the winds blow too hard and too fast from the wrong direction. The developer of the program lives in Payson and donated the software to the town.

“I retired from the fire service to move to Payson,” said the former San Diego fire captain, “but when I looked around this community, I was concerned enough that I applied for the job. If you look at the national rating of fire hazards of communities in Arizona and California — Payson was quite a bit higher than Paradise.”

McCully said most people are cooperative when he points out the danger to their homes posed by the ladder fuels like brush and small trees. The ladder fuels catch fire easily and then carry the flames into the lower branches of larger trees — which often overhang homes. Those larger trees also drop masses of pine needles on rooftops — the perfect kindling for an ember from a nearby wildfire.

High intensity fires create an intense updraft and sometimes create their own winds in what firefighters call a “plume driven” fire. That’s what happened when the Dude Fire killed six firefighters. A 2,000-foot-high pillar of super-heated air and debris collapsed, sending fierce winds and 100-foot-long tongues of flame outward in every direction — catching the fire crew as they fled. Those plumes also create a rain of glowing hot embers that can fall a mile from the flaming front.

He said since he’s started working with homeowners, 20 or 30 people have voluntarily thinned the brush and trees around their property. Properly done, a Firewise treatment leaves a forested feel but provides a defensible space for firefighters — seeking to prevent a fire from spreading from house to house once embers start a fire on one house. In Paradise, the embers first set homes on fire well away from the fire front. Most of the homes were destroyed as the fire spread through the brush between houses from those initial, ember-lit houses.

Most of the comments at the meeting supported a strong, enforceable Firewise ordinance.

“We tried to get an ordinance going, but we had a lot of people come and say, ‘you can’t tell me what to do with my property,’” said one audience member. “We need some sort of motivational thing — whatever the rah, rah thing is short of having the fire.”

Another resident said the town must lead by cleaning up its own land. “I live behind Rumsey Park. For five years I’ve asked the city to do something about the brush and trees growing through my fence — lifting it up. I finally got a lawyer and the town came and trimmed three feet back. It’s a fire trap. Firewise is a good program — but the city has done nothing but fight me. They said if I trimmed it, I’d end up in jail.”

Another resident commented, “I’ve Firewised my property and my neighbor has Firewised his — but the town has property that comes almost up to ours — and it is a mess. Who do we have to get hold of to get that cleaned up?”

“Give me a call,” said McCully, “and I’ll come out and look at it with you. It costs money — so finding the money in the budget is sometimes difficult. But if you have a problem with town property, give me a call.”

Both Flagstaff and Prescott fire departments have created brush clearing crews to clear public lands and sometimes help homeowners. The towns make a profit on the crews, which work on wildland fires during the fire season and clear areas in and around town during the off season. Tragically, the 19 firefighters killed outside of Yarnell by a brush fire in a thicket that hadn’t been burned or thinned in 50 years were from Prescott — the only city-supported Hotshot crew in the country.

McCully said the town needs an ordinance that makes it possible to get the attention of out-of-town property owners, who rarely seem to care that their overgrown lots pose a danger to the whole neighborhood.

“That’s the problem: One person’s property that isn’t managed is a danger to the whole community. That was the problem with Paradise. Once the fire started into that community and started going from house to house, they didn’t have a chance to stop it. You need to create some kind of barrier between houses so the fire department has a chance to stop it at some point. If you don’t have those firebreaks, the fire just keeps building and going through houses on its way.”