Narrow roads that barely allow one vehicle to pass another will snarl with traffic in case of an evacuation from wildfire. The town now requires future developments to widen evacuation routes. 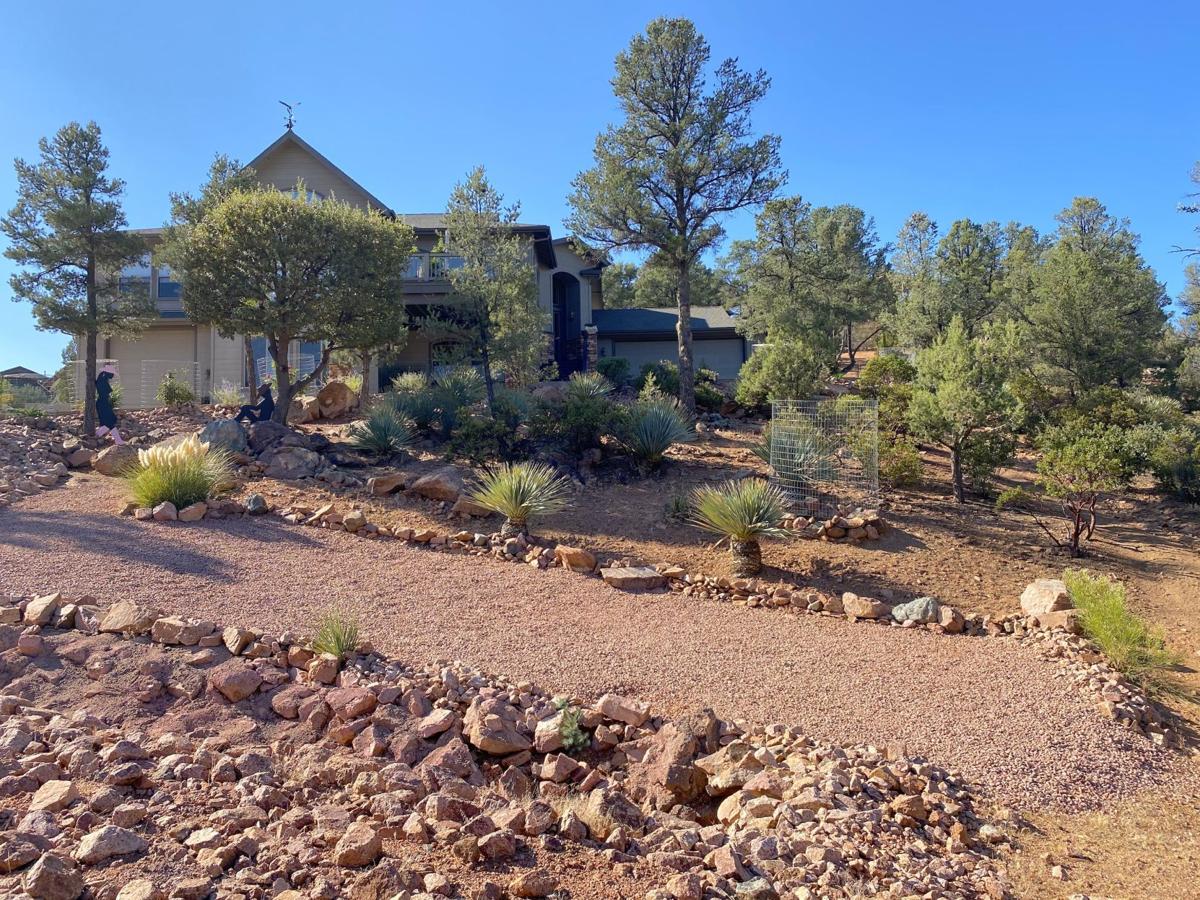 A retired firefighter owns this property off of Phoenix Street. He has worked diligently to Firewise. 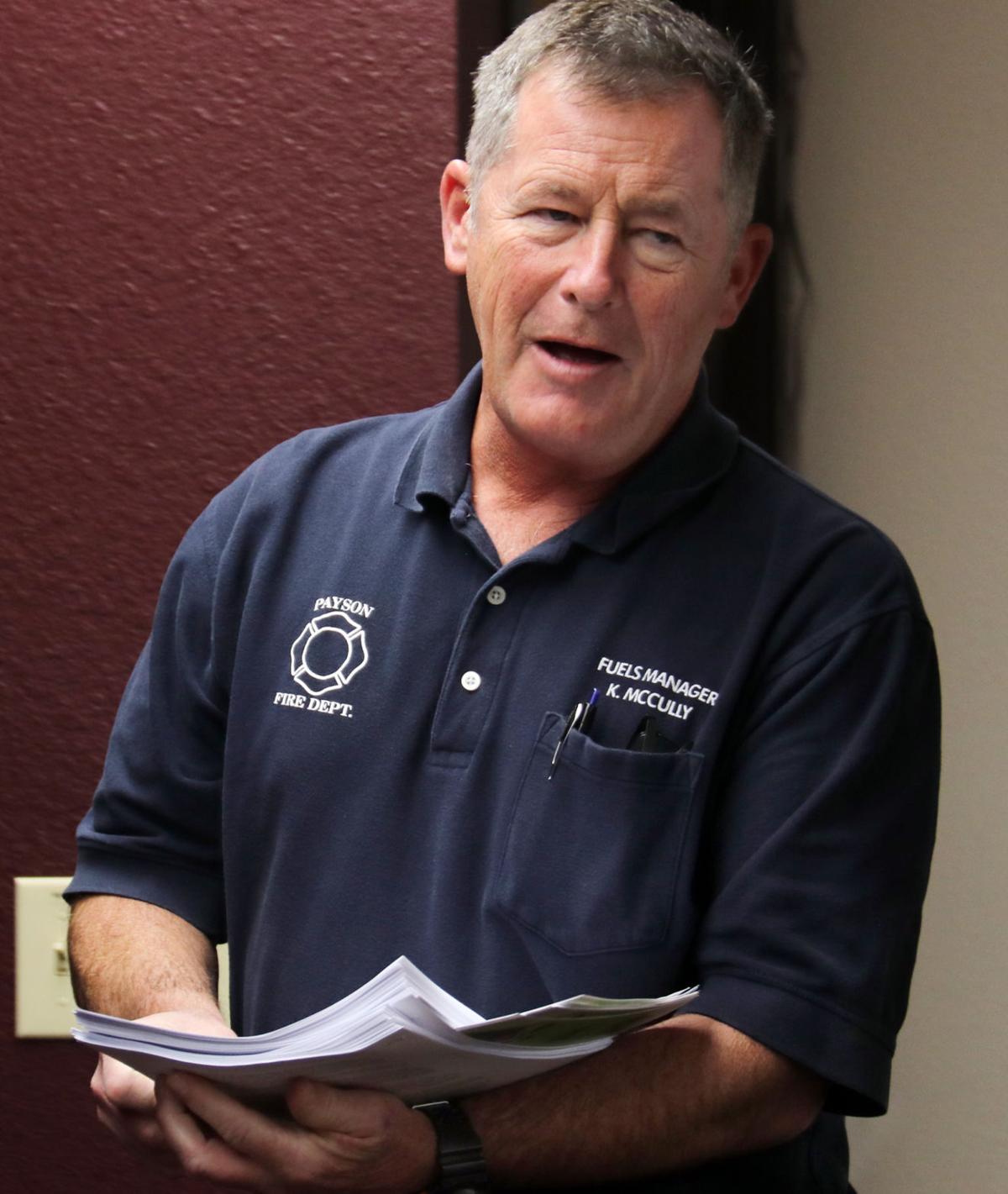 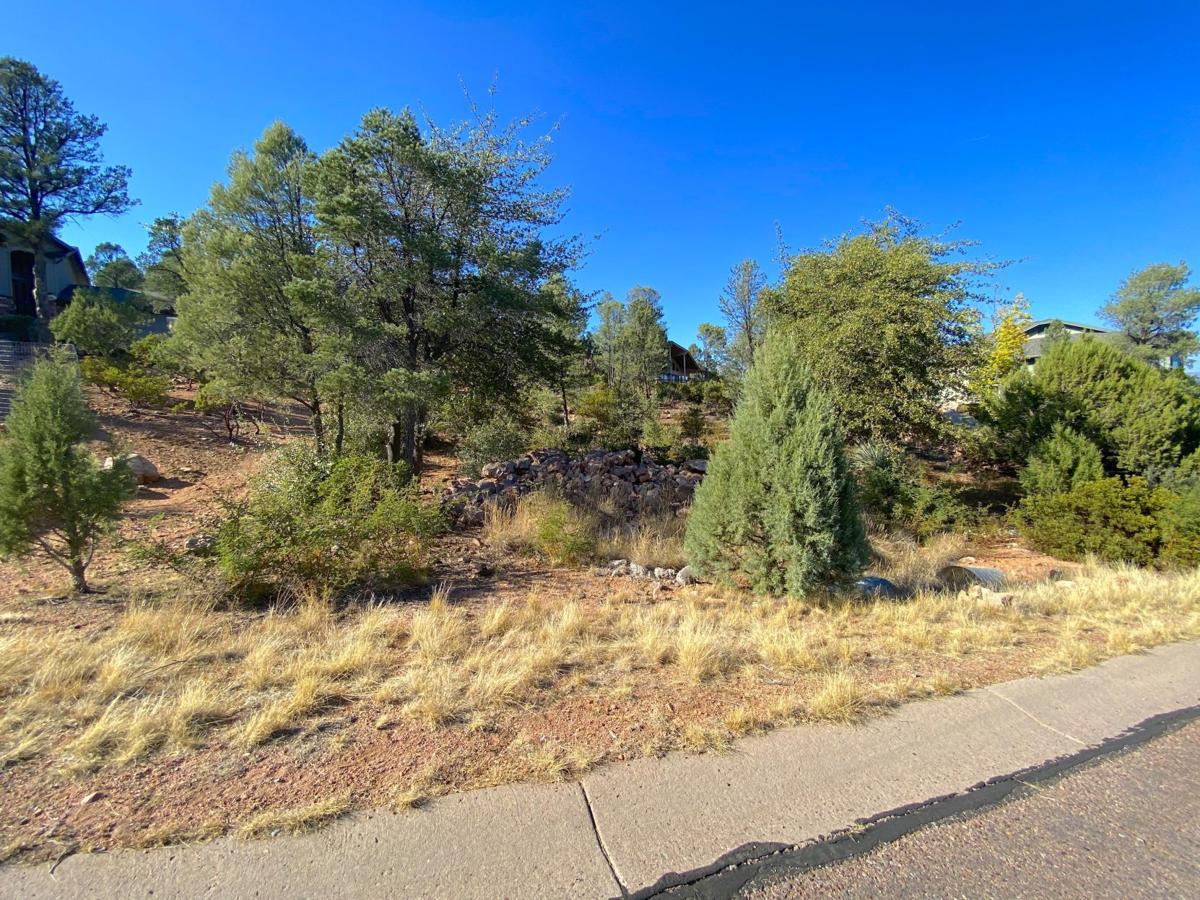 The lot next door to the retired firefighter is not Firewise.

A side by side comparison of a firewised lot with house. The empty lot next door is not firewised.

Narrow roads that barely allow one vehicle to pass another will snarl with traffic in case of an evacuation from wildfire. The town now requires future developments to widen evacuation routes.

A retired firefighter owns this property off of Phoenix Street. He has worked diligently to Firewise.

Yarnell did not prepare for the inferno that swept in out of the overgrown forest and chaparral.

And that cost 19 firefighters their lives.

And 127 people their homes.

Payson has finally started to learn from that tragic lesson.

But has Payson adopted a Firewise brush clearing code — and considered a wildland-urban interface building code — in time?

Studies show that if Yarnell residents had cleared brush from abutting structures, cleaned up ladder fuel and removed duff from roofs, and thinned buffer zones around the community, the community would have survived the fire that caused so much damage.

And those 19 Granite Mountain Hotshot firefighters might not have died in thick brush close to the sanctuary of a Firewise ranch, as they attempted to save Yarnell from itself.

The study from the Pacific Biodiversity Institute found 63 homes survived the Yarnell Hill Fire simply because the owners Firewised their property. The rest of the community fell to the flames, as the fire spread through the overgrown brush and trees from house to house.

If property owners Firewise their property, and harden their structures with fire-resistant materials, they become partners with firefighters, not a liability. The more communities firefighters don’t have to defend, the more they can turn their attention toward land and forest management.

Much has changed since the Yarnell Hill Fire.

California and the rest of the western United States have blown up, with millions of acres burned in wildfires stoked by high winds and crispy dry fuels caused by years of drought and thick forests.

Hundreds of homes and even whole towns such as Paradise, Calif. have burned to the ground. In Paradise, 80 residents died either hunkered down in their unprepared homes or on clogged evacuation routes fleeing the flames.

After the tragedy of the Yarnell fire, the firefighting community has made the hard decision to let homes burn if they have not prepared for wildfire.

Now, insurance companies are hiring consulting firms to decide whether they can afford to insure homes built within the wildland-urban interface.

For 15 years, Corelogic has provided just such a service. Through its own scoring process, Corelogic places a value on every property in areas the company has determined face the greatest risk from wildfire.

Corelogic then reports to insurance companies how many properties are at high risk in a given area. The company estimates what it would cost to rebuild properties in that area, including damage from smoke and firefighting activity. The consulting firm even gives companies a heads up on how bad the fire season is shaping up to be to help them prepare.

Arizona has made it onto Corelogic’s top 15 list of states that have 93% of wildfire burned acreage per year.

Those same 15 states account for 98% of the wildfire-related losses in the country, with an estimated $638 billion in reconstruction costs.

Corelogic has found there are 2 million single-family homes at risk for destruction due to wildfire this year.

Now Corelogic will add the risk associated with embers from distance fires to its score card, which will increase the losses due to wildfire.

An expensive proposition for insurance companies and homeowners.

Study after study proves Firewised landscaping reduces the risk to the structure from wildfire.

Even Corelogic has joined the fire mitigation bandwagon to protect insurance companies from losing everything if they insure a home in wildfire country.

“Mitigation efforts, such as hardening the roof or property perimeter, can make the most impact ...,” said the company on its website.

Firewise USA, in partnership with the Insurance Institute for Business & Home Safety, has put out a fact sheet to help homeowners understand the most effective Firewising choices.

“I tell them to start by cleaning up everything next to their home,” he said.

Studies have proved that when flames are five feet away, the fire generally can’t ignite the building.

However, if mulch, wood chips, needles or weeds and grass nestle at the base of a wall, they serve as kindling to ignite the siding and eaves.

The taller the weeds and brush, the higher the flames and greater the radiant heat.

Corners offer a particular problem because they cut the wind, which causes more direct contact with flames.

Instead of using mulch to fill areas, consider rock and concrete walkways.

Keep any lawn or low-growing non-woody plants — if any — out of the five-foot zone next to a house.

Trim tree branches six feet from the ground. Trim branches away from roofs.

If the home has any decks, make sure to protect five feet out from the edge of the deck as well.

Ultimately, remove fuels beneath all the trees, knock back grass and weeds and space bushes far enough apart so they do not start the house on fire.

McCully and MacKay can quickly take anyone to Payson neighborhoods that illustrate the difference between a well-prepared, survivable neighborhood and a potential death trap.

Some older neighborhoods have narrow streets on which one car can barely pass another.

The two firefighters have seen dangerous traffic snarls during evacuations. Not only does that prevent residents from escaping, but it prevents fire trucks from moving into the neighborhood to protect homes until the evacuation is done — which is often too late to save the homes.

Moreover, in poorly prepared neighborhoods, homeowners have allowed trees to droop over roofs and streets. Leaves, weeds and grasses grow right up to the sides of some houses. Bushes choke yards.

But the two fire professionals don’t want to scare residents of these neighborhoods. Instead, they seek to reassure them by telling homeowners they “don’t have to clear cut.”

“We want them to remove ladder fuels and prioritize (Firewise),” said MacKay.

As an example, MacKay and McCully went to one of the newer neighborhoods behind Home Depot. The houses use mostly non-flammable landscaping material such as rocks and local plants.

Weeds are not present.

Bushes and trees have plenty of space between them.

Tree branches are trimmed at least six feet off the ground.

The streets were built to accommodate both cars and fire trucks.

MacKay and McCully realize it’s a one property at a time proposition to prepare Payson for the next wildfire.

That’s exactly what the residents of Yarnell failed to do.

They didn’t have a Firewise ordinance.

They didn’t insist the state thin the overgrown chaparral on the state lands surrounding the community, which hadn’t burned in decades.

They didn’t clear the brush and trees from around their homes.

So when the fire blew up, they had no plan — and no safe space where firefighters could make a stand against wind-driven, 100-foot-long flames that raced through the tinder-dry forest faster than a man could run.

The Hotshot fire crew saw the danger to the community, which the residents had ignored for so long. They tried to make it down off the burned hilltop on which they stood in time to defend the community.

But they didn’t make it.

That brave, mistaken, tragic decision to try to save the town, cost them their lives.

And it poses an urgent, potentially deadly question for Payson and Pine and other forested communities.

Did we learn anything from Yarnell?

“I tell them to start by cleaning up everything next to their home,” Kevin McCully