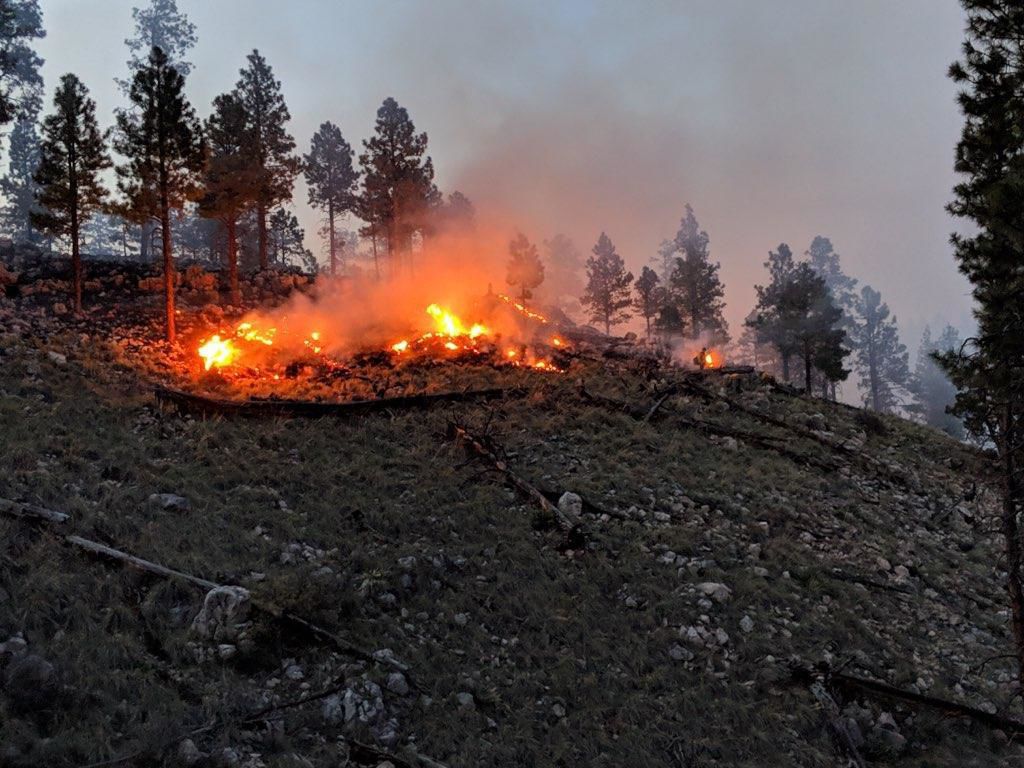 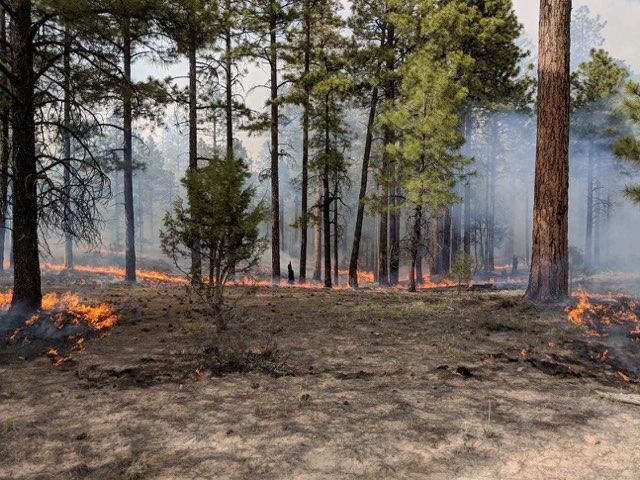 Crews worked to contain the 503-acre Hoyle Fire this week, some three miles from Heber. That fire is burning through an area charred by the 2002 Rodeo-Chediski Fire.

Crews worked to contain the 503-acre Hoyle Fire this week, some three miles from Heber. That fire is burning through an area charred by the 2002 Rodeo-Chediski Fire.

Fire officials are taking advantage of a wet winter and a cool spring to use managed fires and controlled burns to blunt the fire danger throughout the region.

The Forest Service worked last week to turn a 500-acre lightning-caused fire to good advantage by establishing fire line boundaries and letting the slow-moving flames clear out the downed wood and debris left almost two decades ago by the Rodeo-Chediski Fire near Heber.

Meanwhile, crews worked to contain the 503-acre Hoyle Fire, some three miles from Heber and visible from State Route 260 between milepost 296 and 299 as well as off the Black Canyon Road (FR 86).

That fire is burning through an area charred by the 2002 Rodeo-Chediski Fire, which nearly destroyed Show Low as it rampaged across 500,000 acres in the hot, dry month of June.

The Rodeo-Chediski left behind enough charred wood to sustain the Hoyle Fire, which sent smoke drifting through Heber and Overgaard atop the Rim.

Although fire danger is rising steadily with the temperatures, fire crews are taking advantage of the last few weeks of cool conditions to work on using fire to thin and restore forests.

For decades, the Forest Service put out most fires as quickly as possible. But in the past decade a whole new strategy has developed, based on intensive planning to determine when a fire can be contained and allowed to burn safely within a certain area.

For instance, the pile burns near Young are part of a decade-long effort by the Forest Service to thin some 50,000 acres around Payson, Young, Pine and other Rim Country communities. Those buffer zones make it more likely a crown fire like the Rodeo-Chediski will drop to the ground, giving fire crews a fighting chance to save towns like Payson.

A growing body of research suggests such buffer zones and managed fires during the cool, moist months offer one of the few strategies likely to save forested communities from a rising number of megafires — like the Rodeo-Chediski or the blaze that destroyed Paradise, Calif., killing 85 people.

For instance, scientists from the National Center for Atmospheric research recently published a study in the Geophysical Union suggesting the current warming trend will magnify the already sizable effects of the La Niña and El Niño warming and cooling cycles in the Pacific Ocean.

The El Niño pattern involving sea surface temperatures in the Eastern Pacific has a variety of effects, including winter snowfall in California and Arizona. It’s also associated with drought years and fire risk. In El Niño patterns, sea surface temperatures rise above normal — often causing wet winters in Arizona. In La Niña patterns, the sea surface cools — often producing dry winters in the Southwest. The heating and cooling has different effects all across the globe.

The researchers considered a whole array of factors and checked the predictions on wildfire patterns for a host of climate models. As the average global temperature rises, the effects of El Niño will grow more extreme, concluded Samantha Stevenson, a UC Santa Barbara faculty researcher who participated in the study.

Changes in the ocean temperature in turn affect the atmosphere, often shifting the position of the storm-steering jet stream, said Stevenson. “These changes in atmospheric circulation patterns in turn cause shifts in things like wind patterns, cloud cover, atmospheric temperature and precipitation,” she noted. “This just really highlights the importance of getting future projections of El Niño impacts and magnitudes correct.”

This year’s wet winter brought about 130 percent of the normal winter rain and snowfall to Rim Country and was linked to El Niño conditions in the Pacific.

Another study came to similar conclusions about the rising number of megafires in the future, according to a summary of the research by Utah State University researchers published in the peer-reviewed Earth’s Future, published by the American Geophysical Union.

The researchers noted the number of fires and the total acreage burned has actually dropped dramatically in the past 100 or 200 years — but the nature of the fires has changed even more dramatically.

The researchers concluded that before Europeans arrived in the Southwest, 4 to 12 percent of the landscape burned each year — perhaps helped along by fires intentionally set by Native Americans, presumably to restore the forest and improve conditions for the animals they hunted.

Starting in the 1900s, the U.S. Forest Service instituted a policy of putting out fires within the first 24 hours, which for decades dramatically reduced the number of fires and the acres burned.

In the past decade, the number of acres burned has increased dramatically. Researchers blame the fires mostly on the dramatic increase in tree densities and the downed and dead wood accumulating on every acre of ground. The decade-long drought and a small rise in average temperatures combined to create a perfect storm of wildfires, with repeated records for damage caused, lives lost and acres burned in the past decade.

Those fires are high-intensity crown fires, which often destroy every tree and sear the soil, causing massive subsequent floods and erosion.

That has prompted forest managers to scramble to use natural fires to thin the forest and clear out debris on the forest floor whenever possible.

“If we hope to predict the future risks wildfires pose to water resources and more effectively manage our ecosystems, then it is critical we give other wildfire attributes, specifically burn severity, more consideration,” said Brendan Murphy, lead author of the Utah State study.

Last week’s Hoyle Fire near Heber demonstrated that even a big fire like the Rodeo-Chediski leaves behind enough debris to fuel several subsequent wildfires.

However, even with the new Forest Service policy on fire management, the managed fires and controlled burns still don’t come close to burning enough acreage to approach the 10 percent figure documented in the historical records.

Unfortunately, the Forest Service’s use of managed fires is severely limited by the presence of so many communities like Payson and Show Low that don’t have cleared buffer zones, wildland-urban interface building codes and vegetation codes. Even the close approach of a wildfire — or even a managed fire — can set such poorly prepared communities on fire.

The most ambitious forest thinning project ever devised — the Four Forest Restoration Initiative — has a target of about 50,000 acres annually in a forested area that covers more than 4 million acres. That represents about 1 percent of the area in need of a return to a more natural fire frequency. Even at that, the project has lagged far behind its goals.

However, in order to substitute for the natural number of low-intensity fires, the project would have to thin or burn 400,000 acres annually, just to return to natural, healthy conditions.