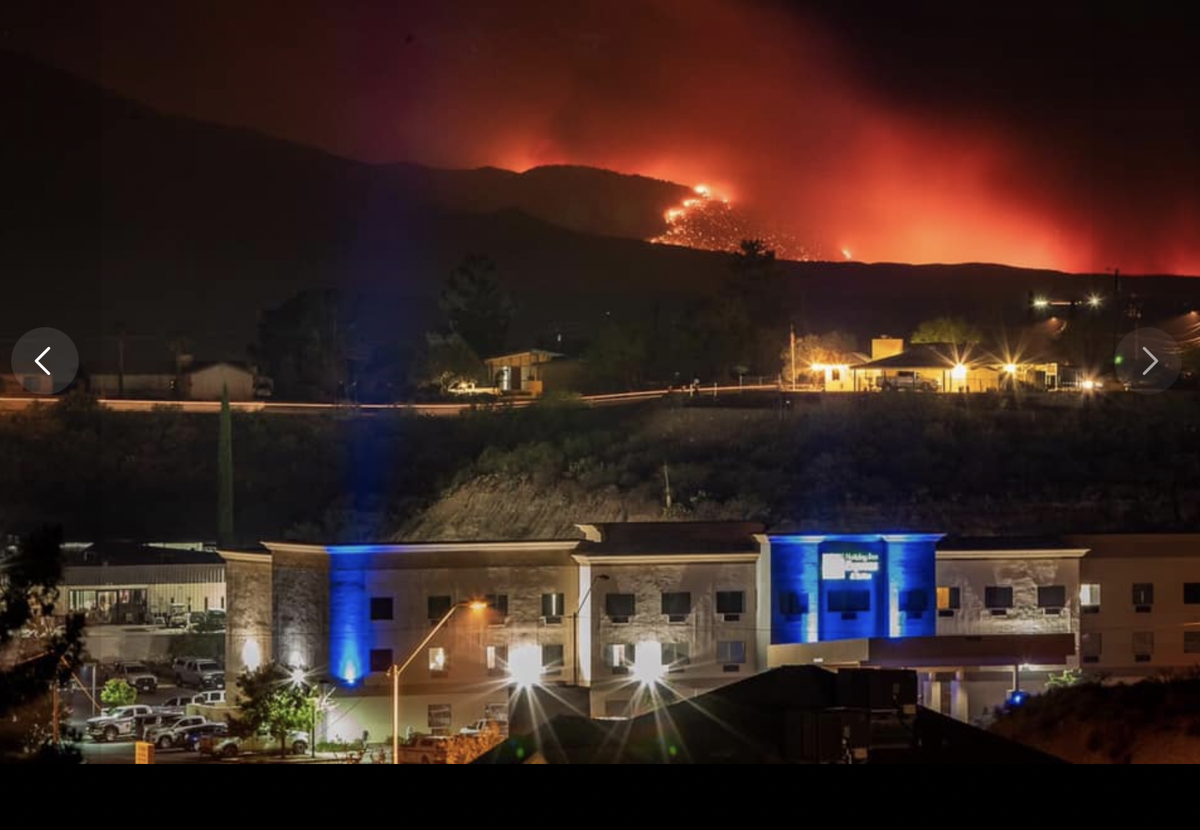 A photograph of the Telegraph Fire from Globe at night posted by Melly Jackson on social media. She asked her friends and family to “pray for a miracle.” By morning, the threat had eased. 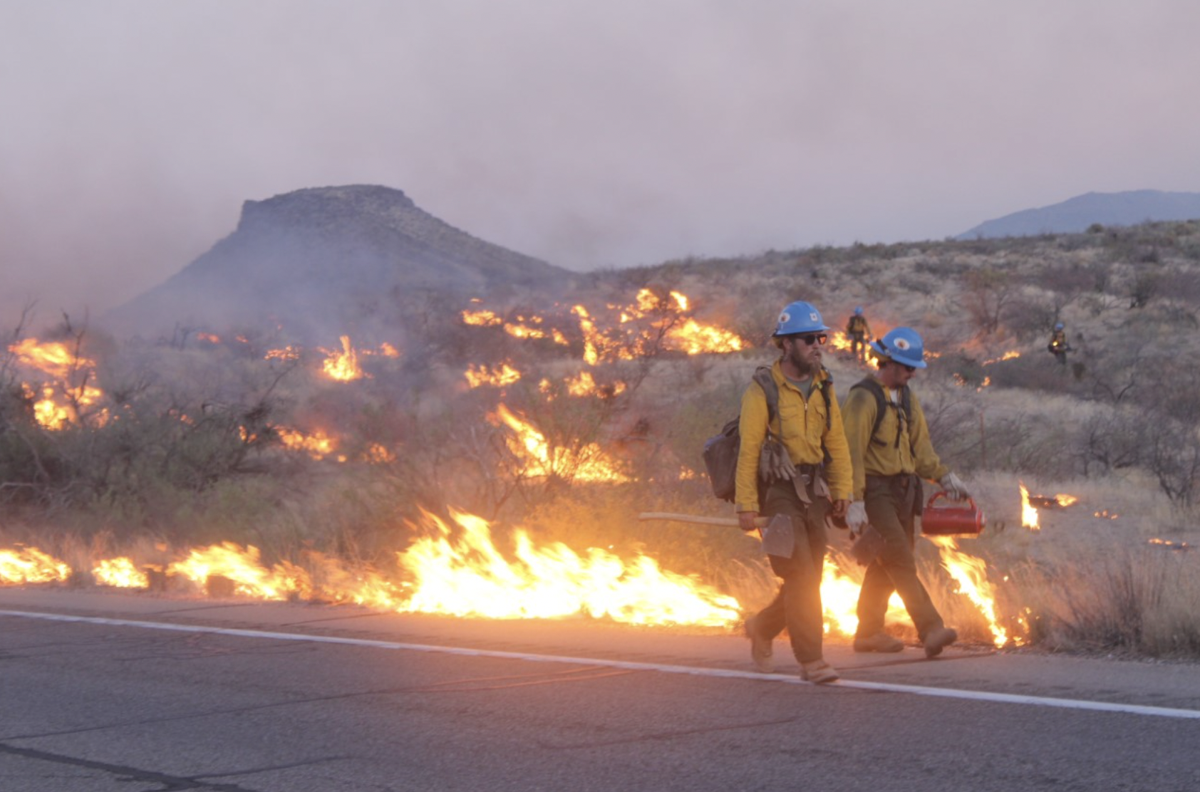 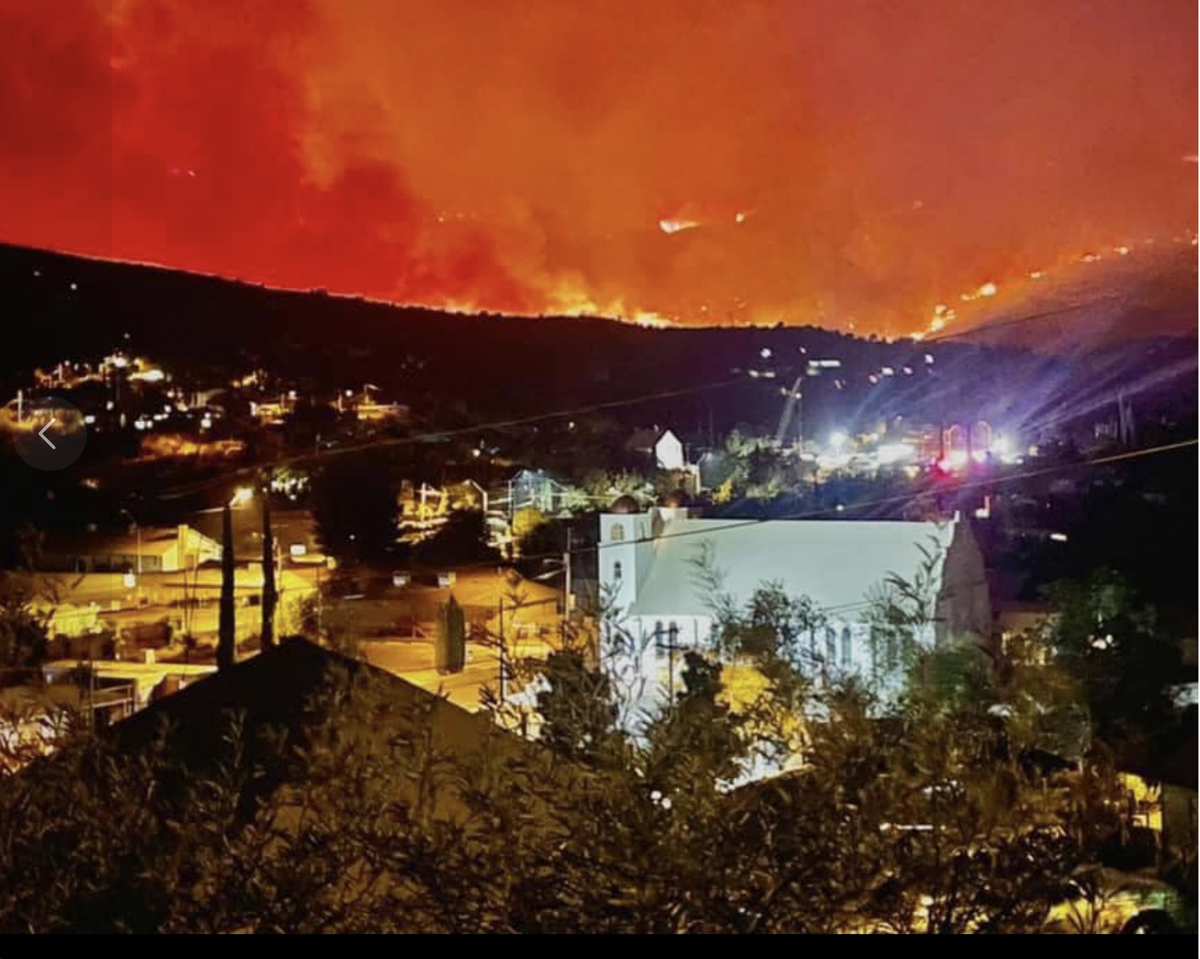 Justin Lovett snapped a photo of the Telegraph Fire threatening Miami on June 7. Parts of the town evacuated, but were allowed to return by the next day. 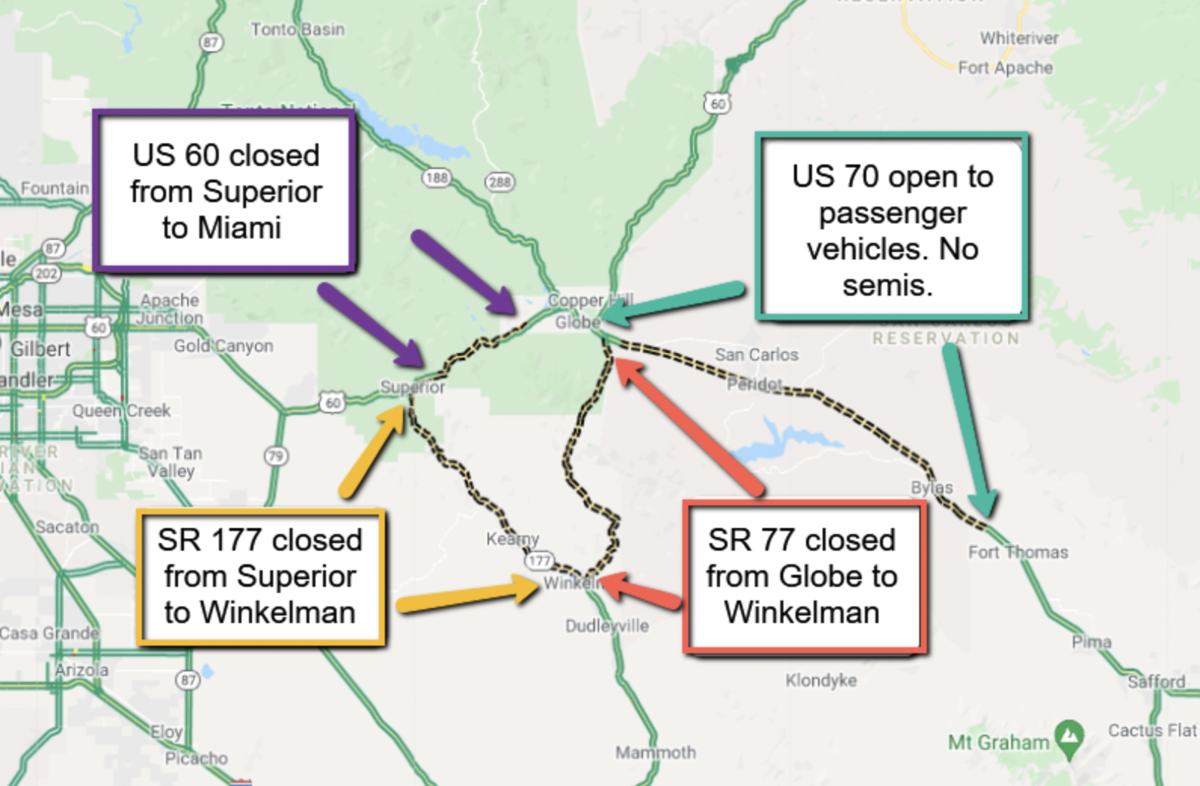 Closures due to the Telegraph and Mescal Fires:

US 60 Superior to Miami

Alternate route to get to Globe from Phoenix, Hwy 87 to Hwy 188.

The Telegraph and Mescal fires in southern Gila County continue to burn out of control after charring more than 150,000 acres, forcing multiple evacuations and engaging more than 1,500 firefighters.

The two fires are both burning south of Highway 70 between Peridot and Superior in southern Gila County and have threatened Globe, Claypool and Miami, making national news.

Both fires have escalated to Type 1 incidents and are considered human caused.

The fires have prompted the Gila County Board of Supervisors to declare a state of emergency.

The fires are showing “extreme” behavior with fire conditions in vulnerable territory. The drought is the worst the state has seen in 1,000 years, according to tree ring data. Fuels have a lower moisture content than seen during fire seasons that spawned recent megafires.

Moreover, the National Weather Service sees no chance of rain in the next week as Arizona heads into another heat wave. Some 87% of the state remains in “severe” or “exceptional” drought.

Forest Service updates call the fires “aggressive,” “erratic,” and “extreme.” The fuels — grass, manzanita and oak brush in the lower elevations, juniper and pinyon trees in the higher — burn intensely with “wind-driven runs.”

When they can, firefighting crews use back burns and roads to create a fire line to stop the spread. So far, the Telegraph Fire has destroyed five structures.

On the sixth day of the 84,000-acre Telegraph Fire (June 10), burning south of Superior, some 300 firefighters continued to scout for natural barriers, roads, old fire lines and mine pits “they can tie together to stop the fire spread.” So far, firefighters have controlled 34% of the perimeter.

But command recognized “the fire is expected to be active and aggressive, driven by gusty winds that could cause active runs to the northeast.”

At one point, the fire raged only two and a half miles from Darrell Stubbs’ Globe home.

“Last night, I sat on my porch and watched the fire travel and burn up a lot of country I know,” he said on his Facebook page.

He knows what firefighters face, since he fought the deadly 1990 Dude Fire in Payson.

“Firefighters put their lives on the line, so we need to make sure that we appreciate them,” he said remembering the six Dude Fire firefighters who died as well as the 19 killed by the Yarnell Hill Fire.

“Thank you for putting your life on the line to protect us,” he said.

Former Globe resident Melly Jackson “felt so powerless” as she watched the Telegraph Fire creep up on the town.

“So many people I care about are in this one place, and most of them have not, or cannot, leave because of stubbornness or work demands,” she said.

She asked for many prayers, but ended with this request.

“Please pray the fires stop before they destroy the one place that has been the foundation and root of everything we have grown from. Please pray for a miracle.”

The same night, Justin Lovett posted shots of his view of the Telegraph Fire in Miami.

He expressed his “thoughts and prayers to those who had to evacuate last night.”

Parts of Miami evacuated, but were allowed to return the next morning.

While the Telegraph Fire has only 18% containment, carefully planned burn out operations have gotten “ahead of the fast-moving northeast edge of the fire” to save communities such as Claypool, wrote incident command.

The 67,000-acre Mescal Fire, however, burning in remote and rugged country “continues to cause challenges to supporting firefighting operations” wrote incident command. As of Tuesday, the 660 firefighters had the blaze 23% contained, according to the update on Inciweb.

This fire caused the evacuation of parts of the San Carlos reservation and the community of East El Capitan. However, fire crews allowed San Carlos residents to return to their homes on Tuesday.

Fire crews hope to keep the Mescal Fire from jumping Highway 70 with firebreaks and burn out operations.

No structures had burned as of June 8.

Cause: Human, under investigation

Location: less than one mile from Top-Of-The-World

Burn along Hwy 60 to keep the fire south of the highway.

Fuels change depending on elevation: lower grass/mesquite, mid, grass/brush, and brush/juniper/pinyon in the higher elevations.

Crews will utilize direct and indirect suppression tactics where feasible.

Firing options will continue as needed.