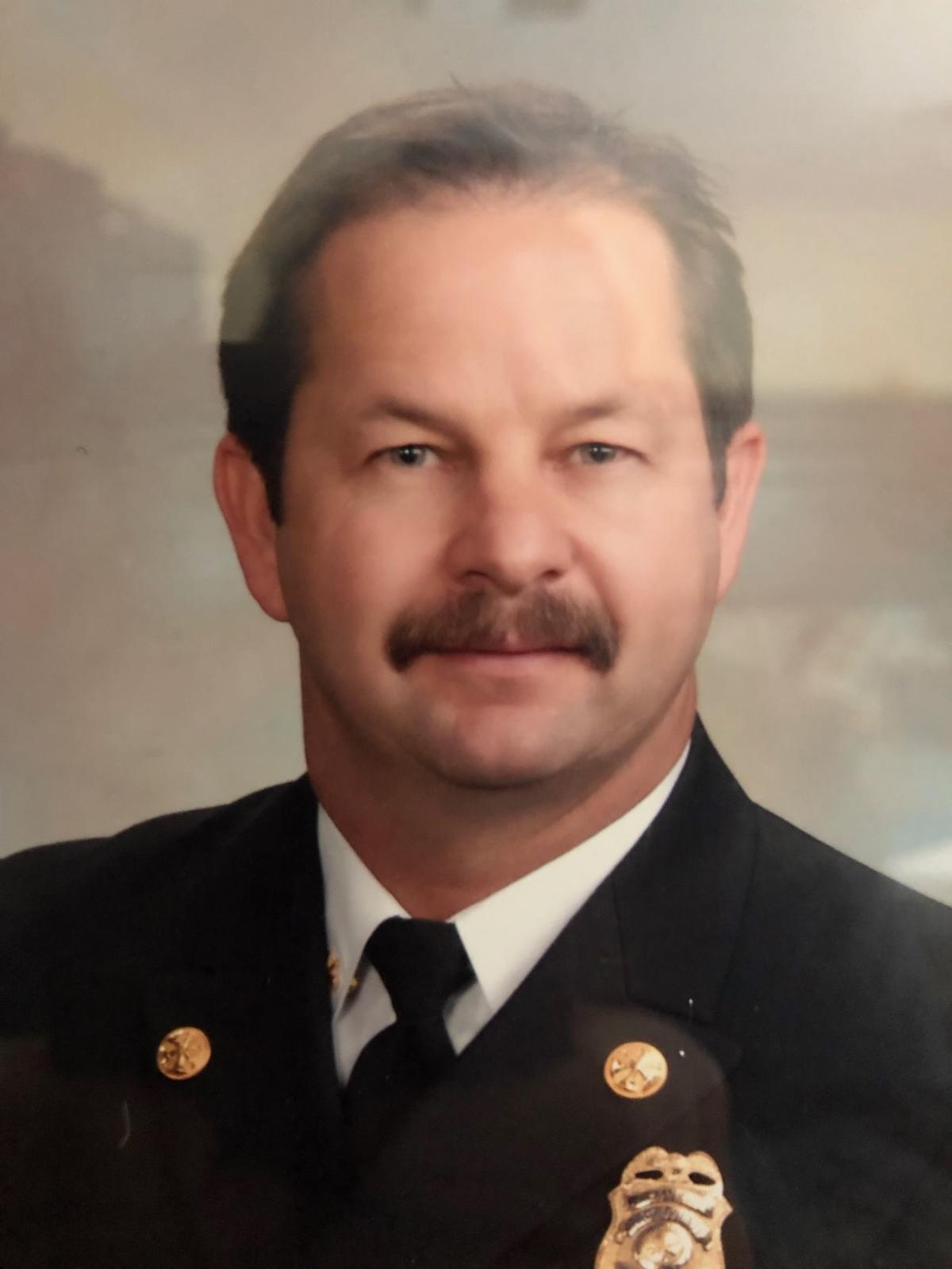 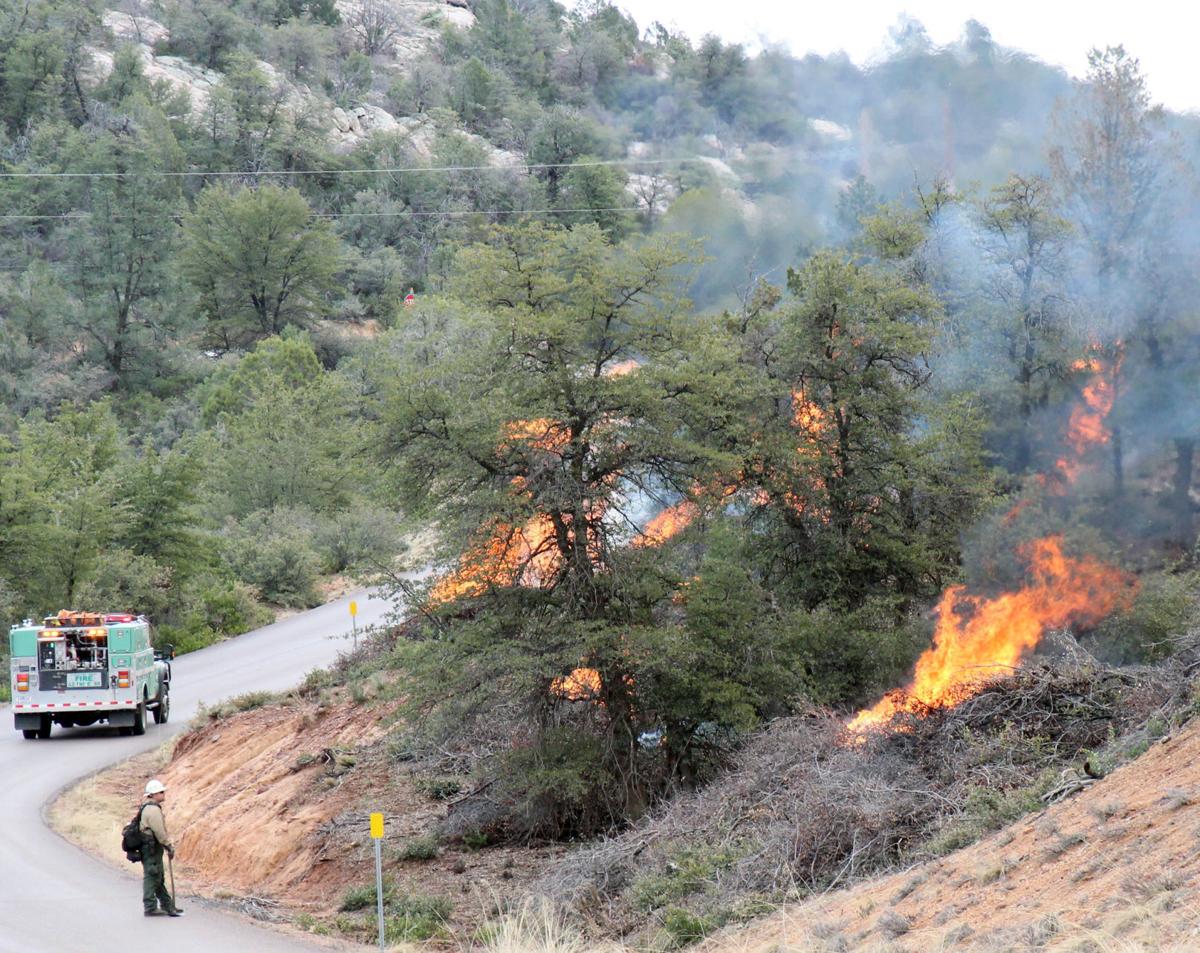 Watching to make sure burn piles in Beaver Valley don’t spread. Building to a WUI code and maintaining a Firewise yard protects property when the wildfire arrives.

Sidney Morel, a retired fire chief and fire marshal from the San Diego area, has seen wildfire do astonishing things.

A friend of Morel’s benefited from the changes. He lived in a shelter-in-place community and was able to safely stay home with his three pets during the Witch Creek Fire. They all survived without a scratch. The only home to burn in his community was a remodel — the wood left outside caught on fire.

Now Morel lives in Rim Country and writes fire protection plans. Despite numerous devastating wildfires in Arizona, little has changed when it comes to WUI building codes and Firewise landscaping.

California has done the opposite. As wildfire seasons have increased in length and severity, the state adopted some of the toughest WUI codes anywhere.

“There has been a major campaign as a result of mega fires,” said Morel. “The Santa Ana winds in California add to the threat. Now the fire season is year-round.”

In comparison, only a handful of Arizona communities have adopted WUI building codes — Flagstaff and Prescott for example.

WUI codes have been on the Payson Town Council agenda for the past 10 years, but the council has adopted only a few minor provisions. Firewise vegetation codes remain voluntary and left mostly to homeowners associations. There is no brush pickup in Payson like the unincorporated communities of Pine and East Verde Estates.

Morel said it took awhile for California to get to where it is now on WUI codes — efforts to require fire-adapted building materials in the San Diego area started in the mid-1960s. But the building industry balked at the added costs, he said.

“Then we had the wood shake fires in the ’70s,” he said. “The building industry said, ‘OK, no more wood shake shingles.’”

Some 40 years later, Payson finally got around to a ban on wood shake shingles.

After the Oakland Hills and Laguna Beach fires burned multi-million dollar homes in densely populated areas in the early 1990s, California passed further building codes requiring all new homes to have siding and roofing that can withstand burning for at least an hour.

“You have to have paper-backed insulation between the joist and roof or siding,” said Morel.

Attic vents must have screens small enough to withstand embers.

“If an ember hits a screen a quarter inch or larger, it burns down to the size of a matchstick and gets through to set the attic on fire,” said Morel.

The vents must also have clips to withstand the winds that accompany wildland fires.

Windows must have tinted tripled panes.

“Every new building has sprinklers ... you want to talk about pushback from the building industry,” said Morel.

Yet he made it clear the codes do not require a homeowner to upgrade an older home.

“The big fear when you start talking about WUI codes is retrofitting,” he said. “It’s only for new construction.”

Over the years, Morel has watched the evolution of California’s preparations for fire carefully, noting the ordinances and laws that helped neighbors enforce codes against neighbors.

“One of the biggest issues, I do everything right for wildfire protection and then embers from my neighbor start my house on fire,” he said.

“Here’s the key: How do I get my neighbor to comply?” he said.

Morel preferred working with cities, because the building inspector could hold residents responsible.

“With an unincorporated district, I have to go through the county or county attorney,” he said.

“HOAs have the inspection and enforcement to make it so you can literally stay in your home,” said Morel.

When Morel served as the fire marshal, HOAs hired him to do their inspections.

Still, the educational component has its ups and downs.

“The most frustrating thing as a fire marshal is to have a Firewise education event and — no one comes,” said Morel.

He would set up a booth at the annual Avocado Festival, but most of the 100,000 visitors were from out of town.

His fire council did it anyway.

“My inspectors would come back from trying to get the message out there discouraged,” he said. “I’d tell them, ‘It’s just getting one person at a time to understand the message.’”

His fire council worked with the local Citizen Emergency Response Team to create support and education programs specific to wildfires.

But the most effective pressure on people came from insurance companies.

As homeowner insurance claims due to natural disasters increased, the industry created the Insurance Institute for Business & Home Safety (IBHS). The IBHS controlled environments to re-create natural disasters, such as wildfires and hurricanes. IBHS then built homes and watched how materials performed.

Morel has participated in the controlled experiments that build a home then subject it to the ember storms created by wildfires. (https://disastersafety.org/)

These controlled experiments have shown that adding fire protection in the valley of roofs staves off spot fires in the leaves and pine needles that collect in those low spots.

“We know that is where debris is held and embers will land,” said Morel. “We require protection ... you have to have a class 8 roof ... for those houses built after 2003.”

Building according to WUI code and landscaping to Firewise standards lowers insurance rates. Morel had insurance agents meet him at homes to determine if it had “wildland fire survivability.”

But it’s also the small things that can make a huge difference when a wildfire races through a community.

“Put your trash cans in the garage,” said Morel. “We know it’s these little things that burn the house down.”

“The big fear when you start talking about WUI codes is retrofitting - it’s only for new construction.” Sidney Morel

“Here’s the key: How do I get my neighbor to comply?” Sidney Morel

In 2017, the Payson Town Council voted to require all NEW construction to have screens on attic openings and metal strips on low points where roof lines come together. The codes ban shake roofs.

Fire wise Codes Payson considered but did not adopt:

- Thin or trim groups of trees so the continuous canopy is not more than 30 feet in diameter, with 10 feet of clearance with the next tree or group of trees.

- Prune trees that overhang a building to create at least four-feet of clearance from the building or roof.

Fire wise for the zone 30-100 feet from any structure:

- Prune the lower branches of trees to at least six feet above any ground vegetation.

- Group ground cover vegetation to cover no more than 200 square feet, with 10 feet of separation between groupings.