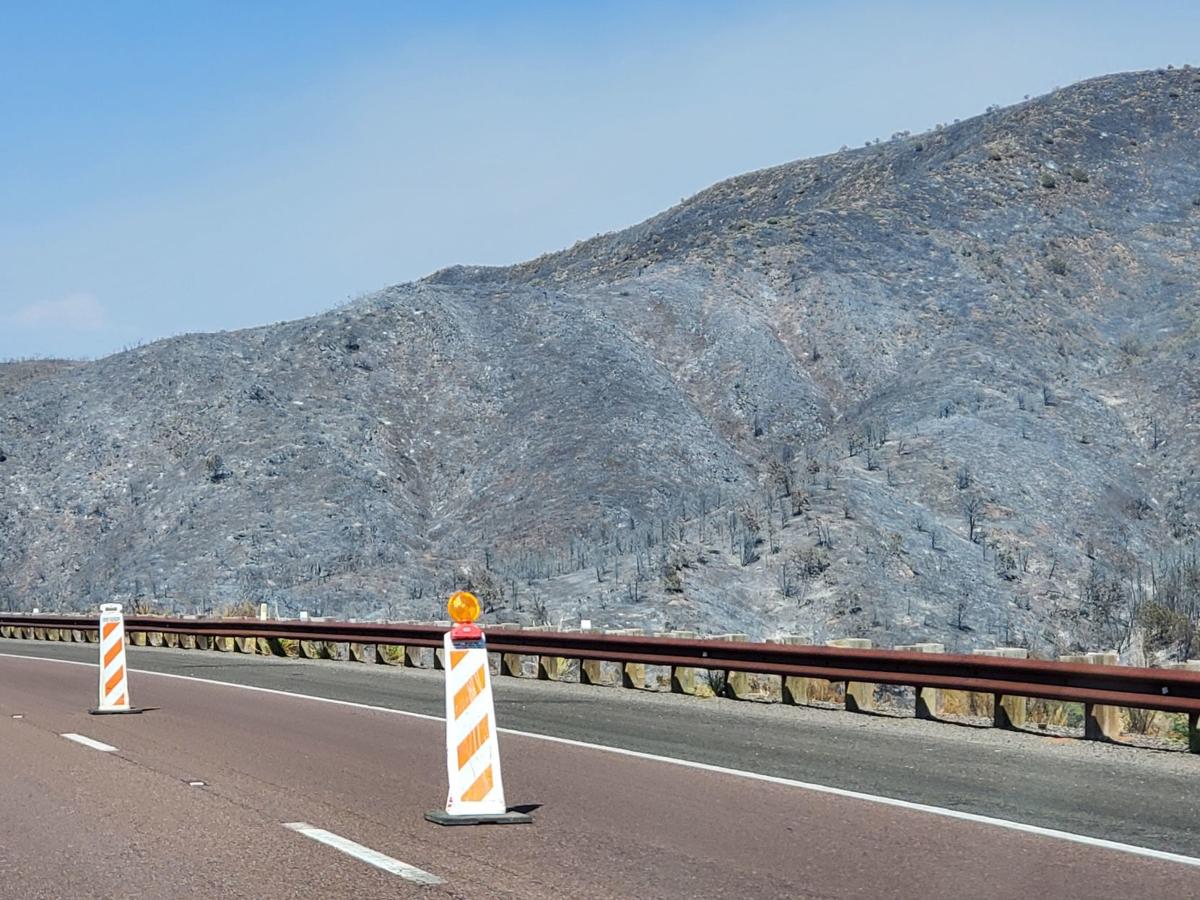 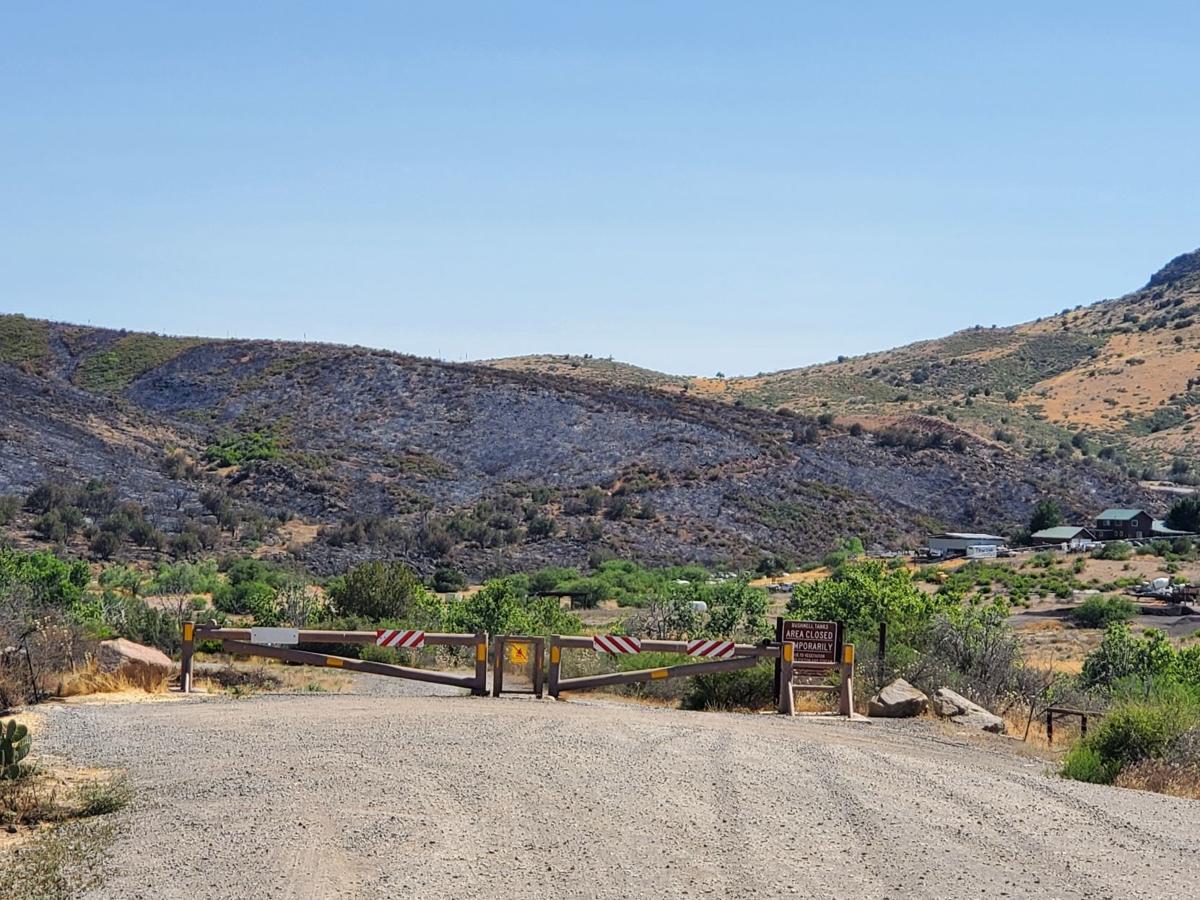 The Bush Fire charred the landscape along State Route 87, including near Sunflower, where crews set backburns to keep the flames from reaching the small community. 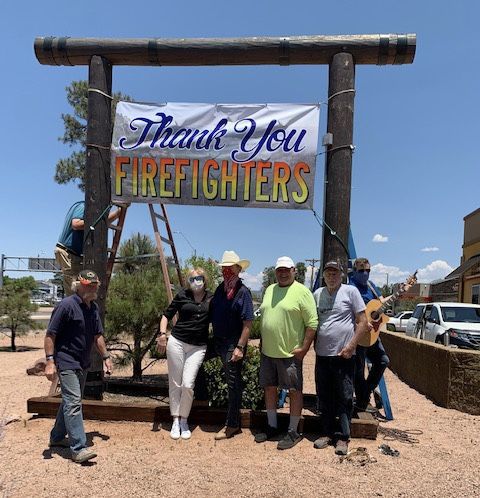 Volunteers this week put up a Thank You Firefighters sign at the old Carl’s Jr. location on the corner of State Routes 260 and 87. Pictured are Chick Doe (on ladder), Alan McKay, Kris and Tom Morrissey, Dave Golembewski, Kenny Rutland and Adriane Blanco. Also present, but not pictured are Lori Mills and Kathy Katy. 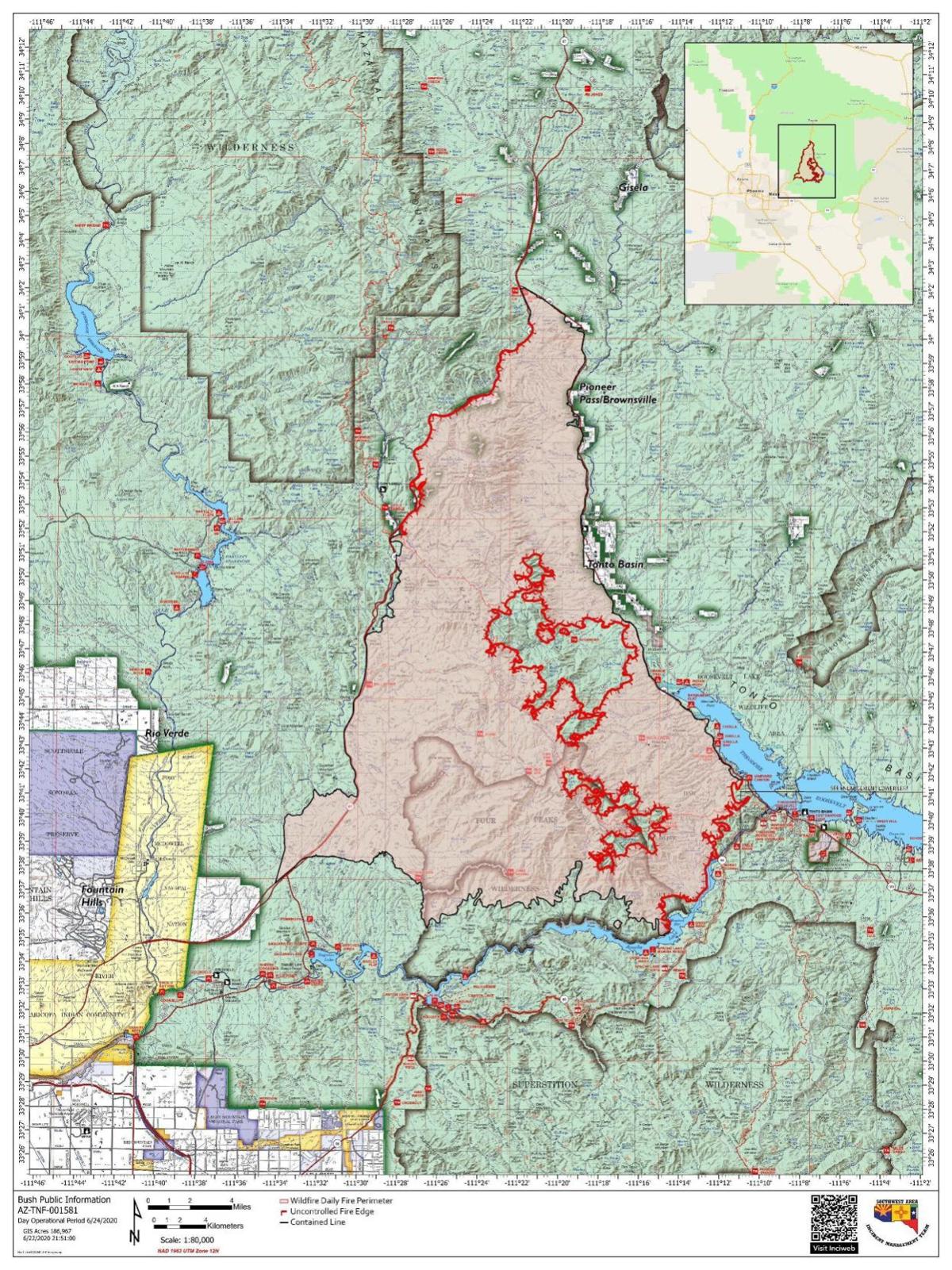 The Bush Fire charred the landscape along State Route 87, including near Sunflower, where crews set backburns to keep the flames from reaching the small community.

Volunteers this week put up a Thank You Firefighters sign at the old Carl’s Jr. location on the corner of State Routes 260 and 87. Pictured are Chick Doe (on ladder), Alan McKay, Kris and Tom Morrissey, Dave Golembewski, Kenny Rutland and Adriane Blanco. Also present, but not pictured are Lori Mills and Kathy Katy.

When the Beeline Highway opened Tuesday after being closed for more than a week it meant things were finally getting back to normal after the Bush Fire ripped through the area, charring nearly 190,000 acres.

Those who have driven on the roadway report nothing is the same.

Gary Morris, fire chief with the Pine-Strawberry Fire Department, headed down to the Valley shortly after the Arizona Department of Transportation opened the roadway Tuesday and said it was striking how the landscape on the west side of the highway was untouched, but on the east, nothing was left.

For miles and miles, just charred trees and soot.

He said he could see the fire had burned very hot in certain areas, burning up guardrails and leaving little in its path.

For many, the scenic drive from the Valley up the Beeline was one reason they loved living in Rim Country.

On the Roundup’s Facebook page, a Michigan resident commented that they had traveled on State Route 87 many times to visit family. “To me, this is one of the most beautiful and breathtaking drives I have taken. I cannot thank all the firefighters and all who took part in battling the Bush Fire.

Another reader, a local resident, said the “moonscape left behind by the fire goes on and on as we drove the 87 home yesterday.”

It will take years for the landscape to recover and teams are just beginning the work of analyzing what rehabilitation can be done. They are also looking at how the fire may affect the hydrology and which areas are prone to flood when the monsoon arrives. The Burn Area Emergency Response Team is doing an emergency assessment of the landscape the fire burned, looking at multiple things, including the risk to human life and safety, property, natural resources and cultural heritage sites.

“So this will be a combination of remote sensing, models, and working with our collaborators to take a look at what kind of precip we can be expecting to land on the burn scar, looking at what type of sediment delivery we can expect coming off of the burned area and what kind of increased water flow could be coming off of there,” said a member of the BAER team.

Officials closed the Beeline Highway south of Payson June 15 after the Bush Fire, which started June 13 northeast of Fountain Hills on the east side of the roadway, quickly ballooned to 14,000 acres.

Dee Hinton, a public information officer on the Bush Fire management team, said they have determined a vehicle fire was the cause. A motorist reportedly pulled over near the Sugarloaf Recreation Area after their vehicle overheated. The vehicle caught fire and flames quickly spread to the dry brush. The fire jumped the highway and raced up Four Peaks and along the ridges south of Tonto Basin.

The fire has continued to burn easily in the dry grasses and dense vegetation and as the Roundup went to press, several interior pockets were still on fire, including a large area west of Tonto Basin.

“One thing I want to mention to you that in the future, this is a large green what we would call an island. Everything in red is what has caught on fire and is now just smoldering. But everything in green is still green vegetation that can be consumed,” said Ralph Lucas, with the incident management team during a June 23 fire meeting. “It’s not a concern from a public safety standpoint. It’s more of a concern that we want to let you know that you will see glow, you will see smoke, and you may see flames up on the mountain for the next several days to come. But it is no concern as far as public safety.”

The fire also continues to creep south toward Apache Lake.

As of Thursday morning, the fire was 86% contained. Containment refers to the perimeter firefighters have established around the blaze, which it should not cross. State Routes 188 and 87 have acted as the largest containment lines. Crews have also dug trenches and used backburns to keep the fire from passing.

At the June 23 meeting, officials reported things were looking good as they transitioned to reopening the roadways and letting residents back in their homes.

“Everything is going real well on the Bush Fire,” said Lucas. “We do understand that personal travel and public travel as well as commercial travel is pivotal along that corridor between Payson and Scottsdale. So that is open.”

He asked motorists to be mindful as crews are still working along the roadways.

“So please ensure that you’re paying attention on driving,” said Alan Sinclair, incident commander. “Slow and low will be the tempo. And you need to keep that firefighter safety as your No. 1 priority.”

Tonto National Monument reopened Wednesday following a brief closure because of danger from the Bush Fire. Restrictions remain in effect because of the COVID-19 pandemic.

Tonto National Monument will now be open seven days a week and will allow access along the entrance road and provide viewing areas from the visitor center parking lot.

As part of the phased reopening, entry fees are waived. Hours of operation are 8 a.m. to 5 p.m. Visitors can view the Lower Cliff Dwelling, Roosevelt Lake, and learn about the monument from waysides from the parking area. The Upper Cliff Dwelling Scenic Overlook off Highway 188 remains open. Staff will be available outside the visitor center to provide park brochures, junior ranger books, and other information upon request.

Drove the Beeline before dawn to Scottsdale and back today to my home in Haigler Canyon. The steel grey, sheer denuded mountain sides of Mt. Ord were startling after dawn. Alien. The cherished view of the beautiful saguaro forest southeast to Weavers Needle in the Superstitions broke my heart. Been up and down that road a hundred times plus since the sixties and shudder to think of the wasteland up and over 4 Peaks to Roosevelt Lake. Thank God the professionals stopped the fire before it raced up Tonto Creek. Heroes, the best of the best. Thank you.