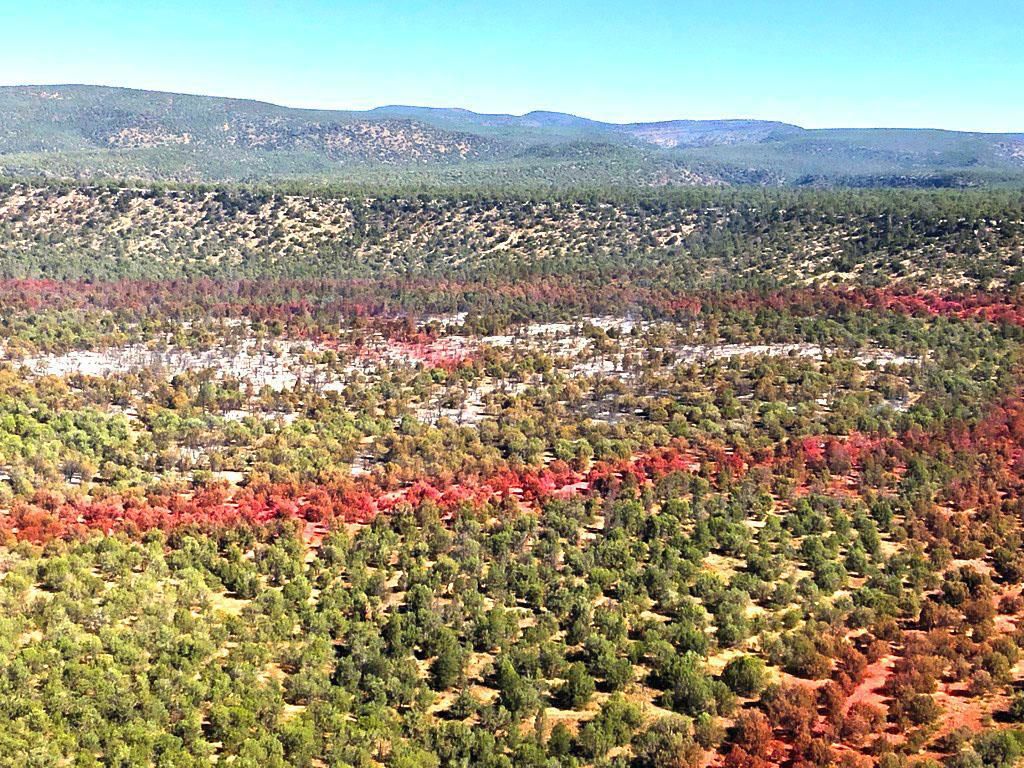 Airtankers have dropped retardant around the Polles Fire to help contain it.

Officials said they were dedicating their firefighting efforts on the Polles Fire in helicopter pilot Bryan Boatman’s honor after he was killed delivering supplies to crews on the northern end of the fire Tuesday. Firefighters Tuesday stand at attention as Boatman’s body is airlifted to the Tonto Natural Bridge.

Airtankers have dropped retardant around the Polles Fire to help contain it.

Officials said they were dedicating their firefighting efforts on the Polles Fire in helicopter pilot Bryan Boatman’s honor after he was killed delivering supplies to crews on the northern end of the fire Tuesday. Firefighters Tuesday stand at attention as Boatman’s body is airlifted to the Tonto Natural Bridge.

After winds initially pushed the Polles Fire northeast for a few tense days, crews on Thursday reported marked containment on the 572-acre fire west of Payson.

As of Thursday morning, the fire was 61% contained.

There has been no reported growth on the fire since Sunday evening.

In a briefing Wednesday, Pierson said, “Today is really dedicated from (the firefighters) to the family and firefighter family of BJ Boatman, the pilot that we lost yesterday.”

Pierson said they felt very confident with containment on the southern end of the fire and crews were focusing their efforts on hotspots on the north end toward Rock Creek Canyon.

In a briefing Thursday, Rocky Gilbert, an operations chief, said crews made excellent progress on Wednesday, and they were looking for any final hotspots.

“We are getting the fire buttoned up,” he said, saying they would start taking crews off the fire starting Thursday as they work toward handing the incident back over to the Forest Service.

Officials earlier in the week reported the fire was burning through manzanita and juniper. While crews had cut lines, spot fires were starting ahead of those thanks to winds carrying embers.

With high winds and hot temperatures predicted and the fire on a northeastern path, officials decided early in the week to do prep work in and around the Tonto Natural Bridge, Pine-Strawberry and Arrowhead Estates in the event the fire made a run toward any of these communities.

Crews cleaned up Forest Road 209 in case they need to bring in heavy equipment; completed structure protection around Arrowhead Estates and evaluated and improved established fuel breaks south of P-S in the “rare event” the fire jumps the lines, Pierson said.

The fire is burning near the Arizona Trail in the wilderness area.

It is only accessible by helicopter.

In a briefing on Wednesday, officials said Hotshot crews, with the support of airtankers and helicopters, continue their efforts on the fireline.

“They are working directly as safely as possible, along a patchy mosaic of vegetation with varying levels of heat still present. These variations have made the process of containing the fire challenging, as firefighters continue to find heat that could weaken containment lines if high winds were present. As absolute certainty in the security of the containment lines and features is attained, containment percentages will begin to grow.”

As of press time, the communities of Pine-Strawberry and Payson faced no threat from the Polles Fire.

The Tonto Natural Bridge State Park has been closed because of the fire.

To sign up for emergency community alerts, visit readygila.com.

Thankyou fire fighters for all you do. Peace & still waters be with Bryan Boatman and family.