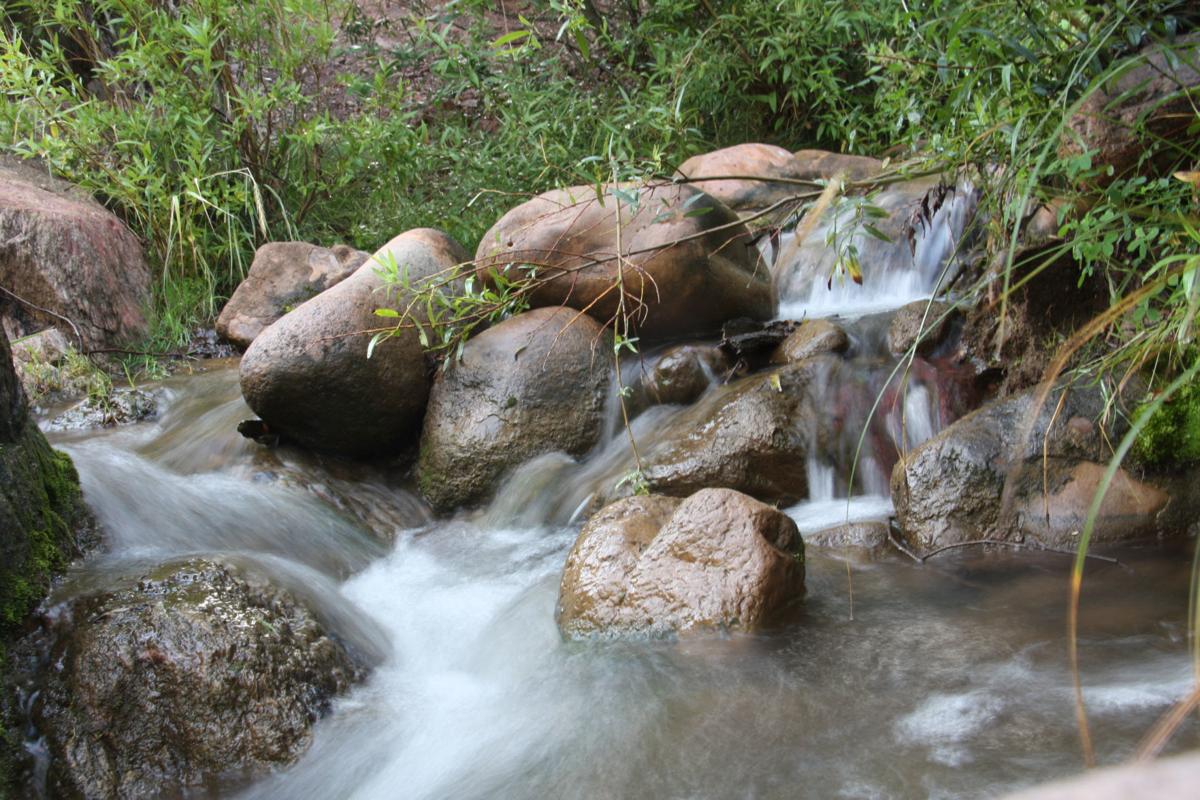 Some 27 percent of the 21,000 acres of riparian areas and wetlands in the 1.2 million-acre study area are already in “poor” condition, according to an environmental impact statement. 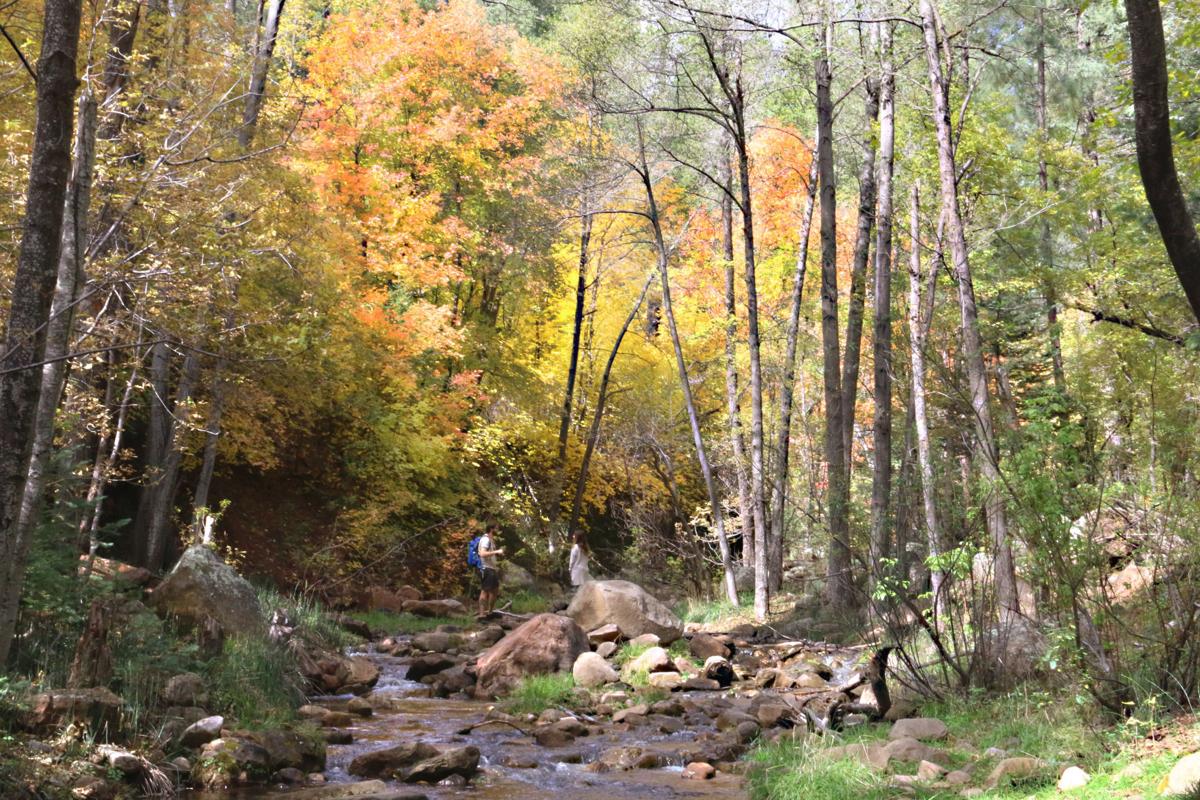 Some 27 percent of the 21,000 acres of riparian areas and wetlands in the 1.2 million-acre study area are already in “poor” condition, according to an environmental impact statement.

We’re all like a happy family on a late summer day, splashing about in the clear, cool waters of the East Verde River — in the narrows of Water Wheel.

The water’s making a soothing sound. The wind’s rustling through the trees. Trout dart in the pools. An eagle circles overhead. What could go wrong on such a beautiful day?

Except just upstream, the steep slopes on the face of the Rim have barely stopped smoldering after the fierce passage of the Highline Fire. Just above the Rim, a sullen black slug of monsoon clouds has gathered. Back in July 2017, those clouds opened up and dropped several inches of rain on the seared slopes. The storm unleashed a debris flow — which swept down Ellison Creek and into the East Verde. The black wall of logs and mud swept away an extended family of 10, scattering their bodies miles downstream.

It seemed like a freak storm — a tragedy impossible to predict.

But actually, it was just a portent of things to come.

The streams and watersheds of Rim Country and the White Mountains face just such a potential for disaster, according to the environmental impact statement (EIS) for the 1.2 million-acre Four Forest Restoration Initiative Rim Country project.

They’re already struggling — and likely to get lots worse.

In this installment of our special series on the effort to save Arizona’s forests through a mix of thinning, logging and prescribed burns, we’ll look at the danger faced by the region’s streams and watersheds. They sustain the wildlife, forested towns like Payson and Show Low and even millions of Valley residents.

However, a century of mismanagement has converted the once fire-adapted, low-density, diverse forest with 50 or 100 trees per acre into a tinderbox, with 1,000 trees.

The most vital ecosystem in that forest faces the greatest danger.

Turns out, some 27 percent of the 21,000 acres of riparian areas and wetlands in the 1.2-million-acre study area are already in “poor” condition, according to the EIS, now available for public study and comment on the Forest Service’s 4FRI website. Another 58 percent are in “fair” condition.

The study area includes 4,200 miles of stream courses — but most only carry water after a rain. The area includes 667 miles of intermittent streams and only 169 miles of permanent streams like the East Verde, Tonto Creek, Haigler Creek, the White River, Silver Creek and the Black River.

However, those riparian areas remain critical to some 80 percent of the wildlife.

Step back from the stream and consider the condition of the watersheds themselves. Those watersheds supply the reservoirs and water tables.

However, only 15 percent are rated as “functioning properly.” Some 83 percent are considered at risk, which means the streams drying up or silting up. The slopes are prey to dangerous erosion, the soils are washing away or wildfires have caused worrisome changes in water absorption and runoff. Some 2 percent of those watersheds are considered “at risk,” according to the EIS.

Most of them carry a dwindling amount of water thanks to that increase in tree densities. Many also face problems with water quality, including bacteria, metals and other pollutants caused by faltering septic systems or runoff from urban areas and mine tailings.

Even the soil is in trouble. The tree thickets keep the sun from hitting the forest floor and have piled up 20 or 30 tons of pine needles and branches on almost every acre. A fire or other disturbance that breaks through that matter would leave the rootless soil prey to erosion, according to the EIS.

Some 70,000 acres in the study area already has “impaired” or “unsatisfactory” soil conditions.

Now, that all sounds bad.

For starters, the seared soil can no longer absorb water normally. As a result, erosion can increase a thousandfold in the wake of a high intensity fire.

After the Schultz Fire caused a monsoon flood that wiped out dozens of houses and killed a little girl, Flagstaff did a study on what a similar fire on the forested slopes above the city would produce. The answer: A billion dollars in flood damage that could wipe out Flagstaff’s historic downtown.

Such a flood can fill in reservoirs. Denver spent hundreds of millions dredging a city reservoir after a wildfire. Storm models suggest that Flagstaff’s Lake Mary, Payson’s C.C. Cragin Reservoir and even Salt River Project’s Roosevelt Lake could all suffer flooding.

Finally, the floods that follow a high intensity crown fire can smother streams with silt and debris. That’s what happened to Dude Creek after the Dude Fire nearly 30 years ago. Arizona Game and Fish had even introduced a population of native Gila trout into that stream, but silt after the Dude Fire wiped them out.

So will a combination of thinning and controlled burns get us out of this mess?

Not without some short-term damage, concluded the EIS.

The thinning projects would involve a lot of soil disturbance as loggers cut down many of the trees smaller than 18 inches in diameter, load them onto trucks and haul them away on hundreds of miles of new, temporary roads.

The EIS listed all kinds of short-term impacts from the preferred Alternative 2, which would treat 900,000 acres with a combination of thinning projects and controlled burns. The alternative would also disturb 61,000 acres by building roads and other infrastructure to support the massive increase in thinning projects. The treatments would also restore 184 springs, restore stream habitat along 777 miles, decommission 1,300 miles of roads, construct 300 miles of temporary roads, and put up 200 miles of protective barriers around springs and groves of aspen, native willows and big-toothed maple.

But that’s nothing compared to doing nothing.

The analysis estimates that at least a third of the forest will suffer high-severity crown fire burns in the next 20 years if nothing is done.

The fire danger’s likely to get much worse — and not just because of the tree thickets.

The overwhelming scientific consensus predicts a roughly 8-degree increase in average temperatures in Arizona by the end of this century in part because of human activities that have increased heat-trapping gases in the atmosphere, concluded the EIS.

Some studies have suggested a steady rise in temperatures could change high-altitude weather patterns in a way that could eliminate or diminish the Arizona monsoon. Without the monsoon, the fire season would dramatically increase.

Other studies have suggested the increased energy in the atmosphere could actually suck up more water from the ocean and increase rainfall in some areas.

Most likely, we face a future with hotter days, a smaller snowpack, longer droughts and more extreme weather. All that could make the shift to an era of mega fires worse.

“While the future of climate change and its effects across the Southwest remains uncertain, it is certain that climate variability will continue to occur across the project area — with higher probabilities of extended drought, which can lead to dramatic effects on the landscape.”

Just keep that in mind, next time you sit next to a mountain stream.

Listen to the water burble. But keep your eye on the sky.

You may not see it now — but trouble’s brewing upstream.